Is this tiny projector a great LAN party partner? 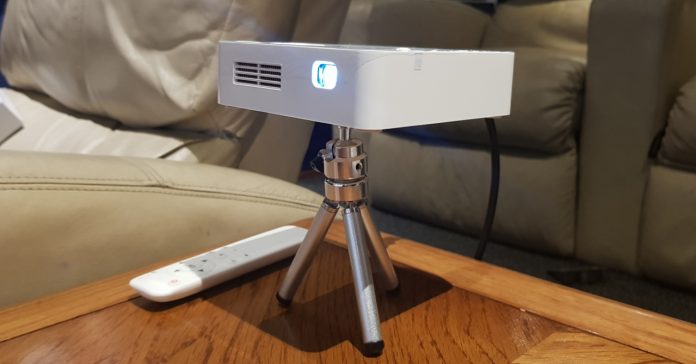 When you’re having a LAN party or a movie night with friends, a TV might not be big enough, especially if there are a lot of guests. For parties like these, a projector is a much better display solution. One projector that’s interesting is Acer’s new C202i DLP projector; it’s far from your typical LCD projector as it’s incredibly tiny and has an internal battery! This should mean that it’s a great choice if you’re on the lookout for a portable projector.

As it’s a tiny device made for portability, is image quality still up to par compared to larger projectors? And does it actually do well for gaming/binge-watching? We find out in our review of the Acer C202i projector: 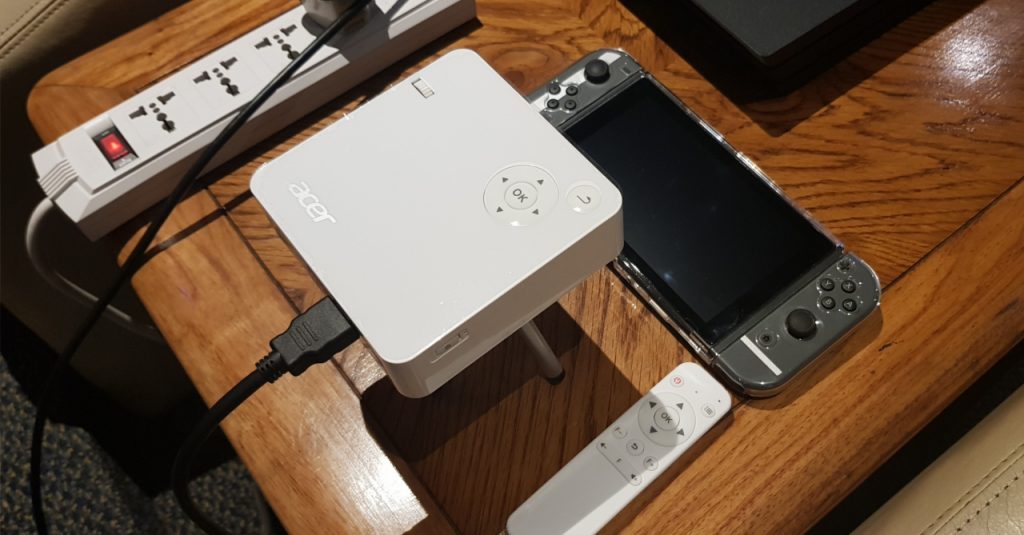 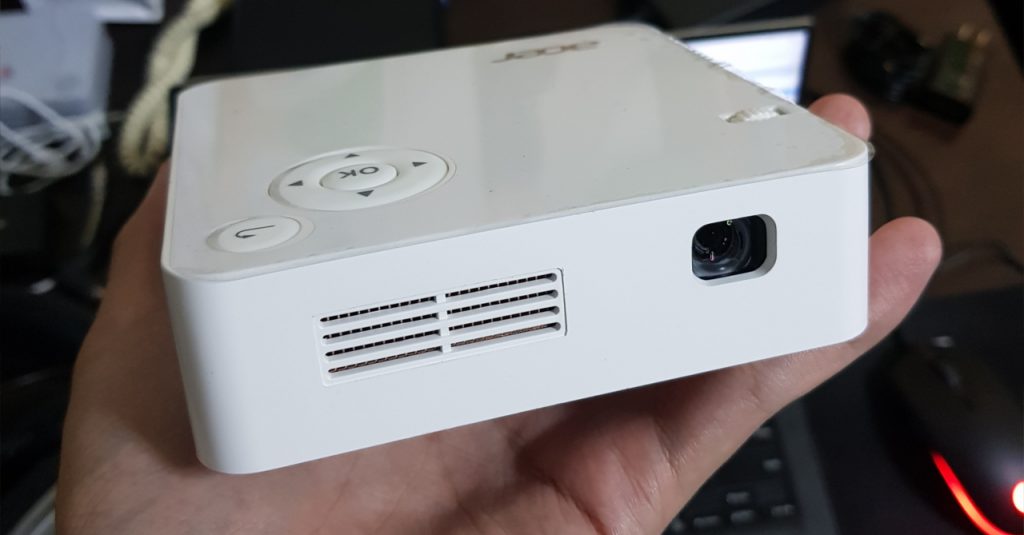 I’ve mentioned above that the C202i is one tiny device, I wasn’t kidding. Just look at how small it is (in the image above); the projector easily fits in my hand! Aside from being tiny, it’s also light at only 350g as it packs LED lighting instead of a heavy bulb. This also means that the projector has a lifespan of up to 30,000 hours. 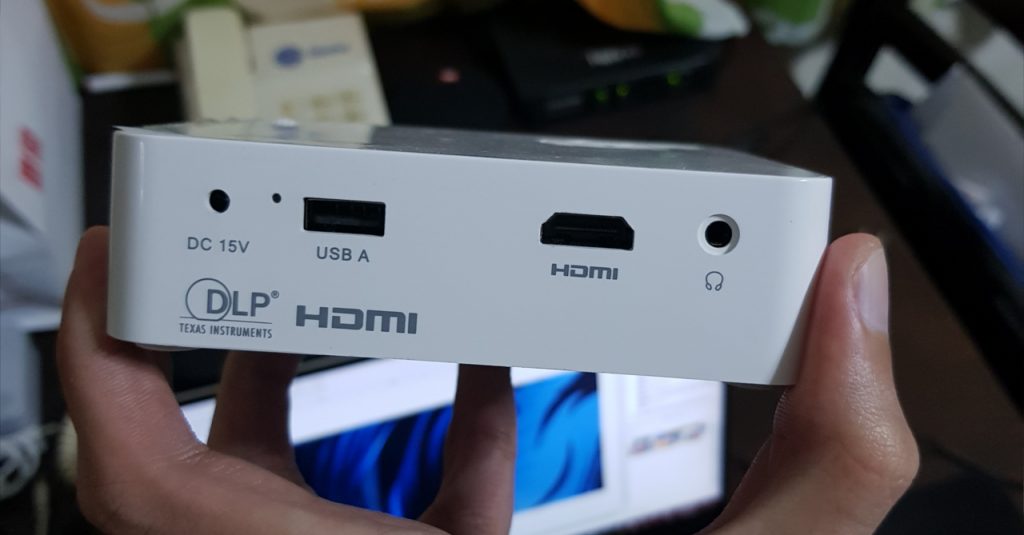 Even though it’s tiny, the C202i still manages to pack decent I/O options, including a USB Type-A port, and HDMI port, and a 3.5mm jack. The C202i is also powered by DLP technology, the same tech used in digital cinema projectors. 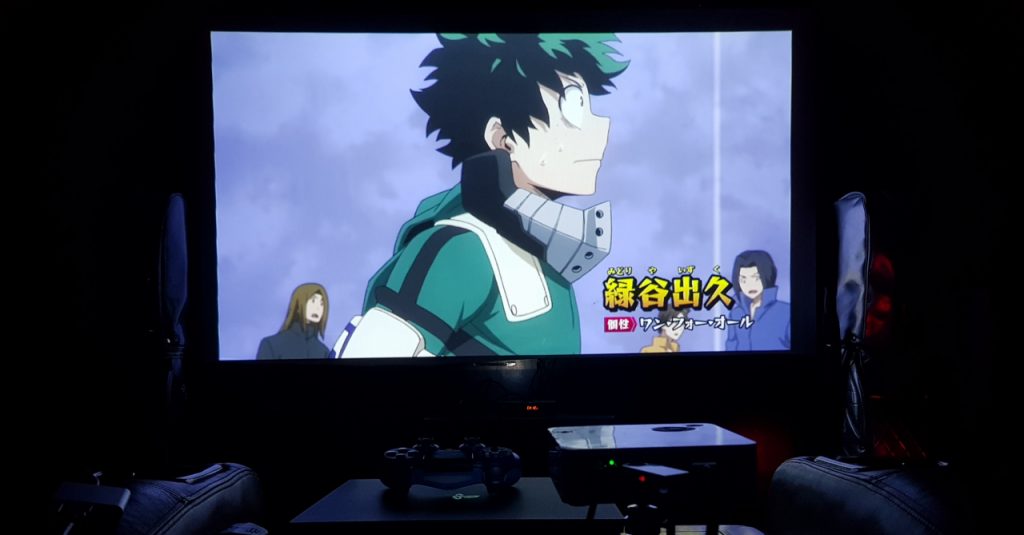 Now we move on to actual use of Acer’s new projector. We first tested it out by watching some anime, and it was actually pretty decent. While it’s far from the best given its 854 x 480 native resolution, the projector’s output was watchable, provided of course that you’re don’t sit too close.

One issue that we experienced when watching anime is that if you watch through a USB flash drive, the files must have hardcoded subs. If not, the projector won’t display subs as it doesn’t support separate subtitle files. If you’re gonna use the projector for anime, we recommend using a laptop and connecting it through the HDMI port instead. 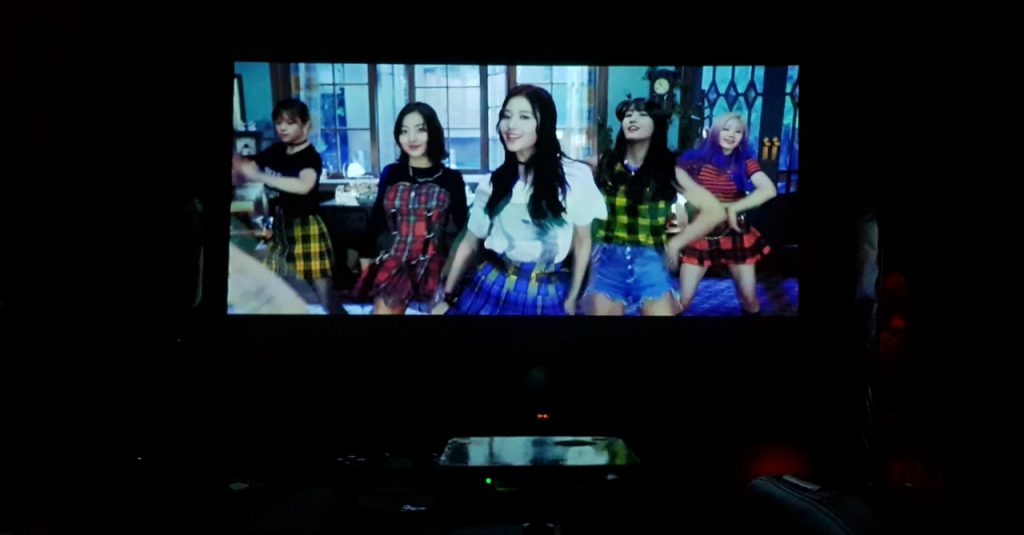 For live action videos such as movies (or a music video in our case), the C202i’s output is a bit dull, with colors not popping out as much as we’d like. Again, the projector’s ouptut isn’t the best, but if you sit a bit farther back, it should be watchable. Overall, the Acer C202i for video is just fine. It won’t replace a dedicated home projector anytime soon, but for a portable projector, it’s pretty decent. 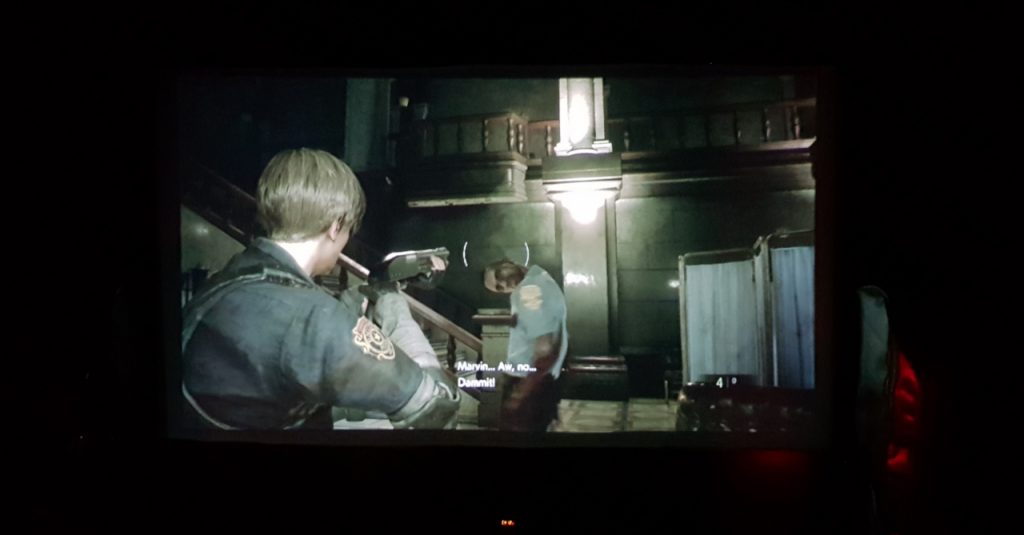 For gaming, the C202i wasn’t all that impressive, especially for triple-A PS4 titles. We first tried out the Resident Evil 2 remake, and it wasn’t a great experience. As the game was dark, the projector’s output of RE2 was a bit blurry and lacked clarity. We won’t recommend playing games with great graphics on this projector.

A surprising thing about the C202i though is that it works pretty well with Nintendo Switch games. As Switch games are designed to play well on the console’s 720p display, the low resolution of the C202i wasn’t as apparent when compared to PS4 games. So if you’re planning to hold a Smash/Mario Kart LAN party, or are going to play Breath of the Wild, the C202i works as a display option. 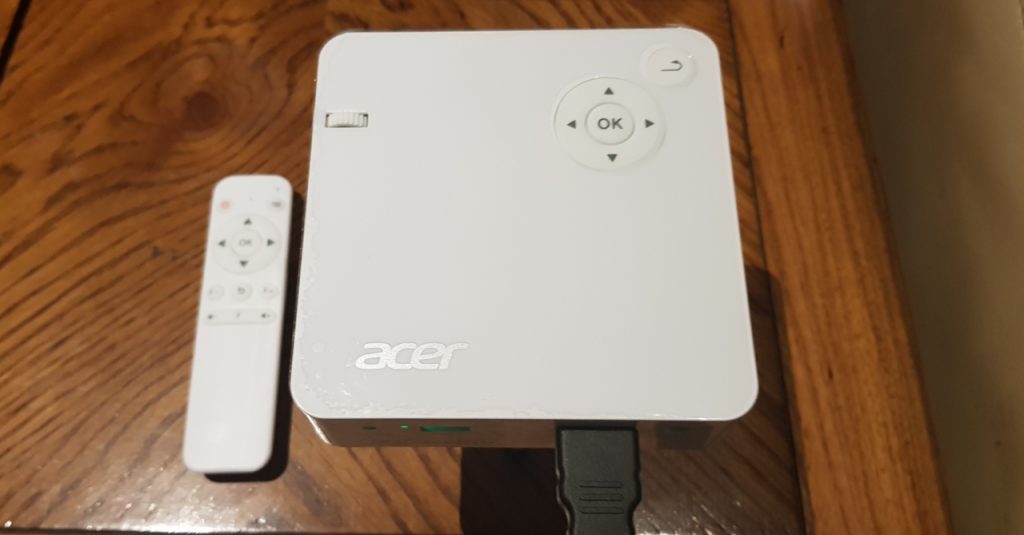 Acer bills the C202i as a portable projector that works well for presentations. For that use, the device passes with flying colors. Even with it’s small size, the C202i’s image quality is more than good enough for PowerPoint presentations. The projector is also easy to use as adjusting focus and keystone is easily done through the included remote. It even automatically adjusts the output, so you won’t even have to adjust the settings at times.

Aside from being a good projector for productivity, the C202i also has a couple of other excellent features such as its 9,000mAh battery. With a battery of that size, the projector could last for around 3 hours of standard use without being plugged in. Plus, it can double as a power bank for your device. 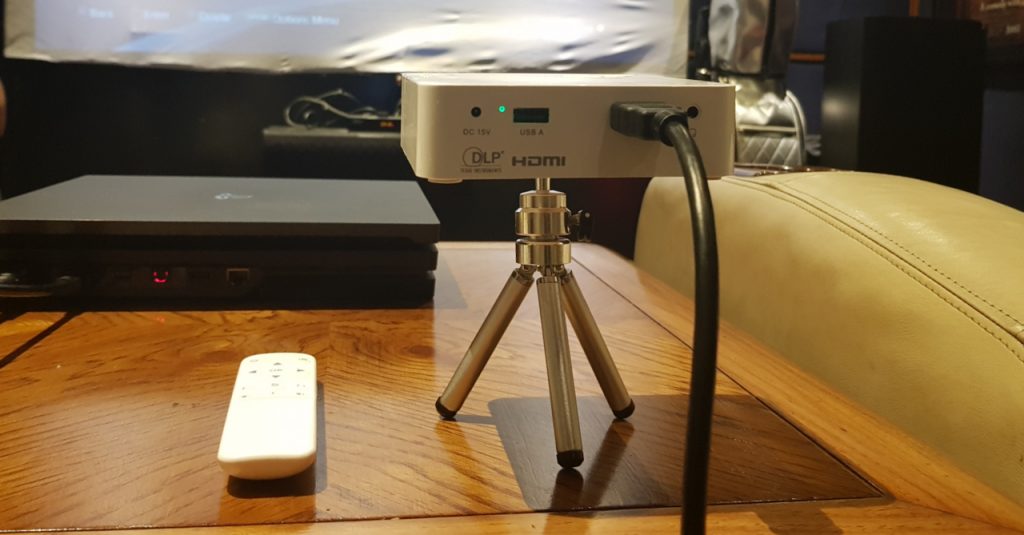 While it does a lot of things great, the C202i has a few glaring drawbacks, the biggest being it’s tripod. The tripod is too small, leading to some difficulty with getting the projector to stand at just the right angle. There’s also the fact that the projector is so small and light that connecting a thick HDMI port can easily move it out of position.

Then there’s connectivity. Using the USB and the HDMI port is relatively easy, but the other connectivity options such as the wireless EZCast feature is unintuitive and finicky to use. The C202i also packs an onboard speaker, but it doesn’t get sufficiently loud, meaning that an external speaker is a must. 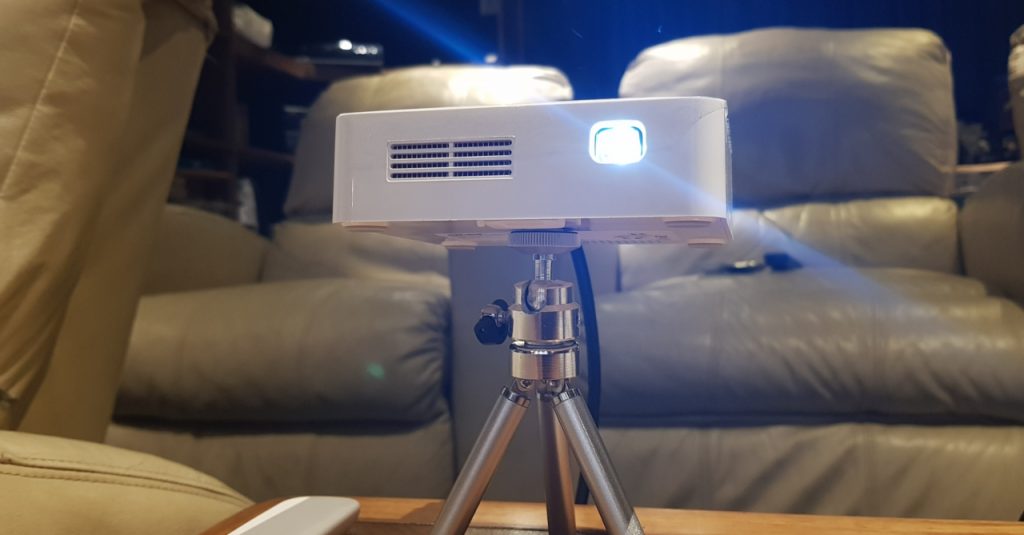 The Acer C202i is not all that impressive quality-wise compared to dedicated multimedia projectors. Though it’s unfair to compare the C202i to larger projectors, after all, sacrifices have to be made to make it as portable as it is (such as only having an 854 x 480 native resolution).

Factoring in how small it is though, the C202i is a good pick. While it doesn’t have the best quality for movies/anime and video games, it does well enough for a portable projector. What’s surprising though is how great it does with Nintendo Switch games such as Breath of the Wild or Super Smash Bros. Ultimate.

Overall, if you’re in the market for a portable projector, the C202i is something worth looking into. Even with its drawbacks, it works well in its intended use for presentations, and does decently well for multimedia playback. Just don’t expect it to perform as well as standard size projectors.

As a portable projector, the Acer C202i is pretty good. Sure, it might not have the best quality for movies/gaming, but it should work decently for LAN parties, especially if you're playing Nintendo Switch games. And for presentations, it's a great projector to have. Geek Lifestyle Review: Acer C202i DLP Projector