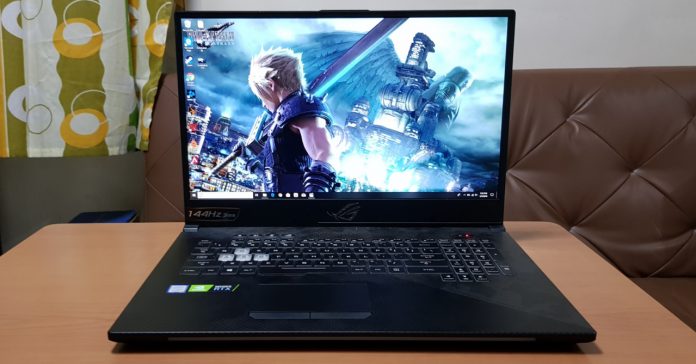 Last November, we reviewed the ROG Strix GL504GM SCAR II, ASUS’ gaming laptop made for avid FPS players. Recently, we got our hands on an updated SCAR II, specifically the GL704GW. Not only does this new SCAR II have a larger display, it also has an updated graphics card — an NVIDIA RTX 2070 to be exact!

Aside from the larger display and more powerful hardware, this new SCAR II seems to be identical to the previous model. So do the upgraded internals make this laptop a better deal? We find out here in our review. 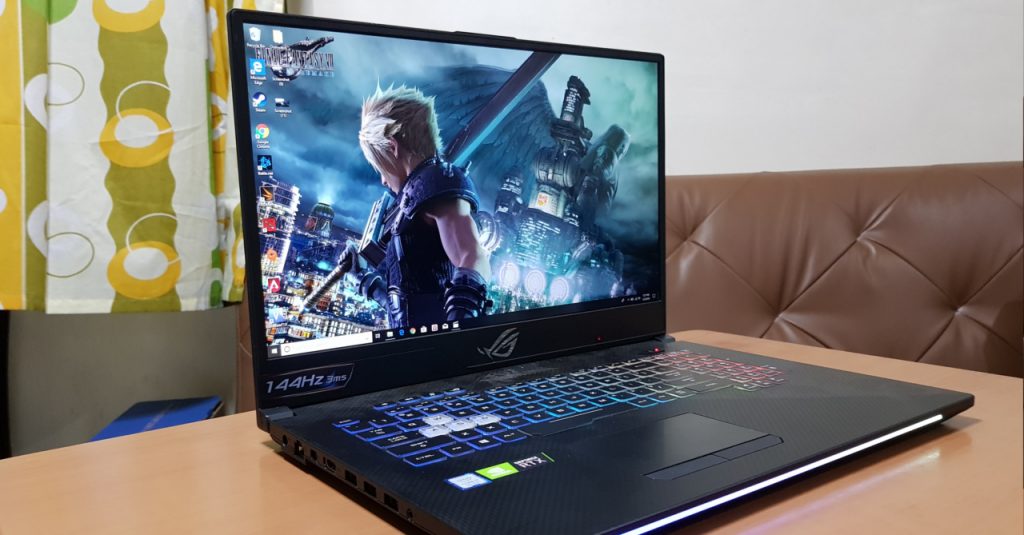 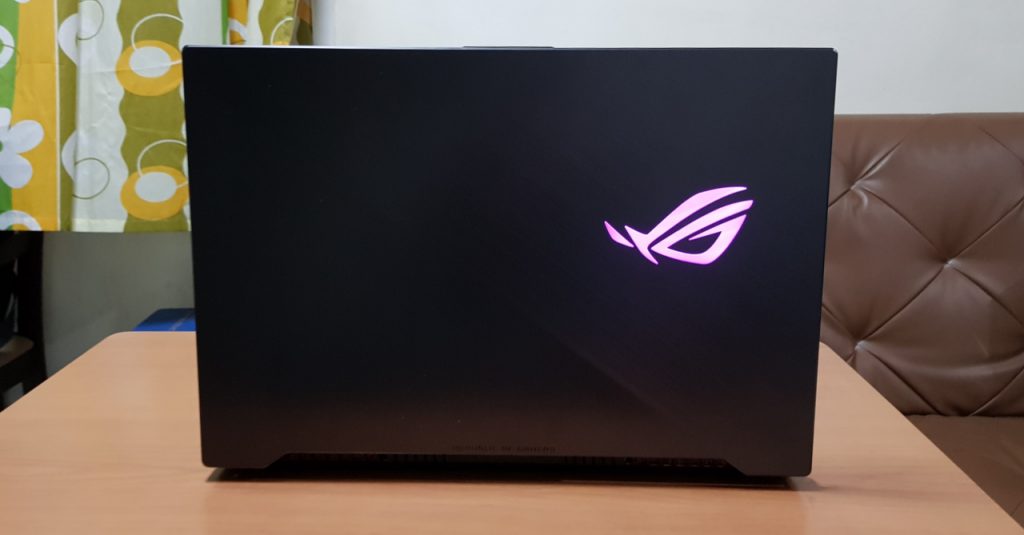 As I’ve mentioned earlier, the GL704GW looks almost exactly like the previous SCAR II model, only bigger. This means that this SCAR II has a metal build with a more edgy design than the first-gen SCAR. Personally, I’m a fan of the design; even if it looks very much like a gaming laptop, it still has a bit of subtlety to it (just a bit). 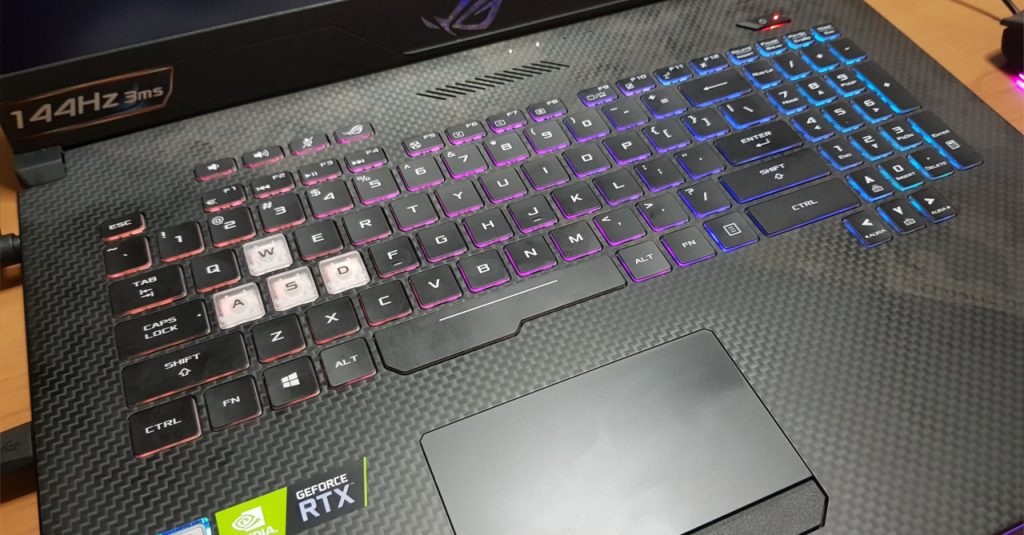 Opening up the laptop, you’ll see that the laptop has an RGB keyboard (with highlighted WASD keys) as well as a carbon fiber-like finish. The carbon fiber-finish looks pretty good, though I’m not a fan of the camo pattern at the upper right side of the body. As mentioned in the previous SCAR review, it “kinda looks like a dry spilled milk from afar.” 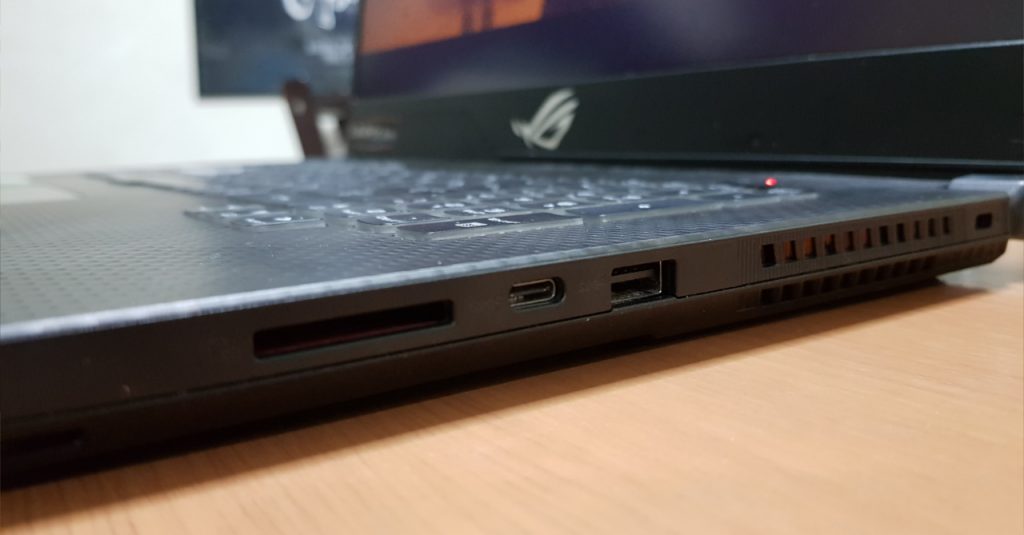 While the camo pattern won’t wow everyone, what will impress users is the laptop’s I/O. As the GL704GW is a fairly large laptop, ASUS managed to fit a wealth of I/O options. At the right side, the laptop has an SD card reader, a Type-C port, and a USB Type-A port. 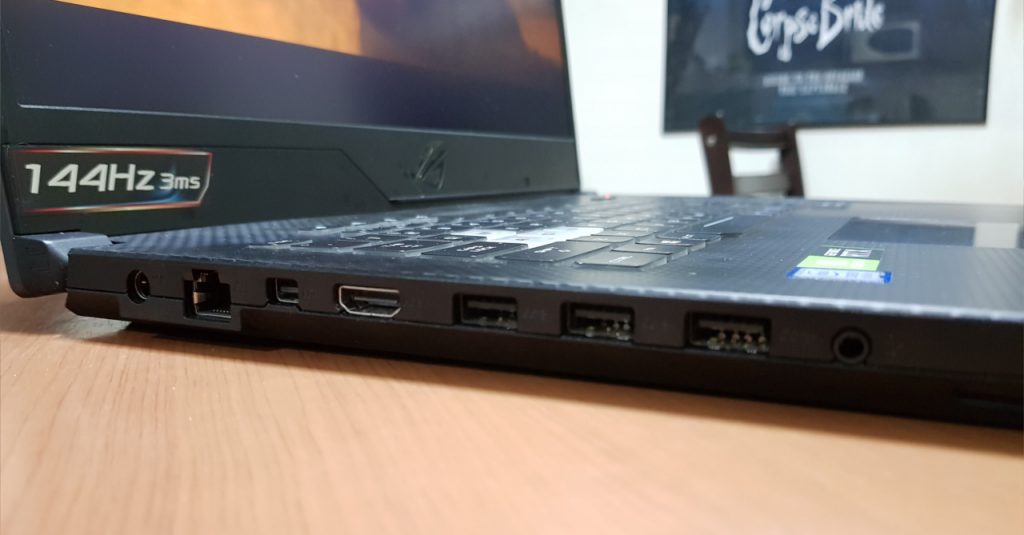 At the left is the power jack, an ethernet port, a Mini DisplayPort, an HDMI port, a headphone/mic jack, and three more USB Type-A ports. This is no doubt one of the best gaming laptops when it comes to number of input/output ports. 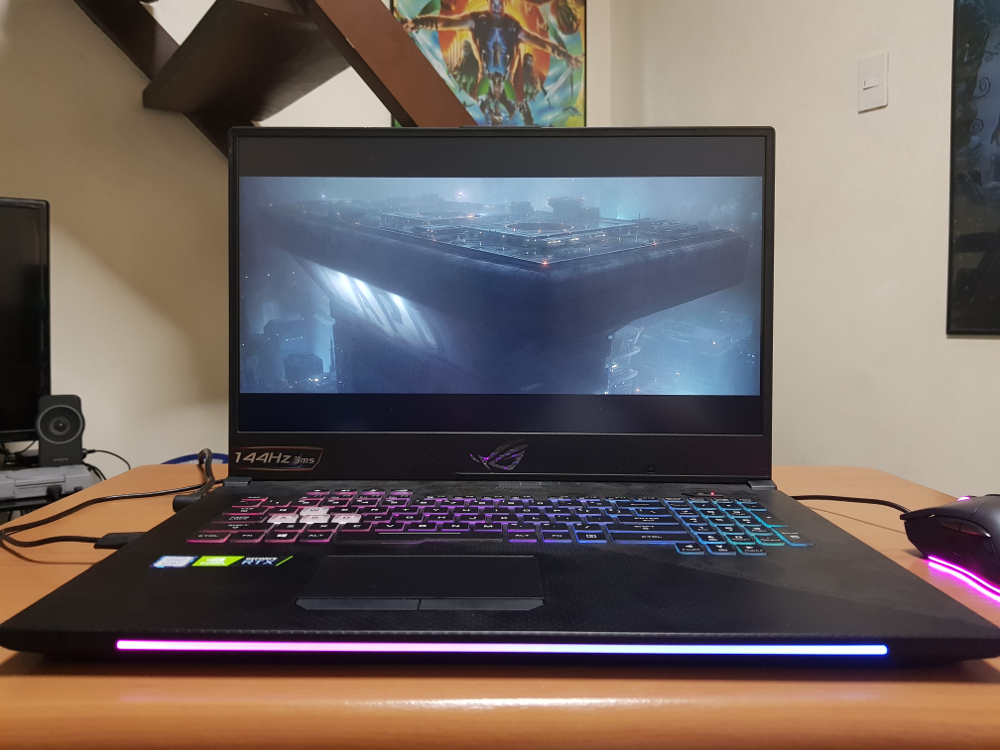 ASUS’ latest line of higher-end gaming laptops have been outfitted with 144Hz refresh rate displays, the GL704GW is no exception. The laptop comes with a 17.3-inch Full HD 144hz display with a response time of 3ms. This means that it should be great for gamign, but what about binge-watching movies/tv series?

For that purpose, the SCAR II is pretty good. Colors are fairly punchy and it gets bright enough for watching even with a good amount of indoor lighting. One of the few flaws of the display for binge-watching is that it’s not exactly the sharpest display out there. But still, it’s display should be good enough for most users. 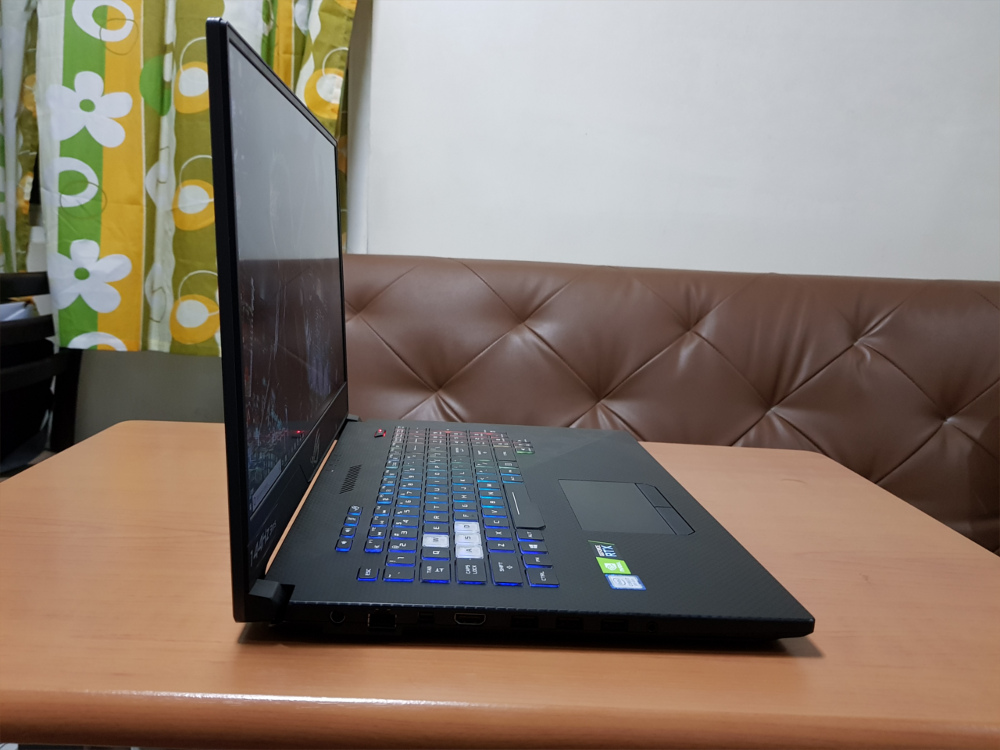 This new SCAR II’s audio performance is decent. What’s surprising is that the audio quality is fine even at max volume. On the flipside though, the GL704GW’s onboard speakers don’t get that loud. For gaming/binge-watching, external speakers and/or headphones are highly recommended.

ASUS’ GL704GW features a full-size RGB keyboard, complete with a numpad. For a gaming laptop, the SCAR II’s keyboard is just fine. It provides a nice tactile feel when typing/gaming, though I wouldn’t call it the best among the other gaming laptops I’ve tried. Still, the keyboard should be good enough for most gamers, unless he/she has been spoiled by mechanical keyboards that is. 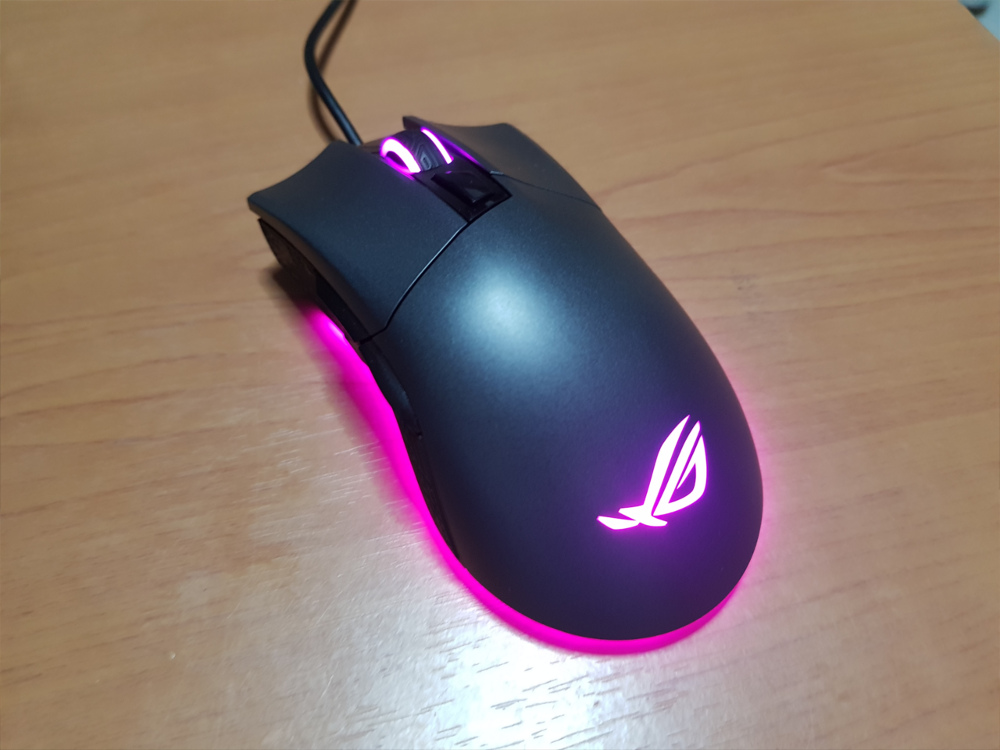 One good thing about the GL704GW is that it comes with an ROG Gladius II mouse for free. Thanks to this freebie, users won’t have to buy a separate mouse to game right away.

With an NVIDIA RTX 2070 under its hood, I expected the new SCAR II to easily run almost every game I threw at it; and for the most part, it did. Less demanding games such as Dota 2, Overwatch, and Apex Legends all ran at max settings with framerates of 80 and above without a hitch. Playing these games on the laptop was made even better thanks to the 144Hz display, meaning you’ll actually be able to see the difference when you reach over 60 FPS.

As an RTX 2070-powered laptop, I of course had to try out a game with ray tracing. Right now only Battlefield V had ray tracing available, so I tested out the game, first with ray tracing set to medium and another run set to ultra. On the medium ray tracing setting, BFV ran at around 80FPS, with occasional dips to 60 (which wasn’t too noticeable). On the ultra setting though, the game ran at only 30 FPS.

So is the max ray tracing setting worth the big FPS hit? Not really. Sure, the ultra ray tracing setting looks better in screenshots (just look the way the raindrops are illuminated in the image above), but you won’t really notice it much during actual gameplay.

Ultra ray tracing setting aside, almost all the games I’ve tried ran well on near max settings, except for Rise of the Tomb Raider. For some reason, the game only averaged 66 FPS on the in-game benchmark tool. The RTX 2070 should be able to run the game much faster, but in my tests, the GTX 1070-powered Zephyrus M ran the game better.

Another issue that I encountered is that the space at the top of the keyboard got a bit warm when playing games after a while. It’s far from a dealbreaker though, as you won’t really feel it when playing normally; it’s just a possible concern when playing a marathon gaming session. 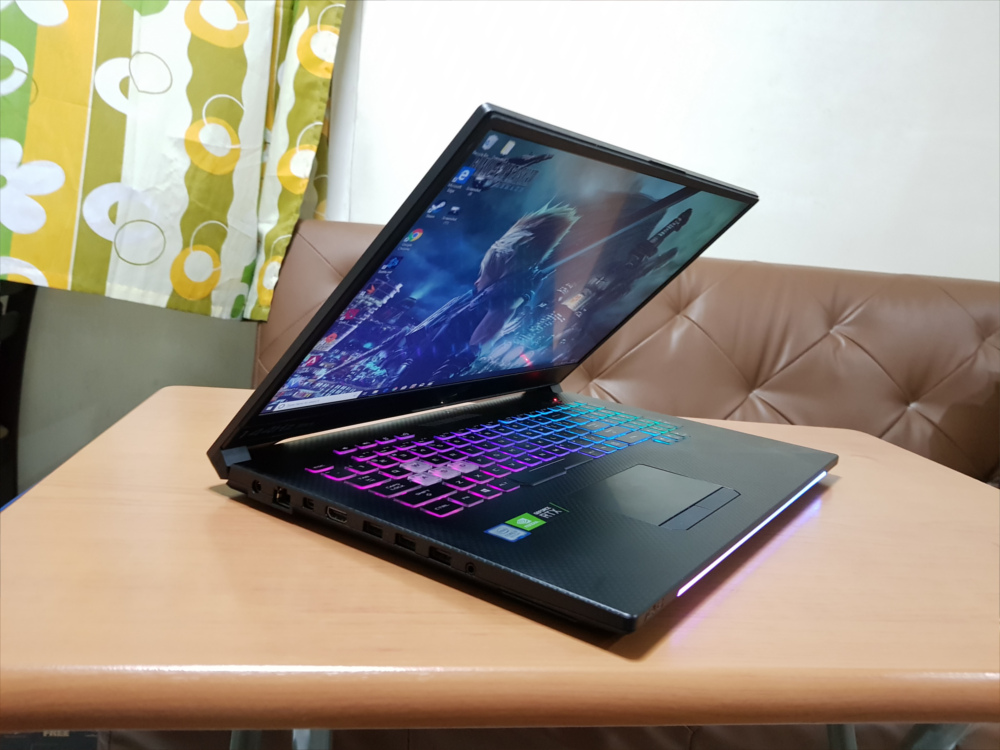 As the GL704GW has an 8th gen Intel Core i7, 16GB of RAM, and a 256 GB SSD, it performed well for day-to-day tasks. With these specs, the laptop won’t become slow anytime soon.

Another good thing about the laptop that it has a fairly good battery life. In my tests the SCAR II was able to play a 2-and-a-half-hour movie with an hour of battery life to spare. With proper battery life management, the laptop should be able to get around 4 or even 5 hours of use on a single charge.

Though some cons with the laptop is its weight. Even if it’s smaller than the usual 17.3-inch laptop (thanks to minimal bezels), it’s still a hefty beast. 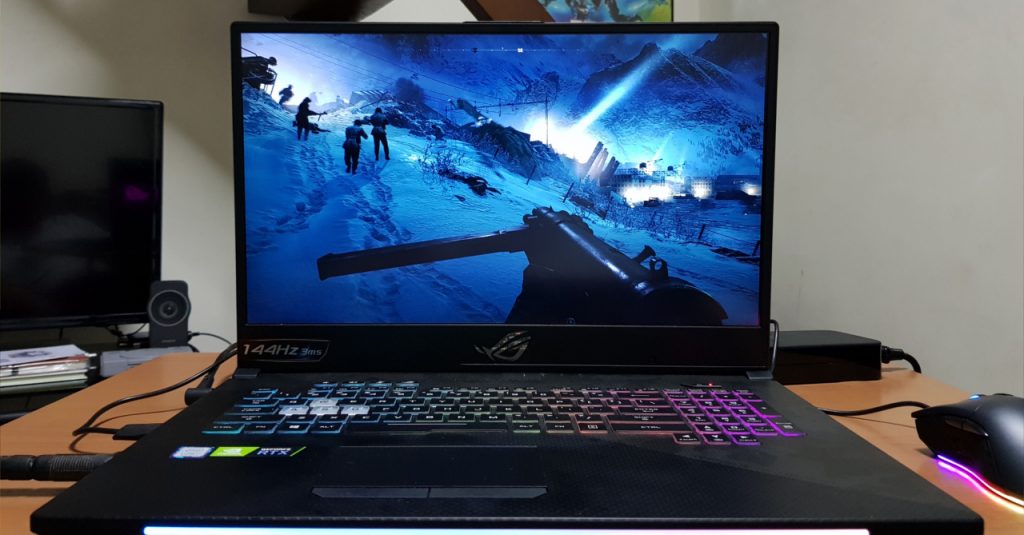 Overall, the ROG STRIX GL704GW SCAR II is a large and powerful gaming laptop that should be able to handle most games with ease. Thanks to its high-end specs, 144Hz display, and free gaming mouse, the RTX-powered SCAR II is a compelling package. Not to mention that it has a tons of I/O ports, more than your average gaming laptop.

The GL704GW is far from a perfect device though. It got slightly warm when playing, and the RTX GPU’s ray tracing tech is still at the early stages. If you’re looking to buy this because of ray tracing, I recommend waiting for the tech to be more noticeable when actually playing.

So is the RTX-powered SCAR II worth it? If you really want a gaming laptop with an RTX GPU for future games with ray tracing, then yes it’s a good option. If not, then you might be better served by the Zephyrus M, especially as they both cost the same.

Previous article
Realme is the official Epic Sponsor of the Mobile Legends Pro League Season 3
Next article
Skechers collabs with One Piece for new D’Lites 3.0 collection

ASUS' new SCAR II is a large and powerful gaming laptop which can handle games and day-to-day use with ease, plus it has more I/O options compared to other laptops. Though at its price, it's hard to recommend over something like the Zephyrus M, especially as the RTX GPU's ray tracing function isn't exactly worth it right now.Geek Lifestyle Review: ASUS ROG Strix GL704GW SCAR II (RTX 2070 version)