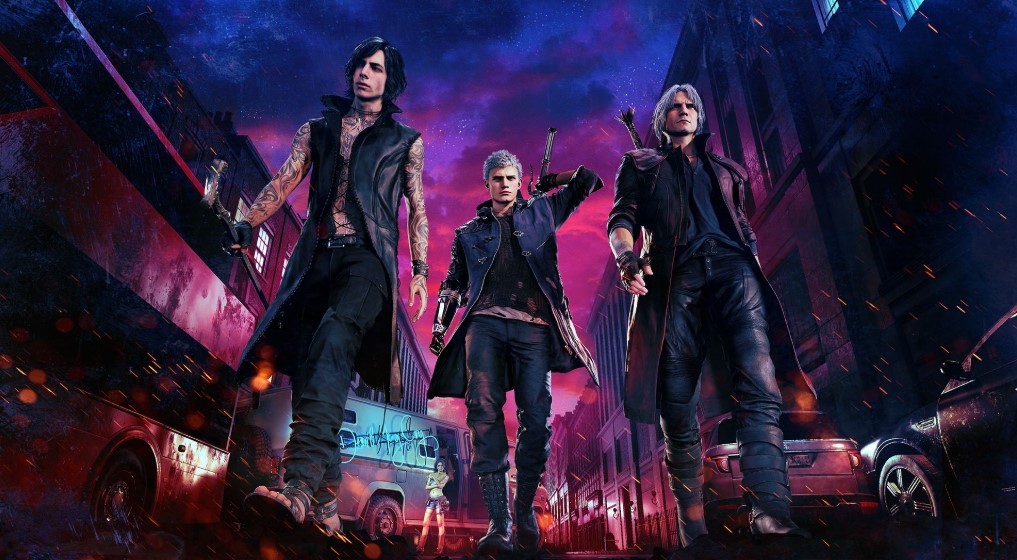 Capcom has been hitting all the right notes lately. Going back to Monster Hunter World and then to Mega Man 11 (sprinkled with all of the Legacy collections in between) and then most recently to the Resident Evil 2 remake (and the Resident Evil Switch ports), it was clear that Capcom had been giving the fans what they want and have been doing it with fan favorites and high quality outings. Devil May Cry 5 is their latest release and after 11 long years (not counting DmC from 2013, because reasons), we finally get a proper follow up to the series. Will DmC 5 keep Capcom’s streak of blockbuster hits going? Find out in our review!

As a longtime fan of the series dating back to the first game, you can only imagine how hyped I was as DmC 5 crept closer and closer. I intentionally stayed away from gameplay videos and trailers just to kind of preserve the hype I have for the game. It worked, and finally loading it onto my console was a moment of sheer joy that was followed by hours of undisturbed gameplay. It was fantastic, and it’s something I want to try to share with you through this review without spoiling anything.

For starters, the premise is very simple. DmC 5 is basically Dante, Nero and the rest of the cast trying to stop a big baddie from taking over. If you have not noticed, the past DmC games have mostly revolved around this somewhat shallow script. The story as a whole is alright, it isn’t life changing but there are twists, comedic moments and interesting interactions to keep things above water throughout the 10-15 hour campaign. I loved the fact that everybody was on board for this installment, from Lady to Trish, even adding a new companion in V (not 5, it’s literally the letter V), making the game feel extra special as you see them all together for an enjoyable, predictable, but engrossing and highly replayable experience.

You don’t need to have played the past games to enjoy DmC 5 but obviously, there are nods to events and happenings in past games that will add to the overall experience. Still, it’s not such a big deal. Long time fans can choose to refresh themselves with a “The story so far…” video from the menu similar to what Kingdom Hearts 3 has (you can view the video below). For those interested, the chronological timeline is DmC 3, 1, 4, 2, and then finally 5 (Capcom apparently clarified this and says that the order is officially 3-1-2-4-5).

I’d like to point out that as with most games, you have a choice to use either English or Japanese dubbed voices in the game. When the opportunity presents itself, I would always choose to go the Japanese voice route because you can expect the voice acting to be very well done even if you have to read through subtitles to enjoy it fully. For DmC 5, it’s interesting to note that the English voice acting for the game is actually very good, good enough for me to go through the game with the English audio setting. It’s far from cringey and to be honest, if not for Nico’s redneck-y accent, I’d go as far to say that the voice acting here is superb and on point all throughout the game. It’s a surprise, but a very welcome one at that.

Fans of the series know for a fact that DmC is not your typical hack and slash game. In fact, mashing buttons will get you close to nowhere. Style is what matters in the DmC series and dare I say that DmC 5 may have the best implementation of the system yet. With the simple core loop of missions – collect orbs – upgrade, and with close to millions of orbs needed to completely upgrade everything, you’ll need every drop you can get and this is where style comes into play. The simplest explanation I can probably think of is that if you were to kill an enemy just by pressing Triangle (default attack button) over and over, you would get a rating of D or maybe C, which amounts to a certain number of points towards the end of the level. However if you kill the enemy via a combination of your skills, the flashier the better, you’ll probably be able to bump up the rating to a B, an A, or even SSS which is the highest rating that will yield the most amount of points. Achieving this is not the easiest thing, and you’ll have to be extremely efficient with your moves if you want to be effective.

Within the first few minutes, you’ll immediately notice that combat may seem to be easy. Honestly, it is! With a single button to pull off your main attacks and other dedicated buttons for other attacks, you’ll spend majority of the game rotating between 3-4 buttons, maybe 5, which is enough to get you by BUT going back to the concept of style is where the combat system gets really complex, easy to pick up but a pain in the a** to master. In order to achieve SSS, you’ll need to be using almost your full arsenal, from gun attacks to sword attacks to devil breakers and even exceeds just to raise the bar even higher up the difficulty (also known as cramps) scale. That’s just Nero. The other playable characters in Dante and V each have their own unique playstyle (V is my personal favorite) that you’ll have to master as well which really ups relay value even more, apart from trying to achieve the highest mission rating for all the levels.

Going back to Nero for a bit, he has these detachable arm units called Devil Breakers that add a whole new layer of complexity to his repertoire. Depending on what you have equipped, you gain access to a certain attack (Gerbera will allow you to dash attack diagonally, Punchline let’s you shoot out a homing mechanical arm that you can ride like a surfboard, Overture gives you an electric punch attack, etc) and it doesn’t end there. One of the upgrades you can choose to do is to allow you to carry more ammunition and you may also “break” your equipped one at will to load the next arm. Are you seeing what I’m trying to point out? You can essentially pull of a combo, launch them into the air with Gerbera, pull off an aerial combo, break Gerbera off into Punchline, blast a homing arm at another enemy, ride the arm into another, break it off to Overture… You get the drift. Style is the essence of the game and if your hands and fingers can pull it off before you cramp up, then you’re sure to have something with enough highlights to impress your friends. Seeing all of it come together is extremely satisfying, enough for you to repeat the mission(s) just to get that elusive SSS rating.

Dante and V have unique styles of their own, with Dante being the jack of all trades kind of character. His playstyle remains largely unchanged from DmC 4 so if you’re familiar with Gunslinger, Swordmaster, Trickster, and Royal Guard, you’ll feel right at home in DmC 5. V is the newest character in the roster and I’ll have to say that while Nero has very nifty abilities, I’ve taken a liking to V due to his familiars, which does most, if not all of the fighting for him. He has Griffon (a bird), Shadow (a cat), and Nightmare (a… err, creature) and his style mostly revolves around keeping safe and creating space between V and the enemies until he can finish them off with the final hit. It’s interesting to note that while his familiars will carry the fighting load, it is V who has to land the final hit, a mechanic that again adds a new layer of complexity to the whole mix. I love how Capcom really thought things through and since this game is a showcase of flair and style more than the story, all of these small quirks during battle come together really well to bring you a game that’s instagram worthy from start to finish.

One thing that is not instagram worthy is the photo mode. It’s 2019 and most games, if not all, should actually have some sort of photo mode installed into the system on launch day. For games such as DmC 5 where you get to perform all sorts of acrobatic maneuvers resulting in a dazzling light show, photo mode is a must but certainly not in the way it was implemented in DmC 5. It’s very lackluster, there’s very little customization choices as almost all you can really do is pan the camera around – no face edits, no depth of field sliders, etc. This could be patched sometime in the future but for now, it feels like an afterthought.

As you go through the levels, there are secret missions that contain optional objectives which when completed, will provide you with much needed rewards and resources. Some can be pretty easy to do but some will definitely test your patience and skill. I like it that they are completely optional and you may choose to ignore them if you just want to breeze through the story. Also, after reaching a certain point in the game, Nico (your handy dandy assistant / artisan / mechanic) can be summoned from phonebooths scattered in the levels, allowing you to do upgrades to skills, abilities, and weapons before heading to face the boss. If you don’t need to do any upgrading, it’s still fun to call on her everytime you get the chance just to see the Van come crashing through the roof or through some wall accompanied by a hilarious cutscene.

As with most games nowadays, DmC 5 features microtransactions (gasp) BUT these are completely optional and do not lock any game related progress behind them. You are able to purchase red orbs with real money and while this will take the farming aspect out of the game, purchasing all the available abilities and skills does not guarantee success without your skill to accompany it. That said, it’s completely optional and should not be an issue, it’s there if you want to use it but after playing through the game, it really didn’t dawn on me to use them at all.

DmC 5 is the kind of game I’d wait a long time for. Ok, maybe not 11 years long, but you get the point. It’s fun, fast, and a helluva good time to play over and over again without feeling too punishing. Pulling off those wicked combos and taking your rating to SSS levels is extremely satisfying, making all that time you’ve spent practicing all worth it. I loved how the game is for everyone, from the fans to the newcomers, it hardly alienates anyone and whether you’re a button masher to a stylish combo artist, the game is good enough to pick up, play, and enjoy right away. Heck, there’s even a log in bonus everyday!

*Devil May Cry 5 was reviewed on a PS4 Pro via a review code provided by the publisher.