So what sets ‘Days Gone’ apart from other zombie games?

We recently got to try out this upcoming PS4 title, here's what we think. 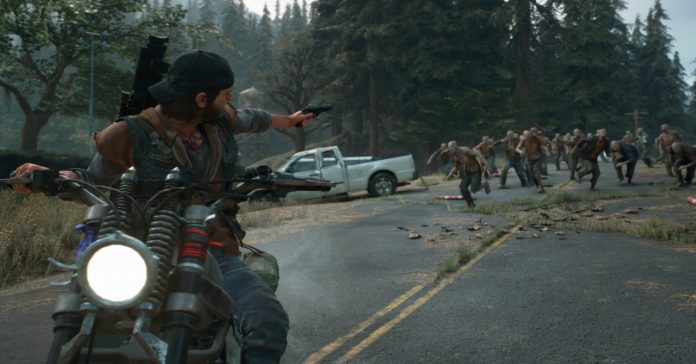 It’s fair to say that the zombie genre is far from fresh, not just because the undead are rotting heaps of flesh of course, but for the fact that there have just been a ton of zombie games released over the years. With the sheer amount of post-apocalyptic titles featuring undead enemies, I was interested to know Bend Studio’s take on the genre with Days Gone, the PS4’s next major exclusive. 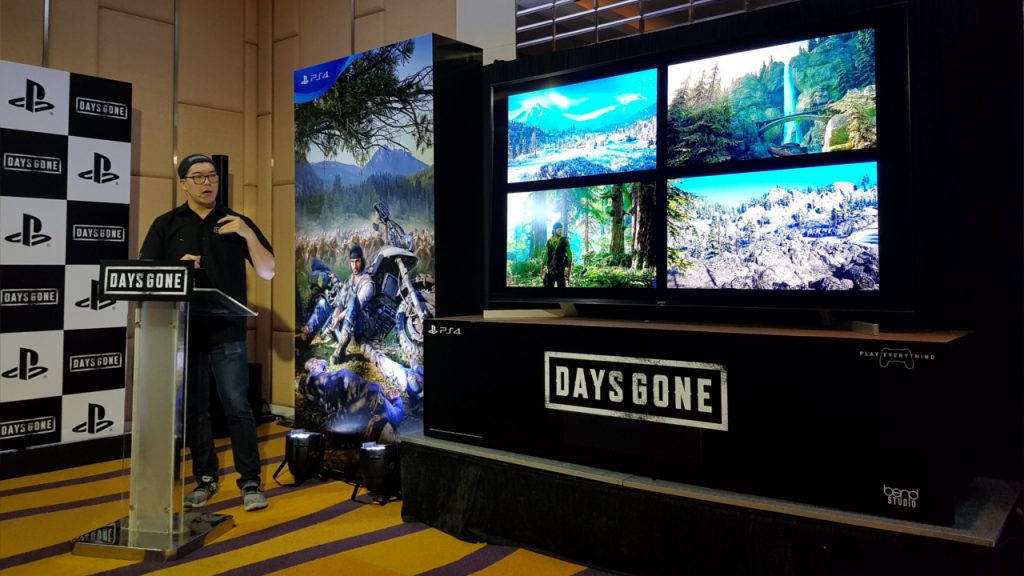 So what makes Days Gone different from other games in the genre? That was the main question on my mind when we were invited by PlayStation to the Days Gone media preview event at Bangkok last February 20. At the event, we got to try out an exclusive demo of the game, and got to ask a couple of our most burning questions to Bend Studio Community Manager, David Lee. 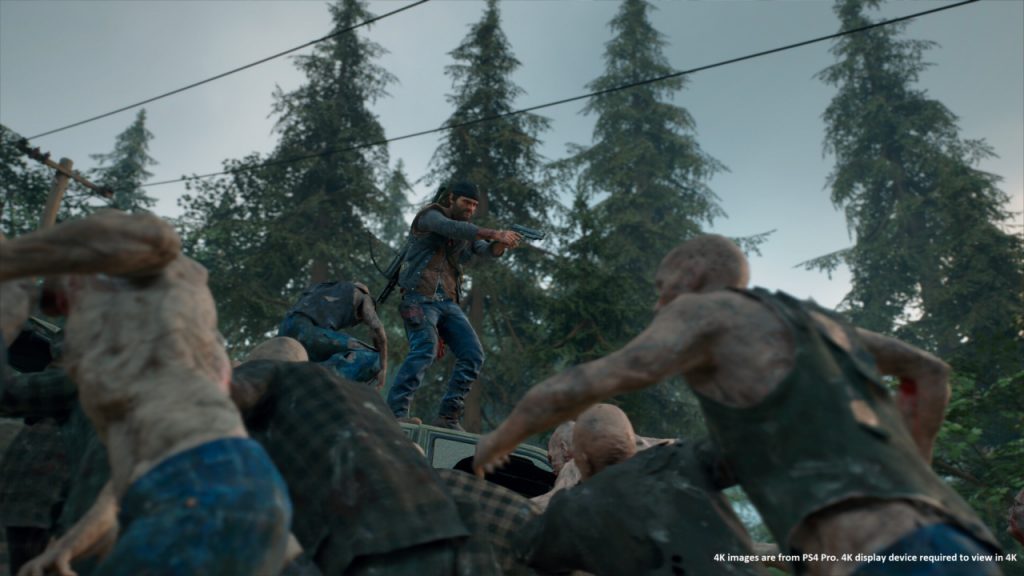 During the quick Q&A session and our subsequent demo of the game, we found out that one way Bend Studio tweaked the standard zombie formula is that Days Gone’s ‘freakers’ are not undead. The freakers in the game are alive and they need to eat and drink, not to mention that they follow a certain routine and their behaviors are affected by the weather. There’s also the fact that there are animal freakers as well, adding an extra layer of challenge when traversing the game’s open-world. Take it from my experience, facing off against a large, infected black bear is not easy. 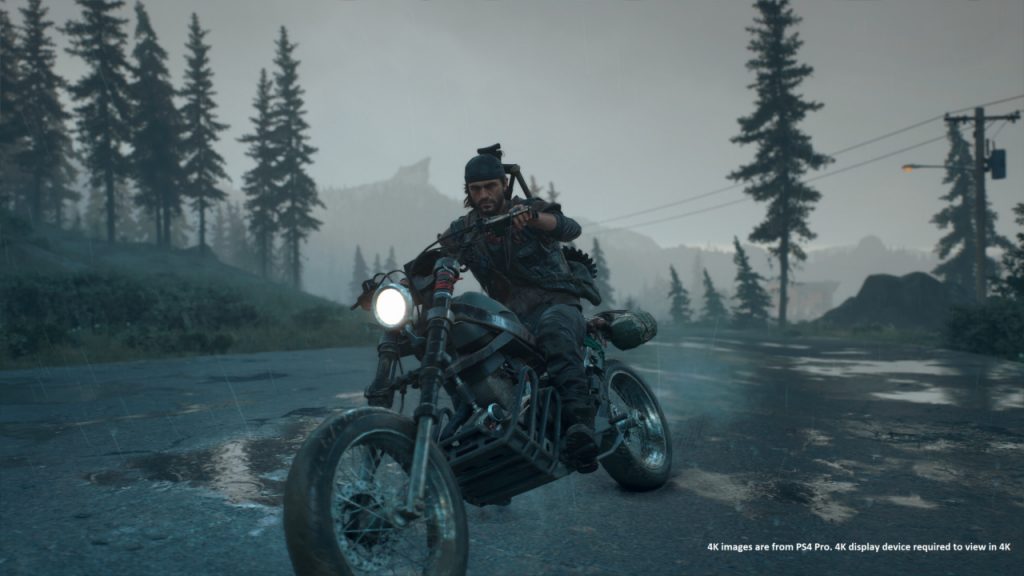 To make traveling through the game’s world (a post-apocalyptic Pacific Northwest) more manageable, players are given a Drifter Bike which serves as the main mode of transport in Days Gone; after all, players do take on the role of biker gang member/bounty hunter, Deacon St. John. The game stresses the importance of the bike as without it, not only will players be unable to fast-travel, it will also make outrunning freakers much more difficult. Good thing the motorcycle can be upgraded as players progress; on the flip-side, the bike needs to be refueled regularly by scavenging for fuel throughout the open-world. 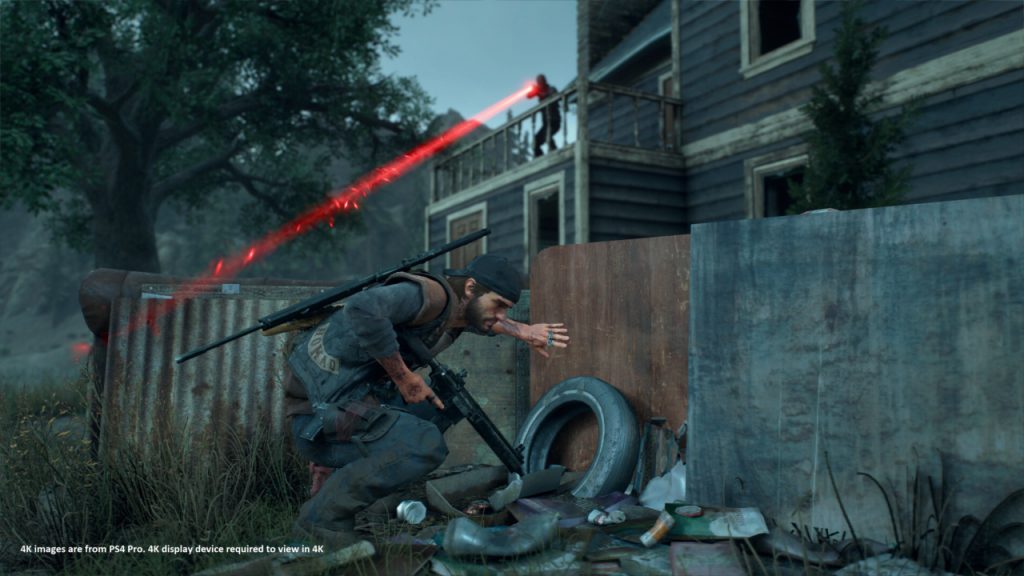 While the motorcycle mechanics are fairly unique, Days Gone’s gameplay doesn’t exactly bring anything new. Moment-to-moment combat is reminiscent of The Last of Us, PlayStation’s other zombie-survival exclusive. Much like the aforementioned title, Days Gone’s combat requires players to use is a mix of melee action and third-person gunplay, complete with crafting of medkits, bombs, and other equipment. Stealth is also a major component in the game, as going in guns blazing against groups of freakers is often a death wish. 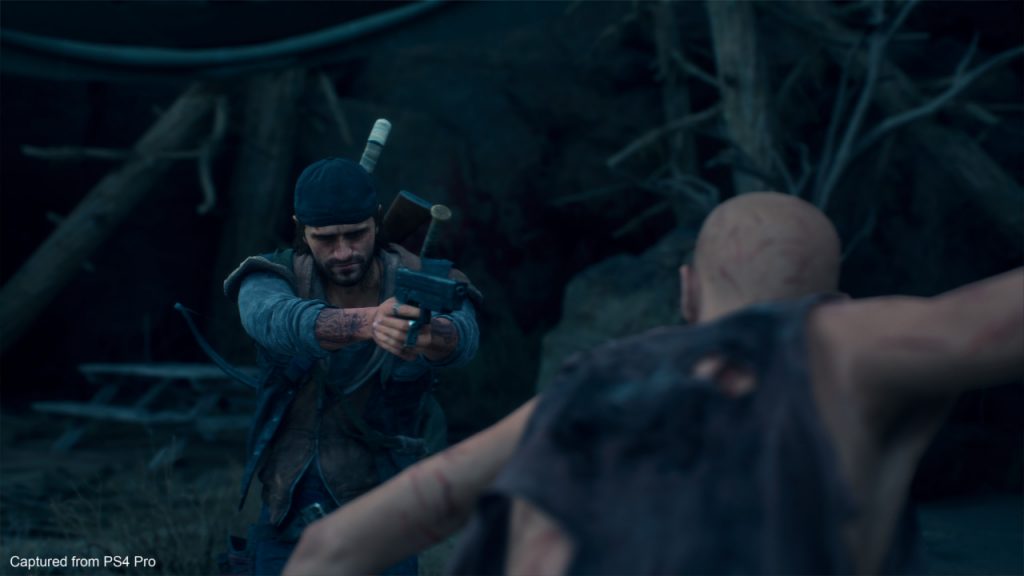 TLoU comparisons don’t stop there though, as there are also different kinds of freakers to fight (much like the multiple kinds of ‘infected’). Standard freakers are called Swarmers, and are usually minor threats except in large groups. There are also Newts, infected adolescents who are opportunists, only attacking when Deacon has low health. The highlight of Days Gone’s freakers though are Hordes, a massive group of freakers numbering in the hundreds who act like a single large unit. Aside from these freakers, Deacon will also face off against human enemies; humans may not be as menacing as freakers, but they are often just as dangerous.

Now as for progression, the game seems to borrow from other games, one of which is Horizon Zero Dawn. Days Gone’s progression system is fairly similar to Horizon as players earn perk points which can be used for skills which fall into either survival, melee, or ranged combat brackets. One of Days Gone’s skills in particular — Focus, works basically the same as Horizon’s Concentration skill which slows down time to make lining up a shot easier. 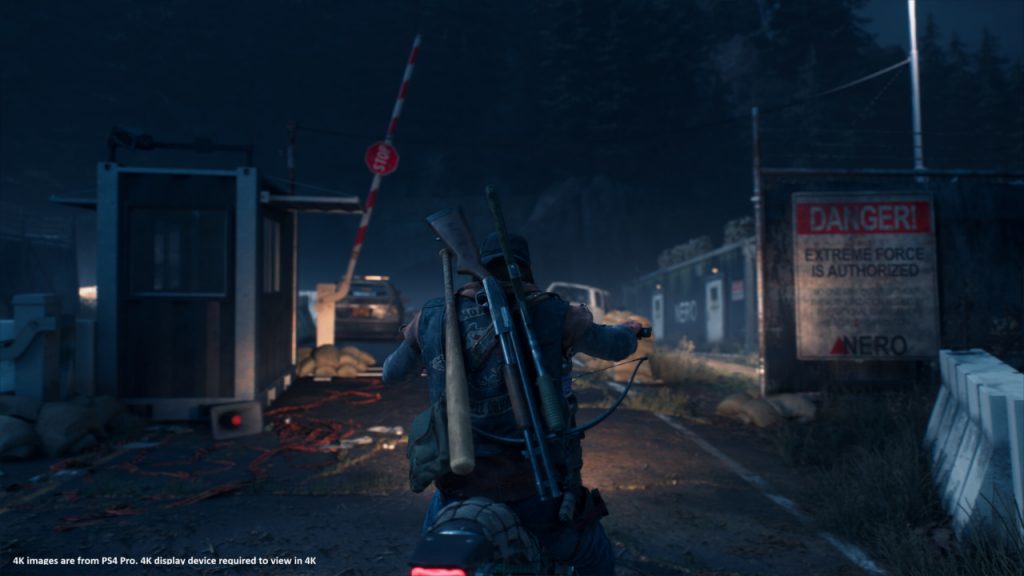 It’s fair to say then that Days Gone’s gameplay (from what I’ve played at least) is kinda like ‘TLoU-meets-Horizon.’ While the game’s combat didn’t excite me as much as the Drifter Bike did, I am looking forward to the game’s story; even if I only got to experience a fraction of it.

In promoting the game, Bend Studio hyped up the game’s story, with David telling us to “expect a tear-jerker“. While I inquired further about what to expect story-wise, he was tight-lipped and didn’t give away much. I’m willing to believe his promise of a good story though, as I was impressed by how the story unfolded in the opening moments. Without getting too much into spoiler territory, the game will seem to revolve not only around Deacon St. John’s survival, but also on how he moves past the death of his wife Sarah, who died prior to the events of Days Gone. 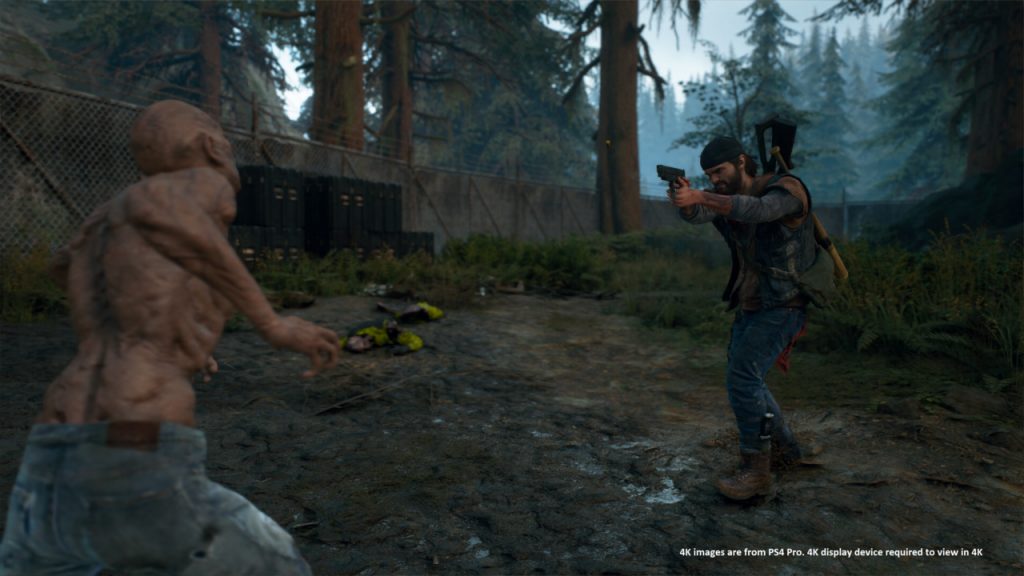 The story may have piqued my interest, and I may have found the gameplay to be good (if a bit expected), my playthrough of Days Gone wasn’t perfect. I experienced a couple of bugs during my time with the game, not game-breaking mind you, but some of them did get annoying. One such bug was when I kept on hearing freaker noises even though I was able to kill all the freakers during one particular mission. Another thing that bugged me was the loading time in the transitions from gameplay to cutscenes. While I didn’t expect God of War-level seamlessness, the transitions weren’t instant, which can break immersion slightly, especially when compared to the instant transitions of the likes of Horizon and Spider-Man

To be fair, the demo we got to play was far from the final build. There should be plenty of time to fix these issues. Plus, the last point in the transitions are just nitpicks really, it’s probably just that I’ve been spoiled by the sheer quality of recent PS4 exclusives. 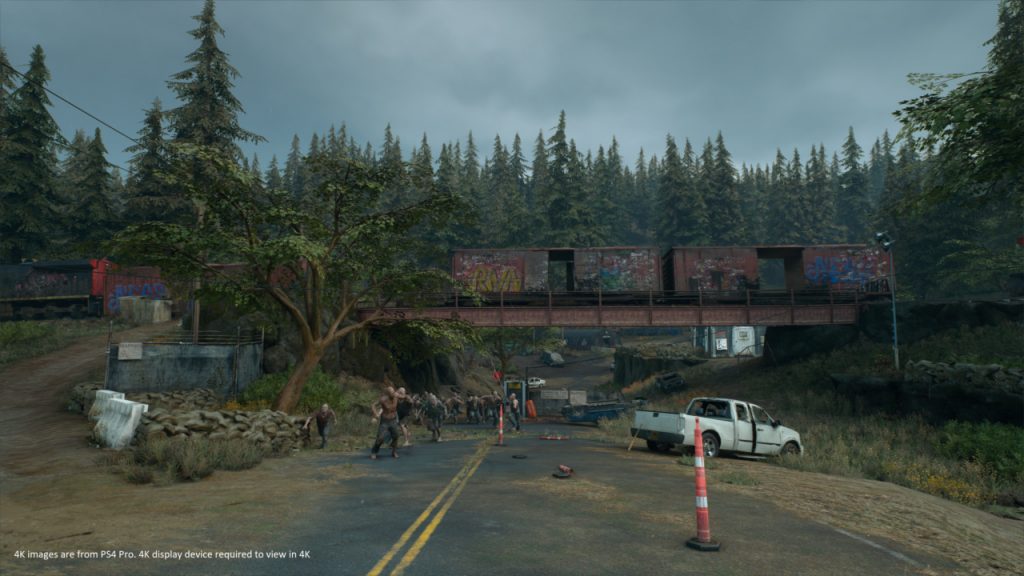 Overall though, the biggest issue with Days Gone isn’t the bugs, it’s the fact that there’s nothing truly new in the game, at least from what I’ve experienced. The gameplay is solid sure, but there aren’t many features that I haven’t played before. And while the story seems to be good, it’s not like we haven’t had post-apocalyptic zombie games with memorable, tear-jerking tales (think Telltale’s Walking Dead and The Last of Us). 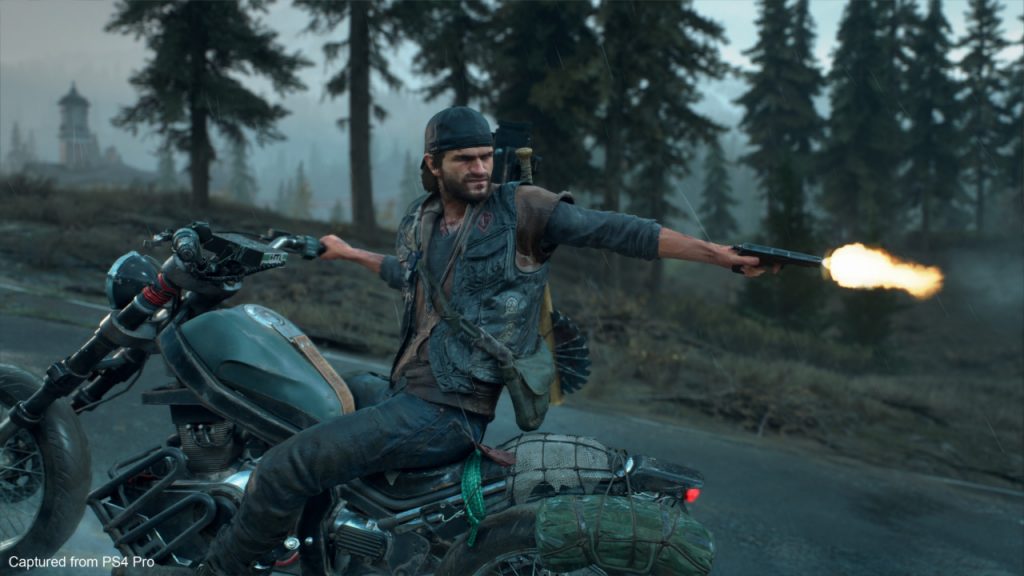 That’s not to say Days Gone is shaping up to be a bad game, in fact the opposite is true. Days Gone is still the type of game that Sony excels at — it’s a story-driven singleplayer game after all. It’s just that Sony has released some amazing exclusives in the recent years. If the game delivers an excellent story and a polished (bug-free) experience, Sony and Bend Studio has a good PS4 exclusive that’s worth playing on their hands. It’s just that I’m not expecting a groundbreaking, GOTY-level title; unless Days Gone pulls a trick up its sleeve.

Days Gone is set to release exclusively on the PS4 on April 26, 2019. Watch out here at UnGeek for our full review of the game soon.