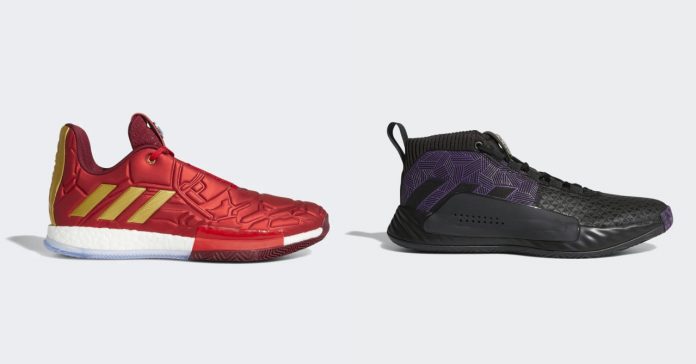 Adidas is at it again with positively-geeky sneakers! Following the impressive Dragon Ball and Game of Thrones collections, Adidas has collaborated with Marvel for a line of Avengers-inspired sneakers, just in time for the release of Avengers: Endgame in theaters.

Up first is the ‘Iron Man’ Harden Vol. 3. This sneaker comes in a red and gold colorway, and is complete with Iron Man-inspired design, including a Stark Industries logo at the back and the Iron Man helmet on the tongue.

Next we have the ‘Captain America’ N3XT L3V3L sneakers. This pair has a red-white-and-blue colorway with Captain America’s shield on the tongue and on the outsole.

The third sneaker in the collection is the ‘Thor’ Marquee Boost. The sneakers come in a silver, gray, and red colorway, with the a chainmail-inspired finish, emulating the God of Thunder’s armor.

The newest hero in the MCU is also getting some love with the ‘Captain Marvel’ Pro Vision shoes. The pair has a blue, red, and yellow colorway complete with the words ‘ACE’ on the tongue, a reference to Carol Danvers ‘ace-pilot’ past.

The fifth sneaker in the collab is the ‘Black Panther’ Dame 5. The sneaker has a primarily black color with a tribal pattern and purple accents — a reference to the “Heart-Shaped Herb” that gives T’Challa his superhuman powers.

Finally, we have the ‘Nick Fury’ T-Mac 1. The shoes come in a black colorway with white accents, and features the SHIELD logo at the bottom along with camo patter on the outsole.

The Adidas x Marvel sneakers are available now in the US with prices ranging from USD 110-180. As for the Philippines, the Captain America N3XT L3V3L is available now at the Adidas PH site for PHP 9,000. The Black Panther Dame 5 was also made available at Titan for PHP 6,500, but is currently sold out.