It was an all-Indonesian Finals in Manila last Sunday! 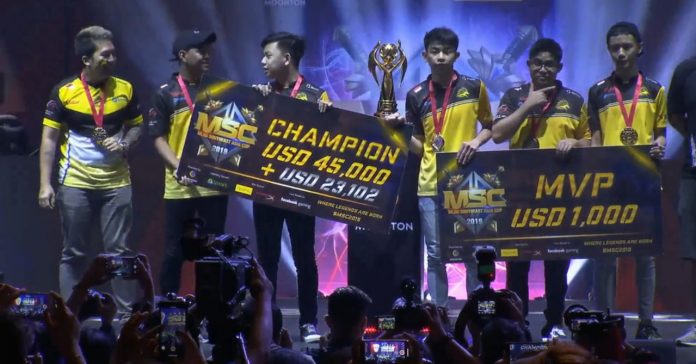 After a weekend filled with exciting ML action, the Mobile Legends Southeast Asia Cup 2019 (MSC 2019) at the Araneta Coliseum has come to a close. At the end of the tourney last June 23, Indonesian team Onic Esports was crowned the champions after defeating fellow Indonesian team Louvre Esports 3-0.

The Finals was actually Onic and Louvre’s second series against each other; both teams first met in the upper bracket finals after defeating IDNS and ArkAngel respectively. Their first series ended in a 2-1 victory in favor of Onic, which dropped Louvre to the lower bracket finals.

At the lower bracket finals, Louvre Esports faced off against ArkAngel, by then the last Pinoy team standing. ArkAngel’s efforts were not enough though as the team was defeated by Louvre 2-1.

Onic and Louvre’s rematch at the Grand Finals proved to be a more one-sided affair compared to their previous series. Onic Esports made quick work of their fellow Indonesian team, sweeping the series to claim the MSC 2019 crown. With their win, Onic Esports took home USD $68,102 (almost PHP 3.5 million).

ArkAngel may not have made the finals, but the team still had a great showing overall, taking home third place along with USD 15,133 (around PHP 776,000) in prizes.