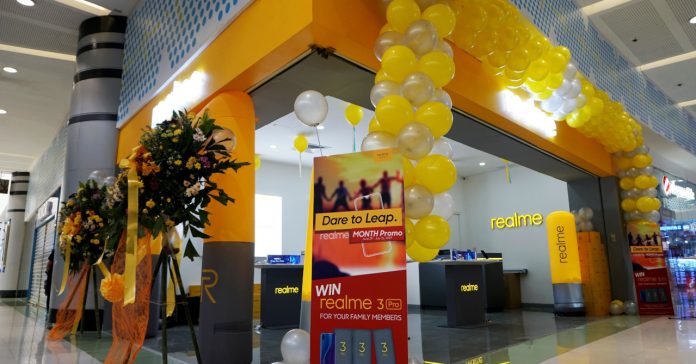 Last weekend, realme opened its first-ever concept store in the Philippines at SM City Fairview. The new concept store is realme’s biggest retail outlet to date, and to celebrate, the first 30 buyers at the store received a realme gift pack worth PHP 1299.

During the store’s opening, realme also launched its new brand campaign entitled “Dare to Leap.” The campaign was started to celebrate the brand’s successful first 8 months in the Philippines, and it aims to further connect realme with its target demographic — the young trailblazers.

As part of the campaign, realme is offering various promos, including a rainy day promotion that gives buyers a chance to win up to 10 brand-new realme 3 Pro units with the purchase of any realme smartphone from June 29 to July 31. Realme will also take part in the upcoming Shopee 7.7 Sale, as well as the Lazada Mid-Year 7.12 Sale.

Aside from awesome deals, realme also plans to be more involved in the PH gaming scene. The brand will kick-off Season 2 of its inter-community Mobile Legends tournament this August, as well as the “Stream-for-a-Cause” charity game stream which will feature famous Pinoy streamers.

“We are ecstatic to share all of the surprises we’ve been working on for our fans this coming brand month. We hope not only to expand our touch points but also, and more importantly, to engage and grow our community members through different activities. This July, we will further dare to leap to further heights to provide real value to each and every Filipino smartphone user,” shares realme Philippines Marketing Lead, Eason de Guzman.