MSI unveils the Alpha 15, a Ryzen and Radeon-powered gaming laptop 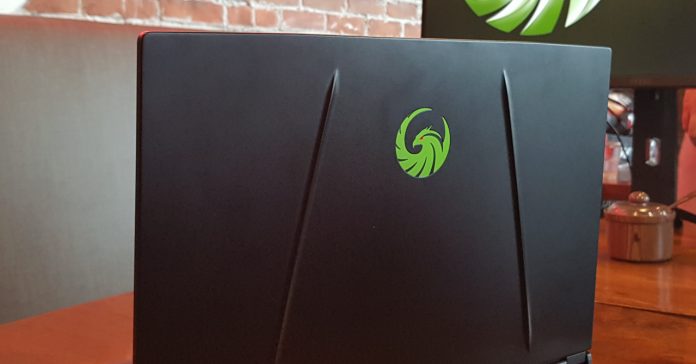 Aside from lots of games and esports tourneys, ESGS 2019 is also featuring lots of tech from renowned PC manufacturers. One of the featured tech brands at ESGS is MSI which just unveiled an exciting new gaming laptop — the Alpha 15. 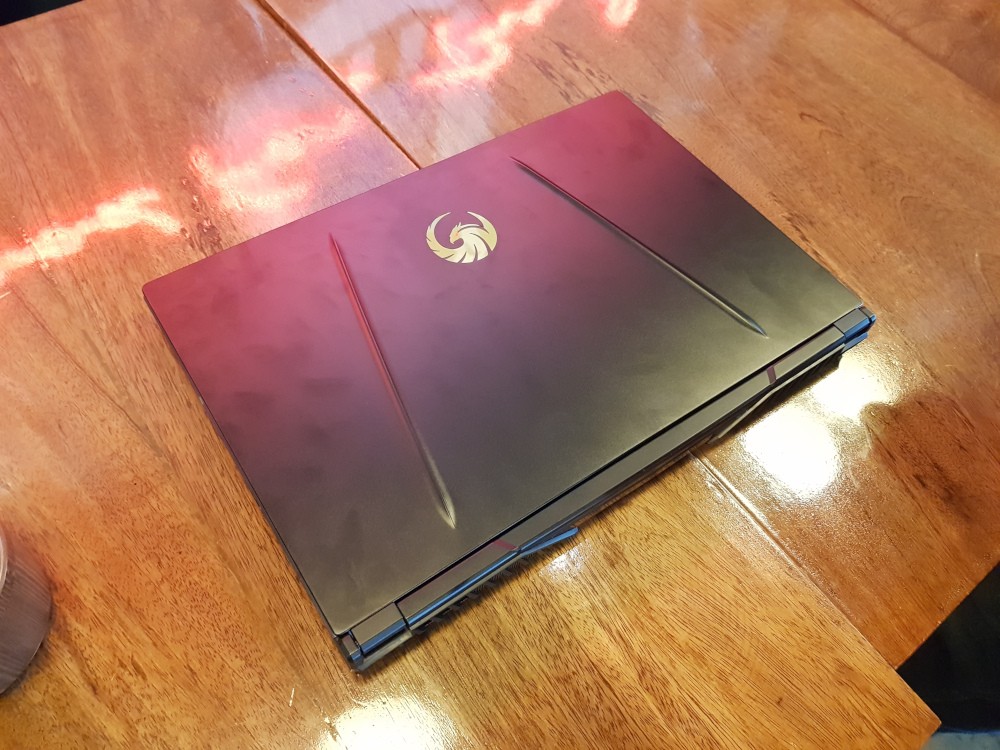 The Alpha 15 is a new laptop in MSI’s new Alpha line, complete a new logo, a Thunderbird instead of the usual MSI Dragon insignia. With the Alpha 15, MSI is making premium on-the-go gaming available for entry-level users given that it packs a feature set and is made with materials that’s usually found in higher-end gaming machines. 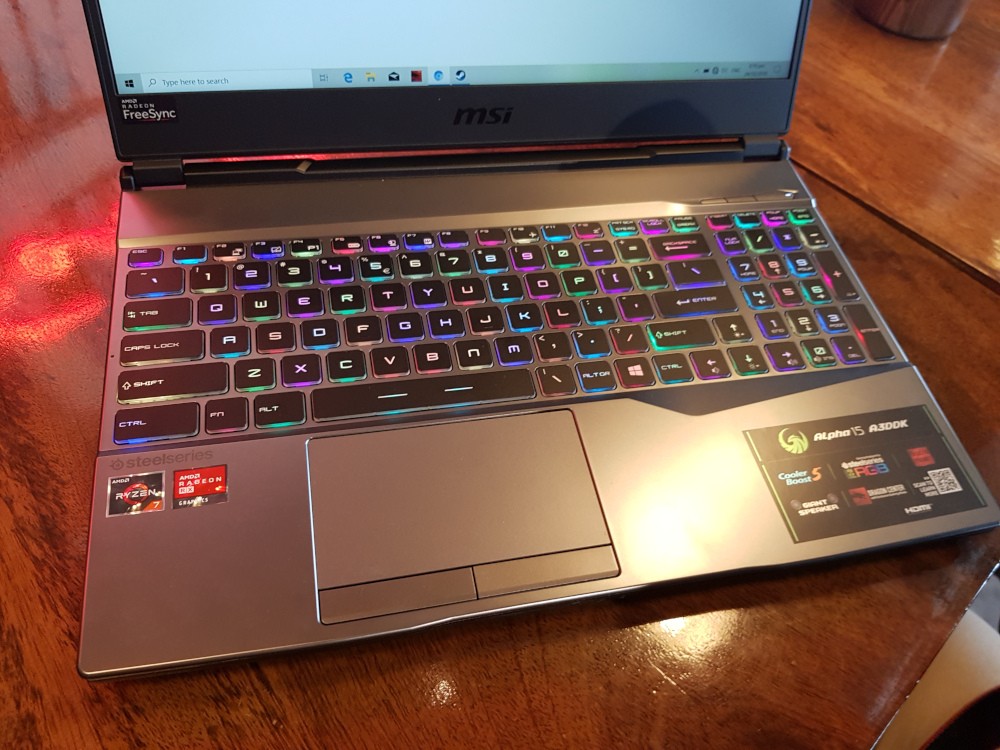 Powering the MSI Alpha 15 is an AMD Ryzen 7-3750H CPU paired with an AMD Radeon RX550M, making it MSI’s first all-AMD gaming laptop. Personally, I’m quite interested in testing out this laptop’s gaming capabilities, as most of the other laptops I’ve tested had Intel+NVIDIA or AMD+NVIDIA hardware. To give you an idea of its gaming performance though, MSI said that the RX550M should perform in between the GTX 1650 and GTX 1660.

What’s a bit concerning at first is that the laptop only comes with 4GB of RAM. In our experience, 4GB is not enough for most games today. Thankfully though, MSI does offer a RAM upgrade service (free for users who pre-order). To make up for the lack of RAM, the Alpha 15 does have a 512GB SSD by default.

As for its display, the Alpha 15 packs a 120Hz 15.6-inch FHD IPS level screen, a per-key RGB backlit keyboard, and an interesting bottom panel design with lots of vents for cooling. For I/O, the Alpha 15 has a lot of ports such as an HDMI, DisplayPort, Type-C, SD card reader, and even three Type-A ports that light up. 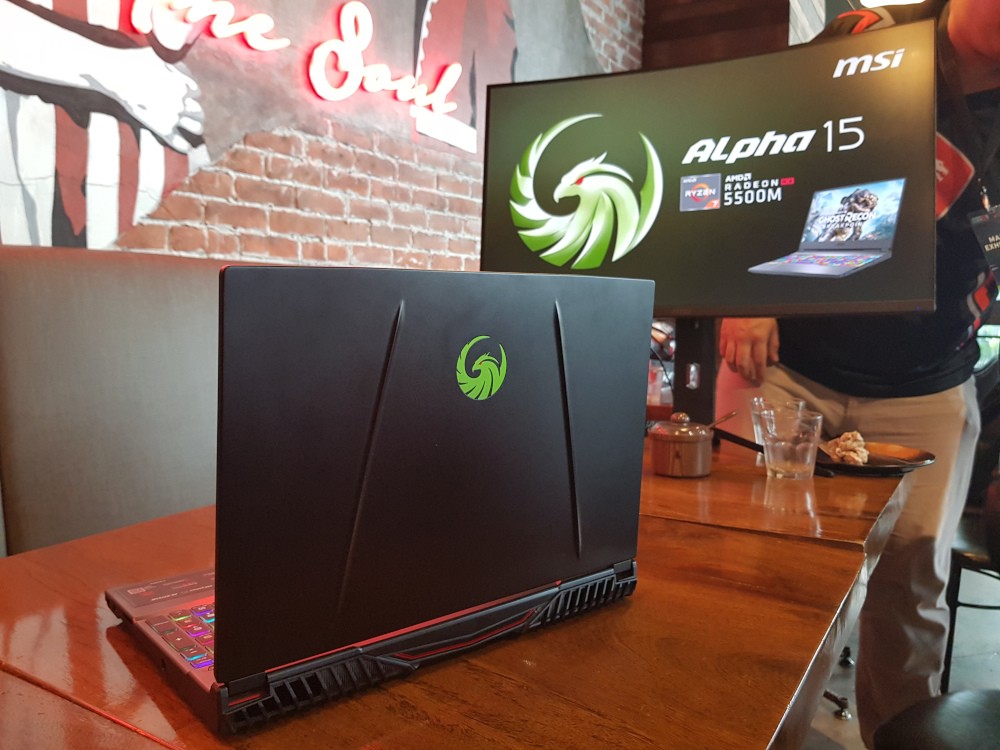 Now for its price. The MSI Alpha 15 is priced at PHP 62,995; not bad at all considering the premium features you get. While the lack of RAM might be an issue, an extra 4GB should do the trick. 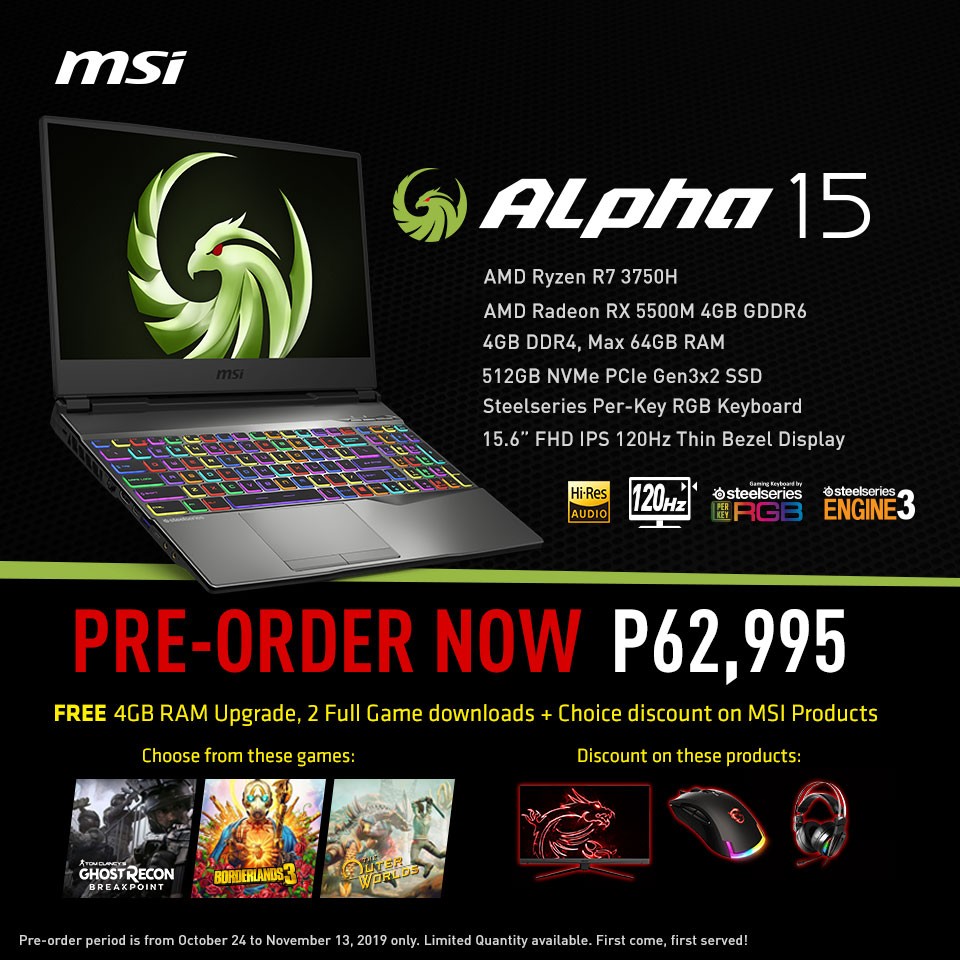 The Alpha 15 is available for pre-order now until November 13, 2019. Each pre-order comes with a free 4GB RAM update, two free games, and discounts on select MSI products.

Aside from unveiling the Alpha 15, MSI has even more in store for ESGS attendees. MSI has a special promo for its F63 9SC-688PH laptop at ESGS 2019, with the said notebook’s price dropping to only PHP47,995; a good deal considering the laptop packs a Core i5 9300H CPU,  aGeForce GTX 1650 GPU, 8GB of RAM, and a 512GB SSD. Better hurry though, the deal is only availabel at ESGS until the 27th.

Booth visitors will also have a chance to win goodies such as gaming bags, a Steelseries 9H gaming headset, and an MSI Optix G24C  24” Gaming monitor through the MSI Bingo game.

- Advertisement -
Previous articleYes, Conan O’Brien is in Death Stranding!
Next articleFinal Fantasy VII Remake now up for pre-order in the Philippines