Conan plays "The Wandering MC" in the game! 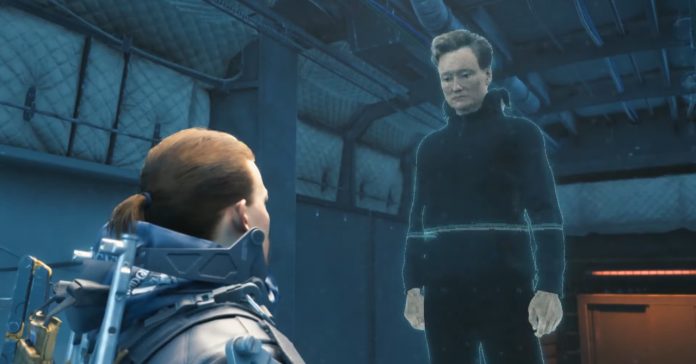 Last year, Conan O’Brien visited the Kojima Productions office and shot something “super-secret.” Now, we finally know what exactly went on during Conan’s visit to KojiPro, and what happened was hilarious!

Check out the video of Conan’s visit here:

So yeah, Conan is officially in Death Stranding! After meeting game director Hideo Kojima and watching the game’s trailer, Conan was invited to be part of the game. Conan’s face was scanned, and voila, he is an actual character in Death Stranding. And yes, Conan even recorded voice lines for the game.

In the game, Conan plays “The Wandering MC,” a character that gives the player a “Sea Otter Suit” (probably as a reward for finishing a quest). According to Kojima, the item will let players swim easily and not get swept away in rivers. And apparently, it’ll also make BB happy too!

Conan O'Brien appears as a prepper “The Wondering MC” in DS. You get “Sea Otter Suit” when you get connected with him. With this suit, you’ll be able to swim easily in the river, you won’t be drifted away! BB would be happy as well. 👍🌈🦀☔️🐟🐋🐬💀👶✋🤩😍 pic.twitter.com/nIsw5JS5t0

Conan being in Death Stranding is a fun cameo, after all, Conan does do gaming content in his hilarious Clueless Gamer series. Plus, the Sea Otter Suit (or hood at least) is just way too funny, and continues the tradition of funny headwear in Kojima games such as the MGSV Chicken Hat and the MGS3 Crocodile Cap.

Death Stranding releases on November 8 for the PS4. In case you aren’t convinced with the game yet, watch out for our review which comes on on November 1!