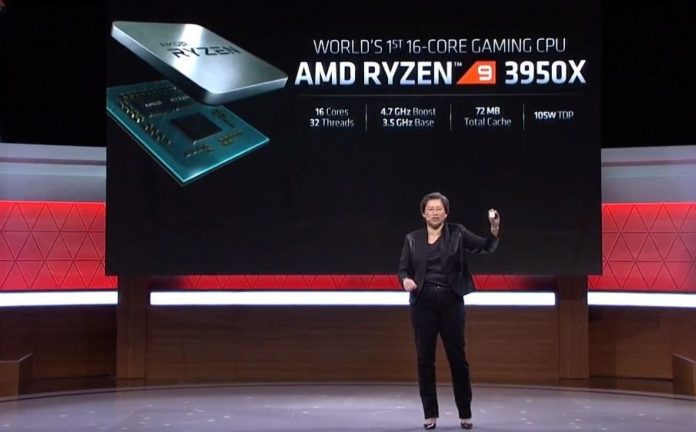 “We are excited to bring the AMD Ryzen™ 9 3950X to market later this month, offering enthusiasts the most powerful 16-core desktop processor ever,” said Chris Kilburn, corporate vice president and general manager, client channel, AMD. “We are focused on offering the best solutions at every level of the market, including the AMD Athlon 3000G for everyday PC users that delivers great performance at an incredible price point.”

As the fastest 16-core consumer desktop processor available, AMD Ryzen 9 3950X processor offers incredible performance best experienced with a liquid cooling solution. AMD is recommending the use of an AIO solution with a minimum 280mm radiator. A list of AMD recommended coolers can be found on AMD.com to ensure enthusiasts can maximize the potential of the Ryzen 9 3950X processor.

AMD also announced a significant upgrade coming for mainstream desktop users with the new AMD Athlon 3000G processor, arriving November 19, 2019. The new AMD Athlon 3000G with Radeon™ Graphics brings reliable computing experiences to a wide range of users, from day-to-day needs to high-definition PC gaming, offering faster framerates when gaming and enhanced productivity performance over competition at an incredible price point. The Athlon 3000G is the first “Zen”-based Athlon processor that is unlocked for overclocking potential, delivering the only unlocked processor in its segment.

To ensure the best experiences for all users, this month, AMD released AGESA version 1004 to its motherboard ecosystem. Containing more than 150 updates, AGESA 1004 offers significant improvements for the AM4 platform focused primarily on stability. Key improvements include AMD X570 stability and compatibility with add-in devices, PCIe® device support and stability, and interoperability of PCIe®, USB, SATA, and device reset capabilities, alongside performance enhancements with fastest core utilization and further boost frequency optimizations for the AMD Ryzen™ 9 3900X. More information on the specific updates AGESA 1004 can be found here.