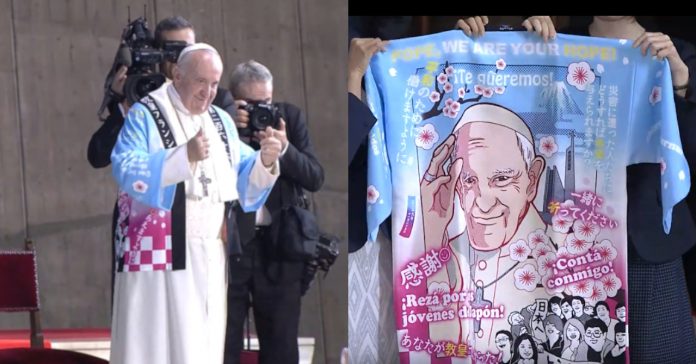 Pope Francis is currently in Japan for a four-day Papal visit to spread an anti-nuclear weapons message, meet with the victims of the 2011 Fukushima nuclear disaster, among many other engagements.

The Pope’s visit is definitely an inspiring one not only for the Japanese, but for everyone in the world, whatever his/her religion might be as his message of peace is one that all the of us can appreciate. Aside from being inspired by his message, we couldn’t help but find one part of his visit incredibly kawaii!

At one point during his Japan visit, Pope Francis was given a “happi,” a Japanese-style coat. Though instead of having a traditional design, this happi featured an anime/manga-inspired illustration of the Pope, as well as other design elements emblematic of Japan such as cherry blossoms. The best part about it is that Pope Francis actually wore it!