Who can say no to more Dragon Ball?

When you think of Dragon Ball Z games, the first thing that most of you will think of is probably either the old Budokai games or the well-received Dragon Ball FighterZ — all of  which are fighting games that fit the franchise well. But when I heard that the latest addition to this series of games was announced as an “open world RPG”, I just couldn’t help but be skeptical. Since my last experience of an open world game based from another beloved franchise was rather underwhelming (cough..cough.. one piece), my expectations are low for any new open-world anime games. After experiencing Dragon Ball Z: Kakarot though, I was pleasantly surprised that, while not perfect, is a rather good open world DBZ experience. 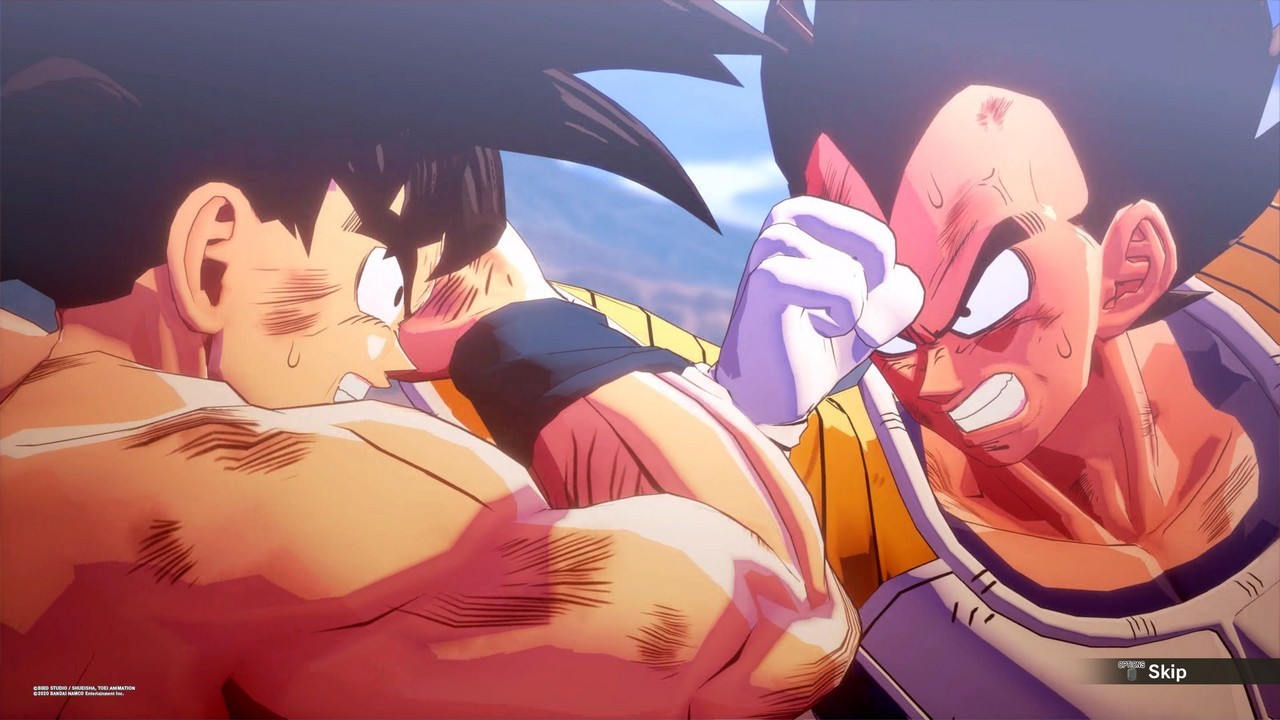 DBZ: Kakarot retells the storyline of the DBZ series, starting from the Saiyan Saga to the Buu saga (which was retconned to fit better into the game). The whole game is a real nostalgia overload, especially when you start up the game as it revs up the good ol’ Cha-La Head-Cha-La theme song, a song that always makes me excited. The only downside though is that is some of the classic scenes are gone like the iconic Power Level moment. In spite of the omission of some scenes, I still found the presentation to be pretty good, this is helped by the fact that the ending of each arc is narrated the same style like the anime. 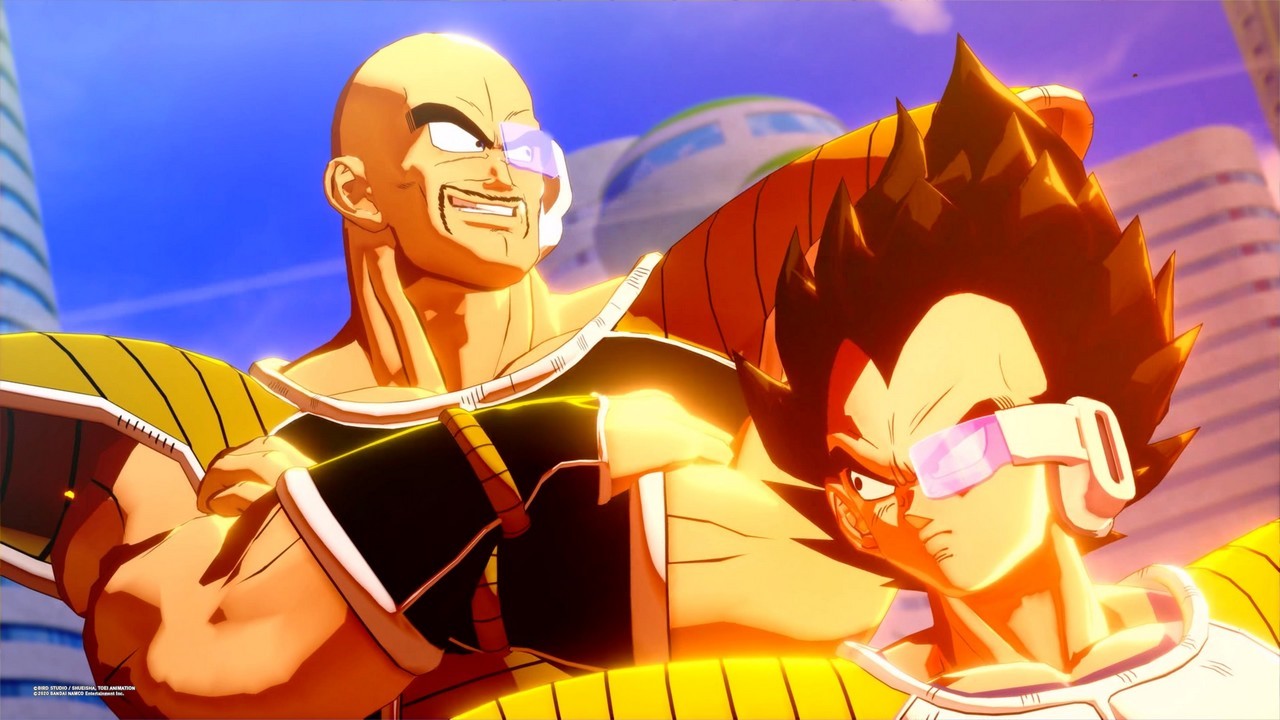 In the past, the game’s developers promised the game will tie-up lots of loose ends from the series via the completion of side-quests. But honestly, I found that these side quests were more of a bother rather than satisfying tie-ups to various loose ends. They do serve as a good refresher to the original Dragon Ball series that came before Dragon Ball Z though. Despite this, I found that most of the new inclusions in DBZ: Kakarot weren’t that engaging. In fact, I found myself heading out towards the next fight to progress the main storyline instead of going through side quests like what I usually do in other open-world games.

Aside from side quests though, players are able to explore the open-world through the game’s intermission segments before the next major arc. These segments are a great time to collect some Z balls/orbs (Ki balls/orbs? whatever they are called), materials and side quest.

My power level can go beyond PLUSSS ULT***.. 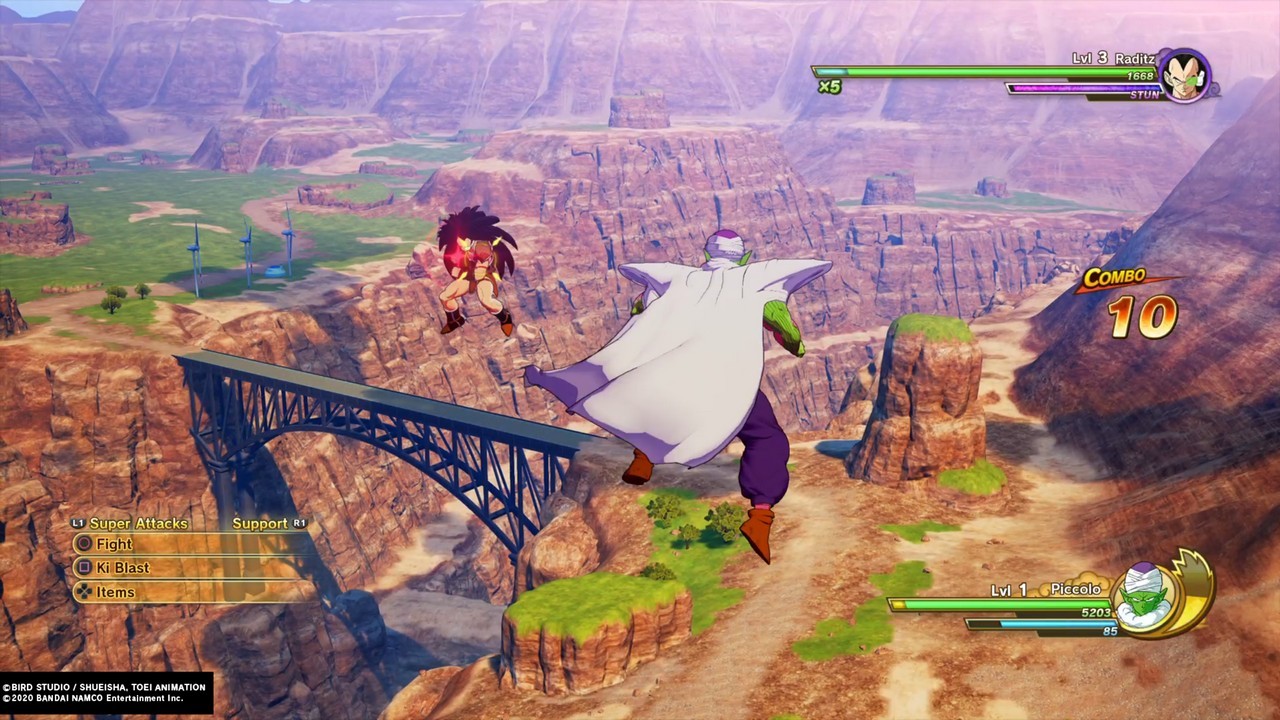 DBZ: Kakarot is sold as a open-world RPG that lets you interact with the world. But exploration is pretty limited to your current story progress, making some areas inaccessible. Although the vast open area provides tons of space for exploration, and the scattered Ki balls around the area encourages the player to explore (as these balls are essential for character growth progression), I found that open-world exploration is very much optional. Sure, side quests and mini-games might be fun for some, but the main quest itself already gives out lots of experience points, meaning you shouldn’t be under-powered even if you don’t explore the world all that much.

Be aware though as enemies are scattered around the area, and you might attract the attention of way more powerful ones that might result to your defeat. But don’t be afraid as there are tons of ways to improve each characters. One is by eating meals and training; cooking and eating meals can help you boost your stats while training can net you tons of experience points. Though perhaps the best way to gain even more bonuses is by building communities via the community system where each characters can link up and unlock tons of bonuses based on the combination that they trigger. Plus, each communities have their own perks, so you should choose which community to join based on your preference.

As for battles, they’re quite fun. When a battle breaks out, your character won’t be teleported to a new location, instead you battle your foes seamlessly from the open-world. Each character wields signature moves like Piccolo’s (Makakazam.. Makan. dang it) Special Beam canon and Krillin’s Destructo Disc. But as you progress more in the story, you can unlock even more special moves and  transformations making progression in the game even more rewarding. Your buddies can also help you during the fight through support moves that you can command.

What makes these battles incredibly satisfying though isn’t just the combat, it’s also in their presentation. While not exactly difficult to execute (for the most part), actions in combat just look amazing, even more so during boss battles. During boss fights, there’s a cool cinematic mode that makes me feel like I’m playing an episode of DBZ!

Some enemies have special moves that tend to wobble the camera; this makes some fights a bit hard to see. Still, this doesn’t happen often enough to be a major nuisance, so overall I’m still very much satisfied with the game’s fun battle system.

Memories can only get you that far 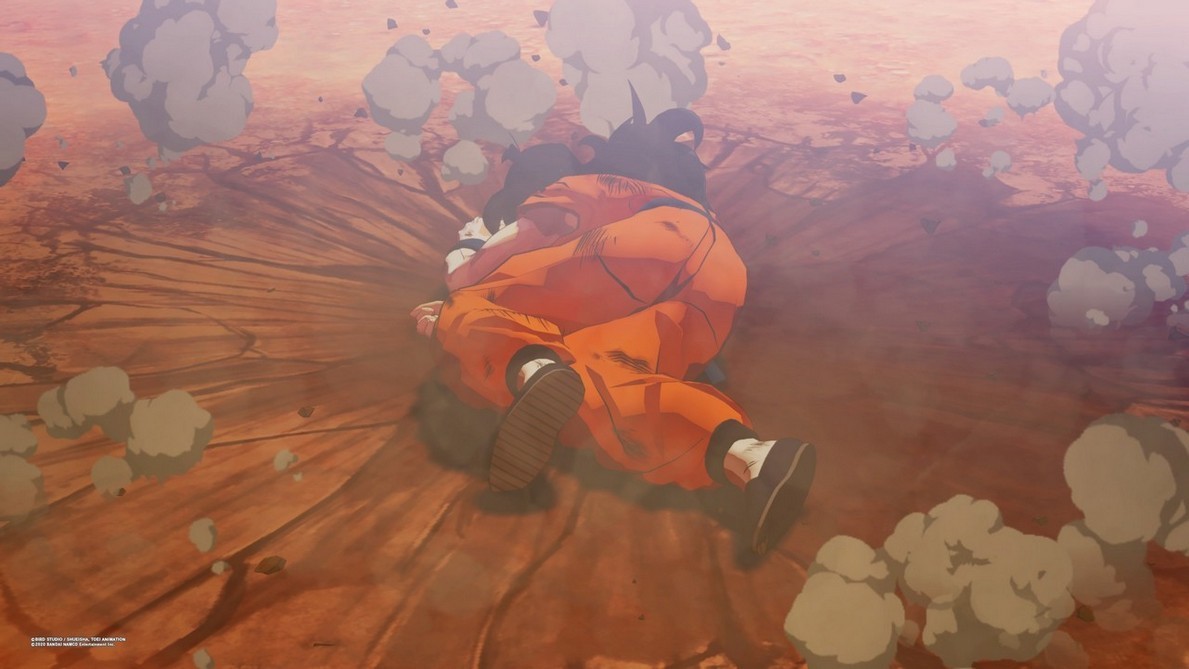 While it’s true that I really like and felt satisfied with how simple the battle system was, as I progressed through the game, I found that it sort of fell down intoto a repetitive cycle, especially with the overworld enemies as they just execute the same attacks over and over again. At least they included an interesting way to avoid these battles, all you have to do is to fly at full speed and hit enemies immediately ending the battle. It’s not easy to full off, but it’s incredibly satisfying if you do.

A thing that feels a bit underwhelming is how the leveling up works in this game, which made for an playthrough that lacked a certain challenge personally. Like what I mentioned above, boss battles provide tons of experience points so you won’t be behind, but on top of this, the game provides your characters with experience points as the story progresses. So there are times when you’ll be surprised with how much experience you get out of nowhere, meaning there’s not much reason to go for side quests. Z orbs are necessary to unlock upgrades for your skills though, so picking up a few while flying is a must. 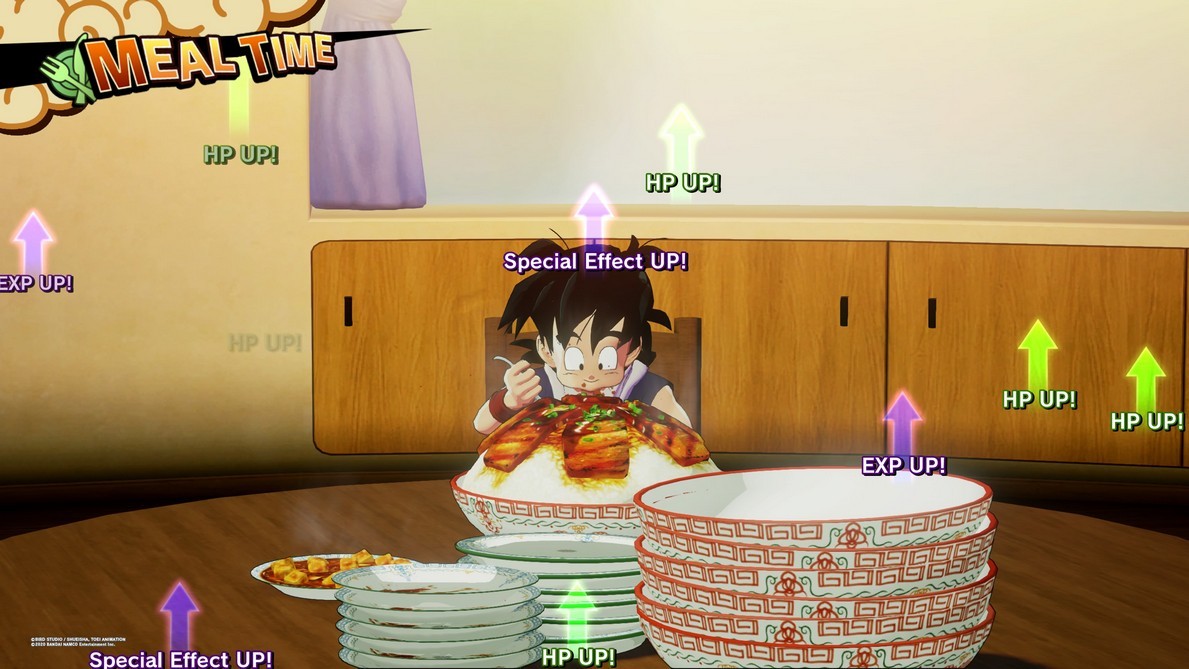 Speaking of flying, exploring the open world is limited to the area based on your current main story progress. Transitioning between open areas is also not the best; for example, there’s a long loading screen when you travel between the Korin Tower and Kami’s lookout — two buildings that are supposed to be connected with each other. Trust me, everytime you’ll enter another area, you’ll eventually come to hate that loading screen. The open area and cities are huge and is nicely detailed much like the anime, so knowing that you can only do much in it feels a bit disappointing. This makes the open world exploration feels half-baked.

Another thing that could’ve been improved is the menu system. The menu looks simple, but it’s actually not as tons of things that you have to access are hidden behind sub menus that can be really confusing at times. Even to this day, I still can’t find some of theunlockables that I gathered throughout my journey in my journal. 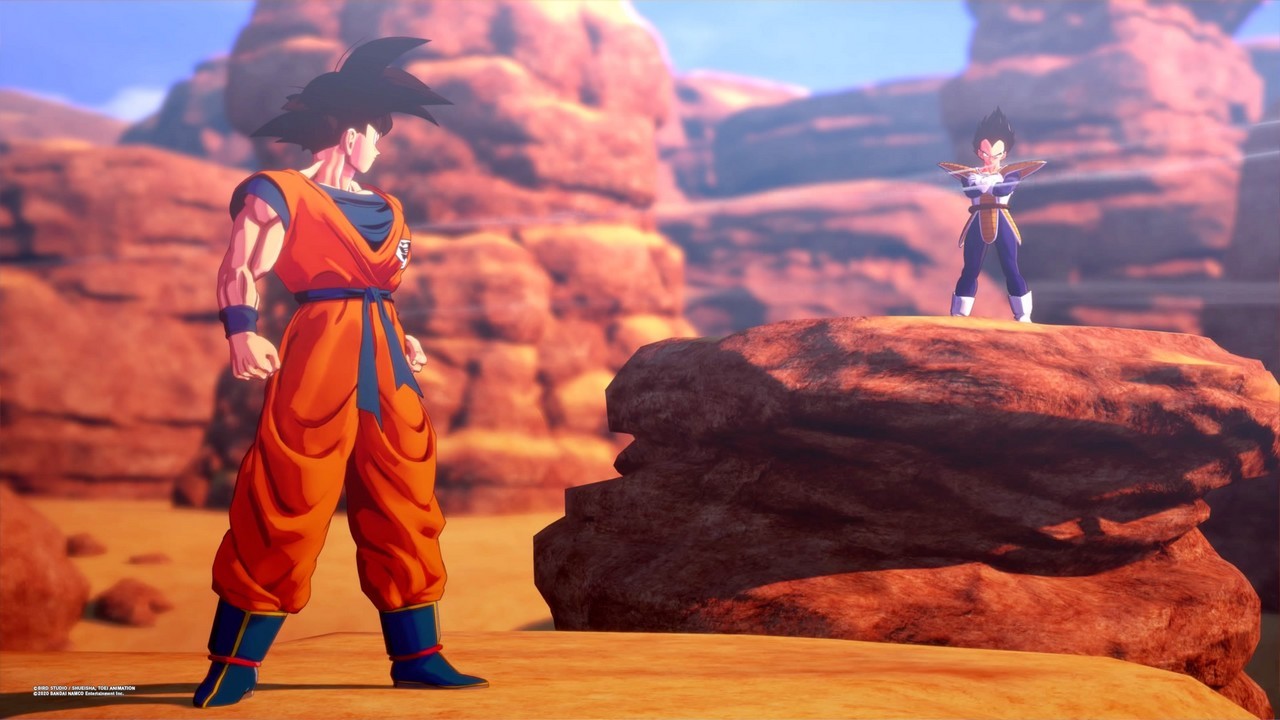 Dragon Ball Z: Kakarot doesn’t exactly offer anything new when it comes to open-world anime games. There’s also the fact that it tells a story that I’m sure all of us know by heart at this point (just with a couple of tweaks). But overall, Dragon Ball Z: Kakarot is a fun ride, especially for fans of DBZ. It offers a combat system that despite being repetitive still being fun that looks incredibly cinematic, and it has a wealth of things to do.

Personally, I wasn’t grabbed by the game’s myriad of side quests and mini-games, but I’m sure some fans will be into them. Even if you don’t delve deep into these optional stuff though, you’ll still have a fun time with Kakarot as the main quest itself will give lots of experience points, making these side quests optional for the most part. Although I wish that that there was more thought put into the open world aspect of the game as it really lacks some of the engaging qualities I found in other open world games. As for the replay value I’m just satisfied with just one playthrough, though there is fun to be had in a second playthrough for big DBZ fans.

Overall Dragon Ball Z: Kakarot offers a great re-telling of a classic story with fun combat and amazing presentation. If you’re a big DBZ fan, you’ll most likely be satisfied.