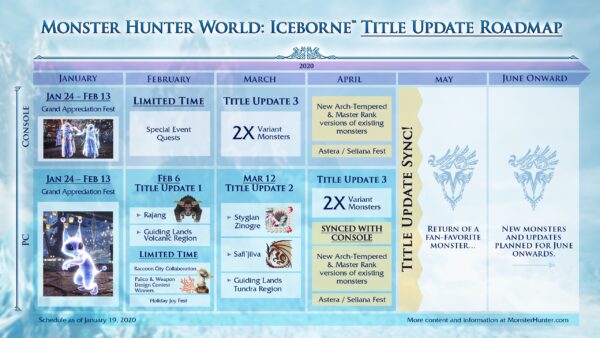 Capcom just recently revealed this year’s road map for Monster Hunter World: Iceborne, their most succesful game to date. Here’s all the complete details, starting from consoles followed by the PC:

Capcom today released a roadmap for upcoming free Monster Hunter World: Iceborne post-launch content updates for PlayStation 4 computer entertainment system, the Xbox One family of devices, including Xbox One X, and Steam (PC). In addition, Capcom has also confirmed that the timing for subsequent major Iceborne content updates on PC and console will sync starting in April 2020. In the meantime, both console and PC hunters will be able to celebrate the second anniversary of Monster Hunter: World with in-game events for players across World and Iceborne.

Following the recent PC release of the acclaimed Monster Hunter World: Iceborne, title updates for PC will begin in February. The free content will include challenging monsters for players to conquer, expanded gameplay features, limited time events and more. The centerpiece of the first PC title update on February 6 is the fearsome Rajang, the ruthless fan-favorite monster that offers a challenge for even the most seasoned hunters. A new Volcanic Region will be added to the end-game Guiding Lands, and becomes accessible once players have started the special assignment quest to battle Rajang. Popular survival horror icons Leon, Claire and Tyrant also pay a visit to Iceborne for the limited time Raccoon City collaboration, where hunters can acquire materials to craft Leon α+ and Claire α+ full armor sets plus three Raccoon City themed pendants to spruce up their favorite weapons. The first title update also brings the ability to visit other players’ rooms, and limited time quests that provide materials to forge the Hunter Weapon and Palico armor + weapon from the Iceborne Design Contest winners. Paid DLC options for room décor have also been added for those that wish to spruce up their place even more for guests.

On March 12, the second PC title update will star Stygian Zinogre, a more vicious subspecies of the electrifying fan-favorite Zinogre, that harnesses dragon elemental damage instead of lightning this time around. A new Tundra Region will expand the Guiding Lands further with a snowy landscape that’s home to bone-chilling monsters such as Barioth and Viper Tobi-Kadachi. As an added incentive, special materials exclusive to the Tundra Region can be used to further customize and upgrade weapons. Hardened PC hunters will also be able to attempt the challenging Safi’jiiva Siege to earn an arsenal of new Awakened weapons and craft powerful armor sets.

From February through March, console players receive new limited time event quests that increase the odds of encountering gold crown monsters, decorations, and Great Spiritvein Gems while maximizing their rank. A subsequent major title update brings two additional variant monsters to Iceborne, which will be available for console players in March and in April for PC. Later in April marks the beginning of major content updates for both PC and console being released on the same schedule. New Arch-Tempered and Master Rank versions of existing monsters will be available at the same time for both PC and console players, followed by the return of a fan-favorite monster in May. More synced updates and additional monsters will be available in June and beyond, with details coming at a later date.

From January 23 (PST) through February 13, players can celebrate the game’s second anniversary in either the cosmic Grand Appreciation Fest for Iceborne players, or the returning Appreciation Fest in the Astera Gathering Hub available for all players. Late February also marks the PC arrival of the limited time Holiday Joy Fest, providing a chance to get new layered armor, handler outfit, Poogie clothing and more. 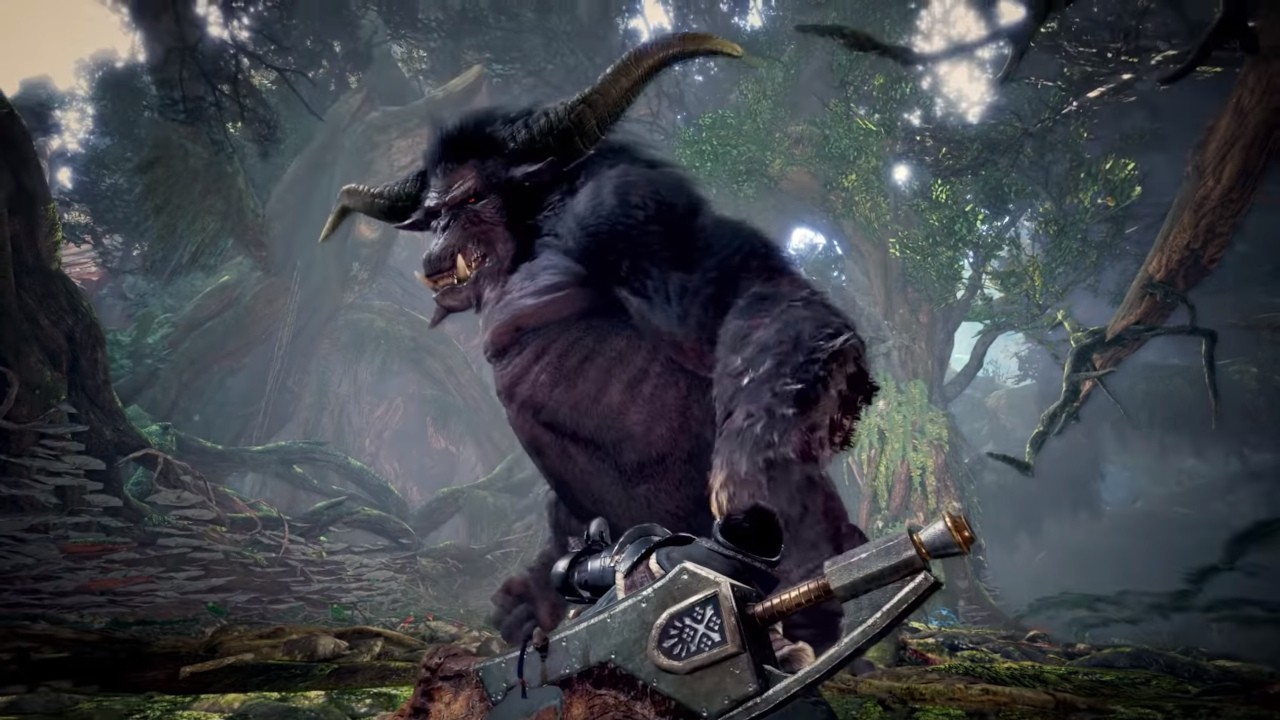 Perhaps the most interesting part here, aside from a fan-favorite monster returning in May, is that come April, both console and PC versions of the game will finally sync! Which means that PC gamers will enjoy all the updates that that the PlayStation 4 and Xbox users have been getting months in advance. Looks like 2020 is going to be a good year to get back into the hunt!

- Advertisement -
Previous article
Here are the Winners of the UG Holiday Gift Giveaway 2019!
Next article
The Samsung Galaxy Fold is now available in select PH stores