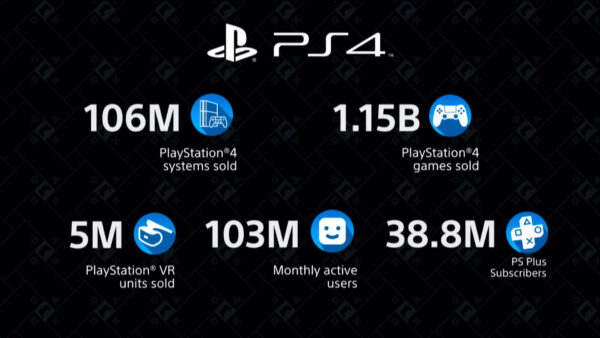 San Mateo, California – During the Consumer Electronics Show 2020, Sony Interactive Entertainment revealed some pretty impressive sales numbers for the their latest console, including the games and VR peripheral. Below are the latest figures:

“I am very pleased to see that so many PlayStation fans value the unparalleled entertainment experience on PS4,” said Jim Ryan, President and CEO of SIE. “This has been made possible by the support we have from our partners and fans since launching PlayStation in 1994, and I would like to truly thank everyone. We’ve consistently delivered innovative products like PlayStation VR, which has reached its 5 million unit sales milestone. There is much more entertainment experience to look forward to that the PlayStation ecosystem will provide that we can’t wait to share with our fans.”

SIE WWS will continue to deliver highly anticipated titles such as The Last of Us Part II and Ghost of Tsushima, further pushing the boundaries of play made possible by the PS4 system as it enters its 7th year. SIE will also focus on the distribution for amazing games from our partners, including unique experiences from indie game developers.

Those are some pretty impressive figures… And with the expected release of the PlayStation 5 this year, looks like console giant Sony is on the right track in continuing to provide the very best for consumers.