Patapon 2 Remastered Review | A PSP classic gets a 4K facelift 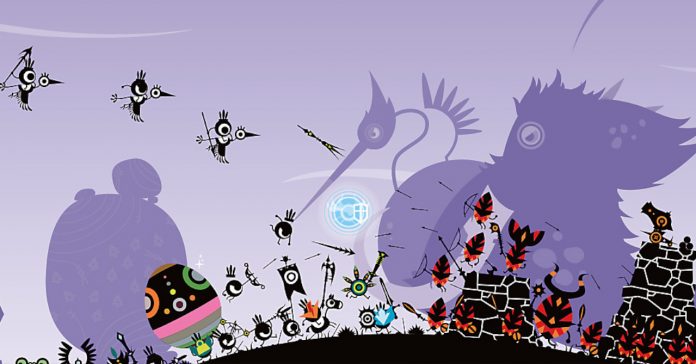 The funky tribe of tiny cyclopes is back with the recent release of Patapon 2 Remastered for the PS4. The remaster of the PSP classic brings back its catchy rhythm, but this time with a much bigger army and even better in up to 4K resolution.

Continuing their journey in search of the fabled Earthend, the Patapons and the Zigotons find themselves in a strange land after a shipwreck. There, they discover new foes and meet new allies while uncovering the mystery of the new land. Will they finally reach Earthend or be stopped by the evil that awaits them?

Gamers who’ve played the game on the PSP will no doubt know the answer. So the real question is — did the game age well after all these years? Or did they manage to miss the beat in this one? Let’s find out.

Rise of the Eyeball Army

Just to catch up to the whole story, after realizing that they did not reached Earthend and that the sun is not “IT”, the Patapons have concluded that they must cross the sea to find their promised land. Unfortunately for them, a creature attacks their ship and washes them on the shores of a new land. After answering the prayer of Hatapon, the player renews his/her contract as the “Almighty” deity of the Patapons, and guides them in this new land.

The game actually has a nice narrative to follow, with a surprising amount of depth to it especially if you follow the story of the series as a whole. Because of this, I do recommend that you play the first game before jumping right over to this one. But even if you skip the previous game, it won’t be too difficult to pick up on what’s happening.

The only problem though is that most of the time, characters deliver their dialogue during battle which can mess up your rhythm. Not to mention that those speech bubbles can overlap to each other, making them even harder to read. While not a big issue in the long run, it is worth mentioning, especially if you find rhythm games difficult. 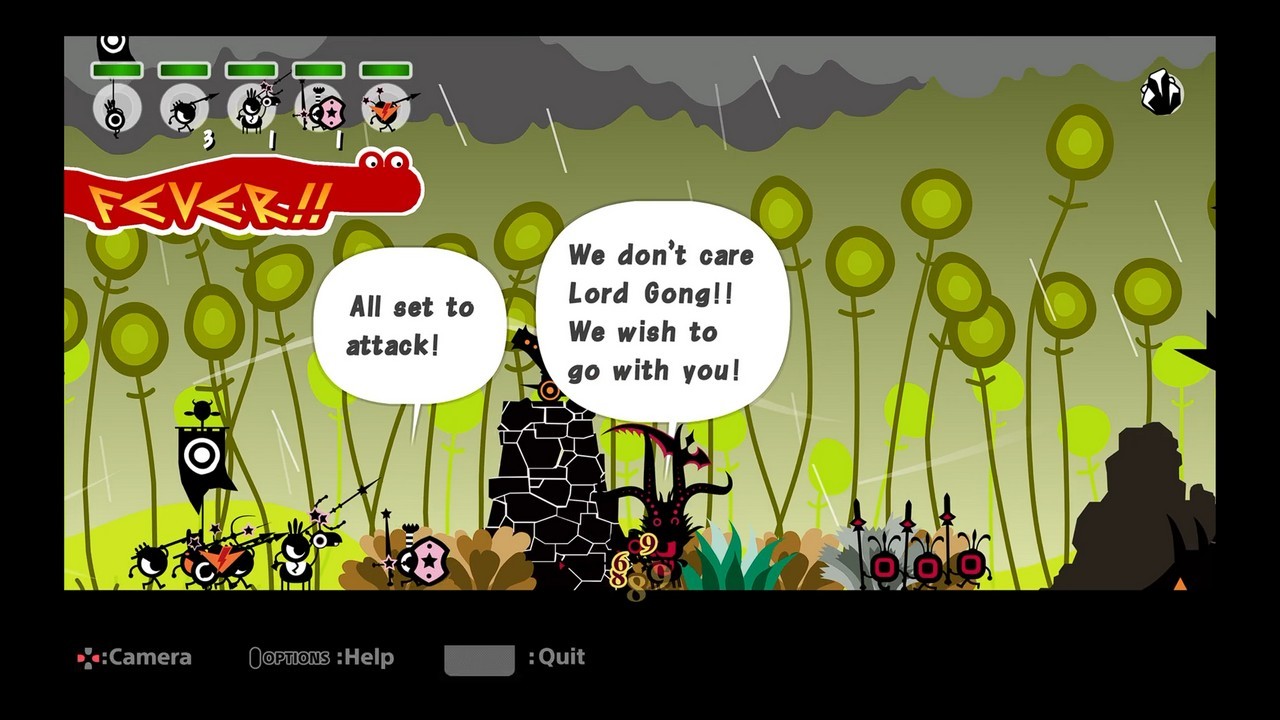 Moving on, the presentation is as wonderful as ever. In fact, the transition to the PS4 makes it even better thanks to the higher resolution. Despite all of the visual improvements, there are still a few rough edges, one of them being the noticeable black gap in the corner of the screen; I’m not sure if it’s the result of being a direct port from PSP with a smaller display, or if they made it intentional to see the flashing white border (beat assist). Not really a big issue, except for the fact that some assets still come in their original resolution which can be off putting to see with all of the other enhanced textures. 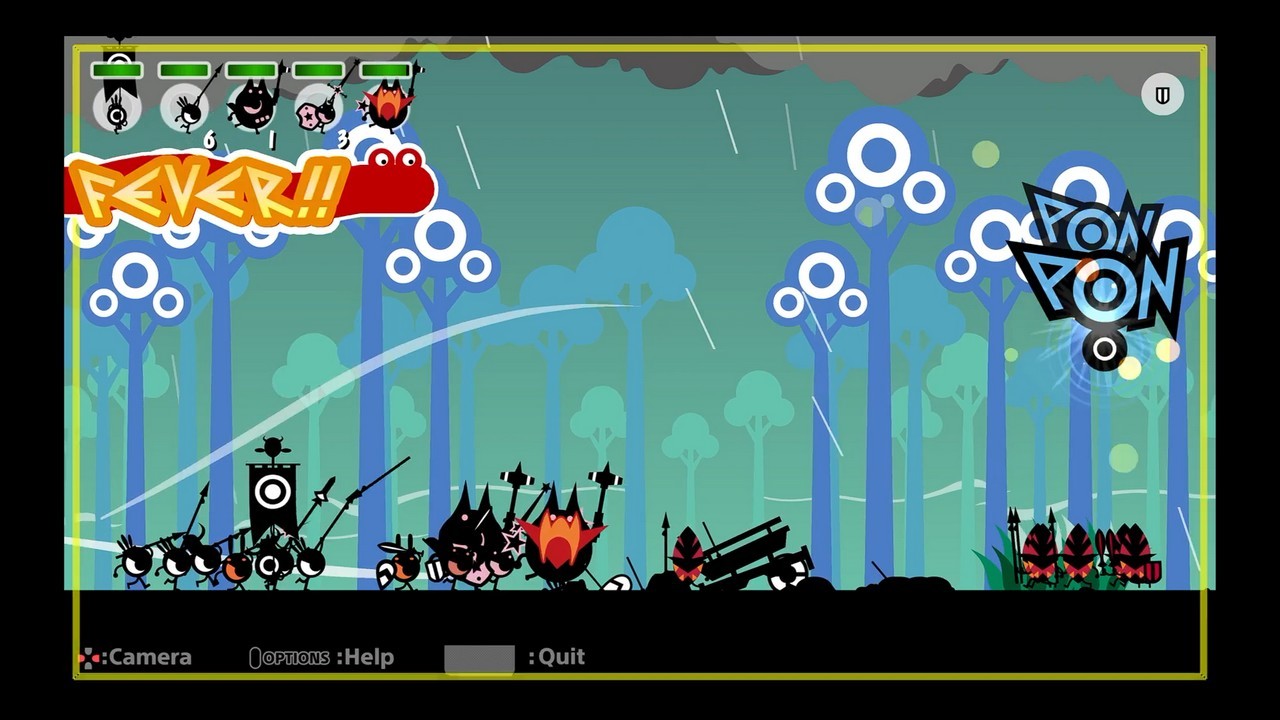 The biggest pleasure that the Patapon series provides is its unique gameplay, being a mix of both an RPG and a Rhythm game. You command your whole army during battle by executing the right command while following the rhythm on time. As you hit the proper beat, your army will take action; and depending on how precise those beats are, their attacks will become even more powerful, so does their formation while defending. If you hit multiple precise beats, your army will enter Fever mode that will intensify their attack.

Keeping the right beat is indeed vital for your journey, but item optimization is still a must as some enemies have elemental properties that you should consider before fighting, not to mention that weather can affect the terrain that you are currently traversing. If experimenting with equipment isn’t for you, you can always hit the optimize command to let your Patapon wield the best weapon in your inventory. 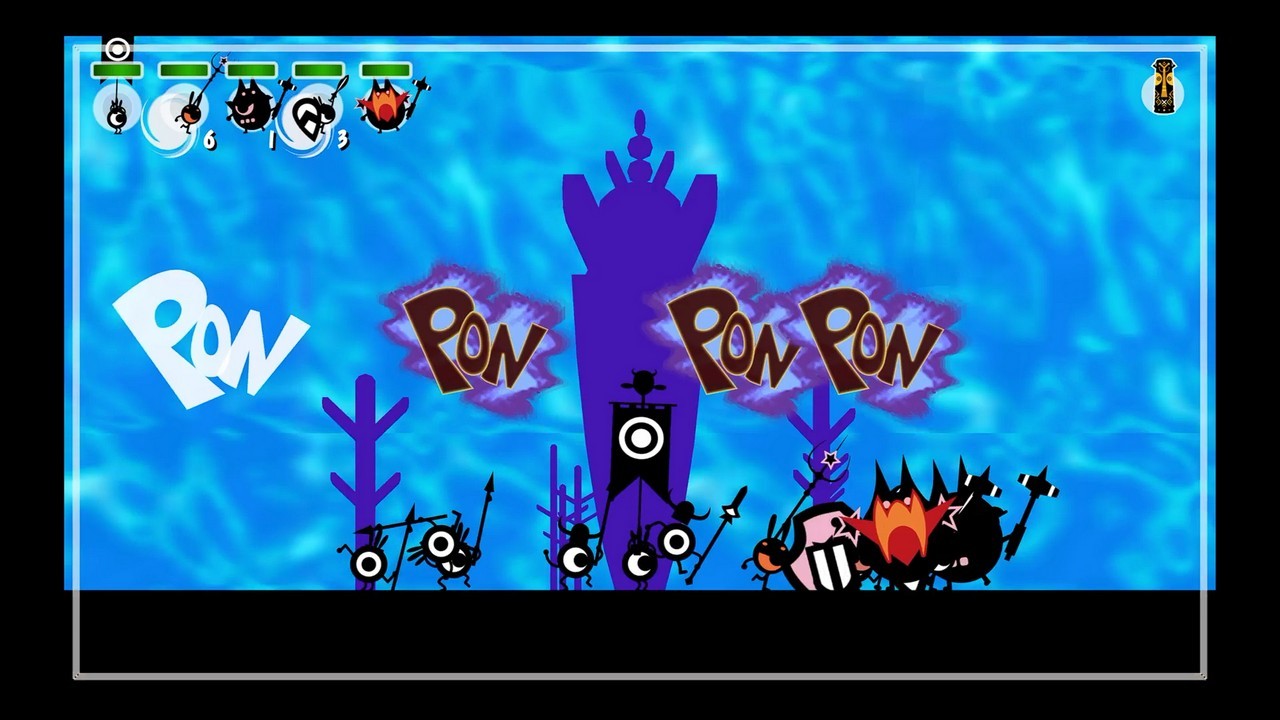 I’m going to admit, I suck at most other rhythm games that I tried before, even the original Patapon trilogy in the PSP before. To this day, there are still times where I can’t hit the right beat in proper timing, especially the cursed Don-DoDon-DoDon (X-XX-XX) command for miracles (I actually had to ask a friend to do it for me). Even for better players, there is a significant skill curve in the game.

It doesn’t help that there seems to be a bit of audio lag unlike the original, which might be the other reason why I missed most of the beat (definitely not denying that I suck). There is just this feeling of delay between the input and the sound. While I can’t prove it empirically, the feeling is there. Though playing with a good pair of headphones remedies this a bit. 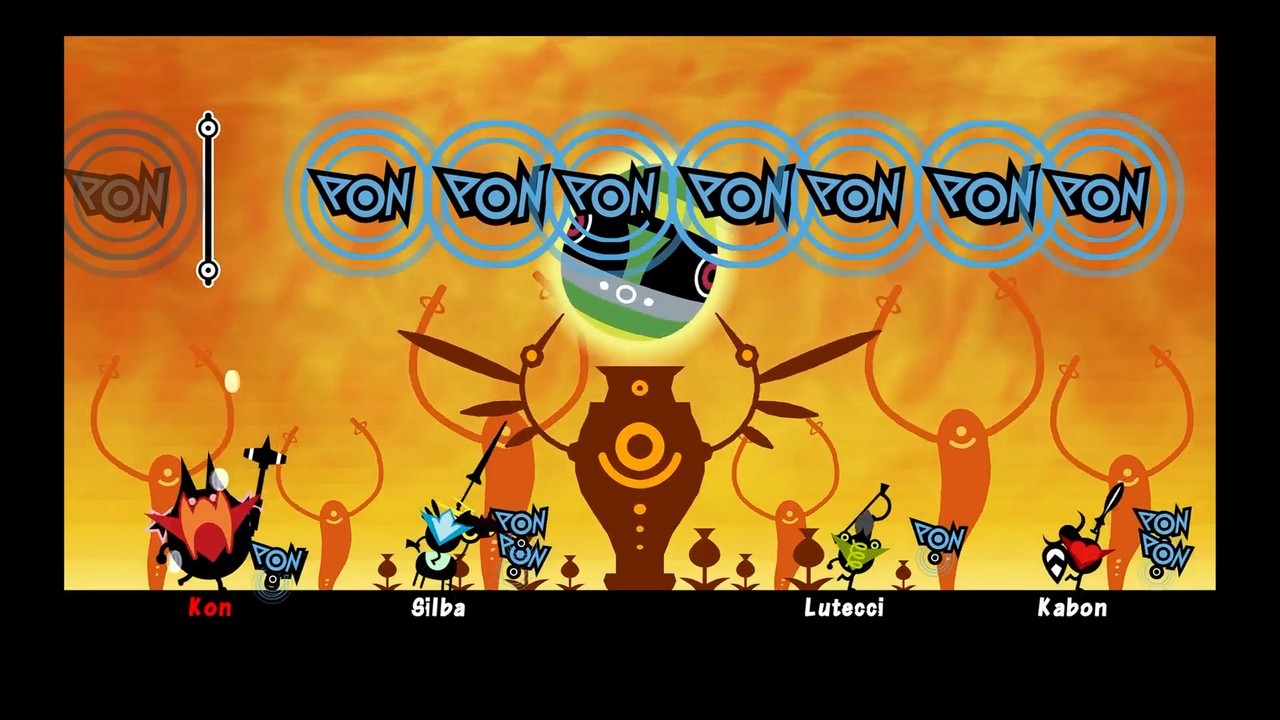 Another thing that I didn’t like is that this port had the original leveling system from the original game. Basically, the game has a tedious way of strengthening your army as you have to collect specific materials to level up.

Patapon 2 Remastered also removed the game’s multiplayer option, so instead of being accompanied by real players Patagate, you will be instead joined by CPU-controlled characters. While not a dealbreaker, local Patapon 2 multiplayer would’ve been great.

In spite of these issues though, I still enjoyed the hours upon hours of content that this game have provided. While the game’s main story is fairly short, the game’s content does provide a ton of replay value, with a plethora of minigames that you can unlock while playing through the story.

Patapon 2 is a one-of-a-kind game that’s definitely a memorable title for a lot of PSP owners. While this remastered version for the PS4 brings this lovable portable classic in high resolution, there are some annoyances in the new version such as audio lag. a frustrating leveling system, and a lack of multiplayer.

In spite of these though, Patapon 2 Remastered is still well worth playing for rhythm game fans thanks to its cutesy art style, interesting world, and unique mechanics.

Despite some flaws such as a bit of audio lag and frustrating leveling, Patapon 2 remastered is a game that's well worth playing for rhythm game fans thanks to its unique gamplay and memorable art style, all made even better with up to 4k resolution. Patapon 2 Remastered Review | A PSP classic gets a 4K facelift