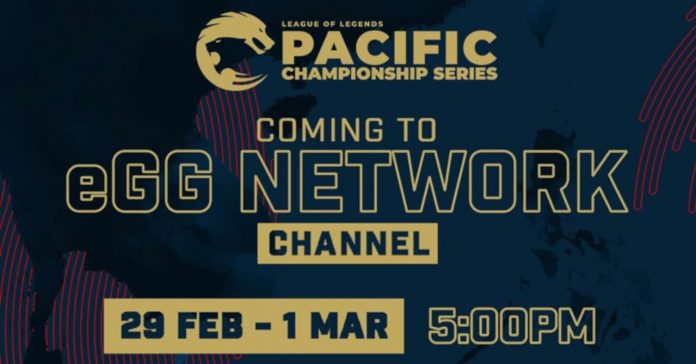 Great news, League of Legends fans! The LoL Pacific Championship Series (PCS) will air live on eGG Network. PCS Regular Season Week 1 begins this weekend, February 29 to March 1 at 5PM, and will continue every Friday to Sunday at 5PM daily until May.

As eGG Network is Southeast Asia’s main dedicated esports TV channel, fans from Malaysia, Singapore, Thailand, and the Philippines will be able to watch their home teams face off against each other, as well as the best squads from Taipei and Hong Kong. The SEA teams include Berjaya Dragons (MY), Resurgence (SG), Nova Esports (TH), and Liyab Esports (PH).

“The Pacific Championship Series combines some of our largest communities to create an exciting regional league with multi-city representation, and we’re thrilled to finally kick-start the games this weekend,” Chris Tran, Head of Esports, South-East Asia, Riot Games.

In case you’re unfamiliar, the PCS is a result of the merger between the League of Legends Master Series (LMS) and League of Legends Southeast Asia Tour (LST). Basically, instead of having separate series for SEA and Taipei/Hong Kong teams, Riot has integrated the said regions into one.

The PCS is just the start of eGG Network’s LoL coverage though, with the channel promising more LoL content in the near future.

Catch the PCS on eGG Network in the Philippines on Cignal TV CH99. The eGG Network channel is also available in Malaysia, Brunei, Singapore, Thailand, Indonesia, Myanmar and Australia.