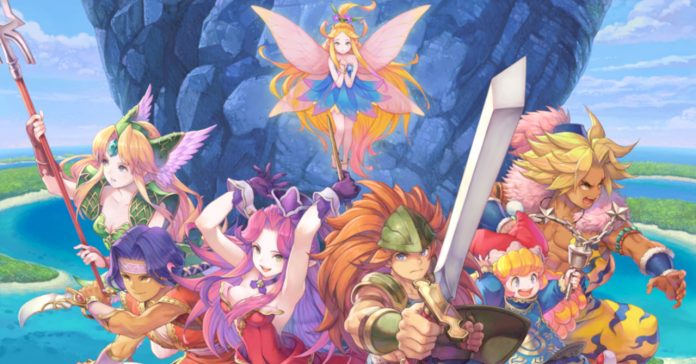 Back in 1995, Square released ‘Seiken Densetsu 3’ for the Super Famicom, and it’s the sequel to the JRPG ‘Secret of Mana’. The game was only released in Japan, though now players will have a chance to play this JPRG classic with the ‘Trials of Mana’ remake which releases on April 24 on PS4, Switch, and PC.

Not sure if you should get it? Well the good news is that Square Enix is releasing a free demo for Trials of Mana, and it releases today at exactly 12 noon! The demo releases on these three platforms:

The free demo is described by Square Enix as:

“The demo begins with your chosen hero’s opening chapter as they set out into the world, companions at their side. Culminating in the battle with the dreaded Fullmetal Hugger, this taste of the full quest to come guarantees no shortage of thrilling content. Which party members you take on this adventure is entirely up to you. Also note you will be able to seamlessly resume your journey in the retail version using save data from the demo.”

Users who pre-order or early purchase the retail/digital editions of the game will receive the in-game bonus gear, Rabite Adornment. This time grants a character more EXP in battle until level 10.

For retail copies, the download code for the item will be included in first print versions. For digital downloads, pre-orders will be accepted until Thursday at 11:59 p.m., April 23, 2020.

PS4 and Steam owners of the game will also receive the following:

- Advertisement -
Previous article
Expect possible ‘FF7 Remake’ delays in the Philippines due to the Quarantine
Next article
My Hero One’s Justice 2 Review (PS4) | Going Further Beyond!