Is Dreams for the PS4 worth getting if you don’t like making games?

Media Molecule's new title is impressive, but is it for everyone? 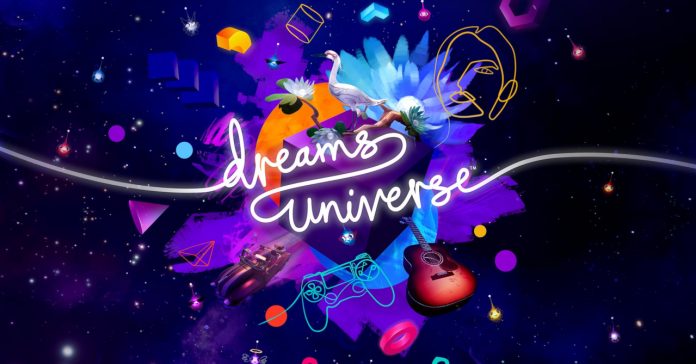 Following its initial reveal back in 2013, Media Molecule has finally released its game creator ‘Dreams‘ (Dreams Universe in select regions) last month, and it received rave reviews. Critics praised Dreams for its incredibly deep and robust game creation system that, while having a steep learning curve, is still approachable for most everyone, even for those with little to no experience in making games.

Based on the praise heaped upon it, Dreams is very much worth getting if you’re even a tiny bit interested in making your own game. But what if you just don’t like creating games? Is Dreams still worth buying? That’s what I wanted to find out when the folks over at Sony Interactive Entertainment Singapore gave us a game code for Dreams Universe.

Here’s the thing; I love games, I could spend all day playing them, but I just never had the urge to make a game of my own. Sure, some game concepts pop up in my mind from time to time, but I never really considered acting on them. This is partly due to the fact that I lack creativity, and also because I just don’t have the perseverance (and interest) to learn game creation.

Given my lack of interest in creating games, I have to admit, I wasn’t that excited for Dreams. Considering the praise that it received though, I was more than willing to check the game out.

Dreams starts off with a tutorial section that teaches basic movement, after which more tutorials follow which teach how to create, place, and manipulate objects within the dream shaper. Following these are even more tutorials which teach more advanced concepts such as creating complex 3D objects, programming logic, keyframe animation, and many more.

I have to admit, I didn’t play through every tutorial; in fact I only played the beginner’s tutorial section before stopping my dream shaping experience. That’s not to say that the game creation in Dreams is bad though, quite the opposite in fact — I found the initial stages of game creation surprisingly intuitive, even if there’s a bit of a learning curve to it. It’s just that game creation doesn’t interest me. 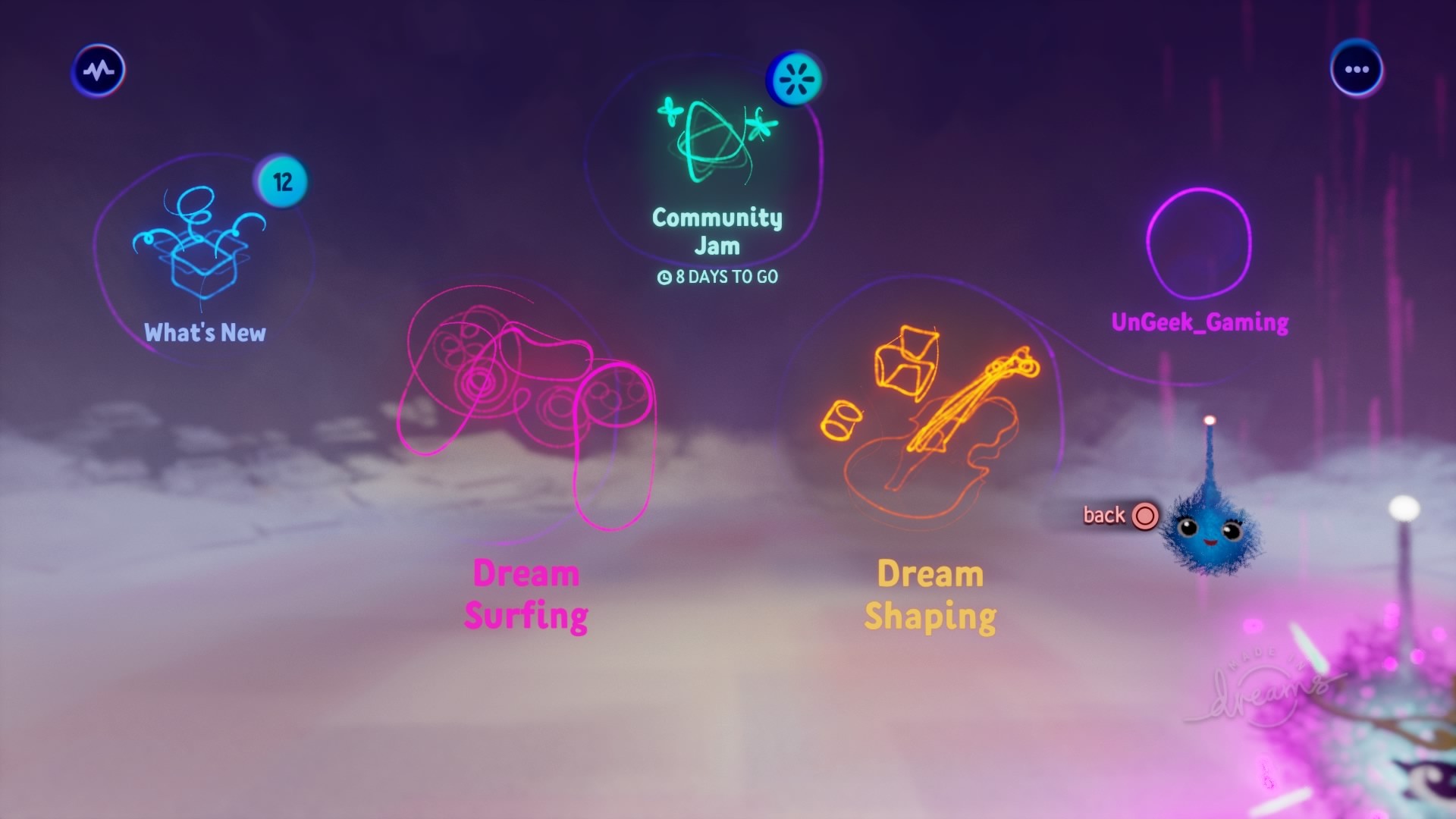 Thankfully, the game’s various tutorials are not mandatory. After an initial intro that lasts less than an hour, the game allows players access to Dream Surfing — Dreams’ game browser. In Dream Surfing, players can access all the wonderful (and sometimes weird) creations of fellow Dreamiverse denizens.

One of the main highlights of Dream Surfing are the games created by Media Molecule themselves. The game that everyone with Dreams should definitely try out is Art’s Dream, a game that showcases the full extent of what’s possible in Dreams. Even though the game was created entirely using the creation tools in Dreams, Art’s Dream has a quality that matches (or even exceeds) a lot of popular indie games.

Of course, games made by Media Molecule will definitely be good. So what about titles made by Dreams users? Well, I was surprise to find out that there are already a ton of great community-made games on Dream Surfing.

Some of the highlight games I’ve played include Ommy Kart, a fun kart-racing game. There’s also Art Therapy, a game that lets you smash sculptures in a museum with the aim to cause as much monetary damage possible; as well as Blade Gunner, a shoot-em-up that oozes style.

Probably most memorable games in Dreams for me though is a recreation of PT. Sure the Dreams version of PT doesn’t have the hyper-realistic feel of the original, but it’s an impressive recreation that captures the claustrophobic and terrifying feel of the Playable Teaser.

Aside from games, players can also create animated videos and visual experiences in Dreams given its robust creation system. There’s even a dedicated space in Dream Surfing for videos and experiences. Some of the interesting ones I found include detailed recreations of the black hole scene from the movie Interstellar, as well as the intro of The Lighthouse.

Experiences like these in Dream Surfing aren’t just limited to movie homages though, there are also a lot of other original creations such as High Seas Piracy, an audio-visual experiences that’s like a JMW Turner painting that came to life.

That’s the great thing about Dreams, there’s just so much content from incredibly creative Dreamers; and this is just the start as there are bound to be even more user-created games/experiences as time goes by. Right now, there are a lot of promising titles that are in the early stages, so it’ll be interesting to see how they develop in the coming months.

What makes it even better is that Dream Surfing is well-made, both for creators and gamers. Creators in Dreams can access the back-end of titles in Dream Surfing. This means that if players are inspired by a certain game they discovered while Surfing, they can learn how it was made; they can even integrate objects made by other Dreams into their own. Meanwhile, gamers will love how fast everything loads in Dream Surfing, with games needing only a couple of seconds before starting up. 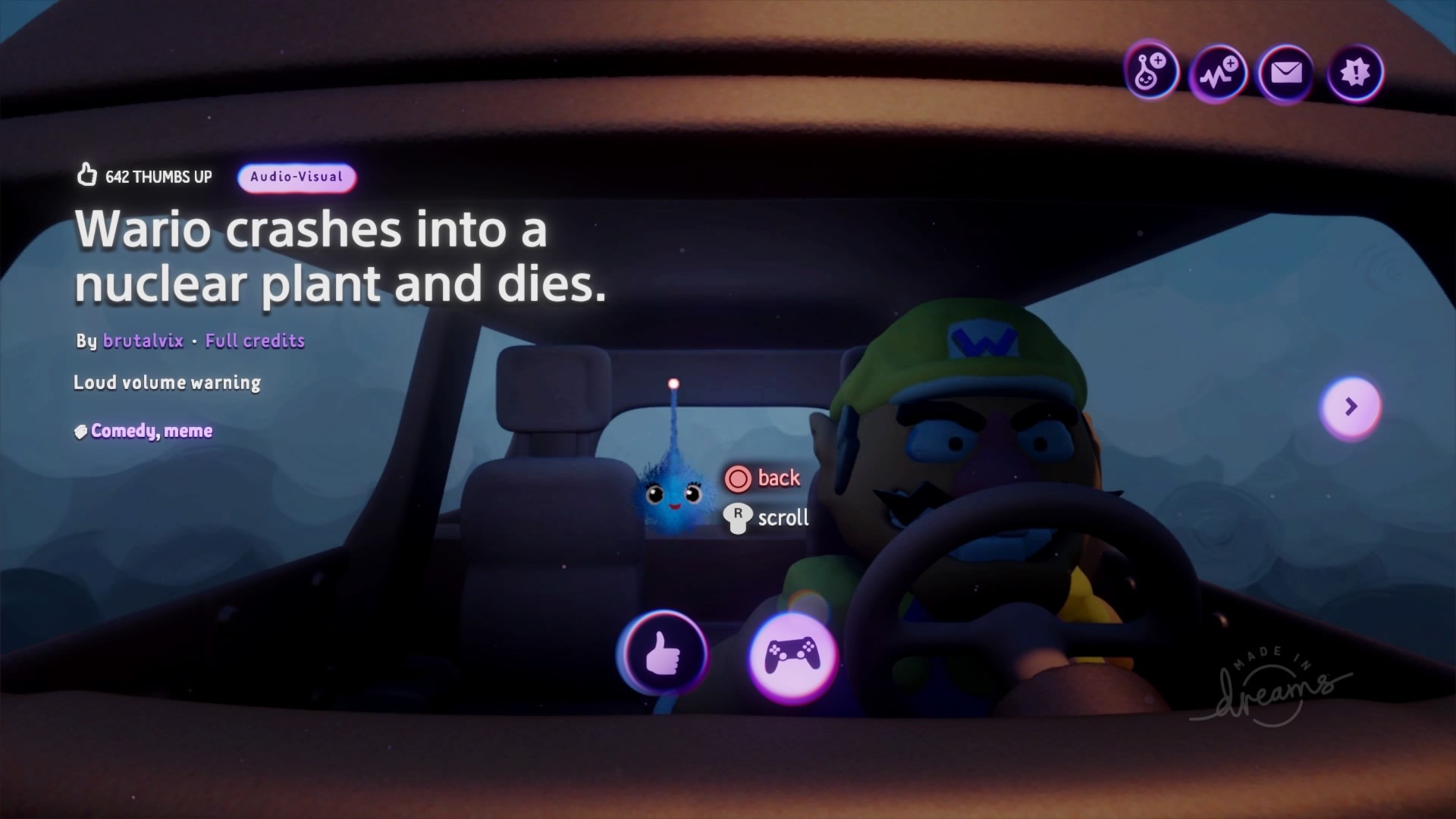 The only real issue with Dreams moving forward is proper curation. There’s a fear that well-made titles might be buried under the vast amount of draft-level content. Though with a proper system, this shouldn’t be an issue. Plus, there’s something funny about surfing through glitchy, low-effort creations. 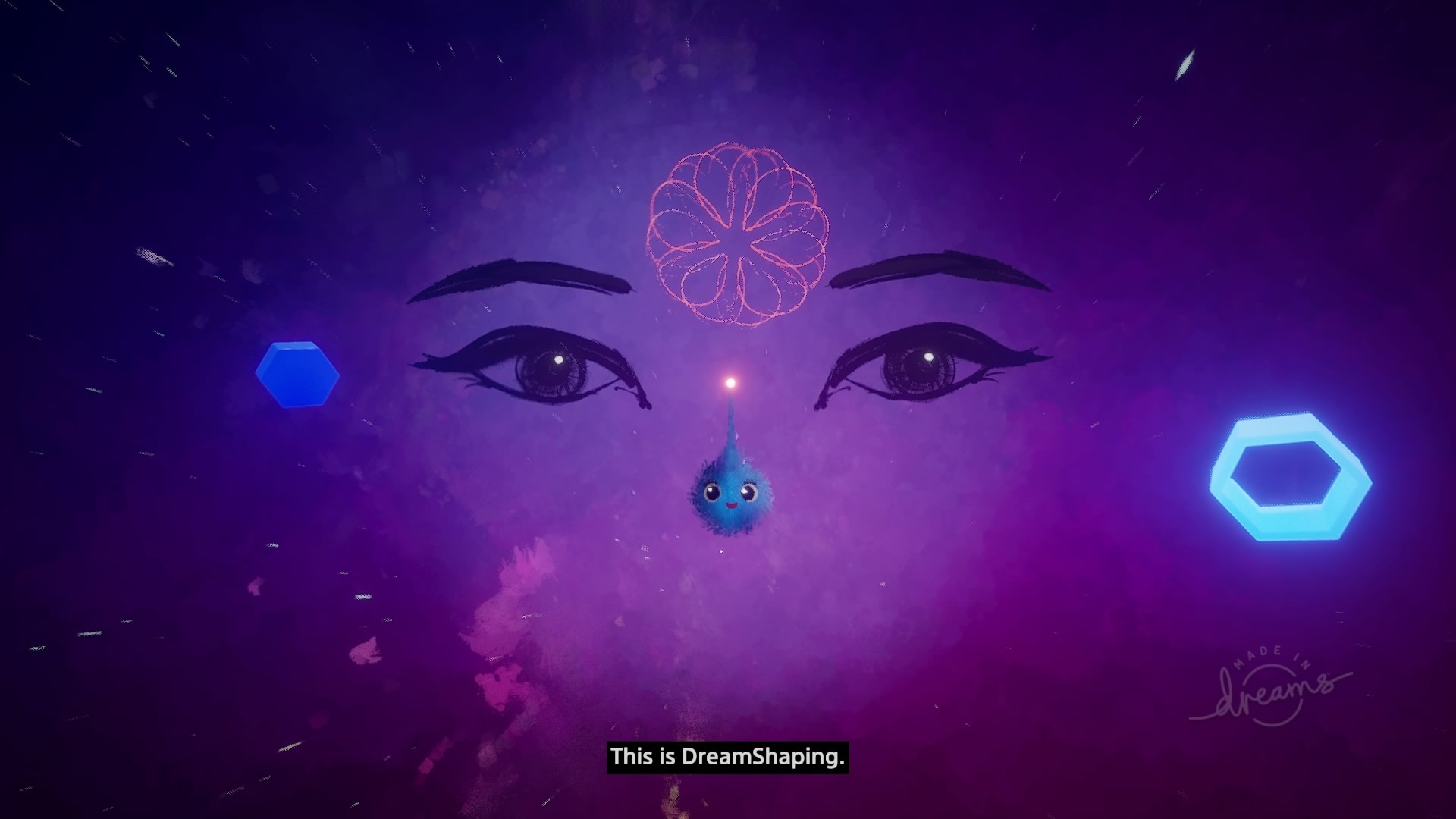 So is Dreams worth getting if you aren’t interested making games? The answer is a definite yes! Even if you don’t touch game creation at all, there’s a ton of fun to be had thanks to the myriad of games, animations, and audio-visual experiences that will provide hours upon hours of content. And even if you don’t plan on making games anytime soon, you might just stumble upon an experience while Dream Surfing that will make you want to shape a dream of your own.