A sequel that goes further beyond its predecessor! 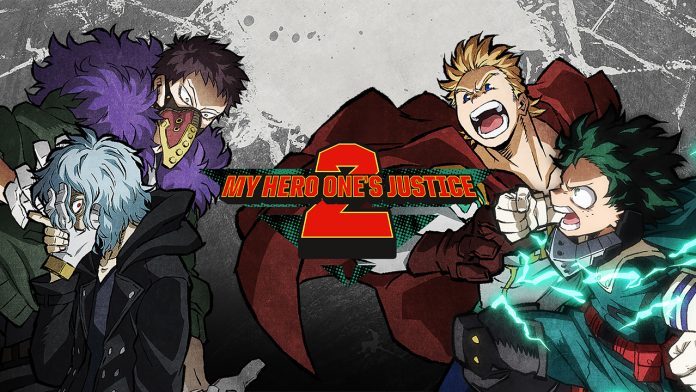 My Hero Academia is one of the most popular anime and manga series of the past few years, becoming a mainstay of annual top-selling manga and most-watched anime lists, so it isn’t surprising that a number of video games based on the series would be made and released. Two examples are Byking and Bandai Namco’s 3D arena fighting games, My Hero One’s Justice from 2018 and its sequel My Hero One’s Justice 2 which came out just last week.

Like many anime-based arena fighting games, My Hero One’s Justice and My Hero One’s Justice 2 somewhat lets players experience the anime and manga’s events firsthand by retelling the story of the series while letting players fight during its many combat sequences. Aside from that, the games feature several gameplay modes typical of many fighting games in the market such as a free battle mode, an arcade mode, and more.

As for My Hero One’s Justice 2, it doesn’t just continue where the story of its predecessor left off, after the end of the fight between All Might and All For One, but also features a facelifted interface, a significantly expanded roster, new gameplay features, and a lot more changes and improvements. All of these help elevate the game and go beyond its predecessor, not just as an anime-based video game but also as a fighting game in general.

(Almost) Everyone is Here! 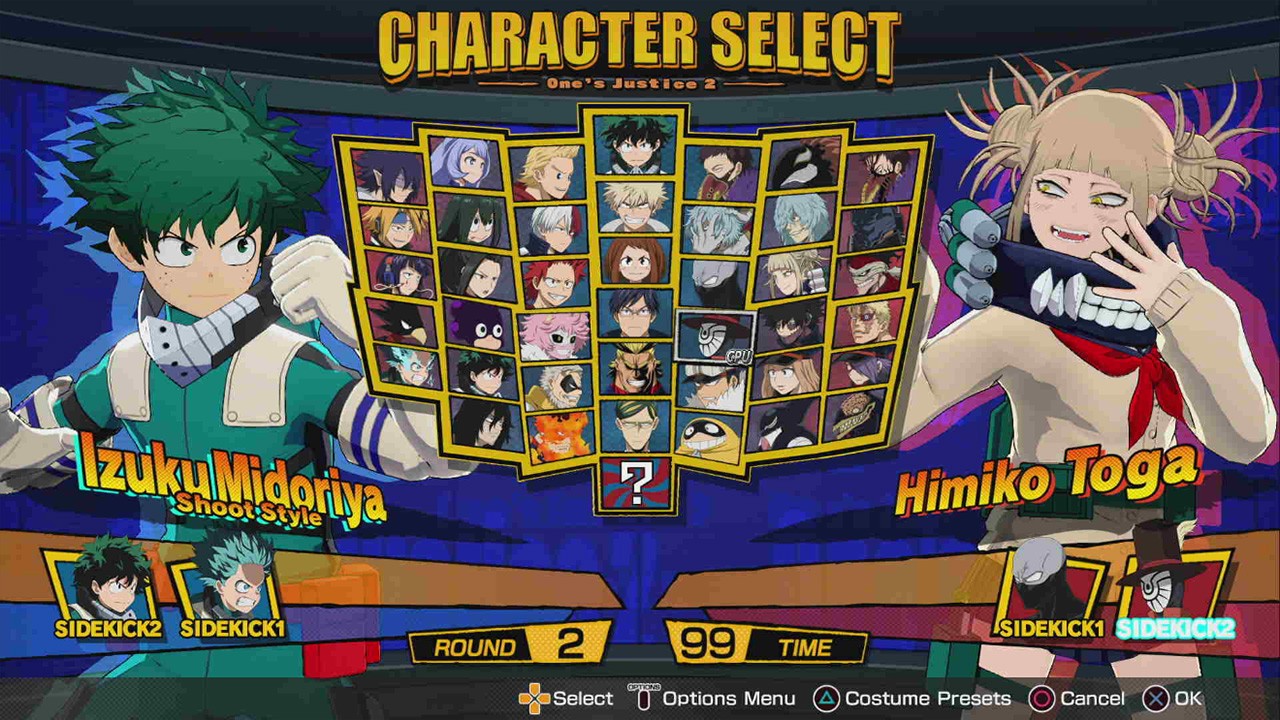 First off, My Hero One’s Justice 2 features significantly more characters than its predecessor, with 23 returning characters and 18 additions making a total of 41 playable characters. This is partially helped by its setting being further down the story of My Hero Academia so more of the series’ characters have been introduced and can become playable, including the Big Three of U.A., more members of the League of Villains, and more.

One of the more important elements to making a fighting game more attractive to a larger audience is the quantity and quality of its roster as it gives players not only more options to choose from but a better experience per character. And in the case of My Hero One’s Justice 2, it not only features a significantly larger roster than its predecessor but the popularity of the anime and manga also make its characters easily recognizable.

Being able to form a team with U.A.’s Big Three or a team with three Dekus (yes, there are three versions of Deku in the game) was definitely an amusing experience. Being able to play as one of the game’s many villains was also pretty interesting, which also showcases just how much effort Byking has put into translating each of the characters traits, abilities, and Quirks from the anime and manga into the game. 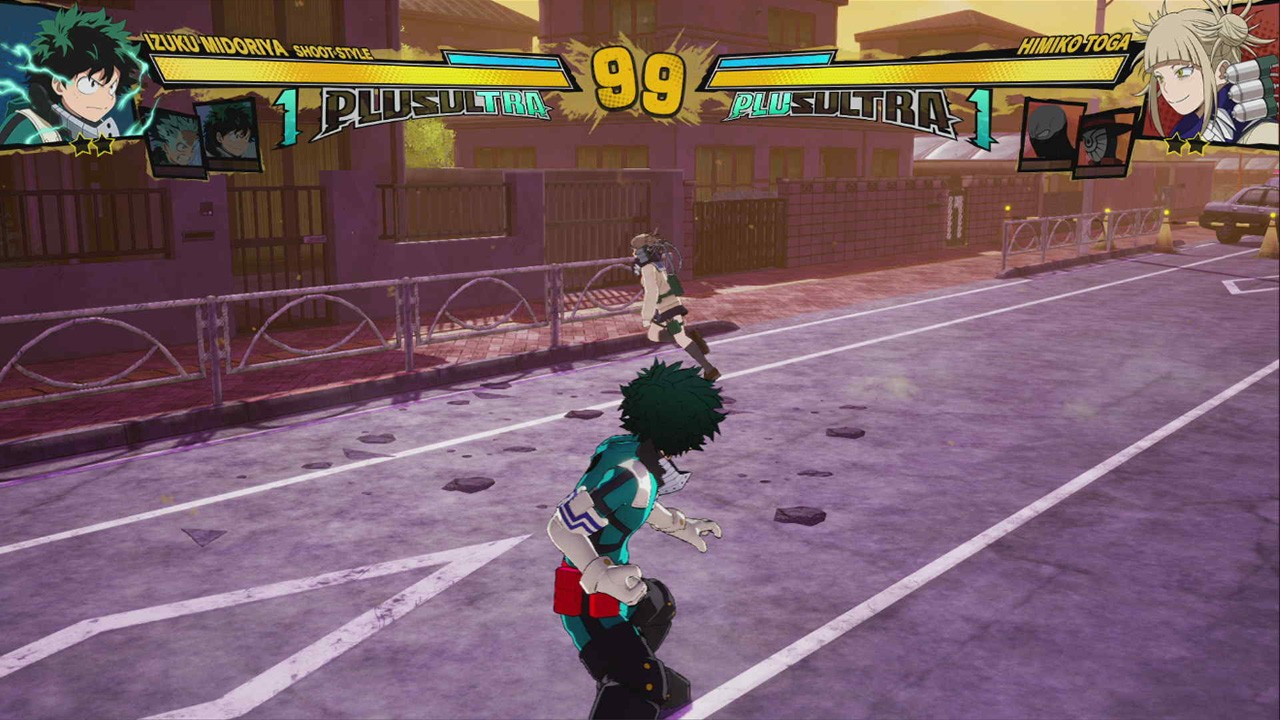 Byking has also done a great job updating the My Hero One’s Justice 2 interface. From the menus, fonts, and colors to the character portraits, in-match meters, and more, the interface of the game looks much more in line with the anime and manga’s visual style and aesthetic. The developers have definitely put in a lot more thought and time into the game’s interface design to help it look less plain and more attractive and engaging.

One of the most notable changes is the in-match UI that’s been completely revamped. From originally being just three plain-looking bars for the health, super, and guard meters, they’ve now been changed to not only look more distinguishable but flashier as well. The health and stamina meter are now larger and trapezoidal while the Plus Ultra or super meter is literally now the outline for the words Plus Ultra.

The game’s 3D visuals are mostly the same with only a slight improvement but the graphics and visual effects were already impressive to begin with. The cel-shaded models look incredible and the flashy combat effects make the gameplay exciting. The only weakness of the game’s visuals are its stages that look quite dull and disconnected from the rest of the game’s visual style. The environmental destruction also looks lackluster with some wonky physics. 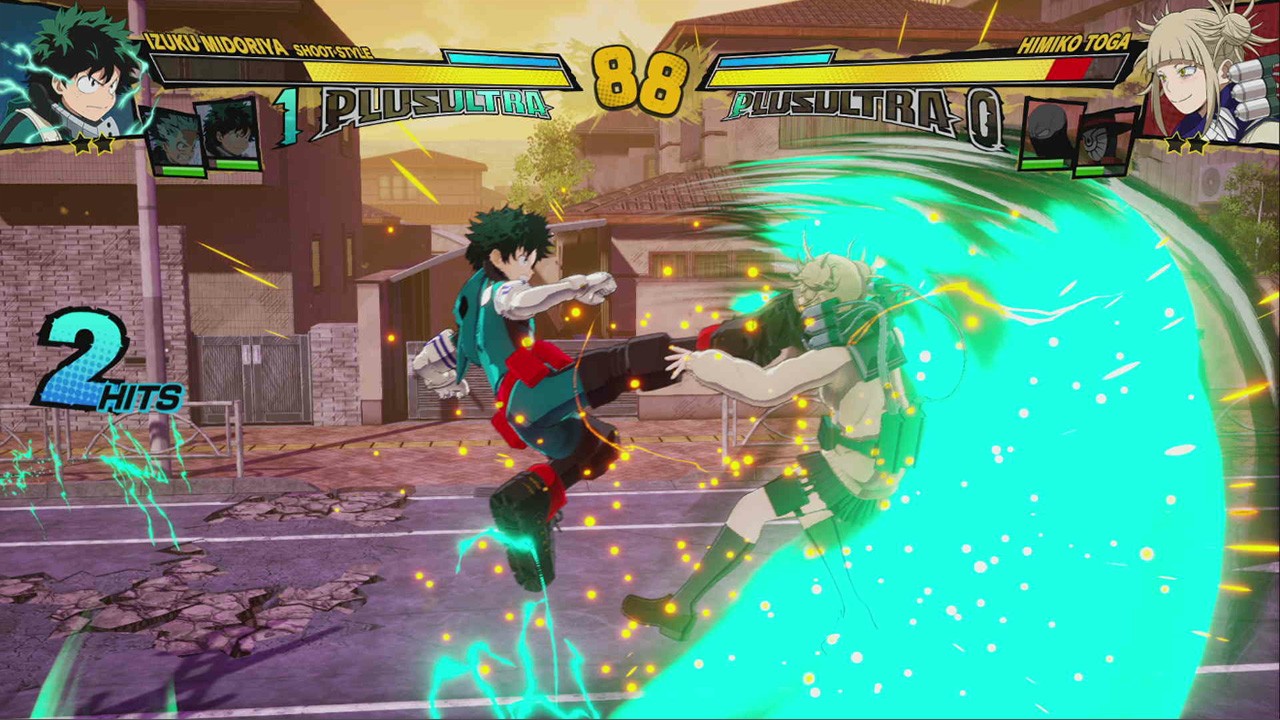 As it is an arena fighting game, the core gameplay loop of My Hero One’s Justice 2 is the arena fighting. To start with, you have a normal attack and two special attacks. Combining those with the analog stick or shoulder buttons gives you access to more moves, including armored and unblockable ones. You can also jump, dash, airdash, block, and sidestep, as well as perform guard cancel counter hits when you successfully block.

You’ll also have two sidekicks to assist you during the match in several ways. Their assist move can be used as a combo extender, as a way to safely get out of a blocked combo, to stop or break an opponent’s combo, and more. Unlike the first game, you’ll also be able to use your sidekicks’ Plus Ultra move as well as perform a Team Plus Ultra if you have enough super meter available for either. So choosing sidekicks that synergize well with your character is important.

As previously mentioned, Byking has done a very good job translating each of the characters’ traits, abilities, and Quirks from the anime and manga into the game, which provides a roster with a ton of variety in playstyles and gimmicks. Aside from expanding its roster of characters, Byking also gave some of the returning characters completely new movesets, which gives old players even more to try out.

The developers have also changed several elements of the gameplay to help it feel like a deeper or more serious fighting game. The characters don’t float as much when they’re in the air and the gameplay generally feels a bit faster than it previously did. They’ve also changed the dash canceling mechanic to be meter-based rather than limiting the players to just one per combo. So players will have the option to use more dash cancels or their assists for combo extensions.

You Can Become a Hero (Agency) 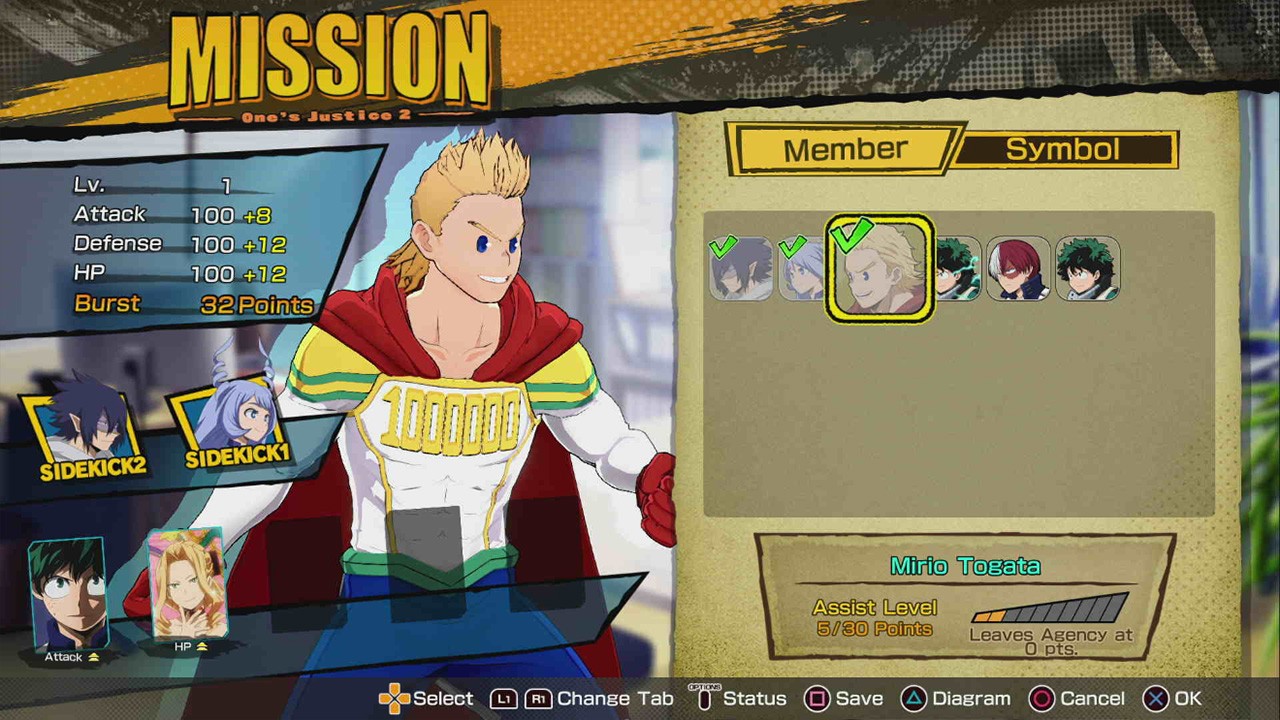 The game modes of My Hero One’s Justice 2 are pretty much the same as the original, including the Story, Mission, Free Battle, Arcade, Training, Online/Network, and Training. While most of the modes are self-explanatory and can be seen in other fighting games, the Free Battle and Mission modes come with new and interesting features that potential players might be interested in checking out.

Firstly, the Free Battle comes with a new feature that lets you play with 4-players. Two players will control the main character while the other two will be able to summon and fully control any of the two assist characters until they get hit and must wait until the assist gauge recharges. While the mode has a few issues, such as targeting and online restrictions, it’s an interesting gimmick that groups of friends can enjoy and the developers can definitely iterate on in the future.

As for the Mission mode, it allows you to create your own hero agency and recruit any of the available heroes or villains using the collectible in-game currency. You then choose a team of three (a main character and two assists) and accept missions that take place on maps consisting of different paths and fights that you have to complete before your stamina runs out to finish the mission. The maps feature both fights and items to help you keep going. 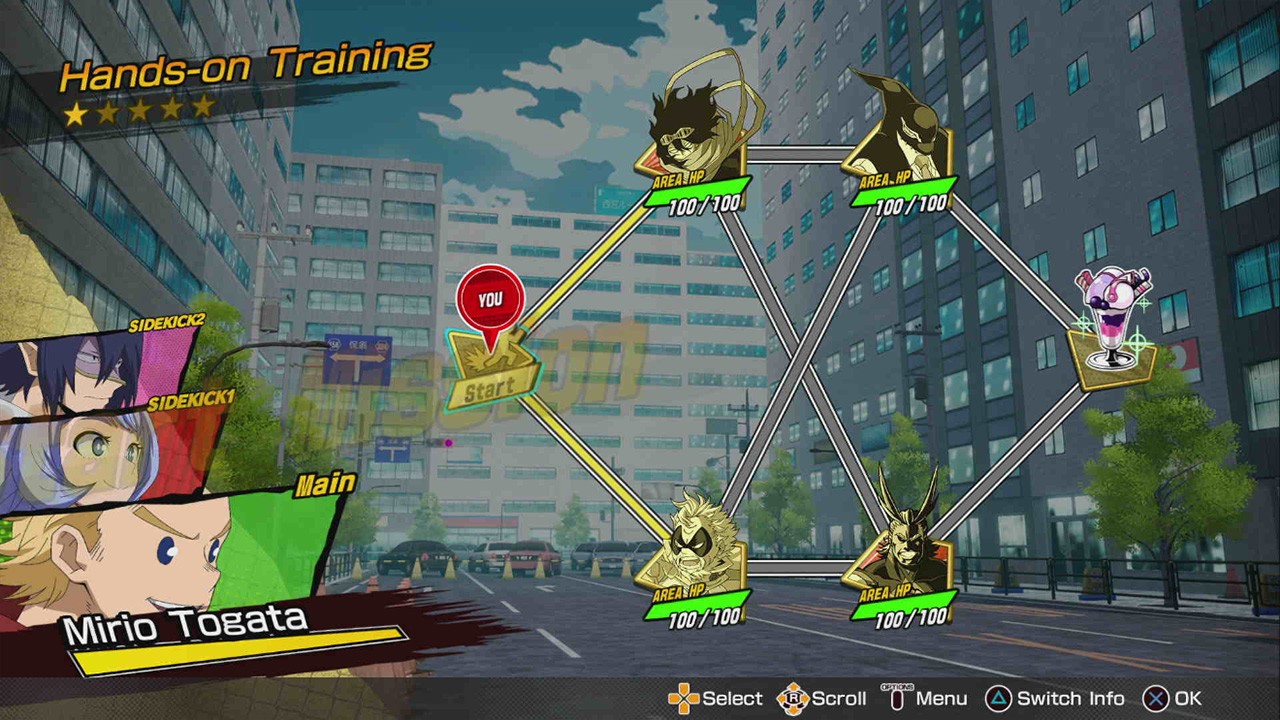 In Mission mode, you’ll also be able to level up your characters and equip buffs to increase their stats and give them special traits to help them do better in the harder missions. The opponents may also be equipped with buffs, making some of the fights rather amusing and difficult. It’s an interesting mode that gives the game some replayability although the mode can become quite grindy if you plan on leveling up all the characters.

As the full roster of the game is instantly available, the content that you end up unlocking as you play its different game modes and using the game in-game currency are cosmetic items that you can customize the characters with. Several pieces of the character’s outfit can be changed, including their general costume, arm, head, face, neck, body, leg, and even their voice packs. Wanting to unlock all the cosmetic items is a nice incentive to keep playing the game.

The game’s larger roster of fun and unique characters, its significantly better-looking interface, and its improvements to gameplay all make for a rather enjoyable arena fighting game experience. The small additions and changes to the game’s mechanics help it feel like a deeper and more serious fighting game that the developers can iterate even further in future instalments. Fans of My Hero Academia will definitely enjoy getting to play with their beloved heroes and villains from the manga and anime, especially with the game’s different modes and character customization. My Hero One’s Justice 2 is definitely one of the more interesting arena fighting games in the market right now and fans of the series or fans of arena fighting games in general should check it out.

Previous articleA Free Demo of the ‘Trials of Mana’ remake releases today in the Philippines
Next articleSquare Enix releases more ‘FF7 Remake’ screenshots, including Honeybee Inn and many more

My Hero One's Justice 2 Review (PS4) | Going Further Beyond!My Hero One’s Justice 2 is a significant step up over the original and shows that the developers at Byking are genuinely serious at improving the game’s many elements from visuals to gameplay. While there’s still a few things that can be improved, there’s definitely a lot of things that they’ve done great.