Truly a game that you shouldn't miss! 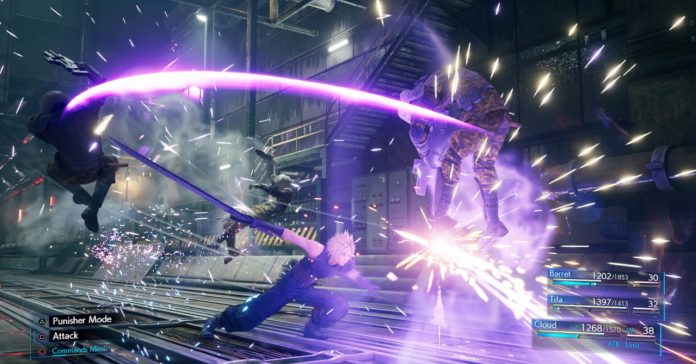 It has been over a week now since the long-awaited Final Fantasy VII Remake was released, and I still can’t get the game out of my head. The Remake is an incredible expansion of the original FF7’s Midgar intro, and it also made me fall in love with its cast of characters who are even more fleshed out in this outing. As much as I loved a lot of things about FF7 Remake, what really stands out in this game is no doubt its combat system.

When the Remake was first announced back in 2015, some fans have been skeptical on how Square Enix will handle the game’s shift from semi turn-based to a full-blown action system. Fans were worried that the move to make the game more action-oriented would mean that the tactical depth of the original FF7’s active time battle (ATB) system would be lost, and that the game would transform into a button-mash fest. Thankfully, FF7 Remake’s combat succeeds in giving players intense action, all while improving upon what made gamers fall in love with the original ATB system in the first place. 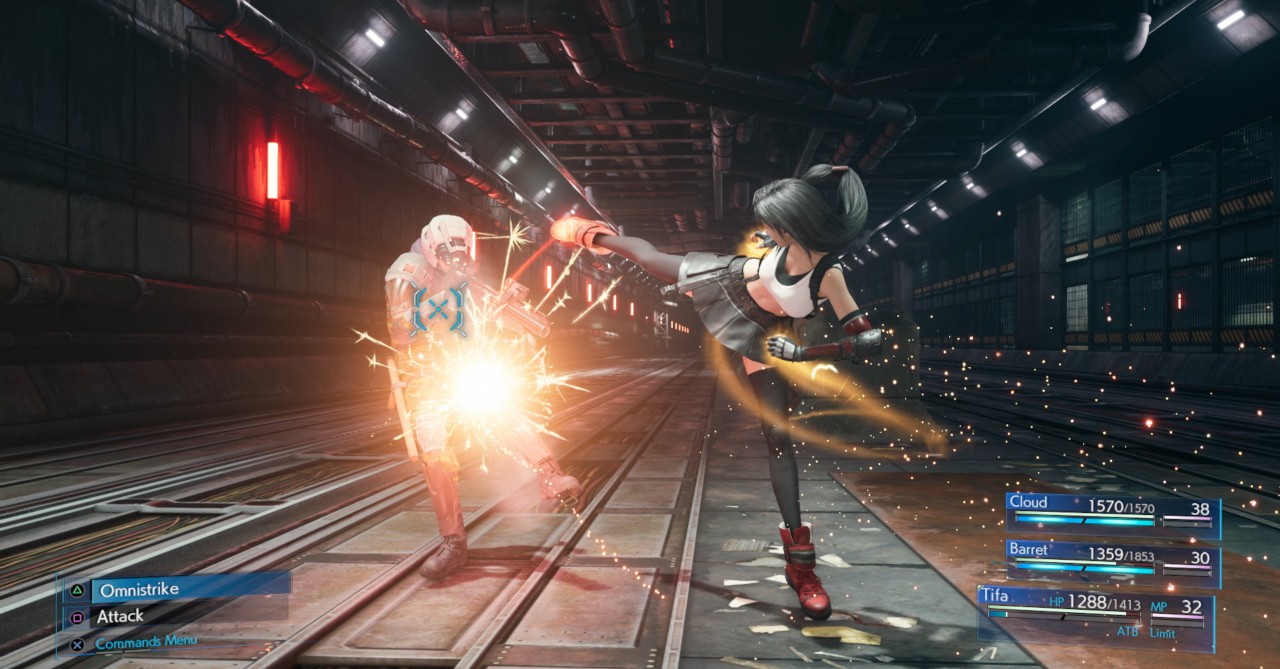 In case you have not played the game or haven’t seen any gameplay videos, FF7 Remake has real-time combat where characters have basic attacks, as well as the ability to block and dodge. Each successful basic attack charges a character’s ATB gauge; this is important as spells, abilities, and items can only be used once one ATB bar is full (each character has two bars).

Early into the game, it can be tempting to just rely on mostly physical attacks to beat enemies, with only a couple of spells/abilities thrown here and there. It might work at first, but you’ll quickly find out that mashing the attack button isn’t a viable approach for most enemies, especially for bosses. Tougher enemies won’t go down to just basic attacks, instead you have to look for a weakness and exploit it. Some enemies are weak to a certain element (like fire or lighting), while others require you to use specific moves or target certain weakpoints. For most of these weaknesses, the answer is a spell or an ability, both of which require a full ATB bar. 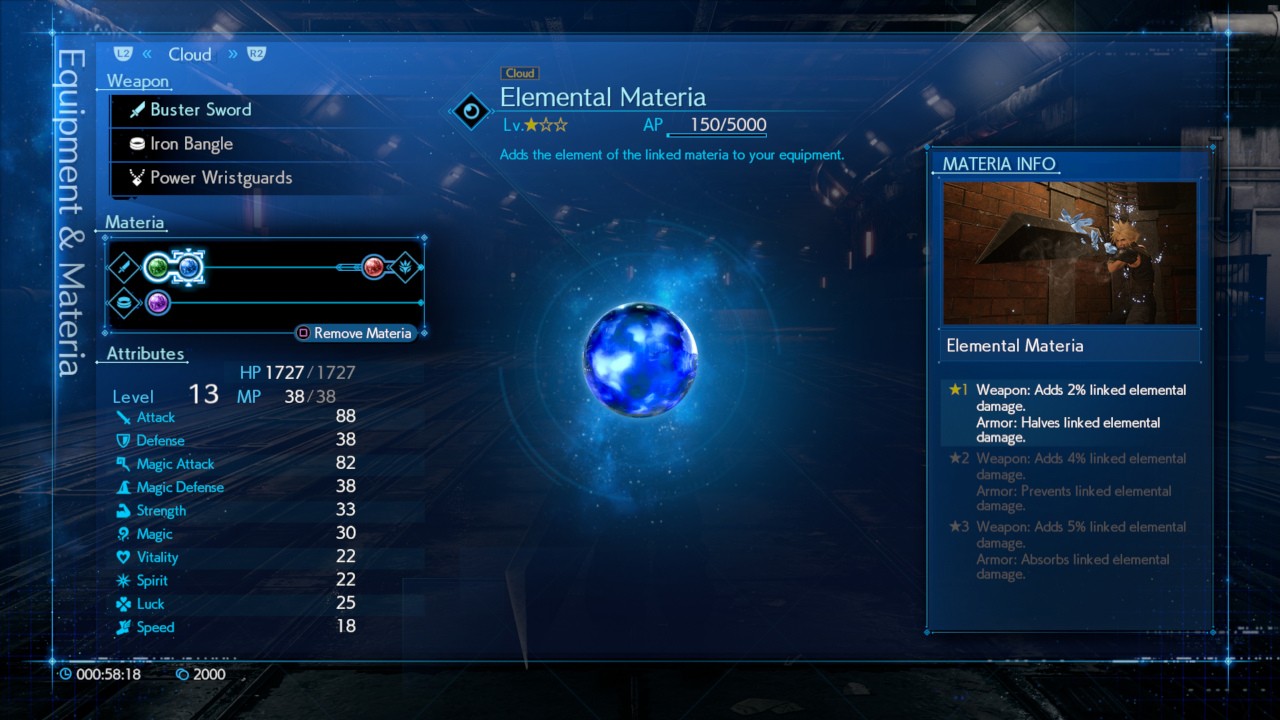 This system of tying together basic attacks to using abilities already makes for exciting combat, but that’s not all there is to the game. The original FF7’s materia system makes a return in the remake, and it’s just as great here as it was back in 1997. If you aren’t familiar with how it works, basically you’ll need to equip materia orbs to your weapon and armor in order to use magic or other abilities. This means you can customize what kind of magic each of the characters can use; for example, you can equip everyone with a Cure spell, or you can instead give one to your dedicated healer to free up more slots for other characters. The flexibility of the materia system isn’t made just for you to mix and match to your liking though, having a good setup is key if you want to take down the game’s myriad of bosses.

For instance, some enemies are weak to ice, some may not take kindly to poison attacks, and others are resistant to nearly all types of magic. Because of the wide variety of enemies that you’ll face, it’s next to impossible to equip all the useful materia to Cloud; you’ll have to spread out the materia you’ll need to Barret, Tifa, and Aerith. Good thing you can issue commands to them in the middle of the battle, so Cloud doesn’t have to do all the work. 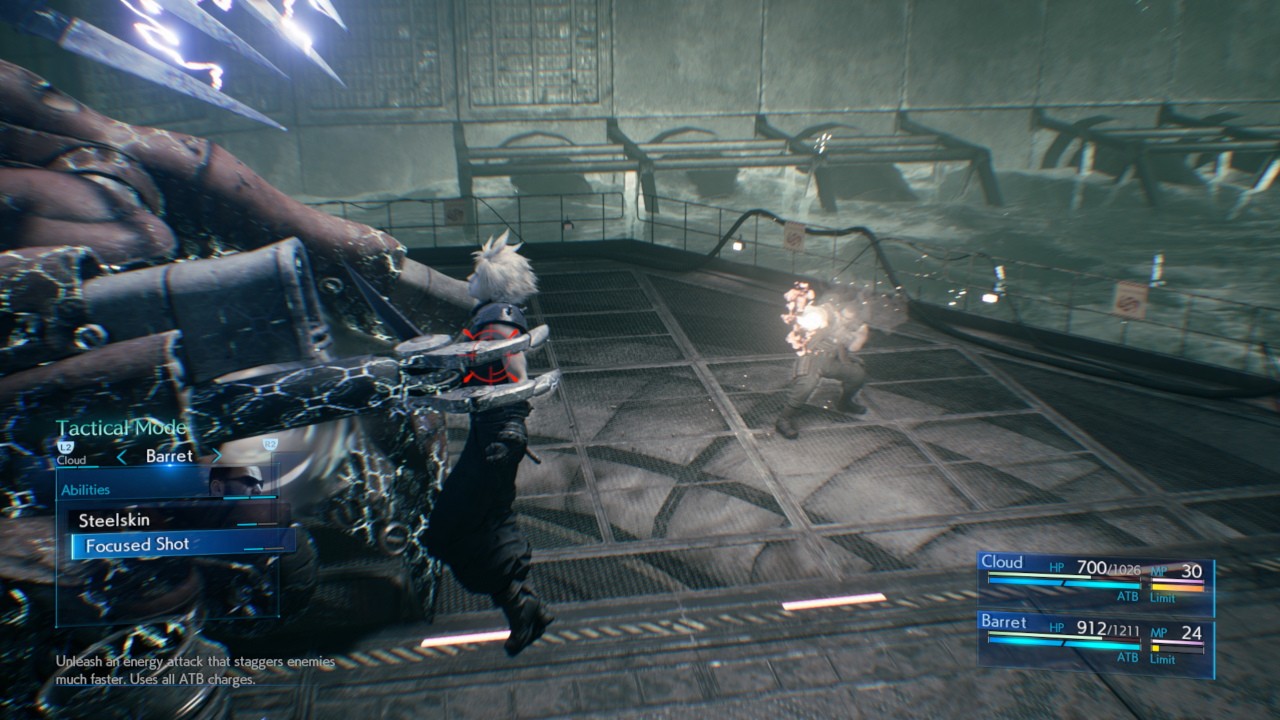 To use spells/abilities and issue commands to other party members, you should press the circle button or one of the triggers to bring up a menu where you can select what to use and on which target. Don’t worry, time slows to a crawl in this menu to give you time to choose what to do. Of course, each character will need one ATB bar to use a spell/ability; this is where the game truly shines.

During gameplay, you’ll only be able to move and attack as one character at a time, though you can switch between which party member you’re controlling on the fly. Switching characters may be quite difficult or disorienting at first, but learning it is key to taking full advantage of the game’s combat. When you’re controlling Cloud for example, your other party members will play defensively and gain ATB charge very slowly, they also won’t use spells or abilities on their own. This means you’ll have to take control of other party members to get their ATB charge up quickly; doing this is important, especially when an enemy is weak to a certain attack/spell that’s can only be used by Barret or Tifa for example. There’s also the fact that enemies tend to concentrate their attacks on the character you’re controlling, which you can use to your advantage when someone is low on health. 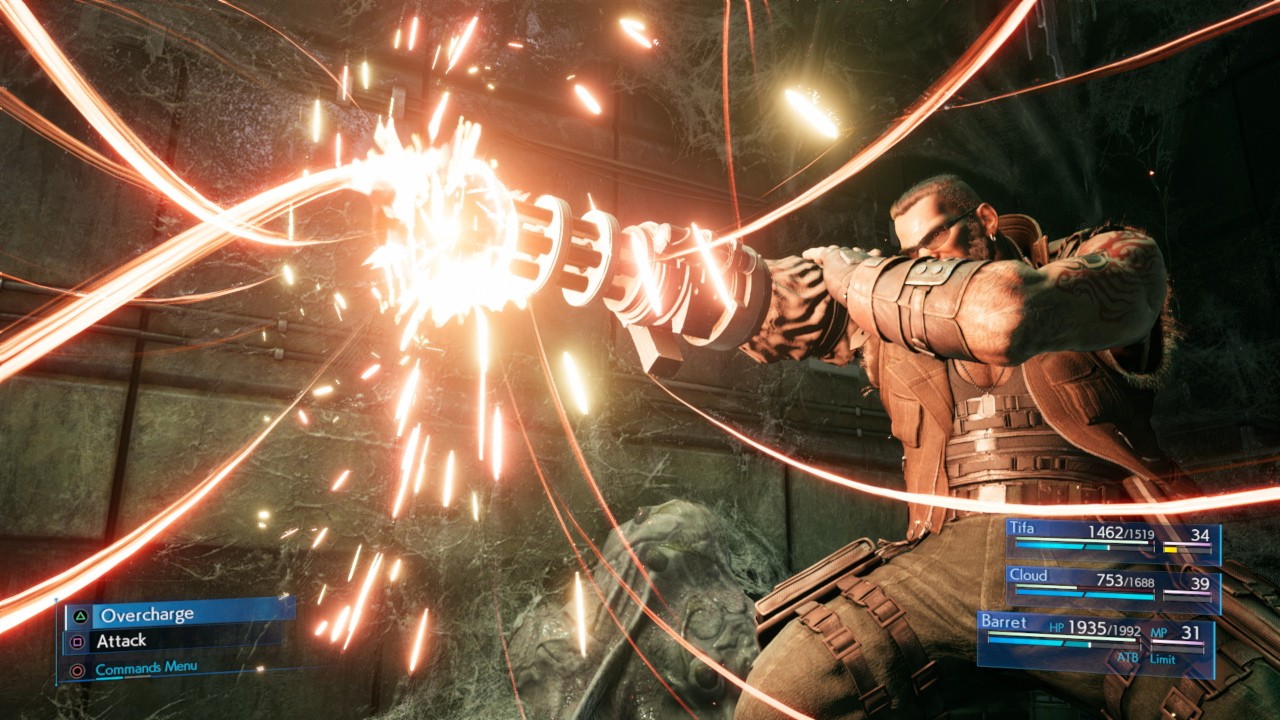 Each character comes with a specific moveset, as well as a special attack (mapped to the triangle button). Barret for instance, has Overcharge which is a strong burst of shots that can quickly fill his ATB gauge; Cloud meanwhile has Punisher Mode which makes his attacks slower but hit harder. Aside from moveset, each character also has certain strengths and weaknesses that must be considered during combat situations. Some enemies fly for example, which Cloud or Tifa will have problems with, meaning you’ll have to switch to Barret or Aerith if they’re in the party.

Mastering different characters’ attacks isn’t the only thing to take note of in battle, you should also keep in mind that proper positioning is key. In other JRPGs, spells/abilities will automatically hit enemies after casting, that’s not the case in FF7 Remake. Most abilities require you to actually get in a proper position. For example, Cloud’s Braver ability will only hit a nearby enemy, so using it when you’re far from your target is a waste. Spells meanwhile, have a cast time which can be interrupted by an enemy’s attack, meaning you can’t just cast willy nilly as a wasted spell wastes both ATB charge and mana points. 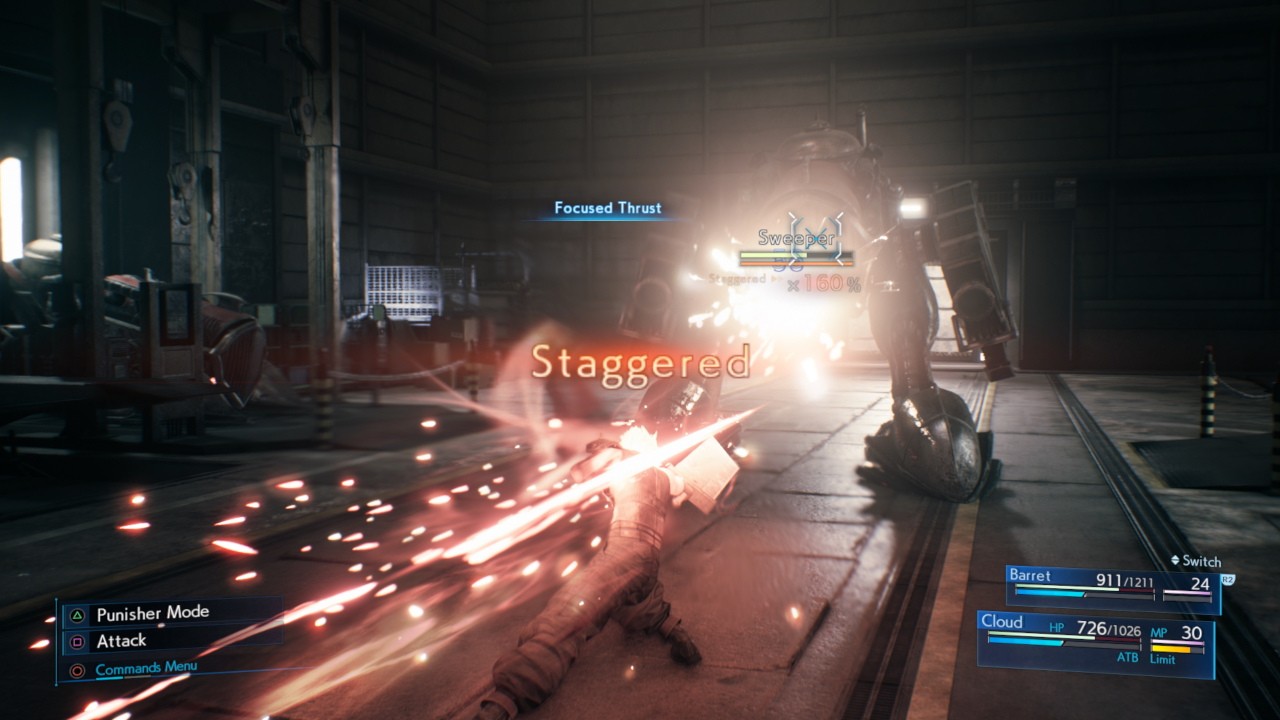 I’ve mentioned multiple times already that exploiting an enemy’s weakness is important in FF7 Remake, but what does it actually do? Aside from damaging enemies more, using spells or that an enemy is weak to or hitting its weak spot fills its Stagger gauge. This gauge is displayed under the opponent’s health bar, and once it’s full, the enemy will become staggered and take 160% damage. Staggering enemies is the goal for a lot of fights given that it’s the time where you can do the most amount of damage. But make sure to move quick when an enemy is staggered, some foes only give you a couple of seconds before they’re back in action.

Knowing what materia to equip, when to switch characters, and how to exploit an enemy’s weakness is key to mastering FF7 Remake’s combat. While I’ve already delved deep into the game’s multitude of systems, there’s still so much I did not dive into. I haven’t even mentioned the weapon progressions system that’s reminiscent of Final Fantasy X’s Sphere Grid system. There are also various attack interactions within and between characters that aren’t even explained by an in-game tutorial, as well as how the game’s powerful Summons can turn the tide of battles. If I were to explore FF7 Remake’s combat mechanics in full, I would probably need a couple of TED talks to do so. 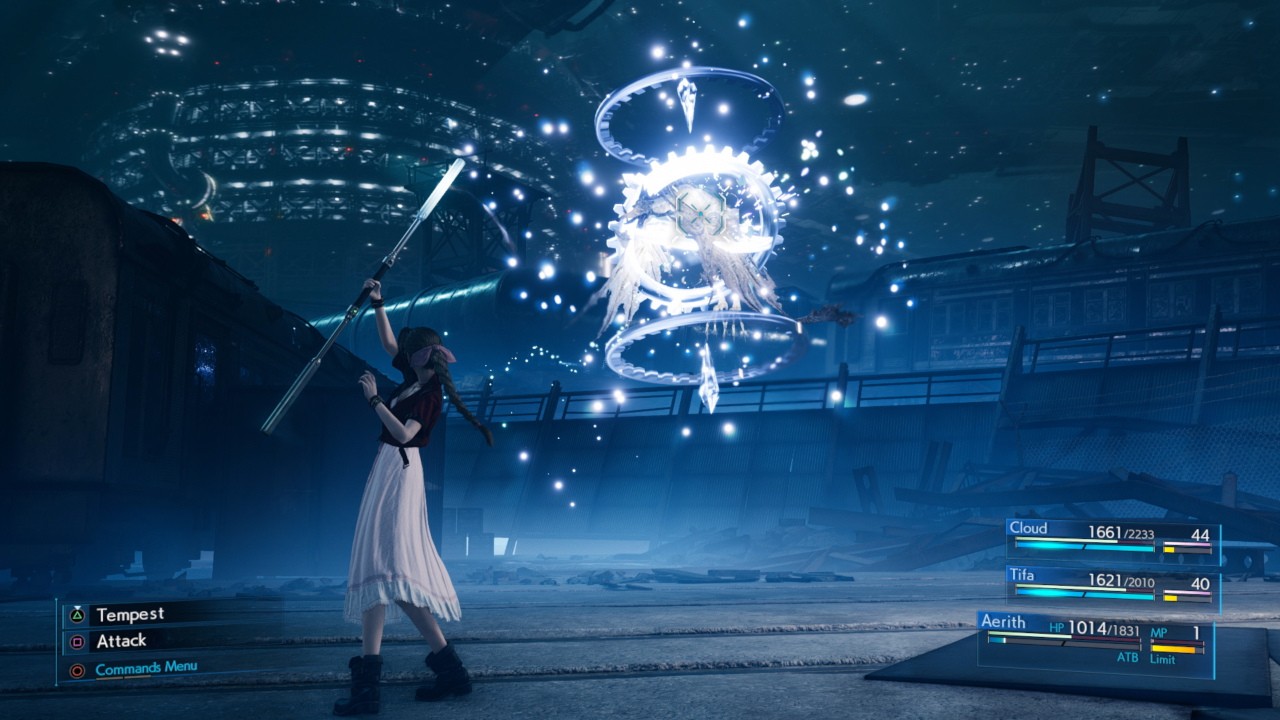 When put into words, the Final Fantasy VII Remake’s combat can seem dauntingly complex, though when you actually play the game, all of these systems come together to create a gameplay experience that can only be rivaled by a select few games. FF7 Remake’s combat is just plain incredible, and it is definitely one of the highlights of this console generation.

- Advertisement -
Previous article‘Genkai Chitai’ is a new work by Junji Ito, and it’s out now on LINE Manga
Next articleNew episodes of One Piece and Digimon Adventure have been delayed due to COVID-19