Predator: Hunting Grounds Review | Don’t Get In The Choppa Just Yet

A lot of fun, but plagued by a lot of issues. 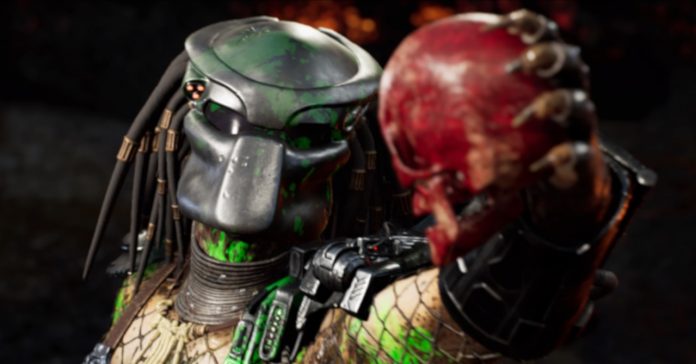 The original Predator movie starring Arnold Schwarzenegger is a classic sci-fi action movie that was popular enough that it spawned its own franchise. And while there have already been several movies and video game adaptations in the franchise, none have captured the greatness (and the sheer MUSCLE) of the original. 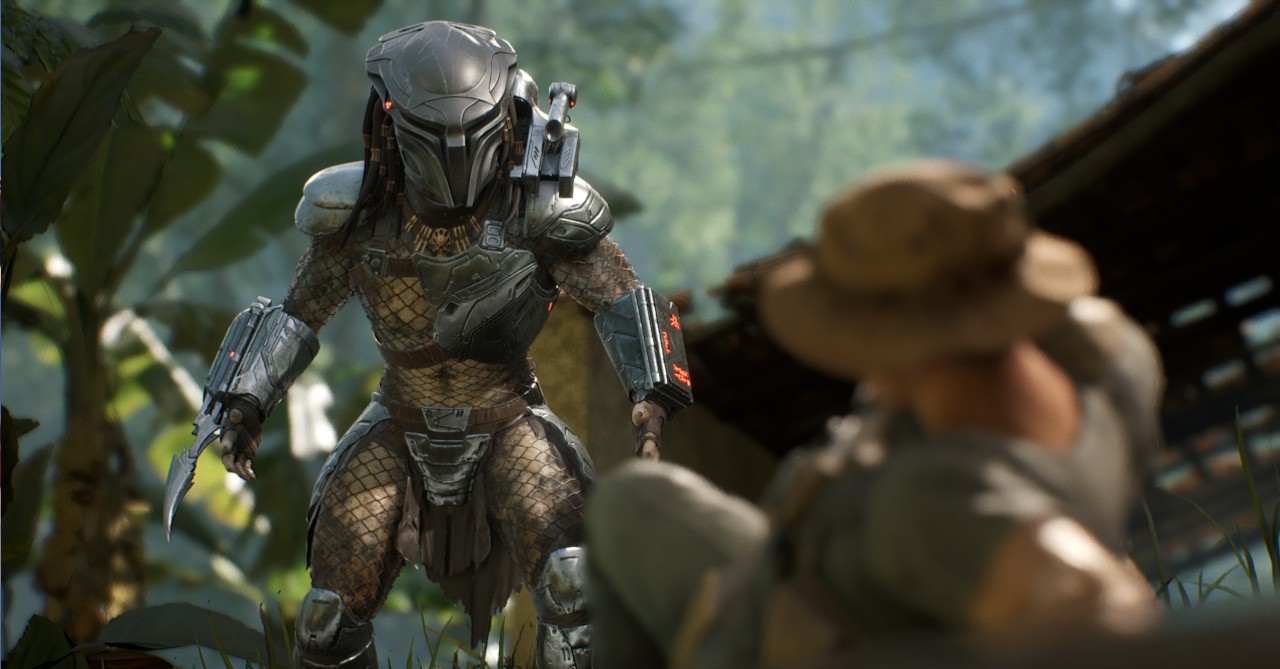 Enter Predator: Hunting Grounds, a new asymmetric multiplayer game, and the first Predator title in a decade (15 years if you don’t count Aliens vs Predator). Hunting Grounds basically takes the concept of the first movie – where an elite fireteam is tasked to complete a clandestine operation but find themselves pitted against a feasome alien foe – and makes a multiplayer game out of it. In theory, Predator fits incredibly well as an asymmetric title in the vein of Dead by Daylight or Evolve, but does the premise work when you play it? It actually does, in spite of a ton of issues that is.

There’s something out there waiting for us, and it ain’t no man

So what happens during every round of Hunting Grounds? Basically, a four-player fireteam (who each play with a first-person perspective) has 15 minutes to complete a set number of objectives and exfiltrate the map via a chopper. These objectives range from taking down a specific enemy or recovering intel from an enemy base. During their mission, the fireteam will face-off against AI-controlled enemies which they must defeat to complete their objectives. While AI enemies don’t put up much of a fight, what makes the fireteam’s mission difficult is the fact that they’re also being hunted down by a player-controlled Predator. 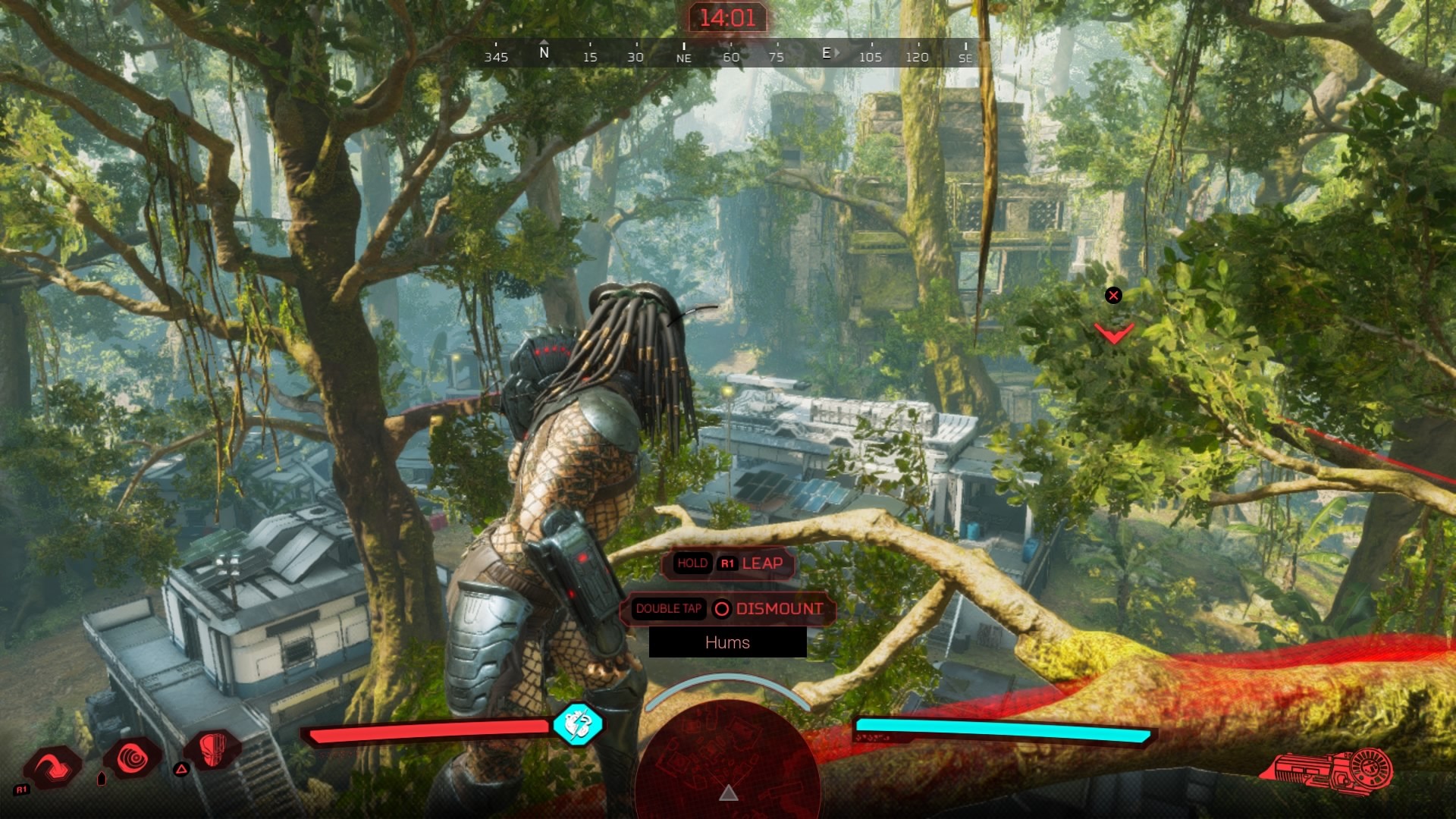 As the Predator (played in third-person), the player’s goal is to hunt and kill every single member of the fireteam before they complete their objectives and escape. Though if even one of the fireteam members make it to the CHOPPA, the fireteam wins.

While taking down a well-equipped fireteam is a tall order, the Predator does have a lot of tools in his arsenal which should be familiar for players who have watched the Predator movies. The Predator can climb up and traverse through trees, use a cloaking device, turn on thermal vision, track down fireteam members, and use powerful weapons such as the long-range plasmacaster or melee-range blades. Once the Predator takes too much damage, he can heal himself via a medkit or by eating wild boars found all over the map. And if all else fails, the Predator can activate a self-destruct device to take down the fireteam along with him after a set amount of time. 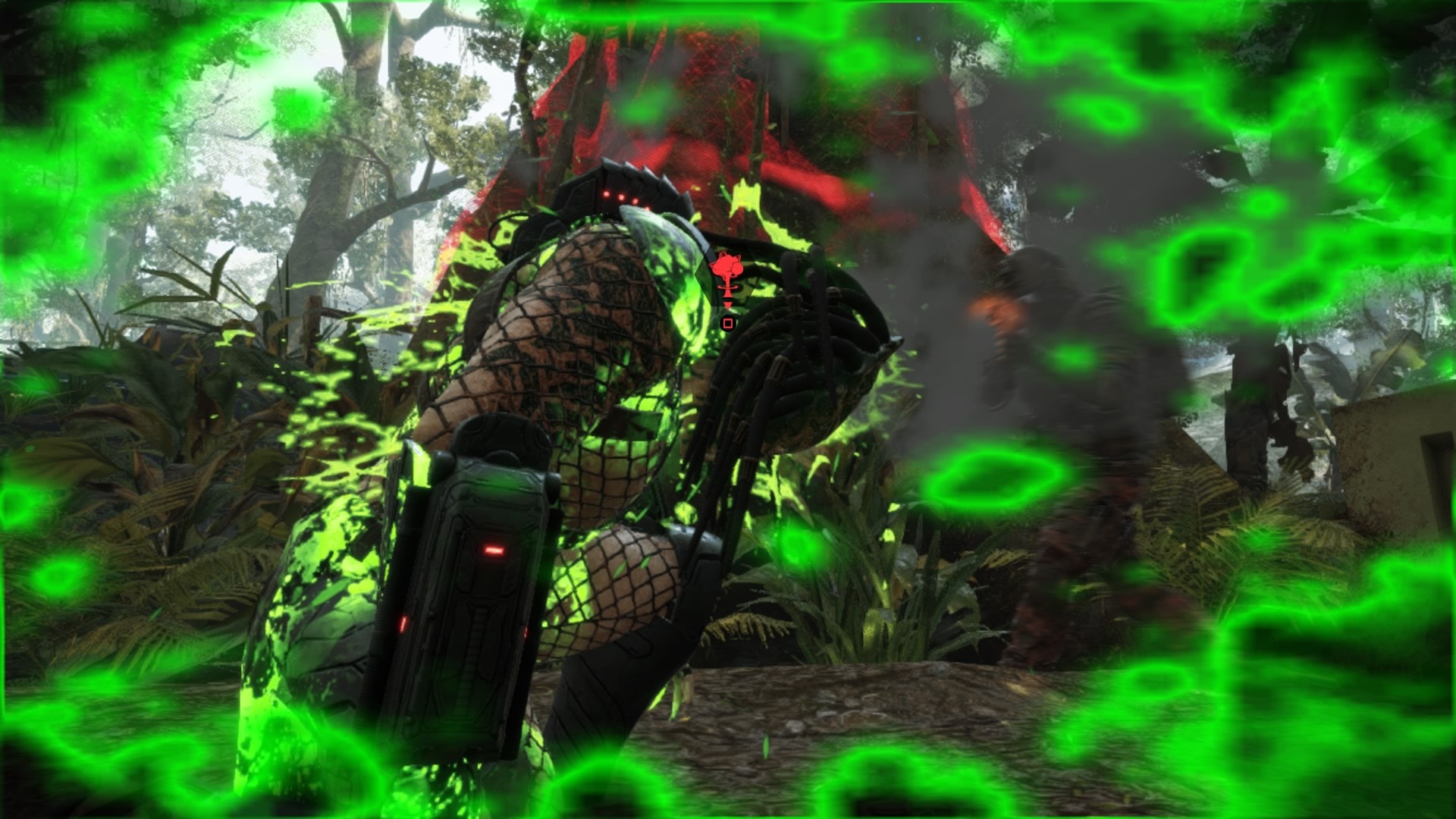 Even with a wide array of weapons at his disposal, the Predator is far from invincible; going straight at the fireteam without any planning will just not work. Instead, the Predator must stealthily stalk his prey and strike only at opportune moments such as when the fireteam gets separated or gets distracted by an enemy assault. Once one member of the fireteam is picked off, the Predator can then become more aggressive in his pursuit of the rest.

There’s nothing quite as satisfying as a successful Predator hunt. In fact, one of my favorite moments in my time with the game is in a match where I played as the Predator. After following a fireteam silently while up the trees, I took advantage of a firefight and managed to kill one of them. Soon after, I tracked the remaining three down to their next objective and managed to take down another. While the remaining two were able to call in the chopper to evacuate, I was able to chase them down and kill them before they managed to escape. 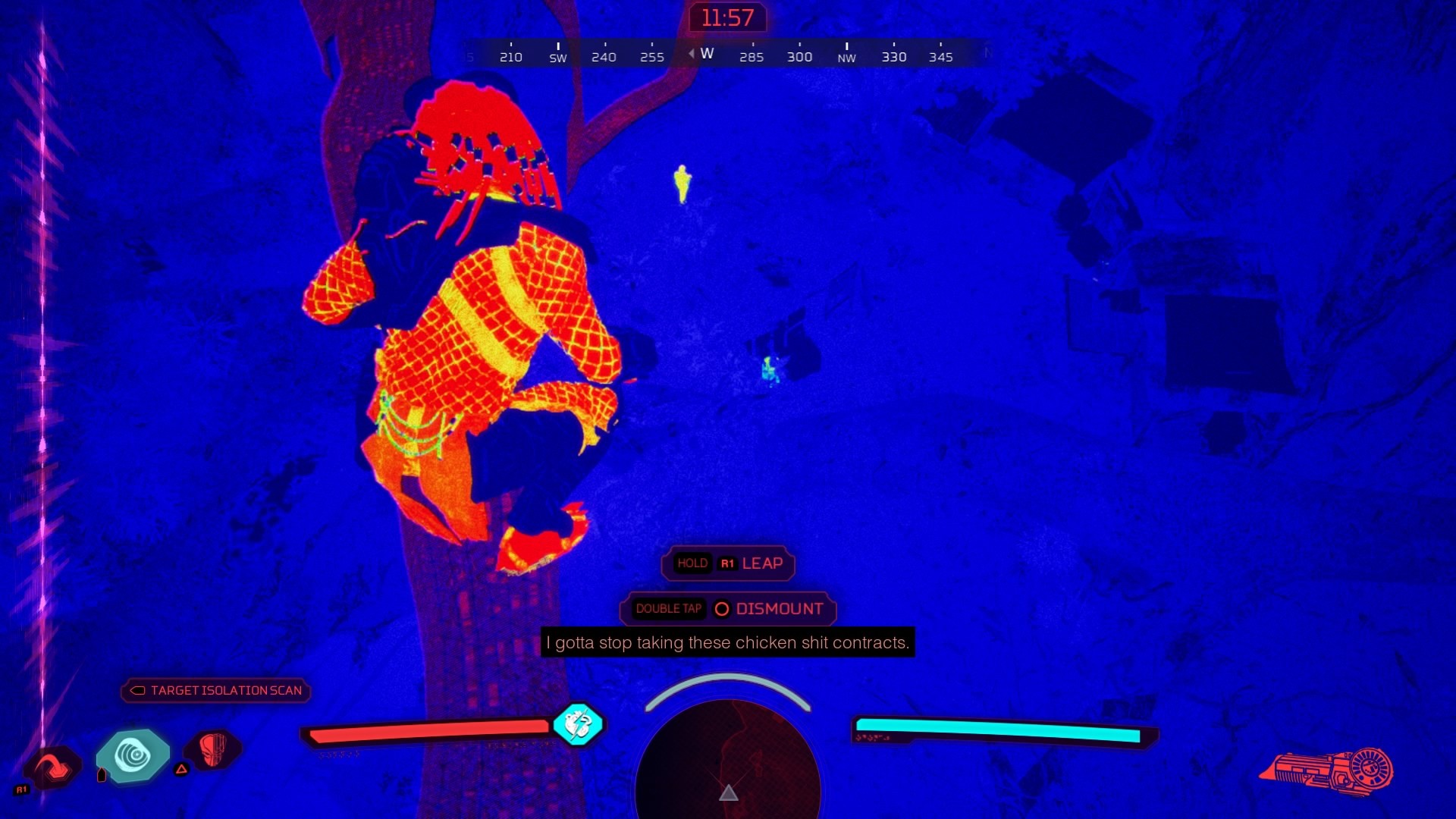 If it bleeds, we can kill it

The fireteam’s main goal is to complete all objectives and exfiltrate the map via chopper. Though that’s not the only way for the team to win. If they manage to take down the Predator, or at least survive its self-destruct phase, the fireteam wins. 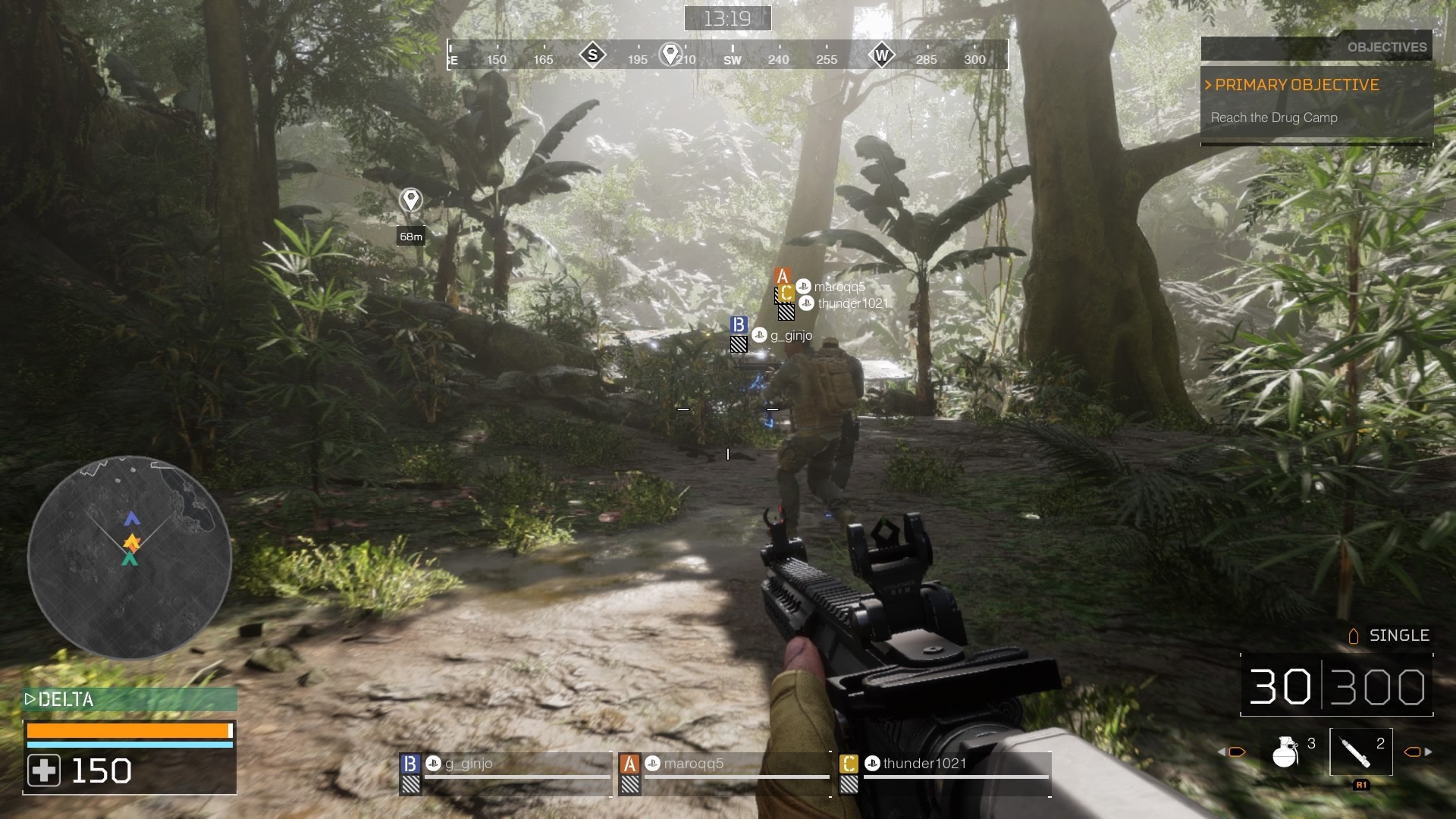 Killing the Predator may seem like a tough task, but it’s actually not that difficult. Even if a fireteam slightly lacks in coordination, as long as the members stick together, they have a strong chance of taking down the alien hunter. In fact, more than half of my games as the Fireteam ended with our squad successfully killing the Predator, or at least surviving its self-destruction.

That’s not to say that the Predator is too weak. It’s just that, for one, playing as the Predator takes some time of getting used to. There’s also the fact that the AI enemies don’t really pose much of a challenge, meaning the fireteam can, at times just ignore other enemies and focus all their firepower on the Predator when he appears. Plus, even if the Predator manages to kill three fireteam members, the surviving player is able to revive everyone once per game by calling in reinforcements at a certain part of the map. 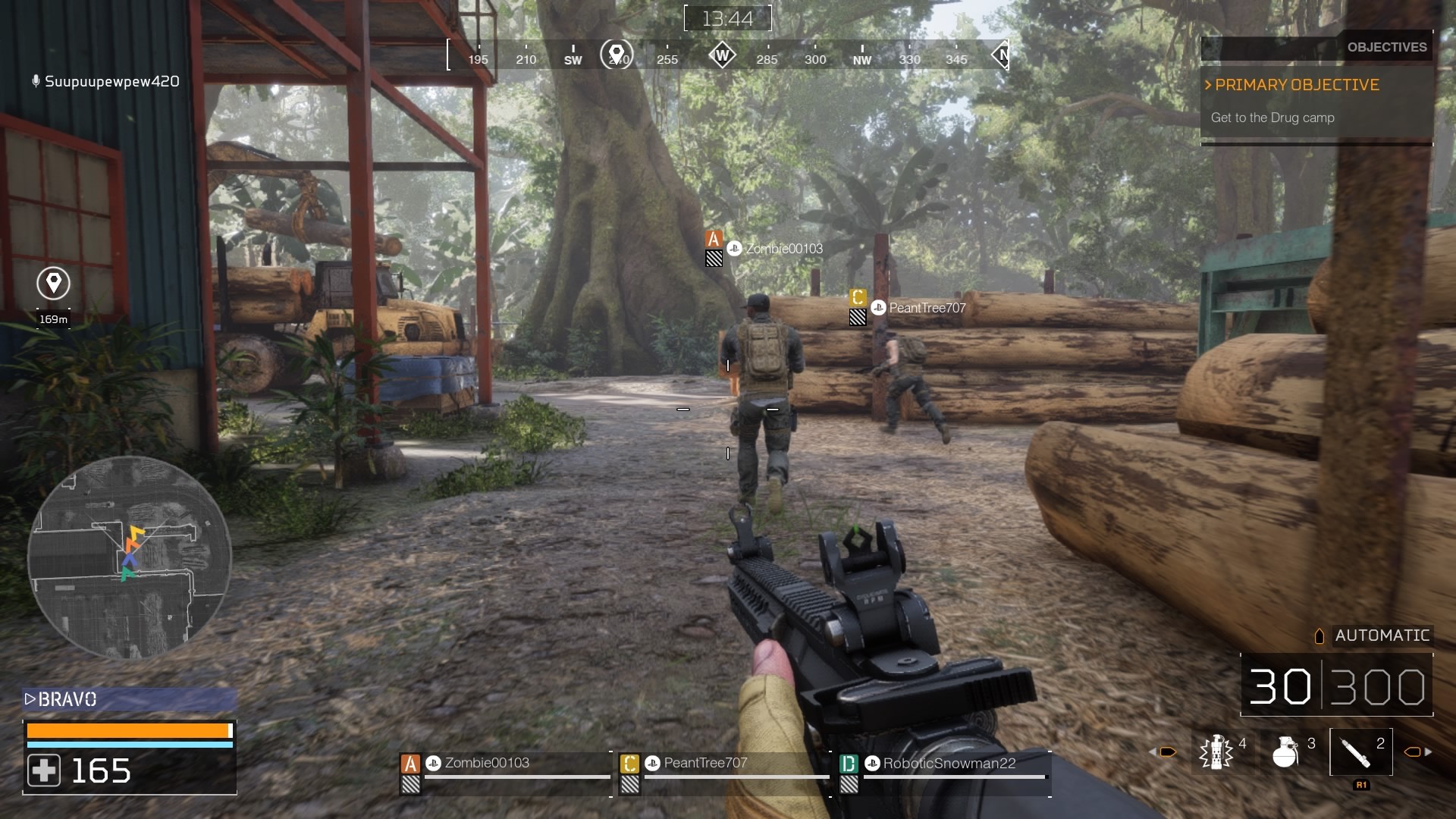 While I feel that the odds are too in favor of the fireteam, I still had tons of fun playing the game. While I have played numerous matches which ended quickly because a Predator was too aggressive, I can distinctly remember other times where our fireteam had to face a Predator who actually knew what he was doing. In matches like these, Hunting Grounds successfully captures the intensity of the original 1987 Predator movie.

Should you stick around?

There’s no doubt that I had a lot of fun playing Predator: Hunting Grounds, but that doesn’t excuse the game’s flaws; and there are a lot of them. For one, the PS4 version of the game suffers from noticeable framerate drops, both as the Predator and as a Fireteam operative (for reference, I played the game on a PS4 Slim). Even at the times when the framerate is steady, the game’s combat and movement can feel clunky, especially when traversing through trees as the Predator. Hunting Grounds’ graphics also isn’t anything to write home about, as it often looks like an early PS4 game. The game essentially needs more polish in a lot of areas. 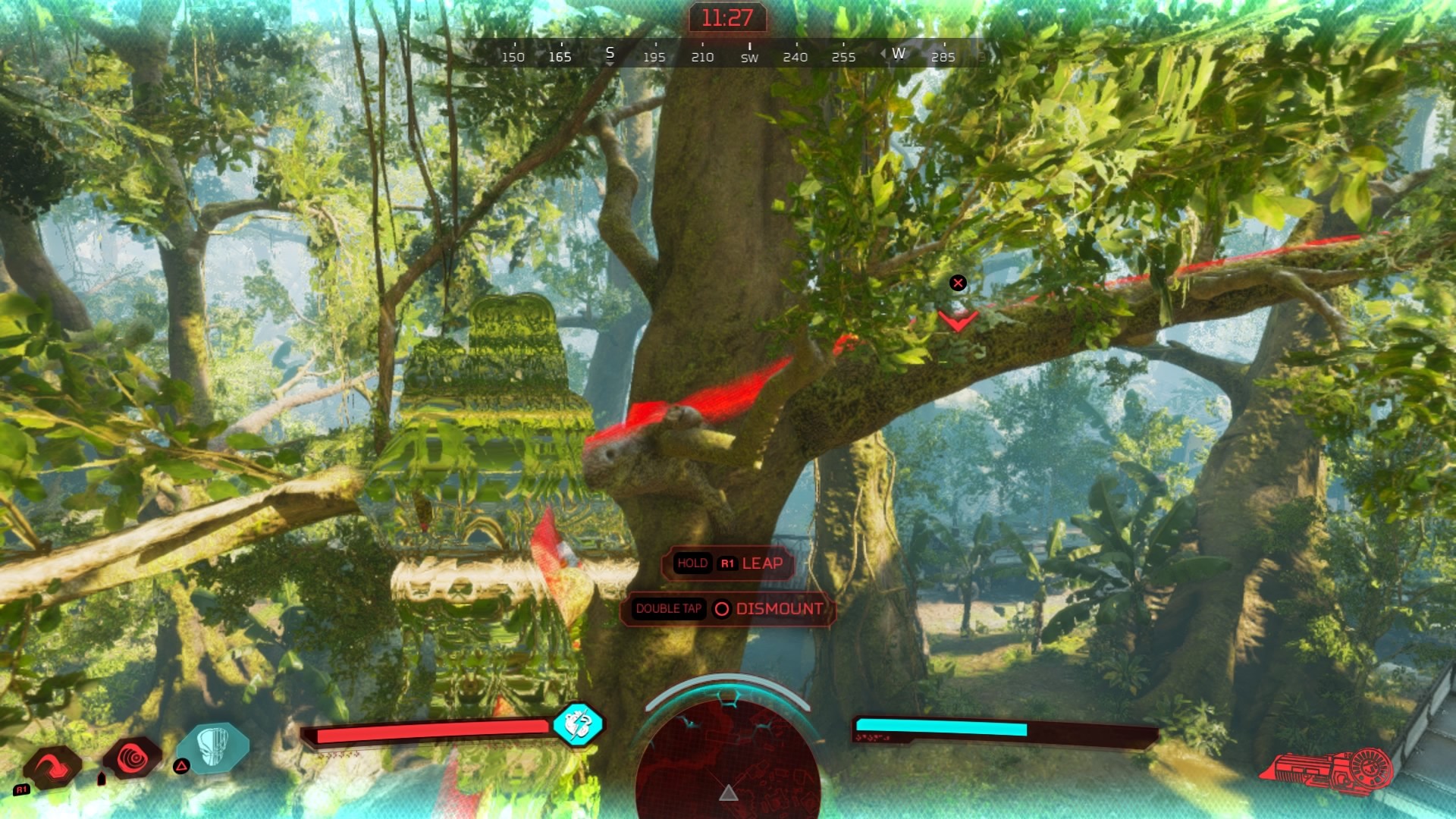 Predator: Hunting Grounds also suffers from a lack of content. As of writing, the game only has one game mode which would’ve been fine if there were a lot of map varieties. Sadly, there are only three maps right now, and all of them look and play similarly. The fireteam’s objectives are also nothing noteworthy and can feel same-y, even if they change from game-to-game. 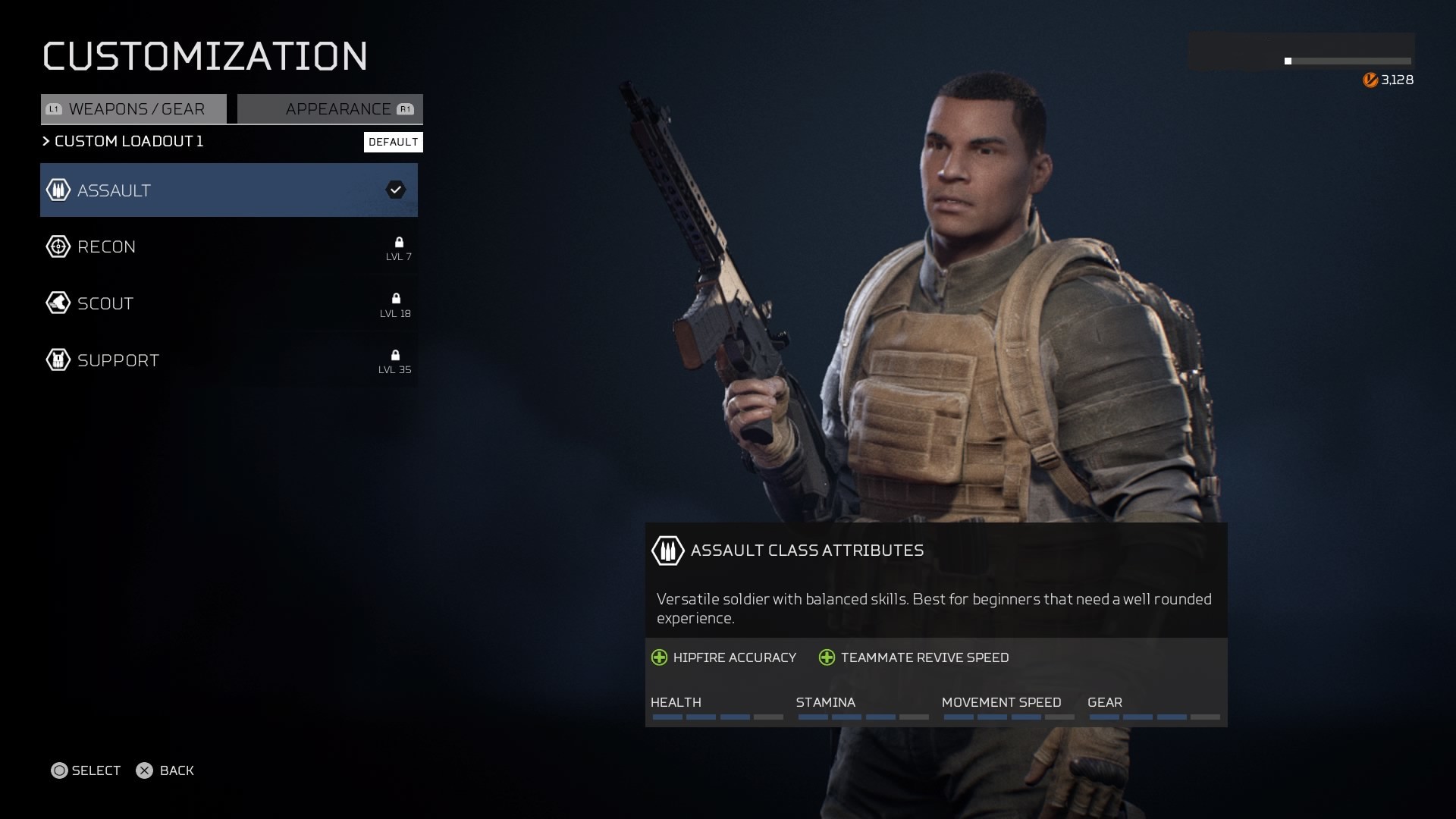 As for the progression system, players unlock new weapons and classes for both the Predator and the Fireteam when they level up. While equipping different weapons and selecting different classes does bring more variety to gameplay, they’re not enough to completely transform how the game is played.

Hunting Grounds also has lootboxes that are given out every time a player levels up. These boxes contain purely cosmetic items, and they cannot be bought for real money. Instead, they can be purchased via credits gained from item duplicates. The fact that the game does not contain microtransactions and/or pay-to-win elements is refreshing, especially when compared to most of the popular multiplayer titles today. 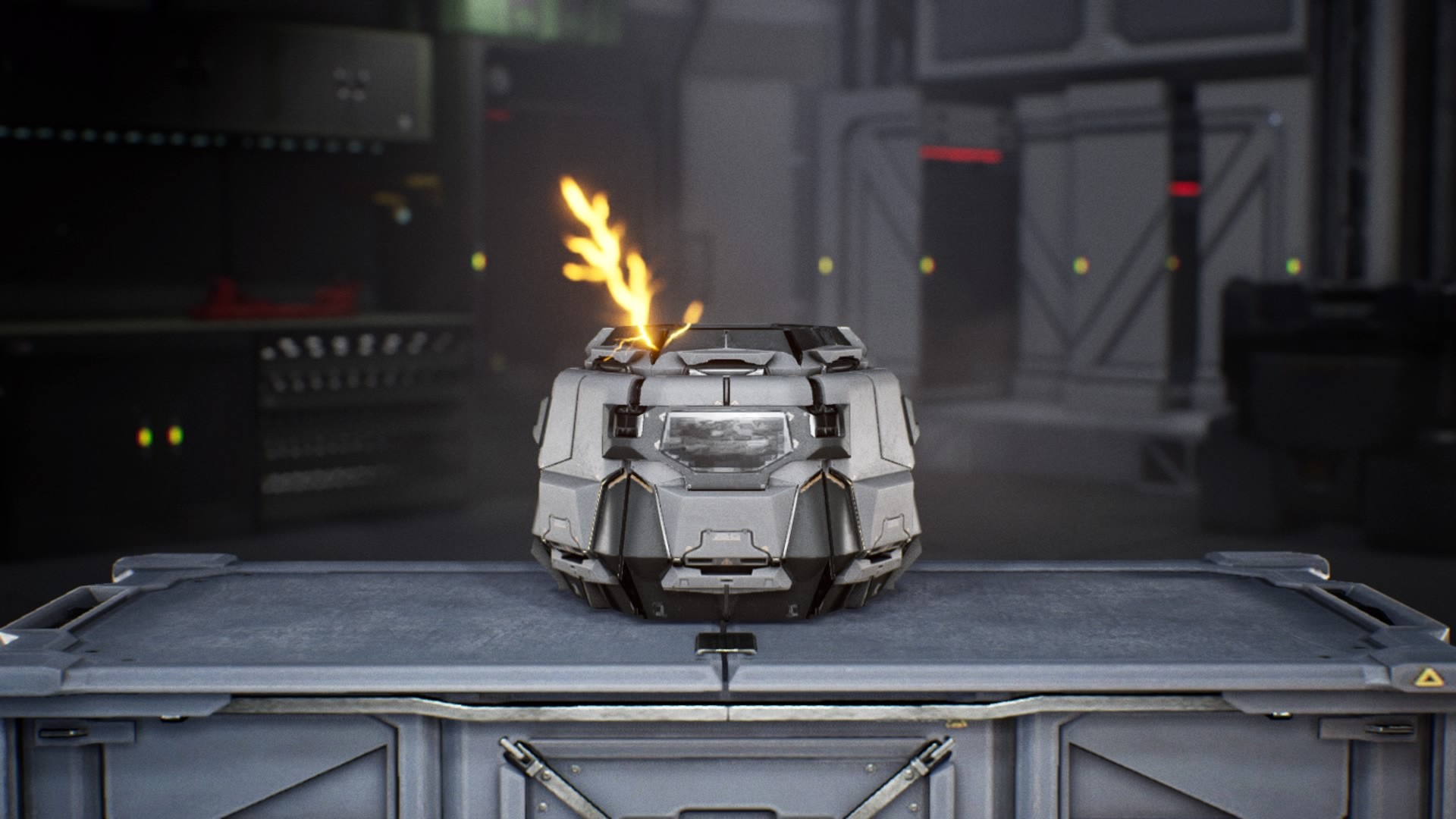 During my time with the game, I also had trouble with its matchmaking system, especially during the first weekend after release. I faced long queue times both for the Fireteam and the Predator; what’s worse is that after a lengthy queue there were times I was placed in lobbies which did not have enough players, meaning I had to find a match all over again. Thankfully, developer IllFonic released an update two days after the game’s release which fixed the matchmaking issues. Hopefully, these issues don’t pop up again soon. 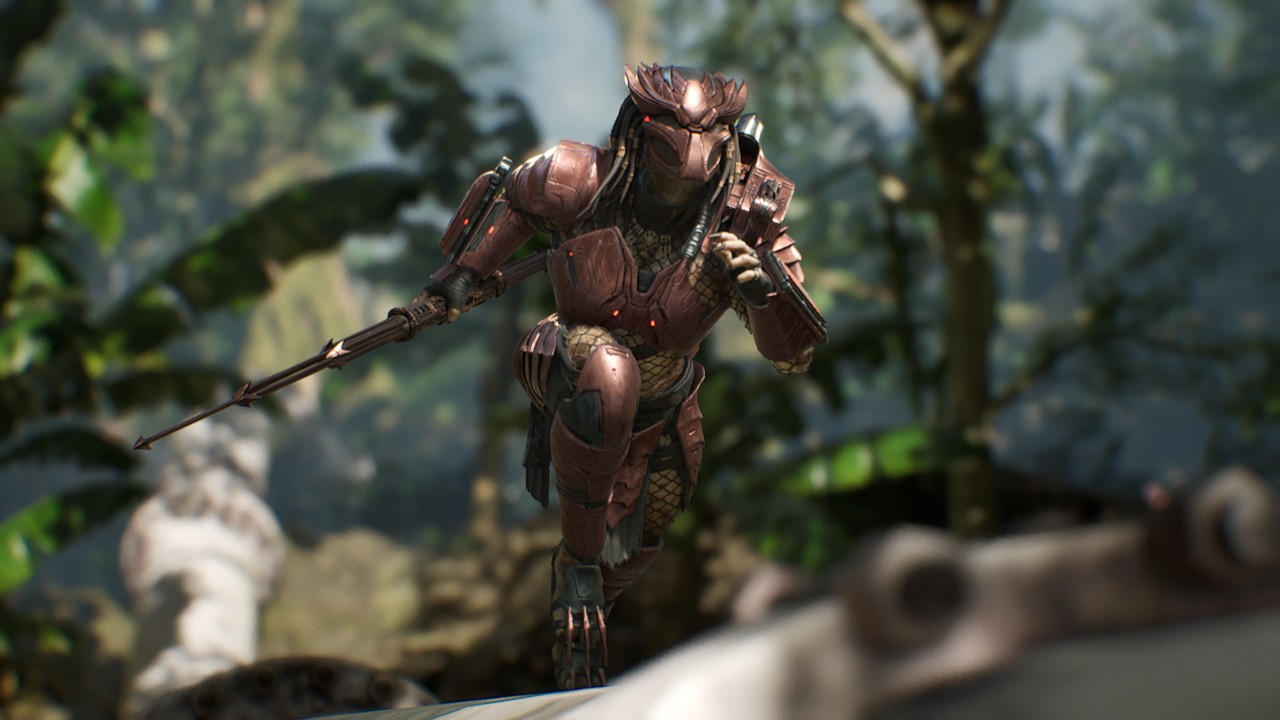 Predator: Hunting Ground is a game that needs a lot more polish. Not only is the gameplay experience clunky, the game also suffers from frequent framerate drops on the PS4. There’s also the fact that Hunting Grounds lacks in content, with the game only having a rotation of three maps that look and play nearly the same. Finally, the game also needs some balancing as the fireteam just has a bit too many options on their hands to make quick work of the Predator.

As it stands right now, I can only recommend Predator: Hunting Grounds to players who are looking for a unique multiplayer title that can look past some technical issues, or to players who are massive fans of the Predator franchise. Though if IllFonic manages to fix the game’s issues and add more content in future updates, Hunting Grounds has potential to be a multiplayer title that’s well worth playing.

This game was reviewed using a PlayStation 4 Slim via a game code sent by Sony Interactive Entertainment Singapore.