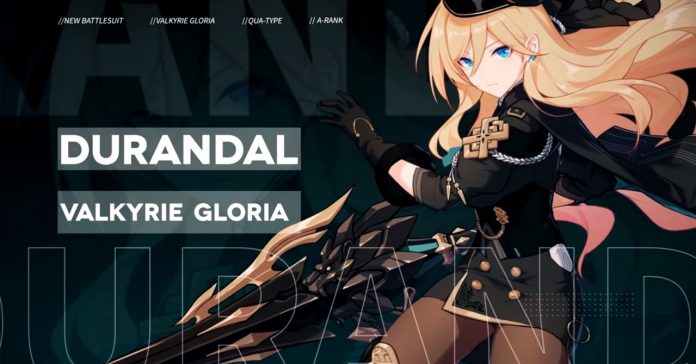 Oh boy, it has been quite a while since I last played Honkai Impact 3rd, so it’s just surprising to see that they added this much content to the game (my phone almost couldn’t handle it). Of course, it’s not just my phone that’s heating, I’m also getting fired up with excitement as well given that miHoYo added a new open world segment in the game. Plus, they finally added Shicksal’s strongest Valkyrie, Durandal and her Valkyrie Gloria battlesuit in the latest update. This makes it the perfect time to return to Hyperion!

Ever since the Fan favorite Rita Rossweisse graced us with her presence (I’m total Fan), Captains all over the world has been asking — “will we ever get Durandal-sama?”. So thank God miHoYo does care about their fans as not only they include the cutie Seele, but now they’ve also included the stunning Bianca/Durandal in the roster of Valkyries. So does the legendary One Punch Woman (or Girl) deliver upon her name as the strongest Valkyrie? Let’s take a look. 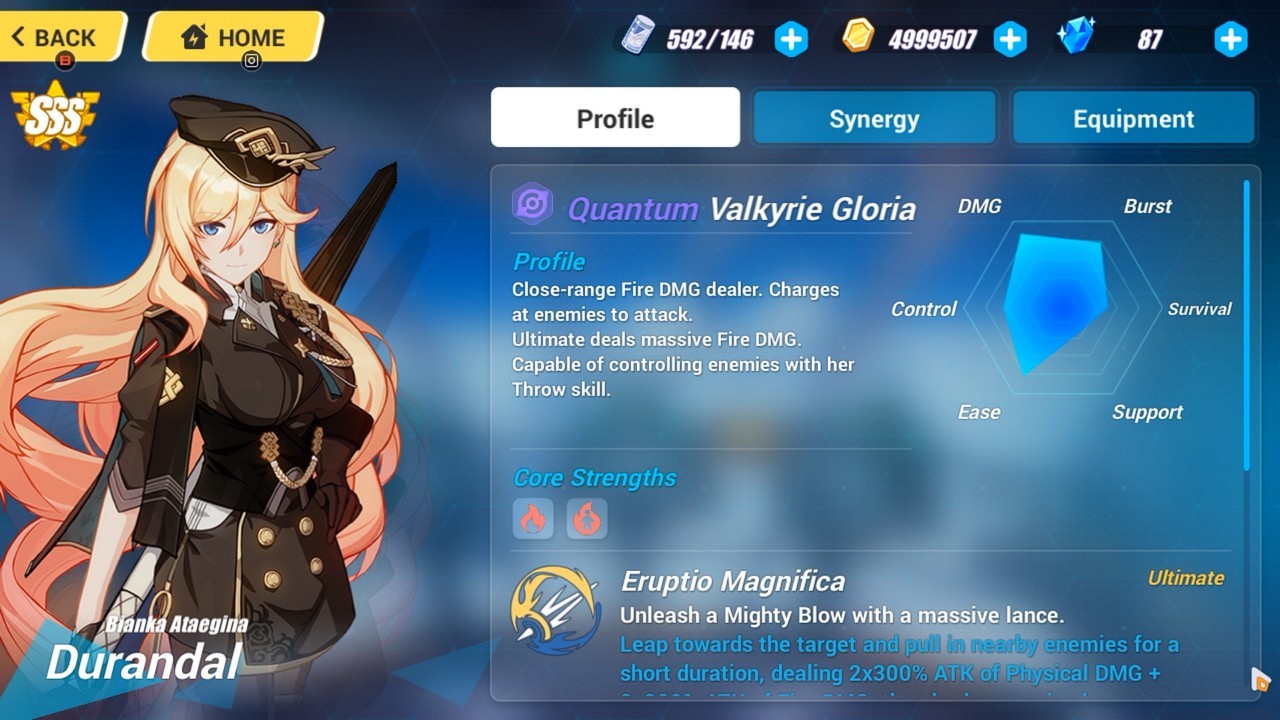 Since not all of us can immediately recruit Durandal to board the Hyperion, we can all fortunately test out her unique kit on her very own demo stage, and it shows how different her A-rank battlesuit Valkyrie Gloria is from the other girls. Using the new Lance Weapon, she can charge through walls of foes that get in her way, and she can deal tons AOE Fire damage when she fills up her resolve bar and spends it on her moveset.

Like the other Valkyries who uses the meter mechanic, Durandal can trigger many bonuses once she fills up or spends her very own resolve meter. This meter can be filled up by either doing basic attacks, doing throw attacks, casting ultimate, or triggering her QTE. With more than one resolve, holding the attack command will enable Durandal to enter the sprint state (Impetus Gloria), gaining the bonus Adamance and Iron Body. During this state, hitting enemies with sprint will consume Resolve, and spending more than one resolve will end the attack with a Decisive blow. 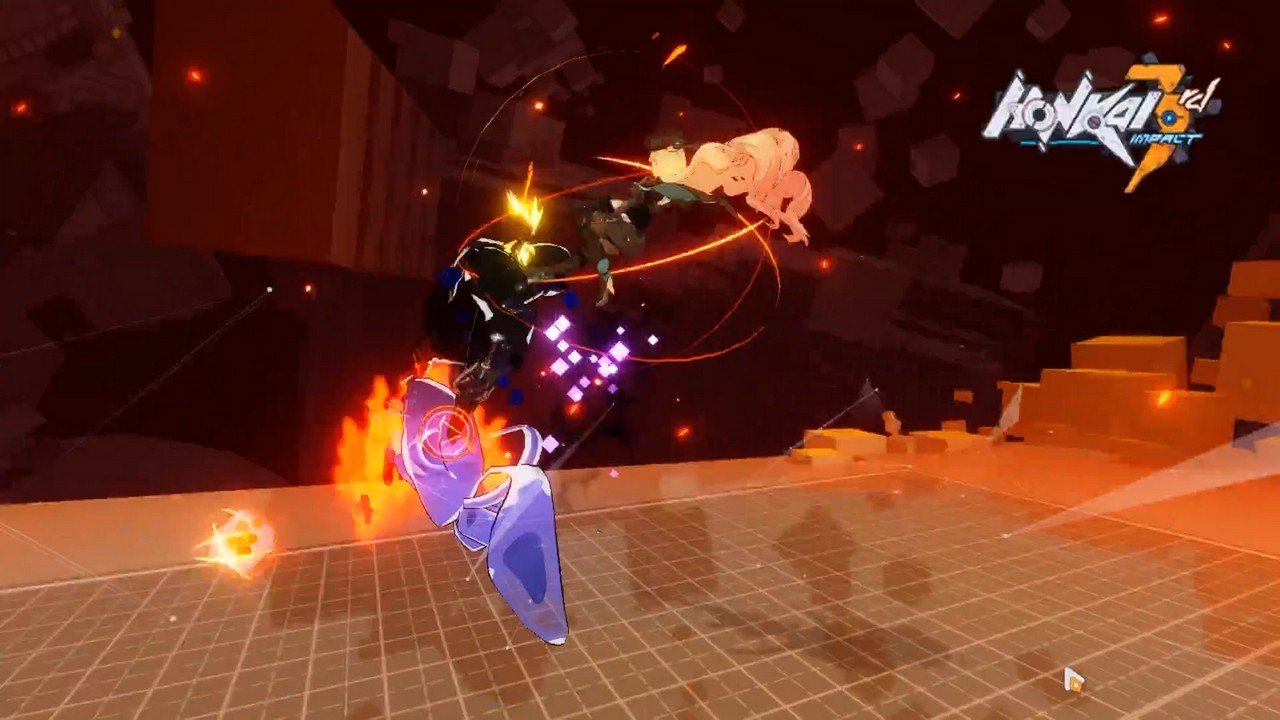 One of the unique moves that they included for Durandal is her throw attack which will make her pin down a enemy; This can be done by hitting the item skill icon. The throw attack will recover her resolve bar and will trigger her time fracture for 2 seconds, but it can only be done to enemies who are not invincible or do not have a Iron body buff. If you manage to react on a certain enemy attack, Durandal will do a variation of her throw attack which won’t trigger a time fracture, but will instead recover a smaller amount of the resolve meter instead. A special icon will flash on the screen when this can be executed.

Like I mentioned above, her basic attacks can restore resolve, but only the second attack and beyond will fill the resolve meter; and if it hits, it also deals fire damage on each attack.

Her basic combo, the Hasta Domina, is a five sequence attack that also fills the resolve meter. Completing the combo will apply ignite to enemies hit. Upon consuming her resolve meter, Valkyrie Gloria will grant her a stack of Fiery Will (10 stacks max) that will boost her fire damage by 6% and reduce incoming damage taken by 5% for 20 seconds. Continuously consuming resolve will refresh Fiery Will (for testing). Perfectly evading the enemy attacks will trigger Valkyrie Gloria’s skill Augur Martialis by tapping the attack after each perfect evasion. This will trigger a time fracture for 3 seconds, restores her resolve meter, and she’ll skewer the enemies using the 5th sequence of her Hasta Domina. 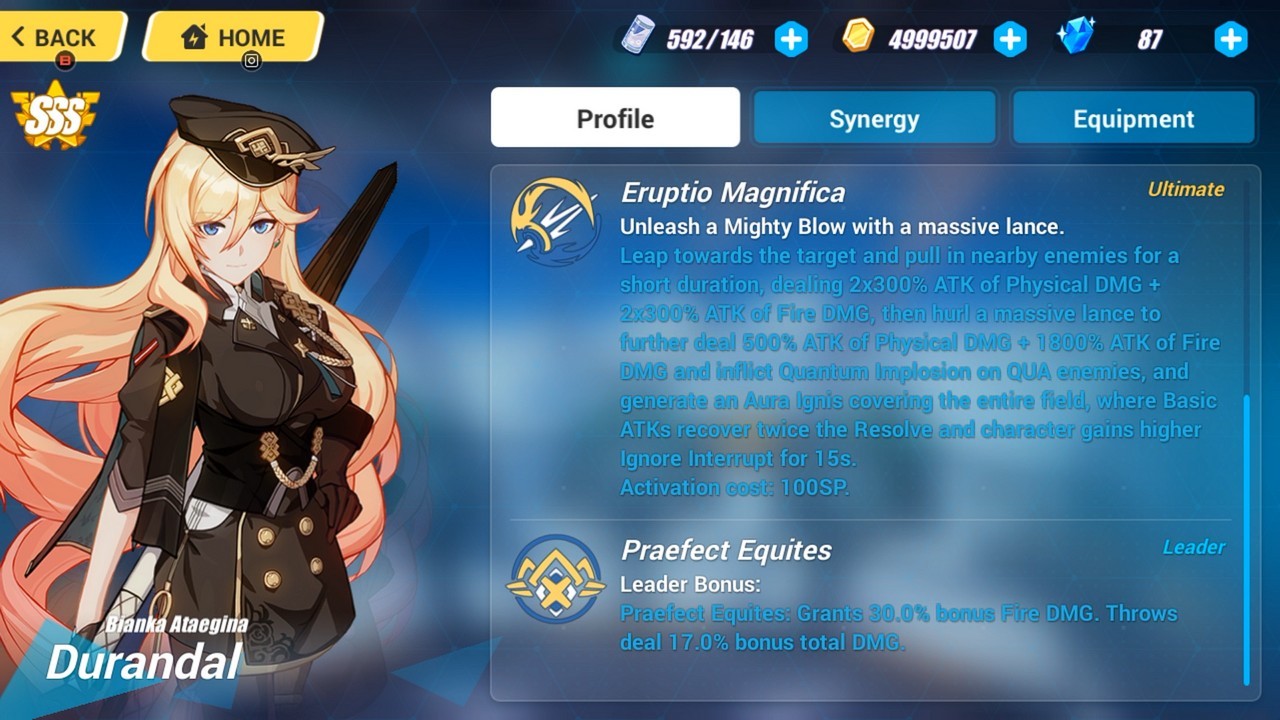 Her Ultimate Eruptio Magnifica will pull nearby enemies in an area, dealing heavy fire damage as well as additional physical and fire damage in the explosion area. This also grants the Aura Ignis buff that doubles the resolve generated by normal attack, all while becoming impervious to enemy attacks for 15 seconds.

Durandal’s Valkyrie Gloria moveset is already quite complicated, but that’s actually just the tip of the iceberg. This makes me think that I should better stick with Kiana’s White Comet battlesuit.

At the very least, players  can consult her in-game profile to find out which build suits her although. In my opinion she can work well with a set of stigmata that enhance her fire damage like the Ancient Willpower Set and Solar Prominence Set; these can be useful for beginners who does not have the recommended stigmata set. 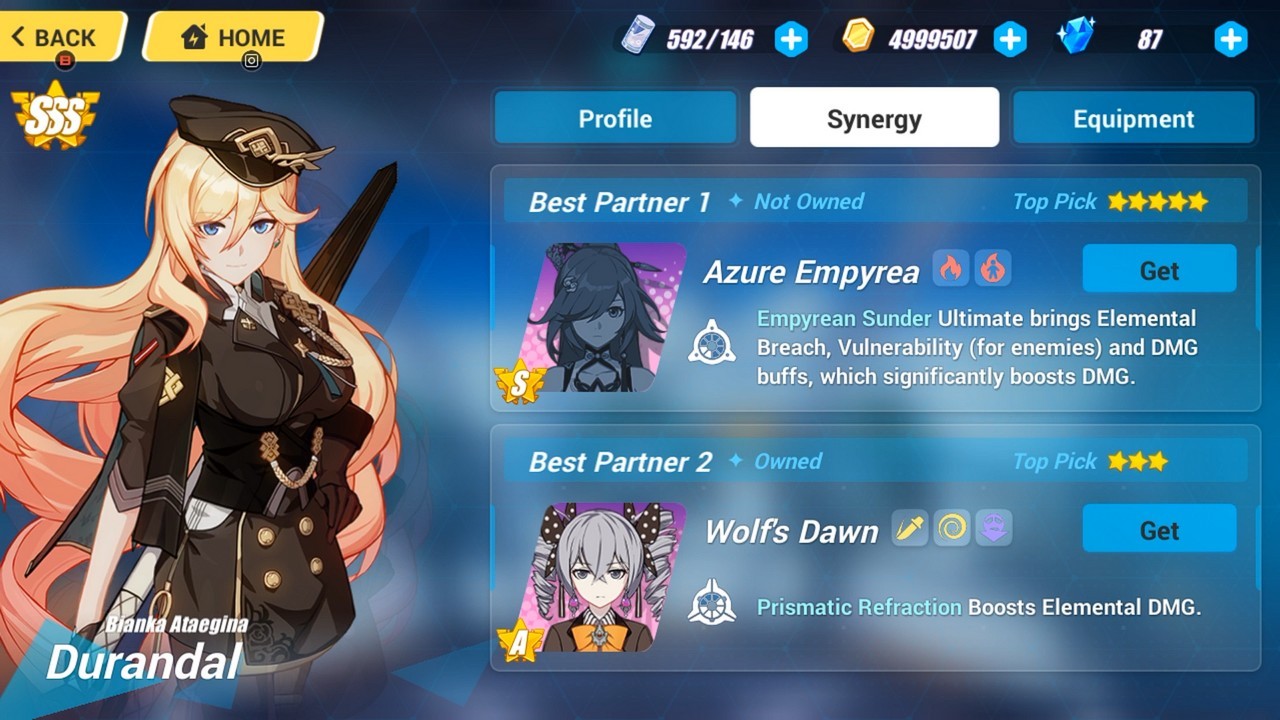 The best Valkyries to accompany Valkyrie Gloria in battle are Fu Hua’s Azure Empyrea and Bronya’s Wolf Dawn. Azure Empyrea Ultimate will provide an additional 50.0% ATK of Fire damage, which synergizes well with Durandal’s kit. Meanwhile, Wolf’s Dawn passive not only provides protection from elemental damage, but also buffs the whole team’s elemental damage by 30% enhancing Valkyrie Gloria’s fire damage further. Although her sprint and throw attacks can push away enemies a bit too far, you can consider Valkyrie Chariot as a companion as she can use her ultimate to gather all enemies in a single area so Valkyrie Gloria can unleash her own moves on them. 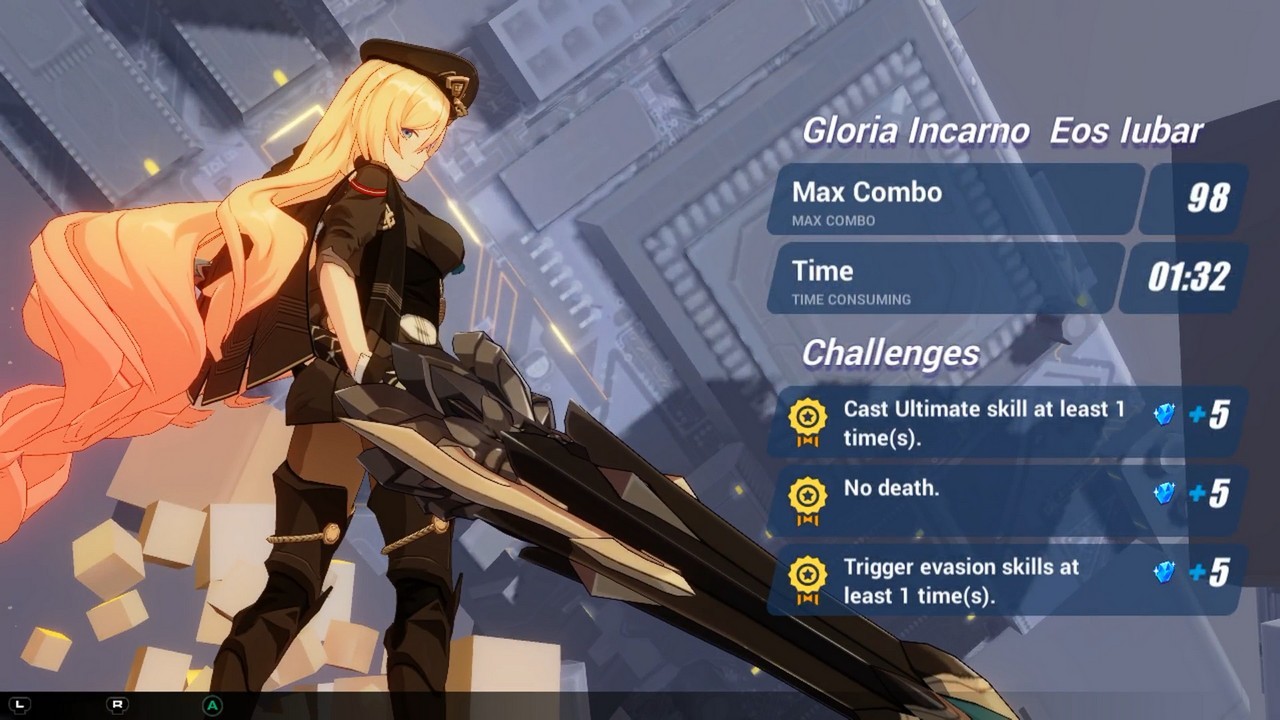 Valkyrie Gloria strongest characteristic is on how can she maul down mobs thanks to her sprint and ultimate abilities while dealing fire damage. She also takes advantage of the fact that she does not take any additional damage from any type of enemies, making her an ideal vanguard for most stages. Durandal’s weapon is still unique in the game, so you can only relay on lady luck to get her signature weapon, or you can work your way to chapter 15 to get Lucia as a starting weapon.

The bottom-line is, Valkyrie Gloria is worth it for Abyss stages as she can take down mobs of enemies, especially when accompanied by proper support Valkyries. So if you love getting on the top of Abyss, investing on Valkyrie Gloria can be worth it.