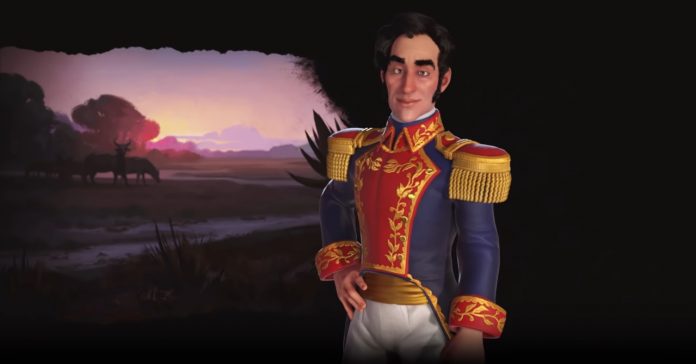 Following the introduction of Lady Six Sky, 2K and Firaxis gives us another first look at a new leader in Civilization VI — Simón Bolívar of Gran Colombia. Bolívar is the second new leader in the recently launched Maya & Gran Colombia DLC pack.

The leader of the Gran Colombia is described by 2K and Firaxis as:

“Simón Bolívar’s units are a nimble force to be reckoned with, whether on offense or defense. With clever use of his many Comandante Generals, his army becomes nigh unstoppable.

Additional movement for military units makes long marches across the plains or hills a breeze for Gran Colombia, whether patrolling their own lands or liberating hostile lands. Field promotions do not end a unit’s turn, letting them get right back into the fray. With the addition of Comandante Generals, which join with each new era, Simón Bolívar’s army is further bolstered with additional combat strength and movement. The Llaneros are best near these Comandante Generals and other Llaneros, and serve as a powerful backbone for a mid-game military force. The Hacienda will provide sustenance and production to continue the war path. Simón Bolívar is best leading Gran Colombia towards a Domination Victory, though such might can divert resources to other paths as well.”

The Maya and Gran Colombia Pack for Civilization VI is available now on Xbox One, PS4, Nintendo Switch, Windows PC, Mac and Linux. The DLC is priced at PHP 449 on Steam.

The Maya and Gran Colombia Pack is also available as part of the New Frontier Pass, priced at PHP 1,499 on Steam. Buying a Civ 6 Season Pass will give you access to six DLC packs, the remaining five of which will be released in a bi-monthly basis. Read more about the New Frontier pass here: