A Final Fantasy 7 Remake ‘Tifa Theme’ for the PS4 is now available for free!

Get it now on the PSN SG or HK store! 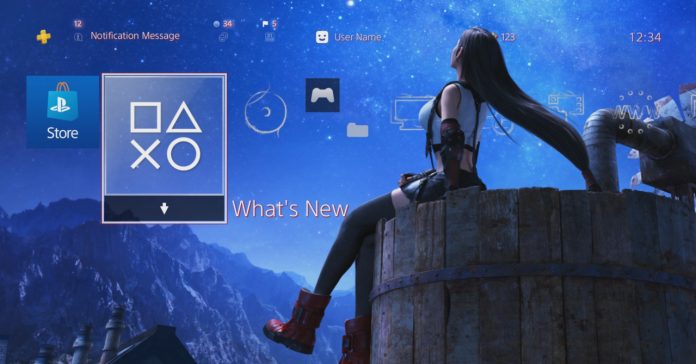 Great news, Final Fantasy fans! Square Enix has just released Tifa’s Theme for the PS4. No, I’m not referring to the incredible Tifa’s Theme from the soundtrack, I’m talking about a PS4 theme featuring Tifa Lockhart. Best part is, the theme is available now for free!

If you’re wondering if you need to have a copy of the Final Fantasy VII Remake before getting the theme, don’t worry, the new Tifa Themes is available for everyone. And no, you don’t need a PlayStation Plus subscription either. Though you do need a PSN account in Asia to get the theme for free.

The PS4 Tifa Theme features an incredible artwork of Tifa in the Nibelheim water tower, the place where Cloud made his promise to protect Tifa. Aside from featuring an absolutely gorgeous artwork, the theme also plays Tifa’s iconic music; specifically the rendition of Tifa’s Theme made just for the FF7 Remake.

This new FF7R PS4 theme isn’t exactly new. The theme was part of a promotion in the US where players were able to redeem the Tifa PS4 Theme by buying two bars of Baby Ruth, Butterfinger, or Crunch and registering the receipts online. While the Tifa Theme is available now for free in Asia, PSN US account holders can still only get it via the aforementioned promotion.

Download the theme now at the PSN SG and HK stores:

- Advertisement -
Previous article
The 10th Dota 2 International has been delayed due to COVID-19
Next article
The OPPO Find X2 Pro supports HDR on YouTube, Netflix, and Amazon Prime Video