These new B550 motherboards make PCIe 4.0 available to all! 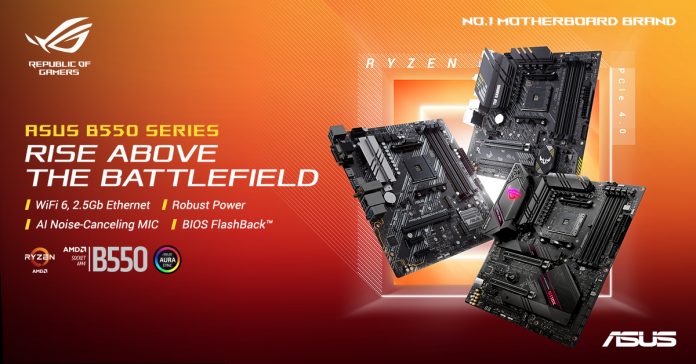 ASUS recently announced new motherboards featuring the latest AMD B550 chipset that bring the potential of PCI Express® 4.0 to mainstream builds everywhere. AMD B550 motherboards enable 20 general-purpose PCIe® 4.0 lanes from 3rd Gen AMD Ryzen™ desktop processors. The primary PCIe slot on all new ASUS B550 boards offers 16 lanes of PCIe 4.0 connectivity, and 3rd Gen AMD Ryzen™ parts feature as many as four USB 3.2 Gen 2 ports running at up to 10 Gbps direct from the CPU itself.

ASUS also has exciting features to enhance its B550 motherboards like WiFi 6, 2.5 Gbps Ethernet, robust power delivery, increased DRAM speed and BIOS Flashback™. The B550 chip itself gets an upgrade to PCIe 3.0 for its built-in lanes. These upgrades make B550 a tantalizing platform for mainstream builders throughout the world.

ASUS engineers and designers have produced a grand total of 11 B550 motherboards across three families: ROG Strix, TUF Gaming, and the Prime series. 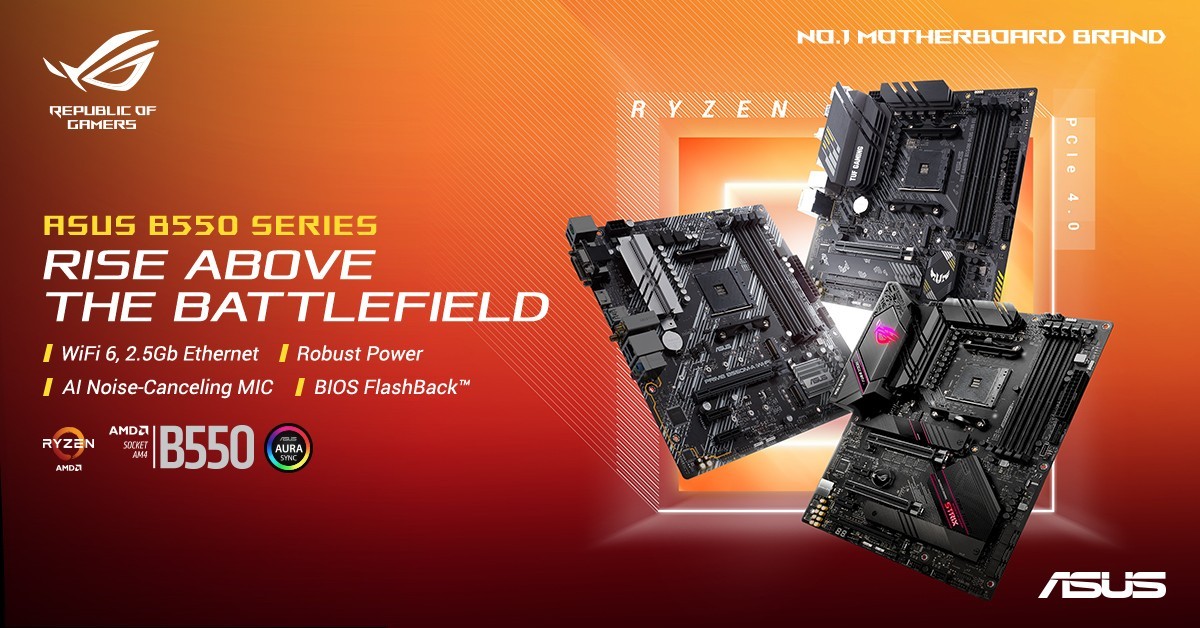 ASUS built ROG Strix B550-E Gaming with an eye towards AMD’s high-performance processors and dual or triple expansion card setups. The AM4 socket is flanked by a 14+2 power stage VRM for reliable performance under sustained loads from many-core CPUs, while reinforced PCIe x16 SafeSlots support multi-GPU action in two-way SLI™ or three-way CrossFireX™ setups for gamers and creators alike.

ROG Strix B550-F Gaming (Wi-Fi) proves the point for builders who want a performance-oriented board with a healthy dose of luxury. The 12+2 power stage VRM is ready for top Ryzen chips, and 8+4-pin ProCool auxiliary power connectors with solid pins ensure steady and stable power delivery to those power stages.

ROG Strix B550-I Gaming is designed for small builds with big ambitions. By design, Mini-ITX makes room for a single PCIe 4.0 x16 slot, but the compact form factor has other advantages. Strix B550-I Gaming can drive compatible DIMMs at speeds up to 5100 MHz and beyond by taking advantage of the shorter trace length between the memory slots and the CPU. The 8+2 power stage VRM is a fine fit for 3rd gen Ryzen chips. Active cooling on the VRM and an eight-pin connector with our ProCool II design ensures that power delivery remains stable in the tight confines of Mini-ITX enclosures.

ASUS TUF Gaming B550M-Plus (Wi-Fi) takes many of the features of TUF Gaming B550-Plus and reconfigures them for the smaller microATX footprint. This board keeps the same pairs of PCIe x16 and M.2 slots as its ATX sibling. The main difference is that one of the M.2 slots takes in standard 80 mm devices instead of longer 110 mm units. In exchange, this model offers a more attractive price tag to go with its trimmed dimensions.

The top-of-the-line ASUS Prime B550-Plus motherboard is ready to power a mid-range gaming rig or serve as a solid foundation for an AMD-powered productivity system. This model is right at home powering midrange Ryzen chips, and it comes fitted with heatsinks atop the VRM and chipset to ensure stability.

Space in offices and bedrooms is often at a premium, making ASUS Prime B550M-A (Wi-Fi) a better option to go into places where an ATX build might not. This variation on Prime B550-Plus offers nearly the same specs but uses the compact microATX form factor.

A compact microATX form factor lets builders save on space without sacrificing expandability, and both the main PCIe x16 slot and M.2 slot are wired directly to the processor with latest-gen PCIe 4.0 connectivity for maximum bandwidth with next-gen devices.

The ASUS B550 motherboards will be available in the Philippines by the end of June 2020.