Get to the top of the ranking ladder with these combos. 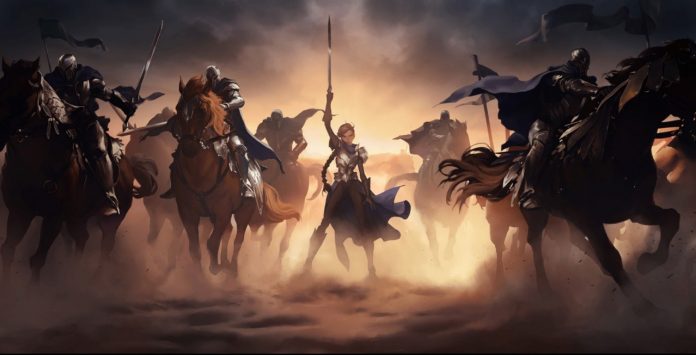 Legends of Runeterra was just released recently, and players have already cooked up many ways to win. With tons of combination available, there are just so many cards which synergize well with each other. Some may look complicated, while some may seem a bit cheap; regardless these are the things that make CCGs more interesting.

So if you’re looking to build a good deck for the ladder, here are some of the best card combinations that we can think of that are currently available on LoR:

Fiora is a quite unique unit as her stats are pretty decent, she’s easy to summon, and she has a Challenger ability, meaning she can choose which unit will block her when she attacks. But what makes her even better is that if she can kill 4 units and survive, you automatically win the game. Since Fiora’s ability involve her in many duels, sending her in the field with protection spells can guarantee your victory. So cards that grants barriers or buffs her stats works very well; good thing Fiora is a Demacian and the Demacia region has access to tons of low cost protection spell cards. Though if you really want to turn Fiora into a absolute unit, you can use Unyielding Spirit, granting her invulnerability for the rest of the game although you still have to watch out for recall or stun.

You can also achieve Fiora’s win condition fairly easily with her own abilities alone ,provided that she can survive long enough to make it. But if you pair her with the spell card Judgement, you may be able to guarantee your win in just one turn. Judgment allows you to strike all battling enemy units, and since all enemies she kills are all counted for her effect to work, you can do this combo even if you Fiora is level 1. Just keep in mind that she has to survive and kill the unit for the win condition to happen. 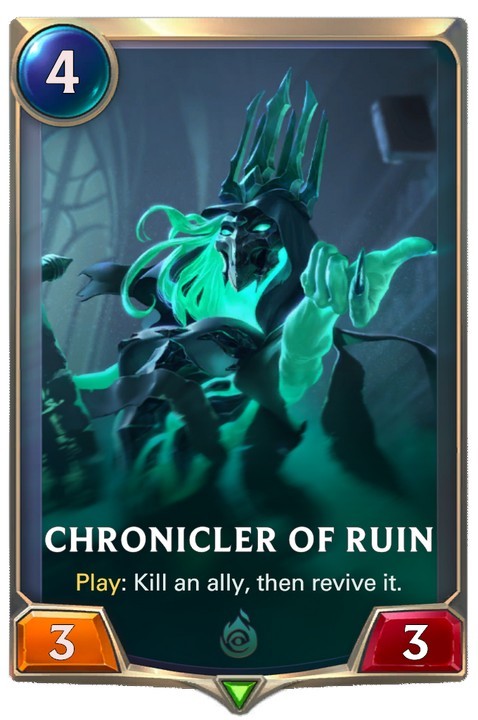 A bit costly to pull-off but satisfying, especially when you can swarm the field with just the help of two cards and two subsequent turns. Chronicle of Ruin is a very flexible card that destroys one of your units when summoned, so it works very well with cards that trigger their effects when they are destroyed like cards with afterlife. What’s even better is that Chronicle of Ruin also summons the very same card back to the field, leading to more synergy.

For instance, if you introduce a Wraithcaller things can get crazy. When a Wraithcaller is summoned in the field, she will summon another unit called the Mistwraith that has a fearsome ability which grants any subsequent Mistwraiths a +1/+0 everywhere, so by now you know where this is heading to.

All you have to do is summon a Wraithcaller, and in the next turn (or if you have enough mana) summon a copy of Chronicle of Ruin, targeting your Wraithcaller. This destroys the Wraithcaller but triggers its own effect, summoning another Mistwraith that buffs other Mistwraiths. This give you four units in the field, with two Mistwraiths that have a 4/2. If you have another Chronicle of Ruin in your hand, you can repeat the same thing and add another +1/0 to all Mistwraiths. You can also do something similar with Cursed Keeper to summon an Unleashed Abomination with 4/4 stats and cheaper mana cost, but it has no other perks. 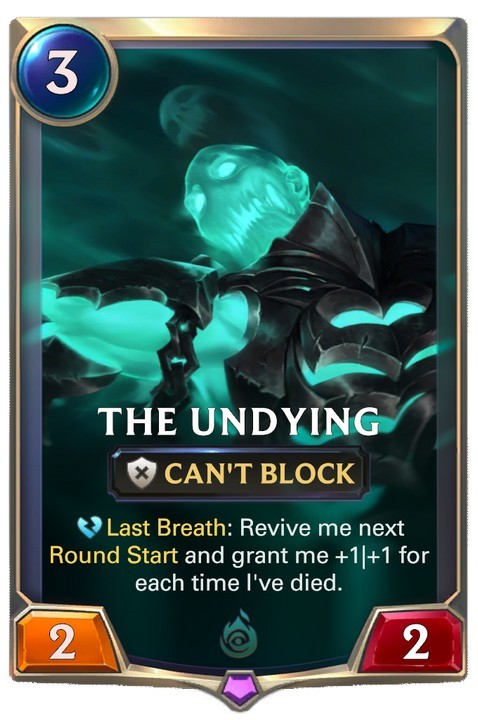 One bonus thing about the Chronicle of Ruin is it does not really summon the same card back to the field, instead it destroys your target and creates a new copy of the same card. So if you use it to destroy the unit called The Undying, you’ll end up with a new copy of The Undying; and since the original copy is destroyed, it will return at the end of turn with bigger stats. Just imagine all the possible things you can do with Chronicle of Ruin with the right cards!

A simple way to gain advantage is to pair Champions like Zed or Hecarim as they actually synergize well with cards that buff themselves when a new unit shows up. Cards like Greenglade Duo is a good choice to attack with these Champions so that when Zed’s shadow or Hecarim’s Spectral Riders show up in the field during the attacking phase, Greenglade Duo will gain a +1/0 for each new unit summoned during that turn. Plus, Greenglade Duo is an Elusive unit so it can attack your opponent directly. This can surprise the opponent and chip away a good amount of HP. A similar combo can also be done with Sparring Student as it costs 1 less mana to summon and it gains +1/+1 instead, but unlike Greenglade Duo, it’s not elusive.

This end-game setup involves Ephemeral units and a certain unit card. If you are running a Shadow Isle and Freljord deck and have Ephemeral units included in the card pool, chances are you also have Hecarim and Shark Chariot as with these two, you’re guaranteed to have 3 free additional units to attack every turn. Shark Chariot’s effect lets you summon it back in the field when when you attack with another Ephemeral unit, making it a staple for any deck that runs Ephemeral units.

This card works well with Hecarim as when he attacks he summons 2 additional ephemeral Spectral Riders. Shark Chariot also works great with the Freljord unit card They Who Endure. Before you summon this unit, it will gain +1/+1 boost whenever a ally unit dies, so whenever you attack with a Hecarim and Shark Chariot, it will gain +3/+3 every attacking phase.

The best part about this unit is any ally unit that dies during the game are counted, even if you are not holding They Who Endure in your hand; plus it has Overwhelm so not only do you have a towering unit in the field, but also your opponent will take damage regardless if they block. Last thing about Shark Chariot is that it also works well with Chronicle of Ruin, as it will make another copy of Shark Chariot.

This one is a staple for those who run a stun control deck (and I consider it as one of the best combos in LoR). Minotaur Reckoner will stun the current weakest enemy unit in the field and once paired with Yasuo, he will strike the stunned unit. This is another way to level up Yasuo without the help of other spell cards. This can leave your opponent crippled every turn once these two cards is in the field. The downside is that Minotaur Reckoner costs a lot of mana to summon, but once these two are present, the pay off is just massive.

One of the strongest buffs in LoR is the barrier buff that people enjoy (or tick you off if you’re the one playing against it). While the majority of barrier spells have low mana costs, a unit that provides a barrier every turn is much better. And the best unit that has this ability is Shen as every time he attacks with an ally, he will provide that unit with barrier. The unit that can take a huge advantage of this buff is the Greenglade Caretaker, as every time an ally unit gets a barrier, she gets +2/0.

Lastly, this synergy involves two Champion units. To do this you need Karma and Heimerdinger on the field. What makes them synergize well is that a level 1 Karma will always provide a random spell every time a round ends that can be cast to trigger Heimerdinger’s effect which provide the players a free fleeting Unit to summon with 0 cost.

Yep, you read that right, 0 mana cost! Just make sure to summon the unit that same turn or it will disappear once the turn ends. Not only do you get a random spell which can hurt an enemy, you’ll also have a free unit to summon during the same turn. Once Karma reaches level 2, whatever spells you cast will multicast itself that will trigger Heimerdinger’s effect twice, giving you an even bigger advantage.

There you have it! Some of the best combinations that are currently available in Legends of Runeterra. Of course, there are still a ton of other good and OP comps in the game, so let us know if you have a great combo in mind!

- Advertisement -
Previous articleMeet Hamako Mori, a 90-year old “Gamer Grandma” from Japan
Next articleCyberpunk 2077 Standard and Collector’s Editions are now available for pre-order in the Philippines