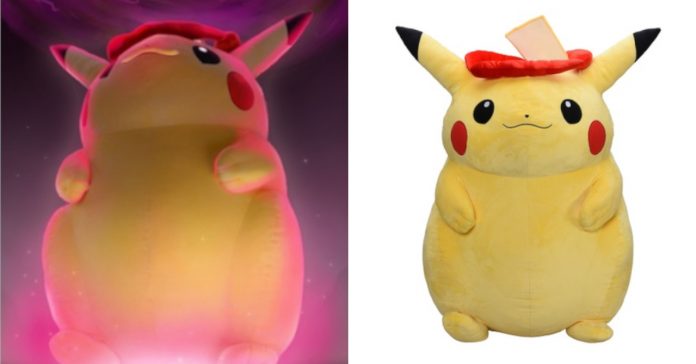 As the mascot of the Pokemon franchise, Pikachu no doubt has the most amount of merchandise of any Pokemon, especially plushies. Even with all the Pikachu merch available right now, there’s nothing quite like this!

While it may not seem that big in photos, make no mistake, this is a big plush toy. In fact, it has a height of 80 centimeters (2 feet and 7.5 inches) with a weight of 4.5 kilograms (around 10 pounds).

Given its size, it’s no surprise that this plushie is quite expensive. The Gigantamax Pikachu plush toy is priced at JPY 44,000 (around PHP 20,580)!

Aside from Pikachu, there’s also a plush version of Meowth’s Gigantamax. This Meowth plushie is even taller than the Pikachu one at 165 centimeters (5 feet, 5 inches)! Though it’s not as heavy, with a weight of 3.29 kilograms (7.24 pounds).

Want a Gigantamax Pikachu or Meowth plushie of your own? Both plush toys are now up for pre-order at the Pokemon Center Online store, and they’ll release in Japan on October 2020.

- Advertisement -
Previous articleScarlet Nexus is a new RPG from Bandai Namco, and it’s releasing for both current and next-gen consoles
Next articleUbisoft to hold an “E3-style” digital showcase called Ubisoft Forward this July