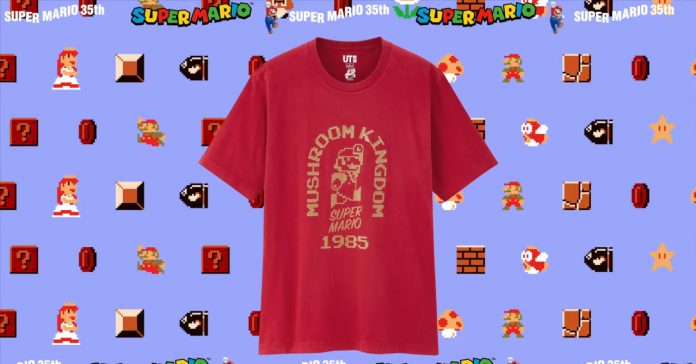 Uniqlo has once again teamed up with Nintendo for a new UT collection, and no, I’m not talking about the upcoming Pokemon x Daniel Arsham collaboration. The new Nintendo collab from Uniqlo is a ‘Super Mario 35th Anniversary’ UT graphic tee collection!

Can you believe it? It’s been 35 years since the release of the original Super Mario Bros. for the NES/Famicom, and now the Super Mario series is still as popular as ever. Because this Uniqlo UT lineup was created to celebrate the game’s 35th Anniversary, the t-shirts in the collab feature creative designs featuring iconic imagery from the Mario game that started it all (on console at least).

The upcoming UT collection features 6 mens t-shirts and 5 kids tees. Check out the designs of the mens lineup here:

As someone who likes wearing white tees, I’m definitely loving the three white t-shirts of the collab. Though if I had to pick, I’d go with the third t-shirt — the one which shows the progression of the Super Mario series, just because it features Super Mario Galaxy! Aside from the white tees, I’m also liking the black t-shirt because of how subtle and low-key of the bunch.

Meanwhile, here are the designs for the kids collection:

The Uniqlo UT Super Mario 35th Anniversary collection is already available in select countries globally. There’s no word yet on whether the new Mario UT collection will be released in the Philippines. If it does release, expect them to be available only after the community quarantine lifts.