Mr. Driller DrillLand is now available on the Switch and PC

Get this cute action-puzzle game now on the Switch and on PC via Steam. 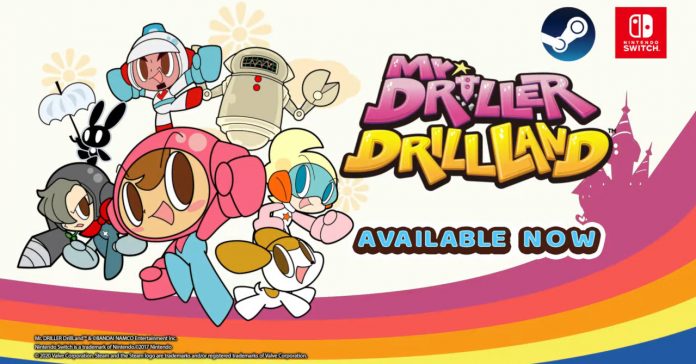 Did you play Mr. Driller back in the original PlayStation? What about its sequel on the Game Boy Advance? If you did, here’s some good news for you! Bandai Namco has just announced that Mr. Driller DrillLand is now available on the Nintendo Switch and on PC via Steam.

Mr. Driller DrillLand is an update of the original Mr. Driller, andit features updates to graphics and gameplay, as well as HD cutscenes. In case you’re unfamiliar with the gameplay, Mr. Driller DrillLand tasks players with “drilling” to the bottom of the screen by destroying colorful blocks in the field. To drill deeper, players must create combos of colorful chain reactions, as well as avoid enemies along the way.

Bandai Namco describes the game as:

“Mr. DRILLER returns in Mr. DRILLER DrillLand to invite players to a secret amusement park known as “Drill Land,” located 500 meters underground. Players can explore and conquer the five attractions in Drill Land, each with their own set of unique gameplay rules and defeat final bosses at the end of certain attractions. Mr. DRILLER DrillLand also features competitive multiplayer modes where up to four players can race to the finish or battle it out in Drill Land on one console; a “Casual Mode” is also available for players who want to dig and explore Drill Land at a leisurely pace and enjoy a day in the park.”

Mr. DRILLER DrillLand is out now in Southeast Asia for Nintendo Switch and STEAM.