ONE PUNCH MAN: The Strongest is available to pre-download now 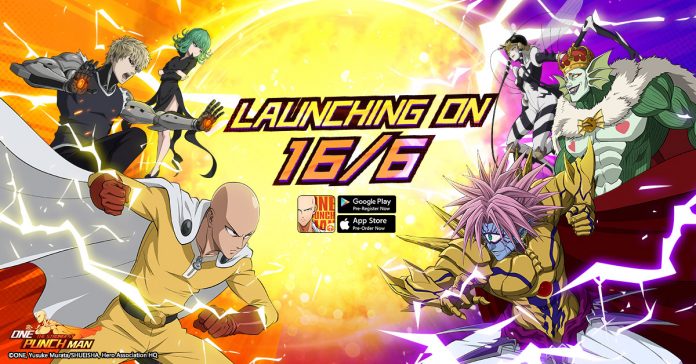 One Punch Man: The Strongest, the first authorized One Punch Man mobile game developed by Playcrab and published by Finger Fun Entertainment, is now available to pre-download! Pre-download of the game is available in Southeast Asia started at 12:00pm today, meaning players from Southeast Asia countries can download ONE PUNCH MAN: The Strongest from Google Play and App Store.

As of today, the number of pre-registered players has exceeded 4.5 million, and the game will officially be playable tomorrow, June 16. With the pre-download available today, we will finally find out who will win grand rewards. In case you missed, it, during the game’s pre-registration phase, players who pre-register will get a chance to win an iPhone 11 Pro Max and Nintendo Switch.

In order to thank so many Southeast Asian players for their love and support for the ONE PUNCH MAN: The Strongest, Genos’s CV cast Ishikawa Kaito sends his greeting video to all Southeast Asia players.

While the game will officially launch tomorrow, we got a chance to test out the game ahead of its full release. To start off, the game lets you take control of Saitama in a Story mode that faithfully follows the events of the anime. So as you can expect, Saitama only needs one punch to vanquish his foes!

Of course, being in control of Saitama will get boring if that’s all there is to the game–thankfully, it’s not. In fact, the Story mode is more of a reward that the game gives you from time to time; the main meat of the game is its quest mode. In this game mode, players take control of a selection of heroes that they are able to obtain such as Genos, Mumen Rider, and other heroes that should be familiar to One-Punch Man fans. Players will use these heroes against various enemies in a turn-based combat system.

The quest mode offers lots of tactical options for players, which is especially needed in boss fights. But for the most part, the game’s early quests are not too difficult. In fact, there’s even an option to have the game play itself with the auto mode. This is quite useful for mobile gamers who are busy but still want to play something on the side.

While the quest mode can be fairly relaxing, players looking for a challenge will be happy to know that these quests can be replayed in hard mode. In this mode, players likely won’t make it by coasting through and using the auto battle feature. To get through hard mode, players must also improve their characters stats and abilities through the game’s deep character customization system.

So how do you get new heroes? Through the game’s gacha system of course! In this gacha, players can get various heroes. If you get lucky, you may just pull SSR characters like Tatsumaki, who are not only very popular, but are quite powerful indeed.

From what I’ve played of the game so far, I can say that One Punch Man: The Strongest is definitely a must-play for both One-Punch Man fans and gacha game fans. Not only does it have engaging combat, but it also has lots of deep and rewarding systems that I haven’t even scratched the surface of. To top it all off, the game features scenes and clips that come straight from the anime, and it even features voice actors from the series!

To find out more about One Punch Man: The Strongest, check out the following links: