We now have an official NASA board game, based on actual moon missions 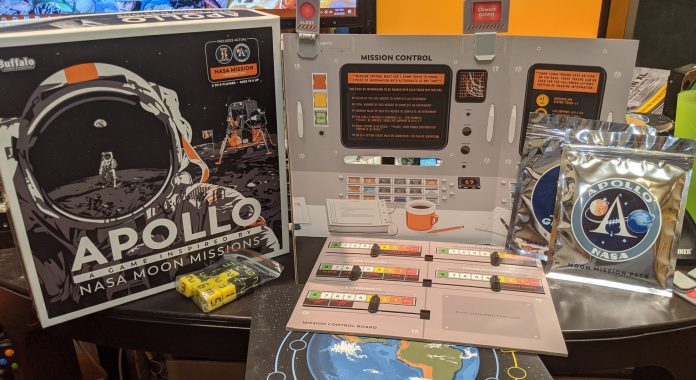 Its been awhile since I wrote anything about board games. Now more than ever, I really miss playing analog with friends over the weekend. I have to admit, things changed quite a bit in the cardboard scene ever since an IRL “Pandemic” hit us.

Much as I really want to get back into board games, my only options are either playing with friends using an online tool like Board Game Arena or visiting a lot of board game news portals like BGG, and checking out what’s the current hotness on Kickstarter. Why am I saying all this? Well because one particular game really caught my eye and got me excited!

In a recent Facebook post by Jonathan Gilmour, he revealed an upcoming game called Apollo: A Game Inspired by NASA Moon Missions. And based on the images, this looks to be a finished product that’s ready for take-off!

Here’s what he has to say from his post followed by a brief description of the game coming from the box:

“Super excited to finally get to talk about this game! Sarah Addison co-designed this and I don’t know if I have ever put as much work in such a short time frame into a game as I have this one. Sarah definitely took a strong lead on the design and really showed her design chops off! We play tested this so many times in such a short period, and so many designers said we were insane for trying to do it.

Thank you to Pandasaurus Games and Buffalo Games for the opportunity to make an official NASA game. If I went back and told Kid me who wanted to go to space camp that I’d get to do this, they wouldn’t have believed me.

Also, those sliders are a REALLY smart design. I don’t think I’ve seen any like that before. I love a good solution to a track like that.”

You are “Go for Launch!”

1961. President Kennedy challenged the nation to land astronauts on the moon by the end of the decade. Now it’s up to you to walk in the footsteps of NASA’s pioneers and embark on the missions that made history… FOR ALL MANKIND>

Play as MISSION CONTROL and ASTRONAUTS. Work together and strategize to complete flight stages, overcome obstacles, repair the spacecraft, and keep communication clear. It’s the team that determines if the mission SUCCEEDS or FAILS.

“One person is Ground Control, and the other players are on the mission, and the communication is limited between the two. Ground control knows all the stuff that’s going wrong, and has to figure out how to best communicate it to the Astronauts.” -Jonathan Gilmour

Based on the description, Apollo looks to be a full-on cooperative game for 2-5 players where one person takes ground control while the rest are astronauts going on a mission. Communication seems to be a key factor in the game, though I’m assuming it will have a mechanic that limits giving out details to everyone just to keep an element of tension and suspense going.

Components seem to be top-notch as well! Just look at these sealed mission packs! In my head though they are both ice cream and spaghetti, respectively. If its not too obvious, I’m really excited for this! Game-time seems to be right up my alley as well, with a 30-60 minute duration.

No official release date yet but when I asked Jonathan Gimour on when this will launch, he said “I think real soon!”.*

I can already hear the countdown.

- Advertisement -
Previous article
Fan-favorite JRPG ‘The World Ends With You’ is getting an anime project
Next article
Here’s all the official outfit and QR codes from KFC!