Place your bids from August 1-7 and help medical frontliners to boot! 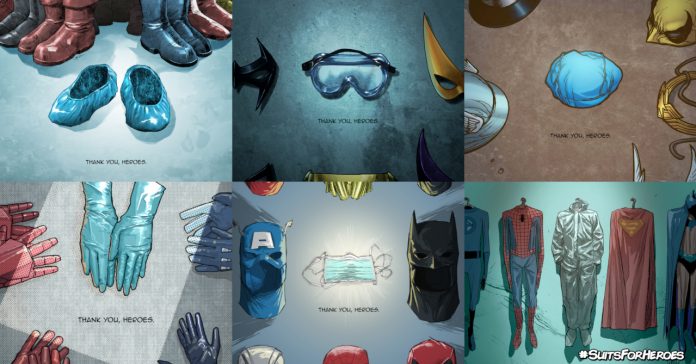 Earlier this month, Comic Odyssey announced the #SuitsForHeroes initiative, a fundraiser for the benefit of medical frontliners in the Philippines. Specifically, the initiative’s goal is for the Pinoy comic book community to come together to help purchase peronal protective equipment (PPE) for Filipino frontliners–the real-life counterparts of comic superheroes.

Following the donation drive which served as the campaign’s first phase, Comic Odyssey has announced that the final stage of the initiative–the art auction–is about to start.

The #SuitsForHeroes art auction will feature high-quality prints of the campaign’s art pieces. From August 1-7, 2020, fans who are interested may visit the auction site and place their bids. The highest bid for each will win the print, with each print to be rendered on 12×18” board paper, and autographed by the artist who created it.

Here’s a look at the prints that will be part of the auction:

Alongside the six prints, the auction’s highlight is the original artwork of Suayan, who
created a physical painting of his piece instead of a digital creation.

#SuitsForHeroes is spearheaded by Comic Odyssey, in association with Filbar’s and Planet X, and in partnership with Wunderman Thompson Philippines. Proceeds from the initiative will benefit the PPE-purchasing operations of Frontliner Feeders Philippines, Kaya Natin, and Philippine General Hospital Medical Foundation Incorporated.

For more info on the campaign, visit SuitsForHeroes.com.