The slow and peaceful life that everyone wants to have. 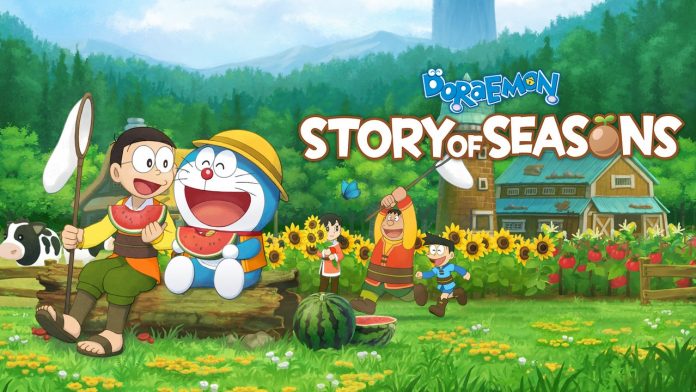 I still remember the time when me and my brothers was crazy about this robotic Blue Cat from the 22nd Century–Doraemon. We tried to collect all the stickers that we can find, stay up late just to watch the late night reruns; it even reached to the point that we nagged our parents to get us our very own Doraemon. Yes, it may sound ridiculous, but that is the very same reason why this peculiar cat is very close to my heart.

So it’s no surprise that if when given the chance to play a Doraemon game, you bet that I immediately hopped on. But what made this new game even more easy to enjoy is it’s a Story of Season game which is basically my favorite kind of simulation game. A game series with a formula that everyone has already welcomed and become familiar with. But before I reminisce again about the show and the game series, let’s put our focus towards Doraemon and the gang’s new adventure to Natura and see if this attempt of mixing two things from my childhood can mix well. 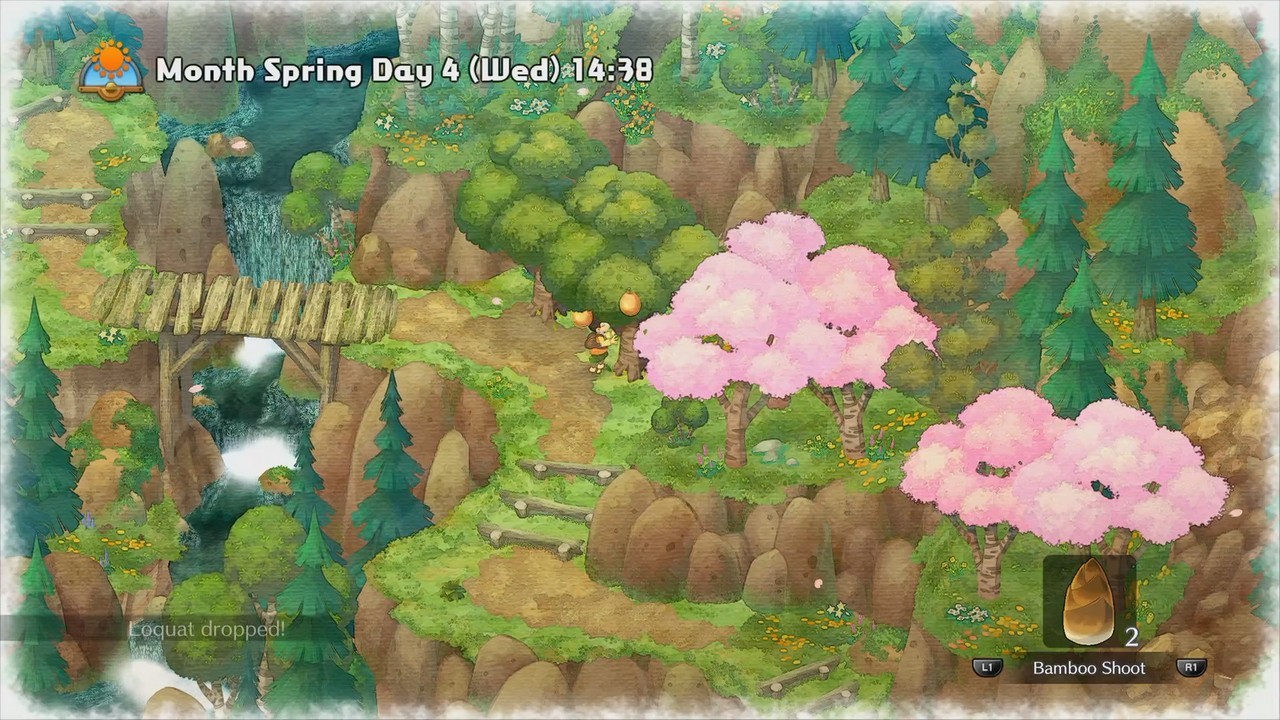 One of the game’s highlights is how the environment looks like a hand-drawn picture book while still having 3D character sprites. Everything looks like it was painstakingly drawn just to get the smallest detail in the right places, and looking even closer, there are noticeable watercolor-like marks. This makes for a soothing aesthetic that fits the game’s theme and premise well. 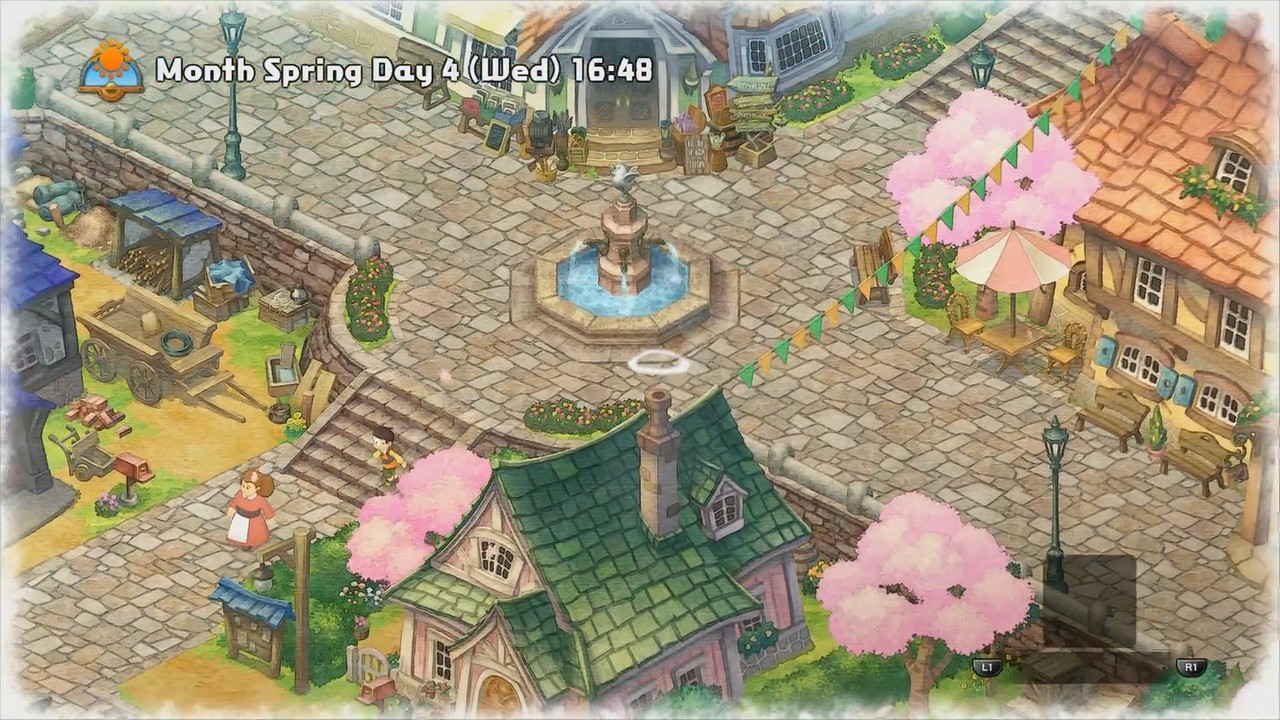 Since I missed tons of Doraemon movies, the character design that is embedded in my memory was from the 1980s TV show. So it’s a bit weird to see, especially Big G’s (Damulag) design to be different from what I remembered. Doraemon is one a long-running series from Japan, so character redesigns and updates are understandable.

While I love the game’s mix of 3D character models and 2D environments, there are some minor graphical issues. During cut-scenes for example, character impressions are lacking as they are just stuck with one smiling face, even when showing distress. I might be a bit too critical on this remark though, since characters do express their feelings through the dialogue, plus they have huge pictures to show the faces they make during conversations.

Then there’s the fact that whenever Nobita (Noby) wakes up in the morning, he will make this stretching animation that instantly teleports him out of bed. Not a real deal breaker, but quite bothersome to look at especially when you have such a well drawn world.

The Never Ending Story of Doraemon 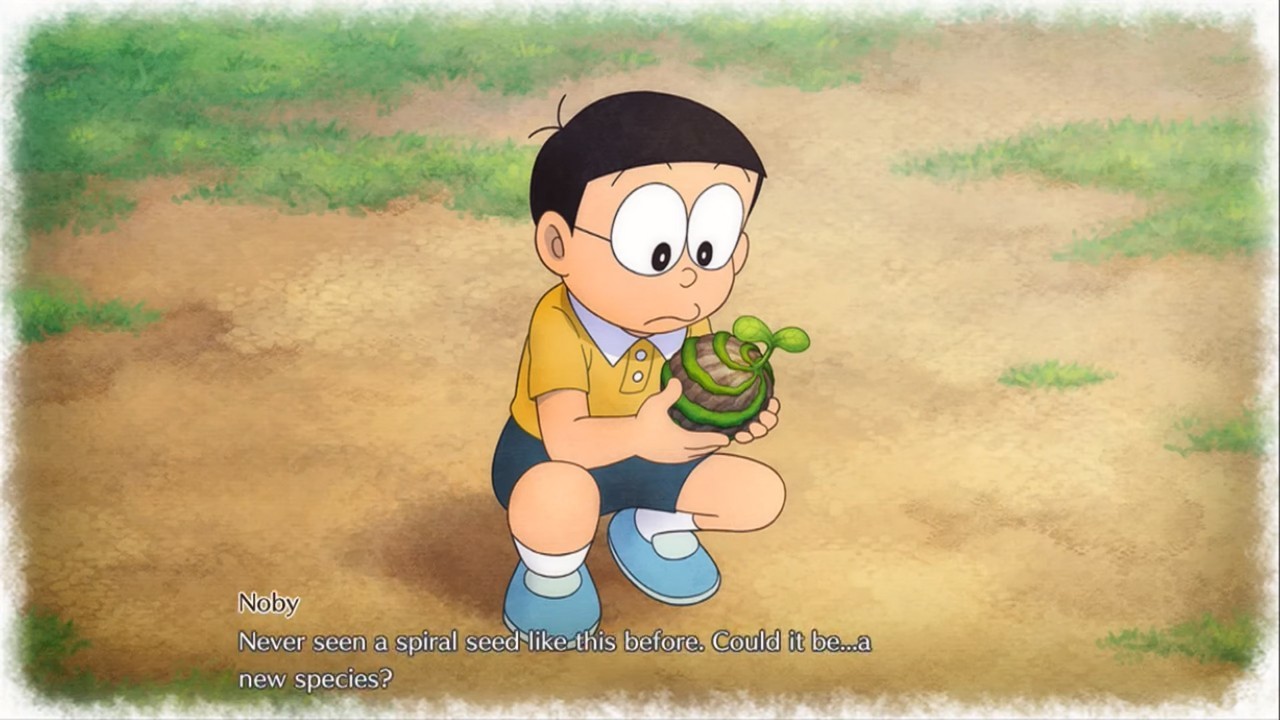 The first thing that I remember when a Doraemon episode begins is it’s always Nobita (Noby) running snot-faced towards Doraemon asking for help, or Nobita day-dreaming to escape reality before he gets interrupted by whatever that episode’s theme is.

The case is the same here in Doraemon: Story of Seasons as Nobita (Noby) stumbles upon an oversized seed and decides to plant it as their summer group project. Much like in any other Doraemon episode, this leads Nobita and his friends to an adventure to a different world as they get sucked into a weird storm when the seed suddenly grew into a tree. Imagine this scene as a mashup of Wizard of Oz and Jack and the Beanstalk. 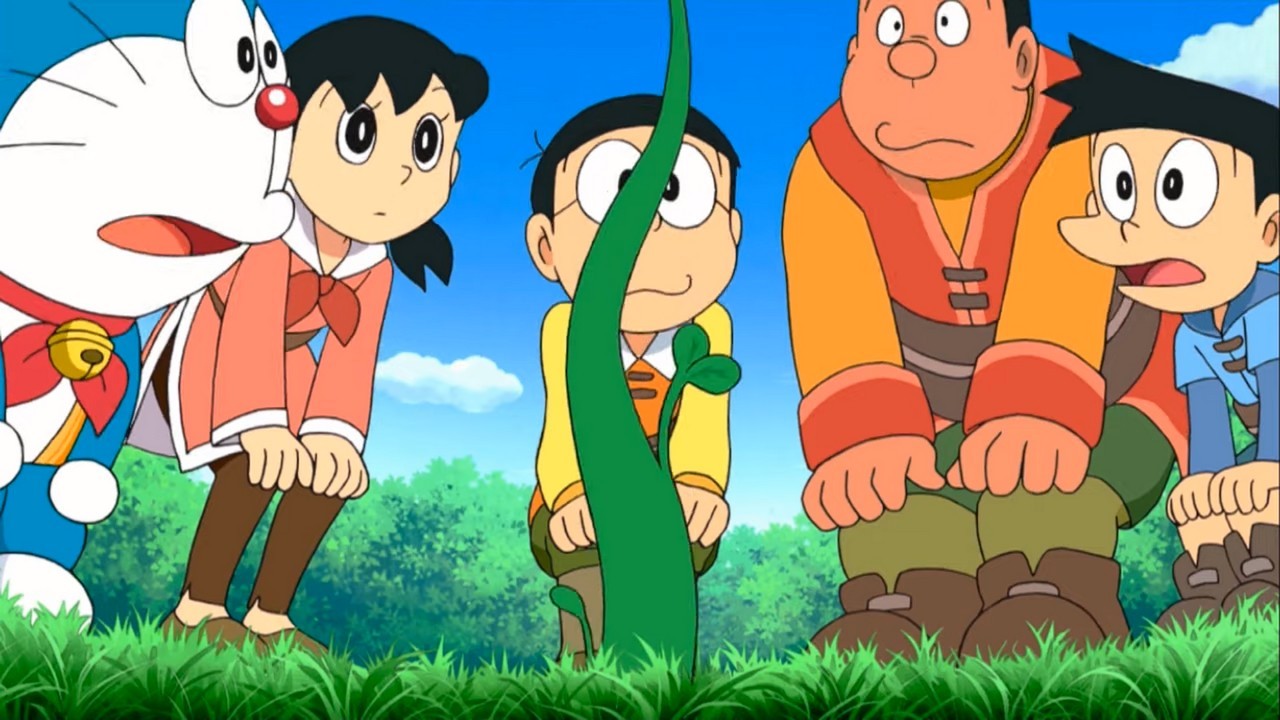 As they wake up, they find themselves in a different place called Natura and taken in by a young boy named Harmon along with his Grandma. But upon finding out that they can’t find their way back home and that Doraemon has lost  his gadgets, Harmon explained that in order for the group to stay in their town, they must abide by its way. Kids must work in order to live. While this sounds cruel and can raise your eyebrows upon hearing it, this is Doraemon game so there must be a moral here somewhere. While everyone managed to find their own Job and places to stay, only Nobita was left behind with no job to take. That is when Harmon lent Nobita his rundown farm (which I really think a bit too much for the wimpy kid). 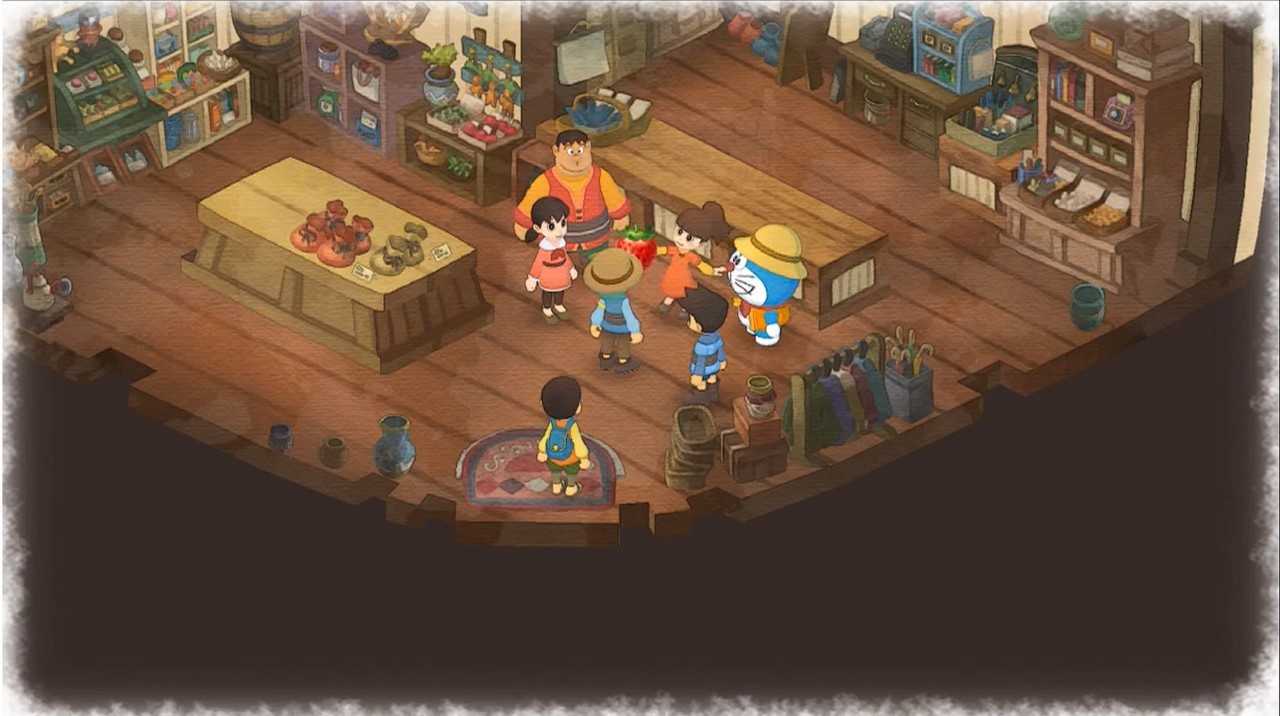 It really feels like I’m watching Doraemon as it follows the same format like the show. But to tell you the truth, I’m not a huge fan on how slow paced the progression of each scene, especially during the first hour. While I do enjoy the world of Doraemon, I’m here to actually play “with Doraemon,” so many people may  find it really slow and might skip ahead, especially during the first hour.

Another problem is that I’m not a huge fan of regarding the story-telling is the lack of voice acting. Characters do say a few lines during the dialogue, but reading a whole wall of text during a slow storyline is not the best experience. It would have been better if they added a full English voice option during cutscenes.

Its a Farmer’s life for Me

After finally going through all the talking and letting Harmon teach the basics of farming during the first hour of the game, we can finally play the game. Much like in any other Harvest Moon/Story of Seasons game (and any other farming simulator for that matter), your farm starts as a total mess and requires you to clear the planting field of rocks, branches, huge rocks, actual trees, and weeds. So if you are familiar with the aforementioned games, then there is nothing to talk about as you will definitely do the very same routine from those games in terms of taking care of the farm. Later on, if you manage to save enough money, you can make the farm look even better. 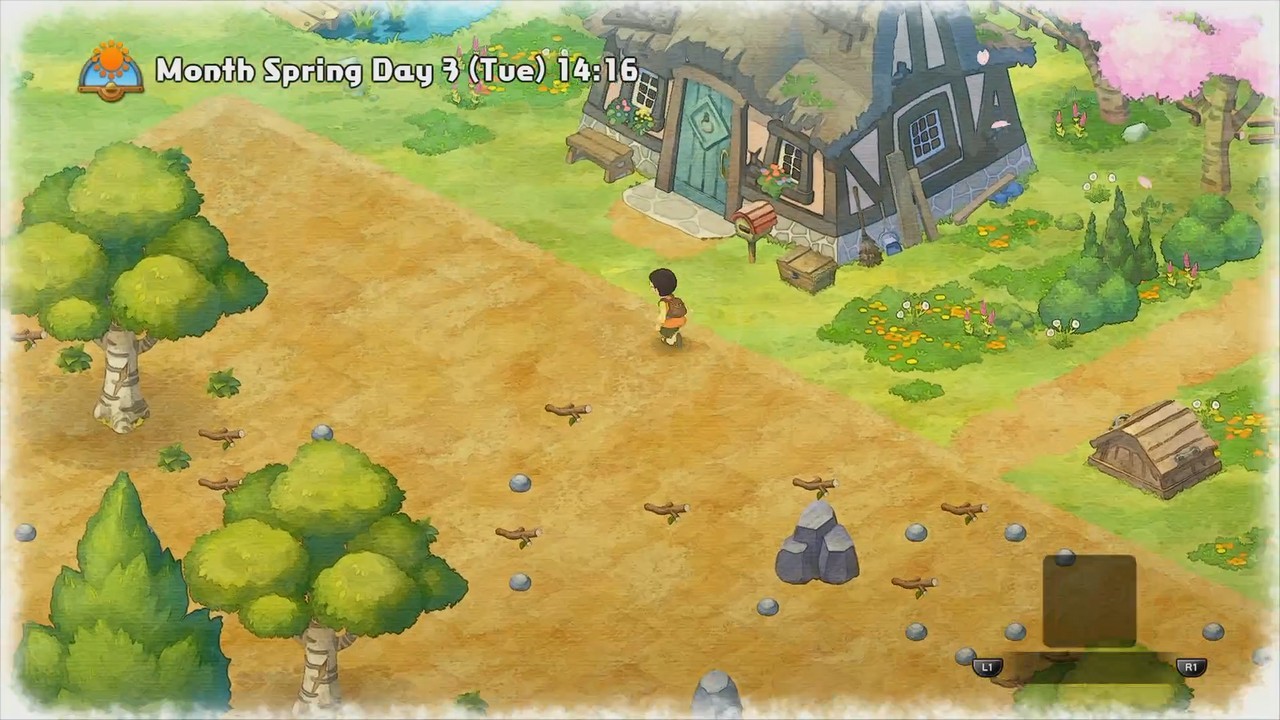 But like from other games, farming is not the only way to earn money. When you visit other places, you can unlock other activities to earn money like mining ores from the mining cave or catching fish when you acquire the fishing rod. You can also purchase a Bug net that allows you to catch bugs, which is perhaps the fastest way to earn money during the early point of the game. 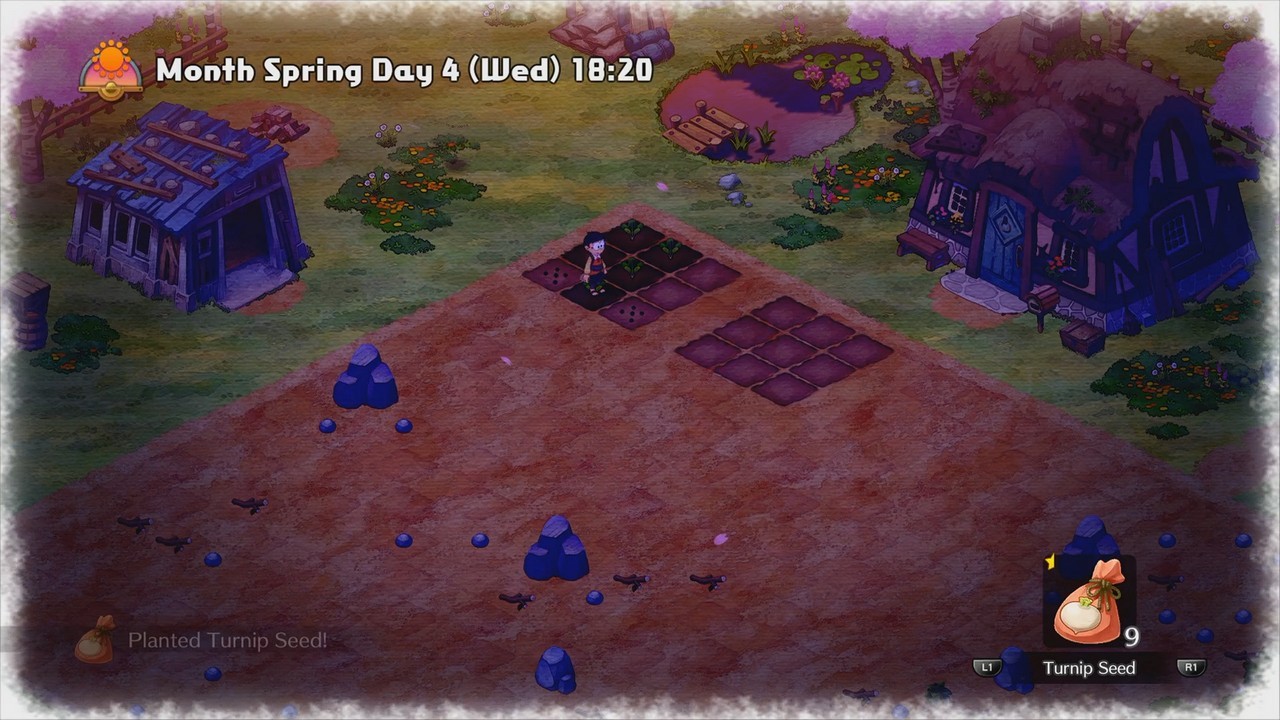 Do keep in mind that time and stamina management is a must in these type of games. You can’t let Nobita work all day as every action he makes will consume his stamina, and he will stop working when it drops to 0. While time is very important – especially if you want to visit certain shops or befriend the towns people – if you do find yourself with nothing else to do, you can hit the X button to let Nobita take a nap and set the duration of his nap time. This will recover some stamina and will also let you schedule the time of work. 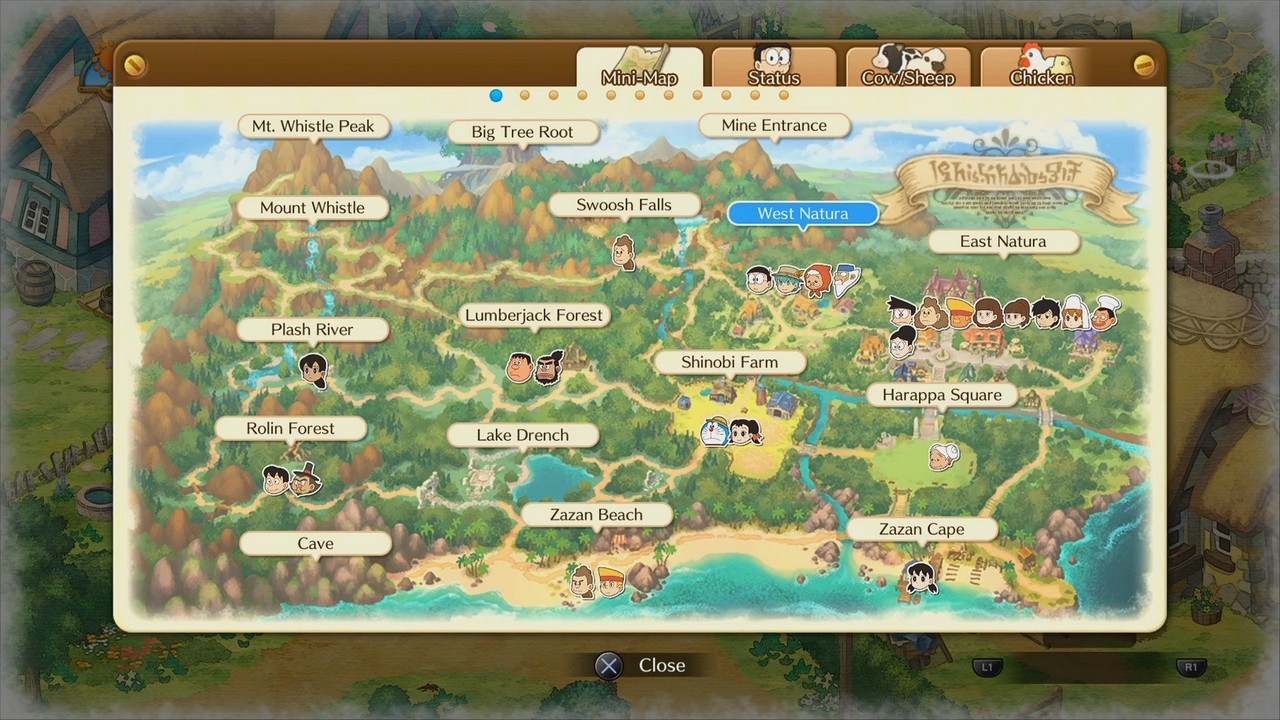 As this is a Doraemon game, expect that friendship is our way back home. Because many of Doraemon’s lost gadgets are picked up by the townsfolk, befriending each one is the key for their return. So you better plan and balance your working time and visits to the town.

While fun,  there are some issues with the gameplay. For one, the controls feel kinda awkward. I’m not saying that Nobita is hard to control, he just feels awkward to move around the farm. Comparing how the game picks up crops to More Friends of Mineral Town (GBA), the latter feels more efficient in terms of doing stuff around your farm.

Another complaint about Nobita for me is that whenever he uses a tool like the Hammer, Axe, and Pickax, he always yells “Ey.” Just imagine, you’ll be stuck with him for the long hours of gameplay doing monotonous task while he picks his way through your brain with “Ey”. So word of advice, turn off the voice and save yourself from the mental torture.

Still, the whole gameplay follows the very same formula from the other farming sims (sans marriage options), but it does have some interesting additions such as fertilizers for the crops and the Nap function; these are welcome additions as they add more to Doraemon’s core gameplay. Then there’s the fact that exploration and trying to befriend and get involved with the other townsfolk are fun. Overall, these details adds some charm to the fairly standard farming simulator gameplay.

Thanks to its charming characters, beautiful art style, and familiar farming simulator formula, Doraemon: Story of Seasons is a fun and relaxing game to pick up and play. While there some issues such as the overly long introduction and other annoyances, these are all farily minor.

Once you get past the the long intro, you can expect a charming ride with the familiar characters of Doraemon. So, if you are looking for a alternative from the main Story of Seasons games and love Doraemon, then Doraemon: Story of Seasons is just for you!