Is the new League of Legends Champion ‘Seraphine’ Filipino? 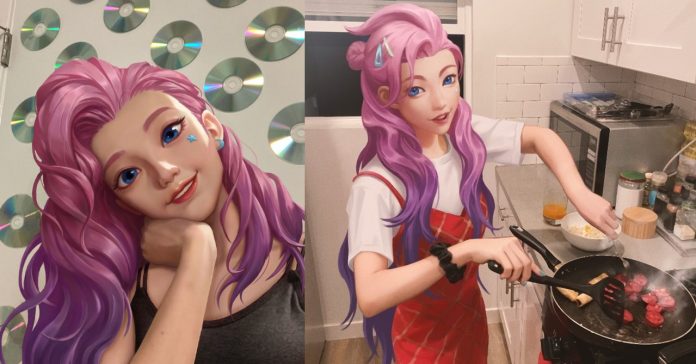 Seraphine is the rumored new champion releasing in League of Legends. While Riot hasn’t really said anything official, Seraphine’s social media posts have hinted at her status as the next LoL champion, even though she’s self-described as an “aspiring songwriter” (and professional feeling catcher).

it's karaoke night and i'm singing tong hua for the 5000th time pic.twitter.com/Y35ag1JCGQ

Right now, we don’t know much about her connection to LoL, but we do have an idea about Seraphine herself. The possible new LoL champion dotes on her pet cat Bao, loves singing, and takes lots of selfies.

In an Instagram post a few weeks ago, Seraphine is seen cooking what seems to be Lumpia and Tocino or Longganisa. While we can’t say for certain if she’s actually cooking Lumpia and Tocino/Longganisa, what we can say is that she’s not doing the best job at it.

Seraphine possibly cooking Filipino food was caught recently by GLOCO who posted this on his page:

Of course, this is all just speculation as Riot nor Seraphine herself haven’t confirmed anything yet. At least, we won’t have to wait too long as Seraphine will likely be revealed as the next LoL champion at Worlds 2020 this September.

Or maybe Seraphine will be revealed as the next K/DA member when the group releases a new single on August 28!