A BIG bold step in the right direction 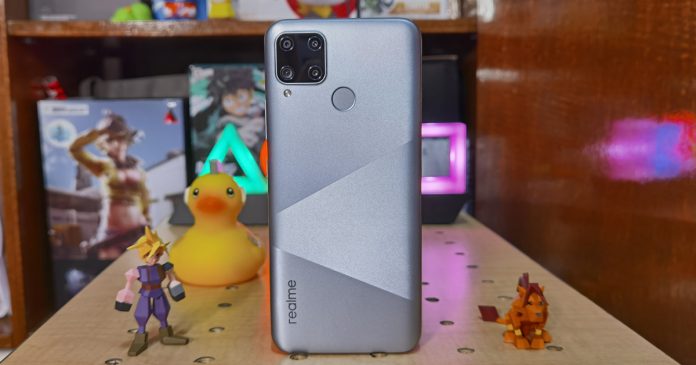 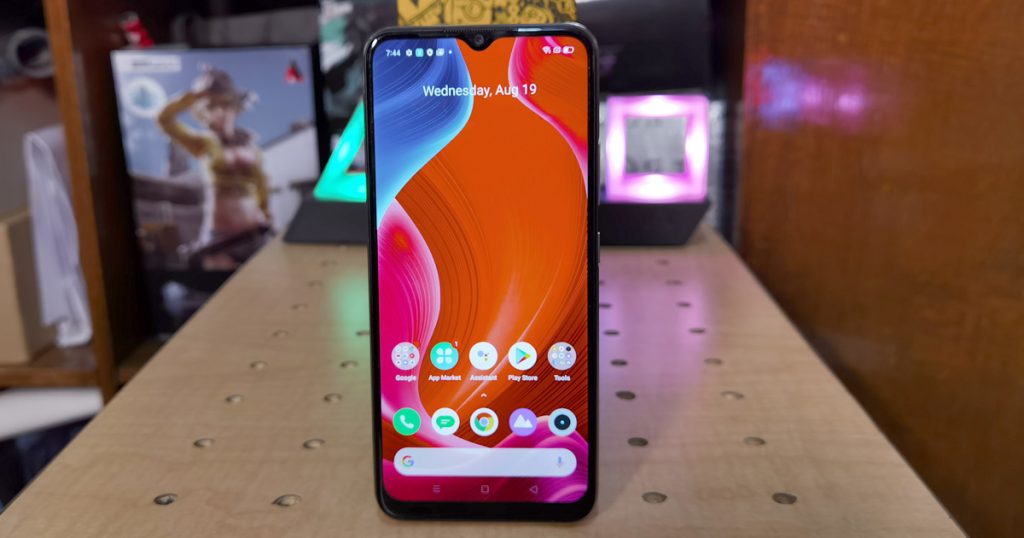 While the realme C11 basically rolls out the basic of basics (and does so with spectacular results), you may be in the market for something that may have a little bit more firepower on an entry-level line. Here comes the C15 – a smartphone that won’t break the bank but offers a BIGGER leap to what an entry-level could be. 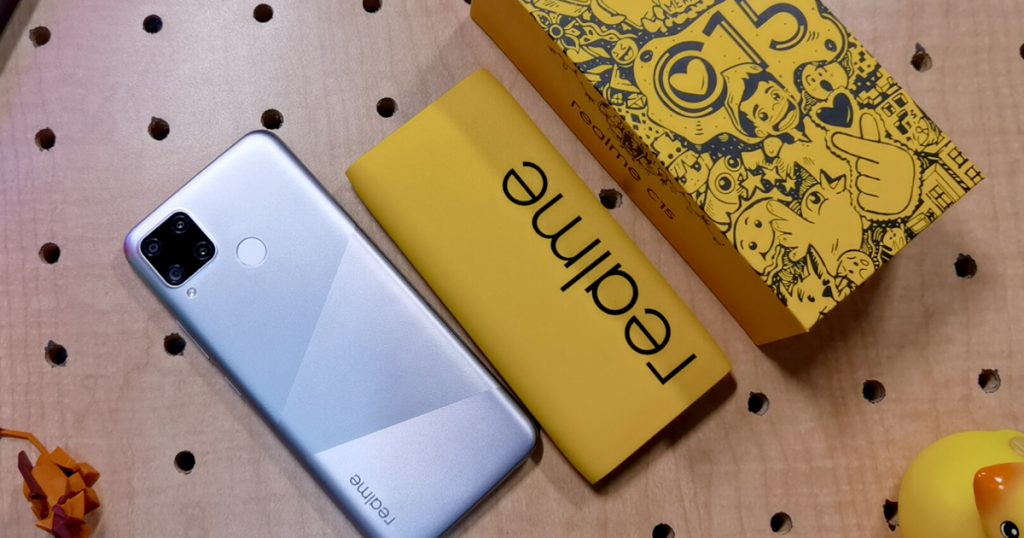 As what we’ve seen from the other devices in the C-line, the C15 comes with a polycarbonate body; hence it will give you that plasticky feel to the back cover. However, the total construction of the unit still gives it a certain heft and quality. The Geometric Gradient Design adds varying texture and grip to the phone. The C15, taking design cues from the C11, does away with the usual glossy, fingerprint magnet back cover designs of the past and utilizes a textured matte finish. This makes the phone fingerprint smudge resistant. The C15 comes in two colorways, the Seagull Silver (which is what we got) and a deeper Marine Blue for those who may want a bit more of color in their life. 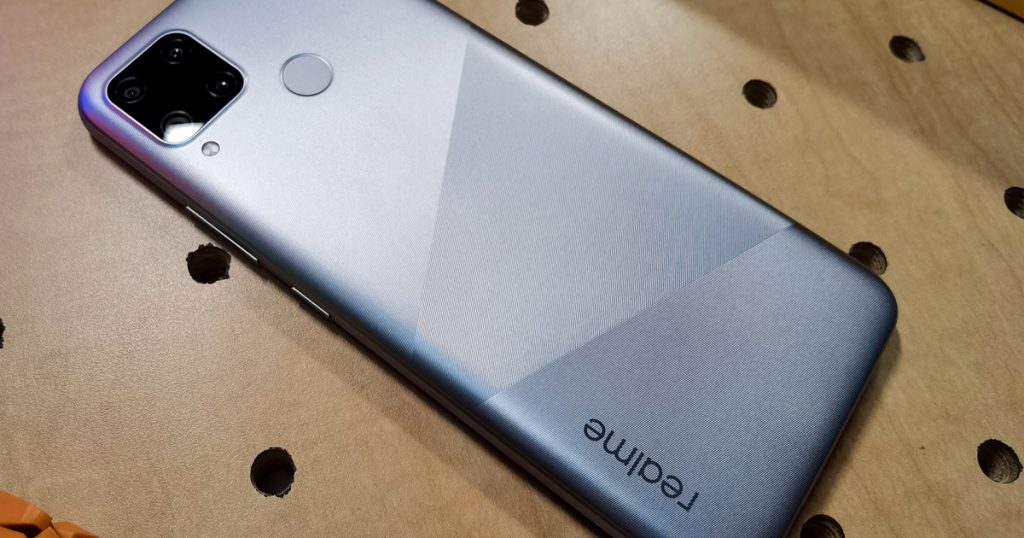 Jumping on the square camera module configuration of the C11, the C15 fills this all up with cameras. Yup, this is the first quad-camera setup for the realme C line. It also has a fast-fingerprint scanner button situated in the middle of the back cover. 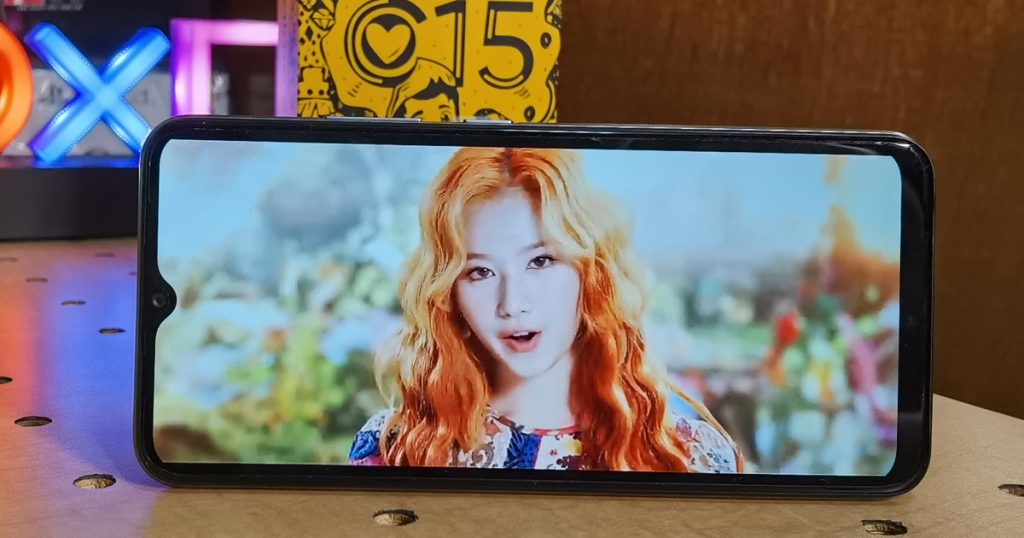 Having a large 6.5-inch HD+ display with a micro drop-notch gives this phone an 88.7% screen-to-body ratio. While we were hoping that realme could shave a bit more from the chin just to open this a bit more, watching your favorite movies, TV series or going online to your meetings/online lessons should be fairly enjoyable. Yes, resolution caps at 720p, but you do have to understand that this is still part of the C-line of realme.

If you want to a more immersive experience, it’s best to pair your realme C15 with a pair of earbuds or speakers; otherwise the C15’s internal speakers are decent enough, but you’ll have to push the volume to max if you want to really be immersed with what you’re watching (or listening to). 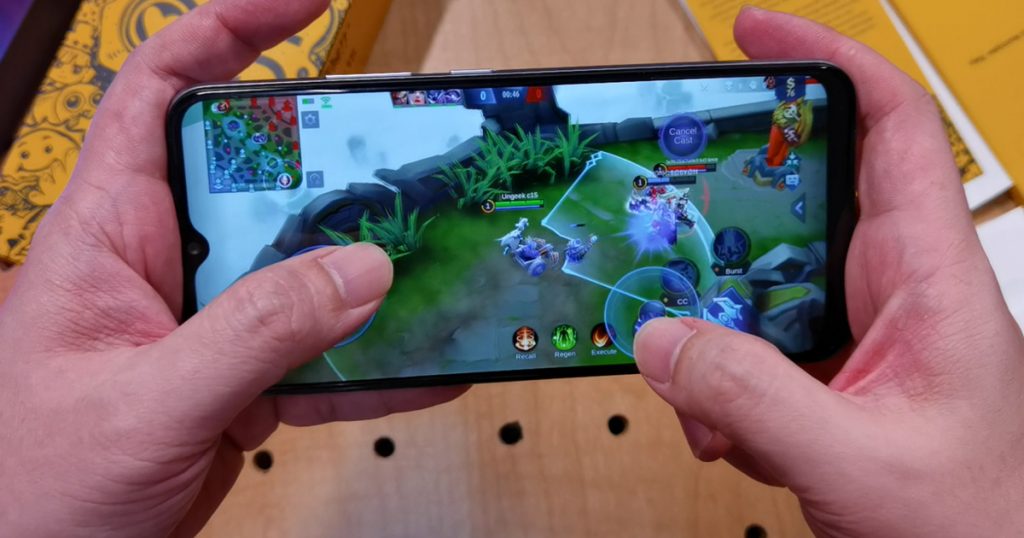 We’ve already experienced MediaTek’s Helio G35 with the realme C11, so we more or less know what to expect with the realme C15 in terms of gaming. This 12nm Octa-core processor will allow you to play your favorite games for the most part. Just don’t expect the gameplay to be buttery smooth all the time.

With a 3GB RAM configuration, you will encounter a bit of game stuttering. Not enough to render playing games impossible, but you’ll want to slide the setting of most games to low to be able to enjoy better framerates.

For Mobile Legends, the game automatically placed the settings to Mid and I still had to slide the settings down just to be able to enjoy the game better. 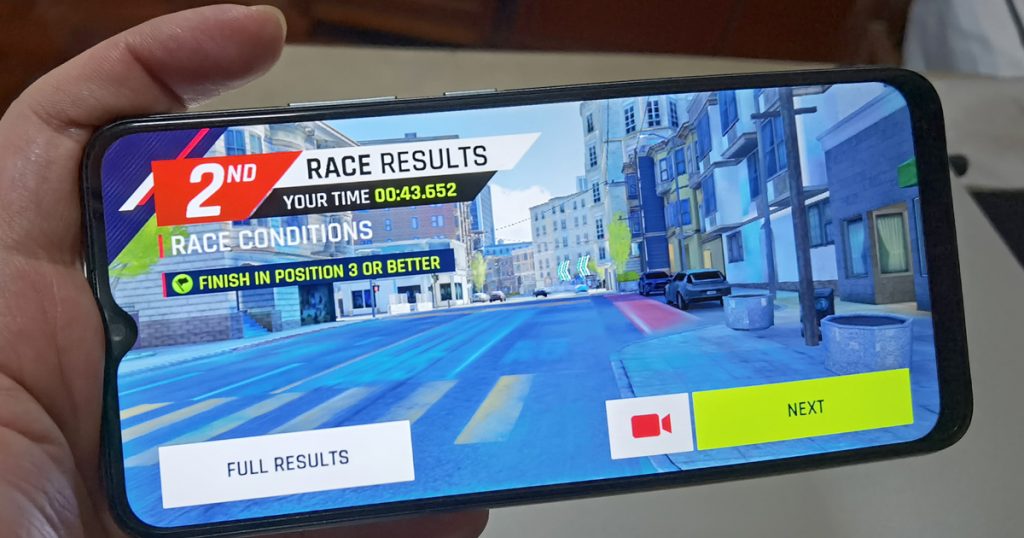 For Asphalt 9, the realme C15 could keep up at default game settings which pushes the graphics to pretty low settings. Do not touch that part and leave it be! 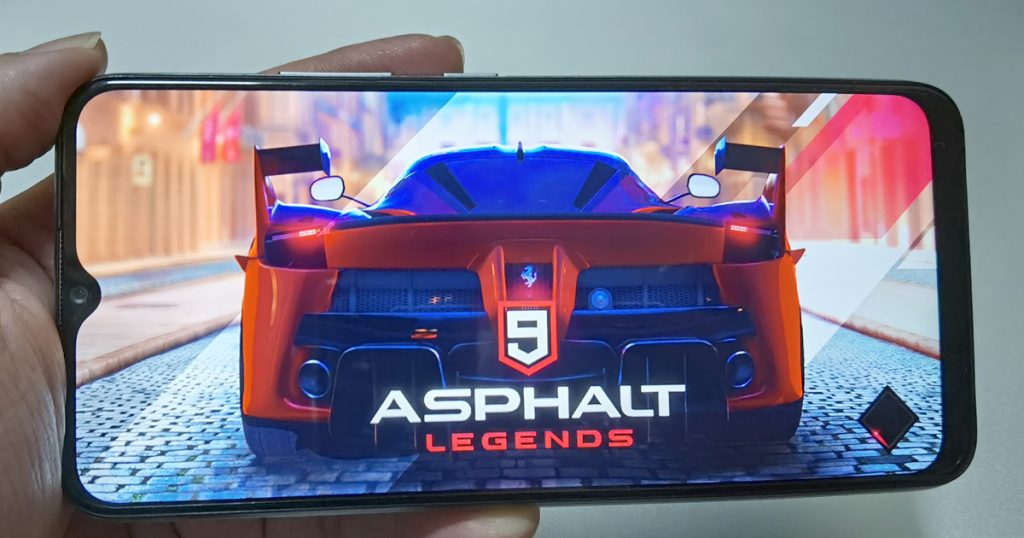 Because the configuration that we have has only 3GB of RAM, we really felt the long wait during loading screens and getting in and out of a game. The good news is, realme will be releasing a 4GB RAM version of the realme C15! That should give you a better gameplay experience.

As mentioned, the realme C15 is the first phone on the C-series to rock a quad-camera setup. Conveniently occupying the square camera configuration is a 13MP main shooter, an 8MP Ultrawide, a 2MP B/W, and a 2MP “Retro” Camera.

The “Retro” Cam is realme’s fancy way of saying bokeh or depth sensor; but it’s not just semantics even. There’s an added technology that allows this cam to take quick shots of the background so that clear separation of background, subject and foreground could be met.

Whether one can carefully see it is anyone’s guess. Here are a couple of sample shots:

As with previous C-series generation, the Nightscape Mode feature is included in the C15. This should help you take better photos during low-light situations. However, you may still need to use a tripod or keep your phone ultra steady when you’re shooting at almost pitch black. Here are a couple of grainy photos:

When you flip the phone over, you’re greeted with an 8MP selfie shooter that has quite a number of enhanced Ai Beautification features. We tested a couple and for the most part it does the job.

Camera wise, while you are getting more with the realme C15, you shouldn’t expect flagship-like photos with this phone; it is still an entry-level offering. However, from the moments we were able to tinker with it, and for the price-point, we’re thoroughly happy with the results. 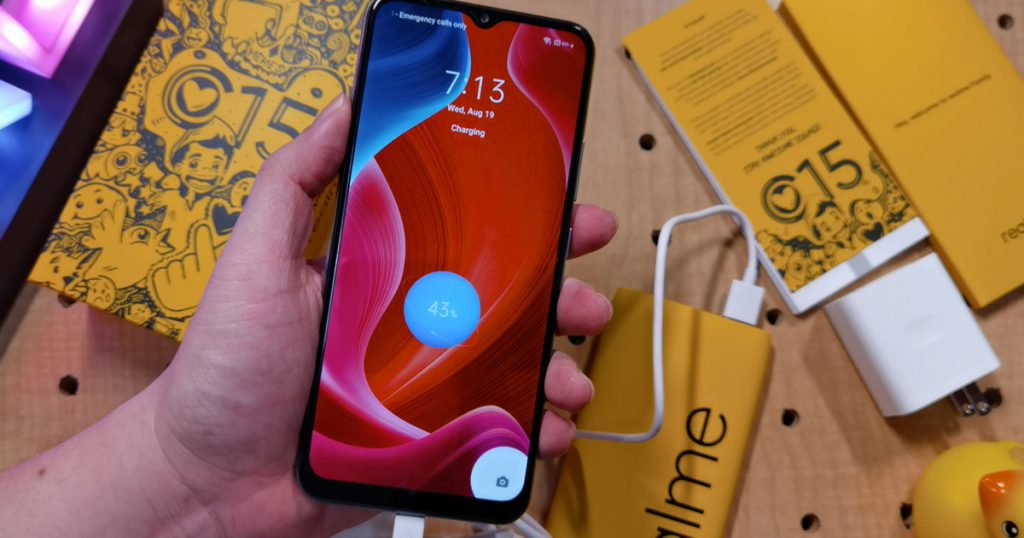 Realme C15 has one of the biggest, if not THE biggest, battery on a smartphone for this category. At 6000mAh, this phone should last you the entire day and a half before you need to recharge and top-up again. That’s a lot of juice. Even if you were to use the phone heavily and have back-to-back Zoom calls to attend, videos to view, things to send, and games to play, the realme C15 can definitely keep up! The only downside to having a large battery is the longer wait time for you to fully charge this behemoth. Luckily, the realme C15 comes with an 18W fast-charging capability allowing you restore from 0% to 25% of power in under 30 minutes.

That being said, the realme C15 still uses a Micro USB connector – something that we’re seeing less and less nowadays. We hope to see the C-line jump into the USB C (no pun intended) standardization. 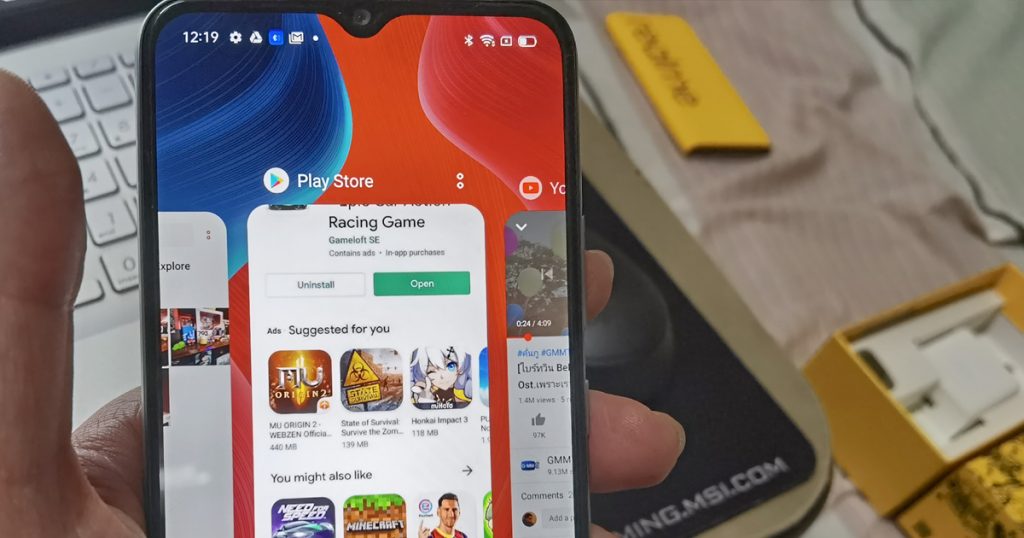 The realme C15 is a good entry-level offering if you want a bit more boost to what a basic phone could give. By adding a few thousand pesos, there are increadibily big improvements from its predecessor. The realme C15 retails for Php 6490 for the 3GB/64GB variant while a 4GB/64GB variant will be available for Php 6990.

If you’re not too keen on getting the limited series PH SquadBox Edition of the realme C15, we would suggest going with the 4GB/64GB variant instead of you can spare a few hundred pesos. That extra 1GB of RAM will improve the experience even further.

The Special Limited Release of the realme C15 PH Squadbox Edition is only available at Lazada and only on a 3GB/64GB configuration (we heard it also sold out in less than 30 minutes). The 4GB/ 64GB variant is available now in partner stores nationwide.