realme Philippines is launching the 6000mAh realme C15 on August 20

The past few smartphones from realme have all had fairly large batteries, but its latest upcoming phone is definitely shaping up to be its longest lasting yet!

realme is set to launch the realme C15, its newest budget smartphone which packs a MASSIVE 6000mAh batter, as well as 18W Quick Charge support. As befits its long-lasting battery life, realme will hold its longest livestream ever! Starting tonight at 6PM, realme will go live to showcase the phone’s various features. The livestream will then continue until the phone’s official price reveal tomorrow, August 20 at 6PM.

While the C15’s battery is definitely its highlight feature, the phone also packs a 6.5 inch LCD screen with a high screen-to-body ratio, as well as an ultra-wide quad camera set-up. 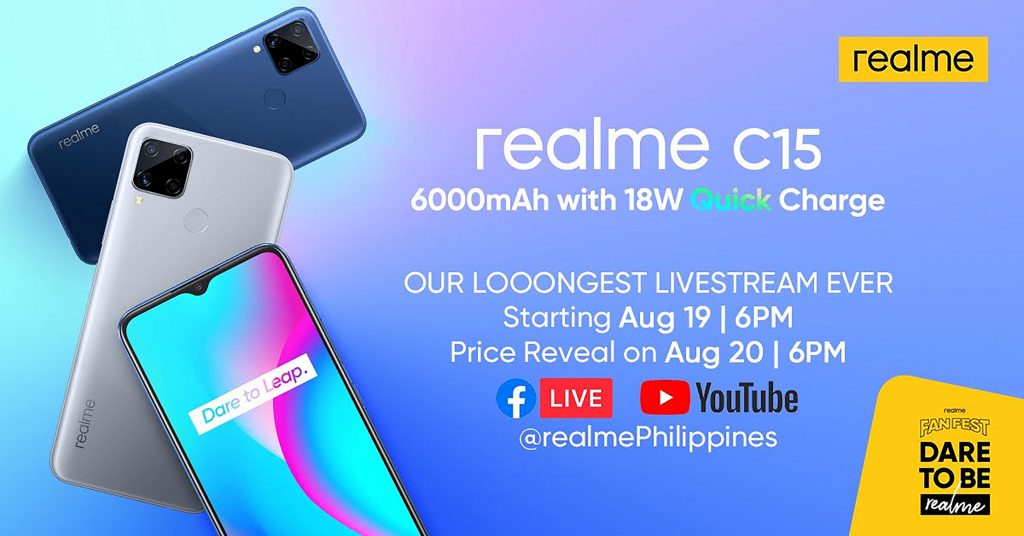 The realme C15 launch is just one part of the realme Fanfest, a month-long celebration featuring fun events for the realme community. Some of the other events during the ongoing realme Fanfest include:

Dare to win more prizes by spotting the realme Angkas

For the Fanfest, realme has teamed up with Angkas for an exciting collaboration! With this event, realme fans must take and upload photos (with the hashtag #realmexAngkas) of one of the 500 Angkas riders wearing a realme face mask and bearing a realme sticker and flaglet. Lucky fans who enter the contest will get a chance to win awesome prizes, including realme AIoT products. What’s more is that even the Angkas rider in the photo will get to win prizes!

Dare to be an official TikToker to win

TikTok users can join in the Fanfest fun by accomplishing various tasks from August 15-28, 2020. Each challenge (which include uploading videos or following pages) has a corresponding point, with user being able to exchange points for various prizes. For instance, the yet to be launched realme C15 and smart wearable realme Watch can be claimed for 45,000 points each.

Dare to be a mobile gaming champion

Finally, realme has announced the third season of the realme Mobile Legends Cup! The latest season in realme’s ML tournament will feature a bigger prize pool of PHP 300,000. More info on the tournament will be announced by realme very soon/