These are definitely creative! 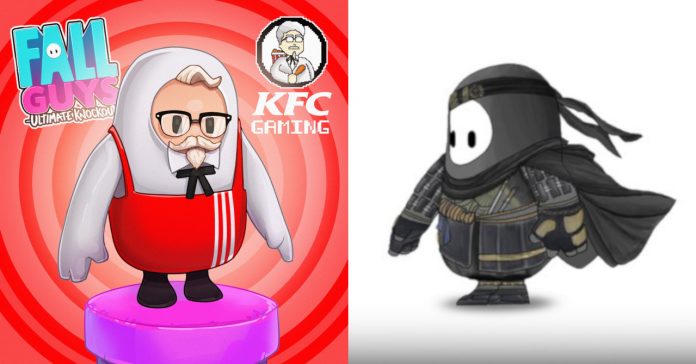 It’s fair to say that Fall Guys: Ultimate Knockout is one of the hottest games right now thanks to its crazy fun twist on the last man standing formula. Because of its popularity, lots of brands are trying to get in on the Fall Guys action via skin designs from fans, as well as from various brands.

One such brand is KFC which isn’t a surprise given the fast food giant is not a stranger to game collabs (remember the KFC restaurant in Animal Crossing?). For Fall Guys, the KFC Gaming Twitter posted an image of a Fall Guys KFC skin which we absolutely need!

We need this skin in @FallGuysGame, Twitter do your thing pic.twitter.com/QjeC8Z4fAy

Aside from KFC, Walmart is also getting in on the Fall Guys fun with its own Walmart vest-inspired skin:

Hey, @FallGuysGame. How do we get a Walmart vest cosmetic into your game?

Not to be outdone, Chuck E. Cheese also had their own take for Fall Guys:

RT if you'd chase some crowns in this skin. @FallGuysGame pic.twitter.com/wKnLjubWPF

We've been carefully designing our ultimate #FallGuys outfits here at KONAMI UK. What do you think, @FallGuysGame? 🤔 pic.twitter.com/N9OigxUzqd

While brands from all over the world are releasing their skin designs for Fall Guys, fans of the game are sharing their own creations based on various games, and even anime:

I’ve been a fan of Overwatch for 3+ years and addicted to fall guys, so why not combine the two worlds? 🧡🤍

You were expecting a Fall Guy Outfit but it was me Dio@FallGuysGame x JoJo’s Bizarre Adventure #JJBA #fanart pic.twitter.com/eZzccLqxn1

Interested in more Fall Guys skin designs? Head on over to the official Fall Guys Twitter as those guys are constantly sharing new fan art!

Given that the Fall Guys Twitter has noticed these skin ideas, here’s hoping we actually see them in the game!