We play games from ads so you don’t have to

Are these games worth a download? Here's what we think! 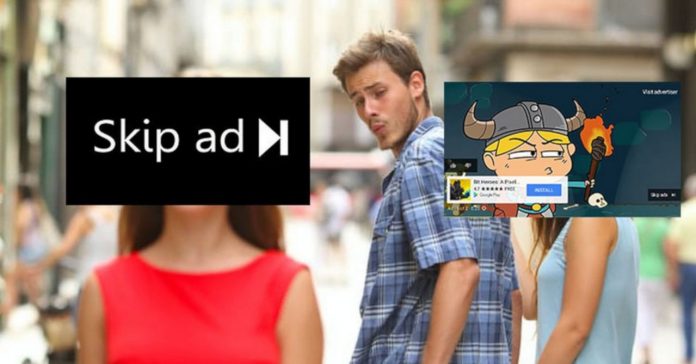 Again, we’re taking the liberty of playing games that you see from Ads so you don’t have to wonder if any of the games you see before watching your favorite YouTuber is worth your time, and worth the space in your phone’s memory.

This time, instead of just looking at one game from an ad, we’re going to look at three games that just out of nowhere pops up on both Youtube and Facebook timeline. So without further ado, read on for what we think. 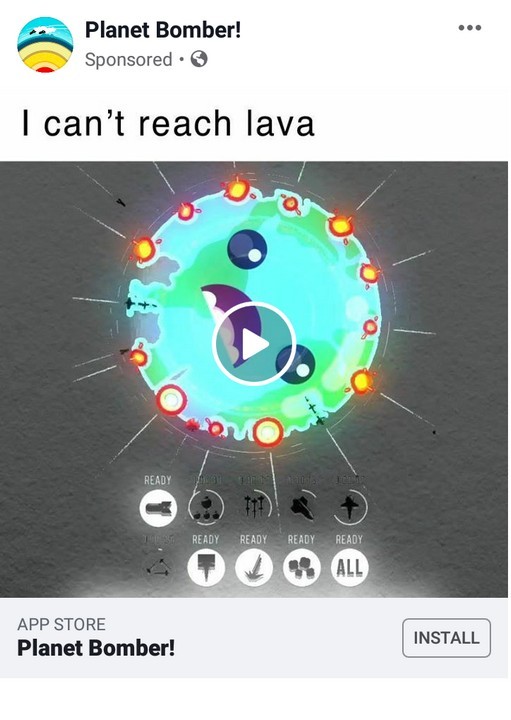 If you enjoy doing nothing then you might actually enjoy Planet Bomber! In this game, each round you send out missiles to one Celestial body, trying to reach its core and destroy it. Missiles automatically fly straight to the planet, but tapping will let the missiles focus on a designated area, helping you excavate the core faster. In each level there are 4 rounds, ending in a boss planet with tighter defenses to hinder your missiles from reaching its core. If you successfully destroy the boss planet in a certain number of rounds, you’ll be rewarded with a more powerful bomb that can further your world ending campaign.

To help you out with your planet bombing, you have access to upgrades that increase each missile’s Power and Spawn rate, the Planets Gravity, Accuracy, and Offline Earnings. Although the changes that these upgrades provide are not noticeable in the early levels of power up. The exception is the missile power and accuracy upgrade as it is the most worth it to get; getting the spawn rate upgrade also helps as it lower the cooldown of special bombs and increases the amount of missiles you spawn. Upgrading your fire power is also recommended as every time a missile lands, you earn a coin (these can also be earned even if you turned off the game).

As with most mobile games, Planet Bomber also allows you to spend a small amount to buy some crystals so you can speed things up. But who would buy these anyway? 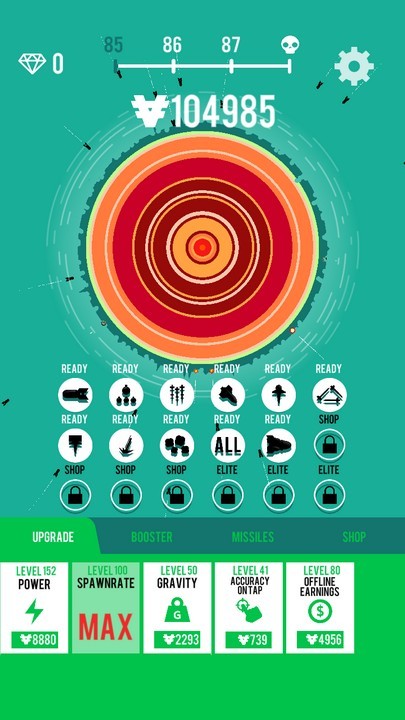 So is it worth your time and storage space? Personally, No. Some might have fun with it, but most players will likely get easily bored with the game. On the flip-side, it barely takes space on your phone since it’s not a graphics-heavy game. Plus, I admit I did have some bit of fun with the game, as the constant tapping and having that one goal in mind did keep me entertained at some points. But the fun only lasts for a short time as stages are all repetitive, so uninstalling when you reach planet 83 is understandable. 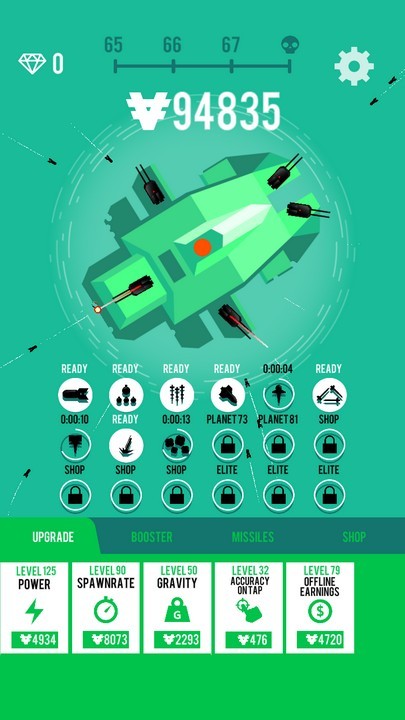 To sum it all up, you definitely get what you see from the Ads in Planet Bomber. There is nothing complicated about this game as the only thing that you will do is tap and wait for the missiles to reach the core. Power ups do exist, but spending money for a boost is not worth it, especially when you can just unlock everything by just playing. You’ll get a minor and short enjoyable experience from it, but the constant pop-up ads can be annoying (so turning off your mobile data is recommended). Still, if you are looking for something to do that you can turn off your brain for, Planet Bomber is at least competent and pleasing to look at. 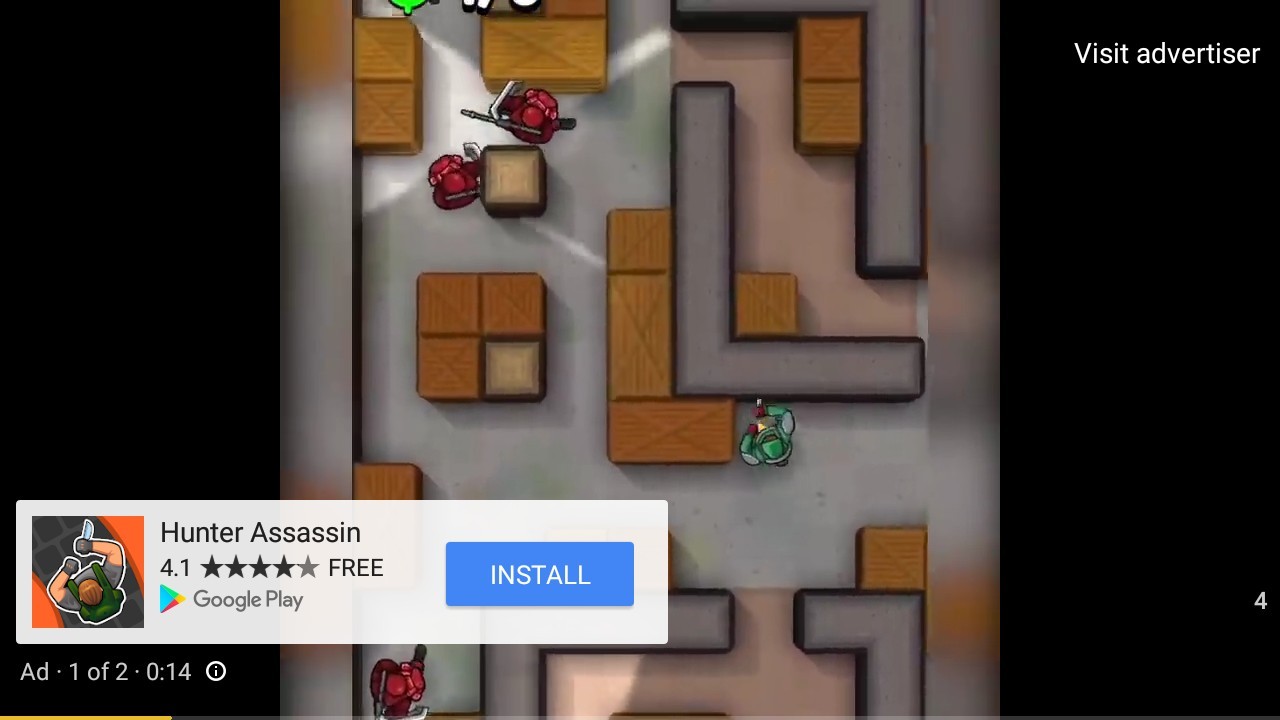 Unlike the first game here, Hunter Assassin is genuinely fun to play despite its simple design and gameplay and lack of backstory. In fact, as soon as the game starts, you are not greeted with any menus or UI of any kind, instead level 1 already begins along with the tutorial.

Gameplay is easy to pick up as all you have to do is stab your unfortunate victim on the back and clear the stage by eliminating every enemy, doing your best not to be spotted. Other enemies are alerted when you kill one while another is nearby, so it’s either you go full Rambo or you circle around them and go for the kill. You can unlock other characters by either collecting diamonds which is rewarded in every stage or keys that are scattered on some levels. By collecting three keys, you can open vaults that contain diamonds or a new character. Each characters gives a boost on either speed or health.

While the presentation and sound is impressive enough, one thing that I don’t like about this game is in every stage that you clear, an ad will play. Not a real problem since you can just turn off your mobile data to solve this, but some rewards requires you to watch a video to collect the rewards.

The game does have a VIP offer that removes all Ads, gives you more diamonds, and unlocks the best character–the Ninja Assassin that throws projectiles. You can start a 3 day trial for free but after that you’ll have to purchase it for $6.99 (PHP 350 not including tax) every week. The developers do deserve some credit, but paying that price every week just to get rid of ads and to unlock a character that makes the game easier is a pass for me.

So is it worth your time and storage space? Yes! if you love simple stealth games, this game is definitely worth a shot. In spite of its simplicity and lack of story, I had a lot of fun with this game. Best of all, it won’t take up a lot of space on your smartphone. The only issue is that the ads can get quite annoying, but it’s a small price to pay for a solid and fun single-player mobile game.

Again another ad that frequents my timeline is Rescue Cut – Rope Puzzle by F.I.L Games. This is a puzzle game where you have to help your character who for some reason is tied up and must escape his captors. Escape can be made by cutting the rope and making sure he/she gets safe passage to the door as the way through it is blocked by obstacles like bears, crocodiles, a cannon, pitfalls, and dudes with guns. There are many levels to play through and a another game mode where you do the same thing, but with cats.

Much like with Planet Bomber!, the ad for this game does not lie on what it can offer. The  gameplay is simple, but perhaps too simple for a puzzle game as many of the stages are really easy while others that are supposed to be hard only take a minute to solve.

Some stages have cages that contains other characters that you can unlock by saving them and clearing that same stage. They don’t provide any benefits or anything, but if you are a fan of the Simpsons or Spongebob, maybe saving them over and over again will deliver you some delight. But what is surprising about this game is it seems that there are no microtransactions of any sort. I reached around level 30, but I’ve yet to encounter any kind of offers which I can say quite respectable. Of course, the game does have ads when you play with an internet connection (they have to get some income after all).

So is it worth your time and storage space? Actually, yes! If you’re itching for some short puzzle solving but don’t want to stress yourself its way better than playing a game that only asks you to mindlessly tap your phone. But if you are a bit squeamish, this game might not be for you as if you fail on escaping, you’ll see a lot of blood. As always the game runs even if you turn off your mobile data, so playing offline is recommended so you won’t get interrupted with the other Ads that will pop-up.

Have you already seen these games from the Ads and considered playing one of these? Or did we miss some familiar ads? Let us know in the comments section! Plus, look forward to the next part as we play even more games that you might’ve already seen in ads.