Watch Dogs is great in a lot of ways, but it falls short in some aspects as well. 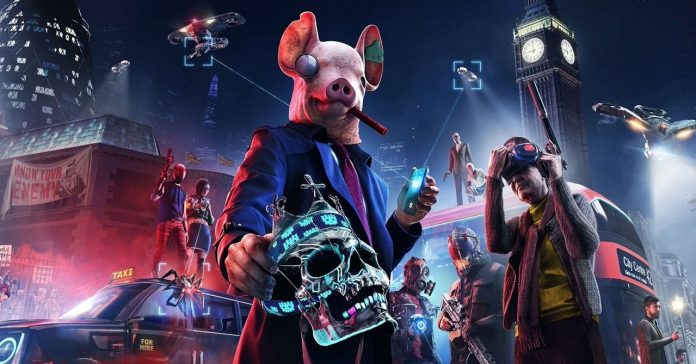 Watch Dogs Legion takes place in a near future version of London and places you as DedSec; and they have been framed for a terrorist bombing in the city. If you’re familiar with the past Watch Dog games, you would know that DedSec uses their power over the network and hacking expertise to bring villains to justice. Now, it’s your job to rebuild the resistance and recruit new agents to the cause and bring down the real terrorist, Zero-day.

The first couple of missions serve as tutorials to help you get accustomed to the systems of the game. Most of it revolves around your ability to hack devices in the game, which has been the staple of the series. You can hack almost anything, be it cameras, drones, cellphones, cars, and more. My personal favorite has to be the spider bot, but more on that later.

Welcome to the Resistance

Once you have your bearings, you’ll need to start looking for new people to recuit into DedSec. You can profile almost any NPC and they each will have a different bio and a selection of skills and equipment based on their background. Switching between agents can help with specific missions and can make it easier or more difficult depending on how well your preparations are. This is important since there is perma-death in the game, meaning if your agent is taken out in a confrontation, at best they might just become injured or arrested, at worst they will die. Though, I feel as that there is not much connection with these characters as you can’t customize them either. I could remember the customization in other recent games, where in I could make myself or my friends and I would do my best to keep them alive. But here, I feel as though it is a missed opportunity.  Many of the interactions between your agents are also very generic and most feel very forgettable. At first it may seem that they are all unique, but as your agent roster builds up, you start to notice some of them having the same voice or speech patterns. Though I do remember Robyn, occupation Spy, who’s gambling addiction keeps earning or losing your money and your notified each time it happens. 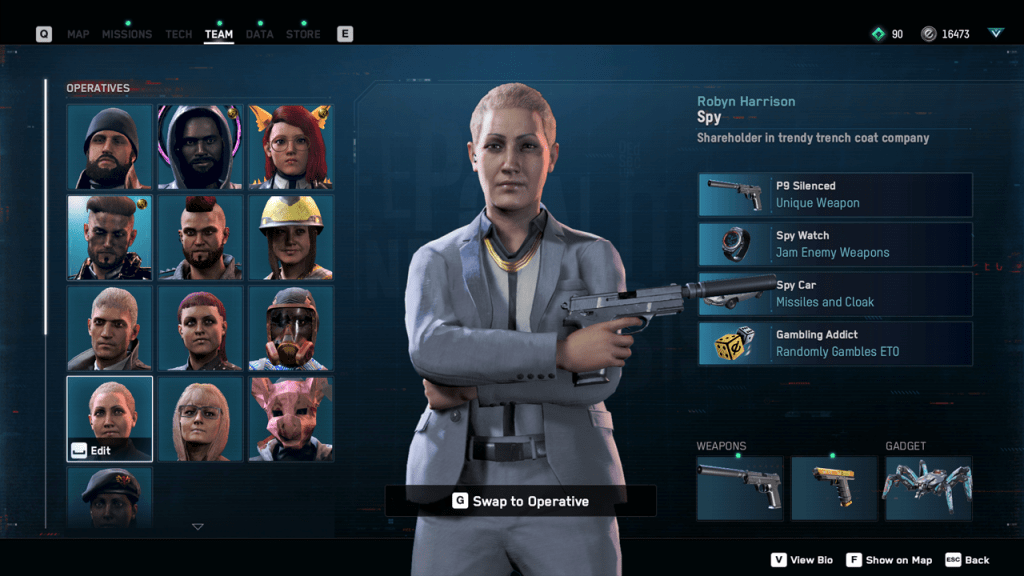 As for the main characters that help drive the story, there is Sabine who is a surviving member of the original DedSec in London, and she pretty much is just there to give you the missions. Then there is Bagley, your AI companion that assists your through out the game. I rather like Bagley as he is written very well with a good sense of humor, and I enjoy the many quips and side comments it makes during briefings.

Exploring London is easy with many fast travel points via the the subway, a.k.a. the “Tube”. But rather than just looking at a loading screen, I would prefer to just use a car or one of the many agents that you can summon at anytime. So you wont have to worry about stealing a car from somebody, but that’s still an option. Once I had a vehicle, I would mark the waypoint on the map and engage the auto-pilot–this would allow me to take in the scenery and see all the historic places pass by.  Sometimes, I even take a quick detour for a potential side mission or an injustice occurring on the side of the road; such things can lure your attention. 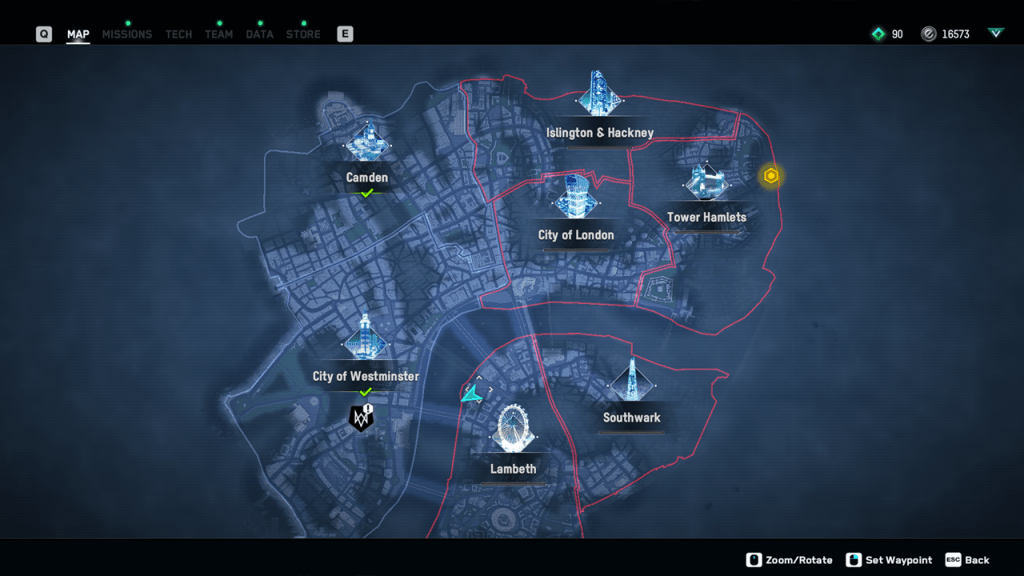 The game’s version of London may be set in the future and is beset with armed forces, though it’s still pretty accurate. While I’m not from the city, I have visited London before, and the game felt true to what I saw (especially the famous sites).

By now, you would have noticed that the Private Military Corp, Albion are everywhere in the city and abusing their position in power; from armed soldiers interrogating random citizens to attack drones constantly patroling from above. Albion is one of the factions which you will need to deal with to liberate London and its buroughs/districts. This can be done by completing certain side missions.  Liberating a burough is another way to build up the resistance, and you are rewarded with more highly specialized agents. Like the spy for instance, who comes equipped with a silenced pistol and a spy car that can cloak and fire missiles. Or the street artist, who has a paintball gun as her weapon of choice.

The new and best toy in your arsenal is going to be the spider bot! Sure, you can unlock a total of 24 different Tech options which range from Gadgets, Upgrades, Weapons and Hacks, but with the way the mission structure of many of the main story quests are done, you will be using the little bugger almost all the time. 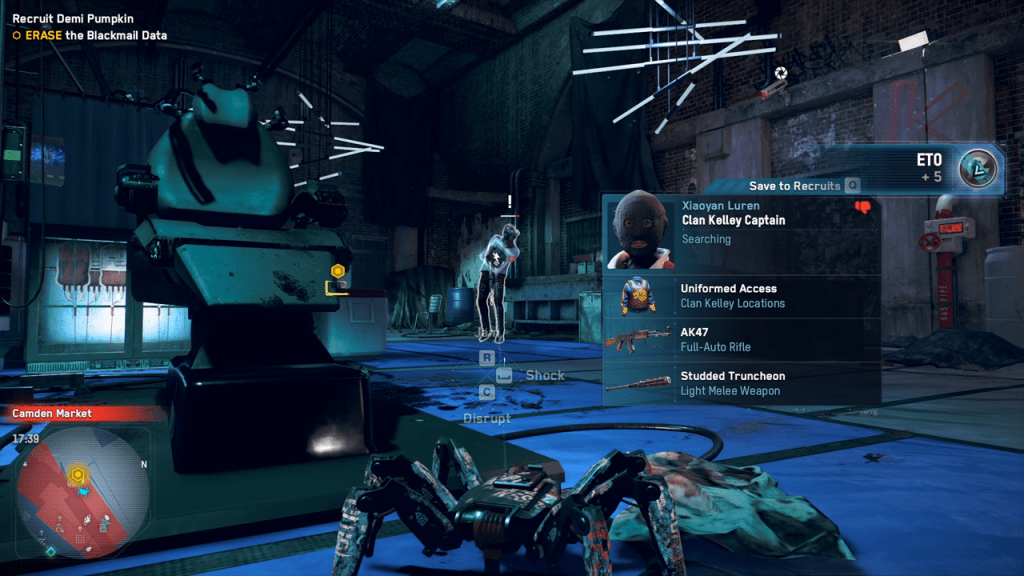 A typical mission begins with a briefing at HQ or with an NPC contact, and you are told to go to a certain spot and look for a server/laptop /hard drive, access its contents, and then escape. With the spider bot, rather than risking my operative’s life, I can send it in and have it do all the dirty work. What’s also convenient is that it can pick up collectibles for you as well. And if its detected or destroyed, you can just wait for the cool down timer and redeploy the bot. You can even upgrade it to have a double jump, sprint and even a cloaking ability. I feel that its so much fun to use, but it detracts any incentive of bringing any new agent that you may have recently recruited.

You earn Tech points when completing missions or as Tech collectibles found all over the city. You can spend it on new tech or upgrade ones you already have. Another helpful upgrade is the deep profiler, which makes it easier to recruit people who have a negative impression of DedSec. That is indicated by a red thumbs down in their profile. Non-lethal weapons can be unlocked and are useful for taking out drones, though you can hack them, there is a cool down when you disable or hijack them. 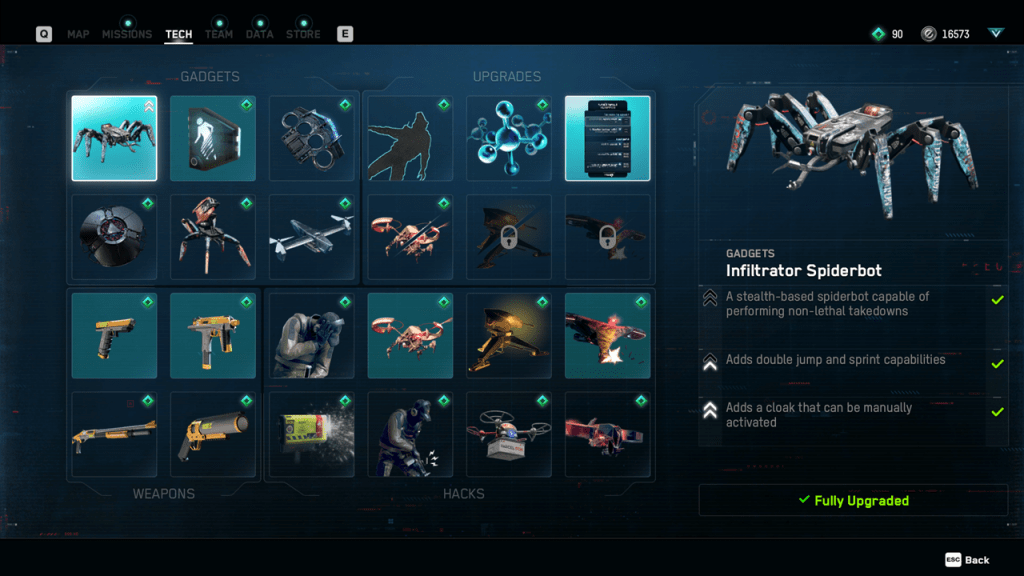 Combat in this game could use some work. The animations when brawling in the game looks stiff and janky. But the gunplay feels really solid and responsive at least. So if your familiar with some of the other third person shooters from Ubisoft’s library, you’ll feel right at home. Although there is not much in terms of choice when it comes to your weapons, as it is limited to a few assault rifles, SMGs, shotguns and pistols. There are also non-lethal variants of those weapons.

At the time of writing, the multiplayer or online component of the game was offline and had a tag stating “Coming Soon Launching in December 2020”, but that hasn’t stopped them from showing their microtransaction store in the single player which is mostly cosmetic. But it didn’t stop me from rolling my eyes every time I saw Aiden Pearce, the protagonist from the 1st game, locked behind the season pass.

While it’s nice to be able to recruit anybody in London, I would feel more invested if I could also make my own crew through more customization options. You also start to see the shortcuts the devs have done in trying to individualize each character once your roster starts to pile up.

With the way things are now, if you would like to visit the city of London, while not a 1:1 scale, London in Watch Dogs Legion is definitely represented well and it makes me wish I could take another trip there.

The Spider bot and gunplay are very much fun, but most the time you’ll be going through missions as though it were a puzzle, using the spider bot and other tech at your disposal for the easiest or safest resolution. Of course, going in guns blazing is still an option.

The mystery to find out the identity of the true villain may drive you to complete the game, but it feels as your companion AI Bagley is the only memorable character.

Watch Dogs Legion is a compelling game that tries to be ambitious with its millions of NPC characters but just doesn't push it far enough, which have been the similar pitfalls from previous entries in the series.Watch Dogs Legion Review | Welcome to DedSec