Bakugan: Champions of Vestroia Review | Collect Bakugans and be the Champ

To Brawl or to Roll? Your choice. 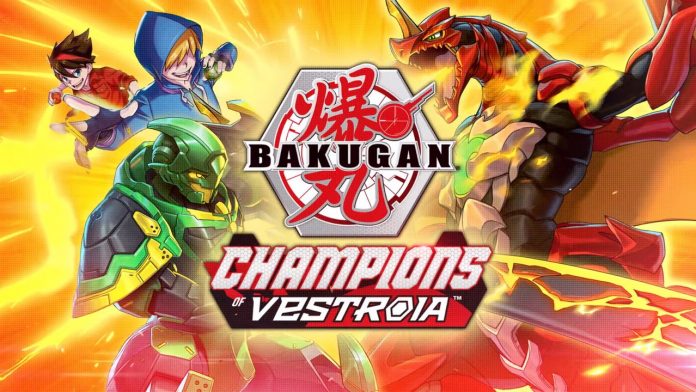 The early 2000s introduced us to a lot of toy lines that became part of our childhood, including the likes of Beyblade, YuGiOh, Crush Gear, Zoids, Super Yo-Yo, and even Tamiya mini 4WD. But perhaps the most obscure for me was Bakugan. Why obscure you ask? Collecting it is really cool, but I never actually learned how to play it. While I’m sure that I’m not alone on that case, Bakugan managed to have stable a fan base for many years before inevitably becoming just a sweet childhood memory.

But like Zoids who recently made a comeback, Bakugan won’t just be relegated to the history books as Bakugan returns with Bakugan: Battle Planet, a new anime series that started 2018 and with a second season that is still ongoing. With a rebooted series, it means that it comes with a new series of toys. Alongside the actual toys, series cretor Spin Master has released a new game in the series titled Bakugan: Champions of Vestroia. The question is, does Bakugan: Champions of Vestroia gives us enough reason to dust-off our transforming marbles to brawl out again? Or its just better to let this one roll over?

Like what was mentioned above, Bakugan: Champions of Vestroia’s world is based on the ongoing anime Bakugan: Battle Planet. Here we meet Dan Kouzo, leader of the Awesome Brawlers; though he is not the same Dan Kuso of Battle Brawlers who explains the whole tutorial of the game via Viewtube. So to make it clear, we won’t be playing as this Dan. Instead, we will be playing as a self-insert character who, by the looks of it, is the ace of the schools Soccer team. 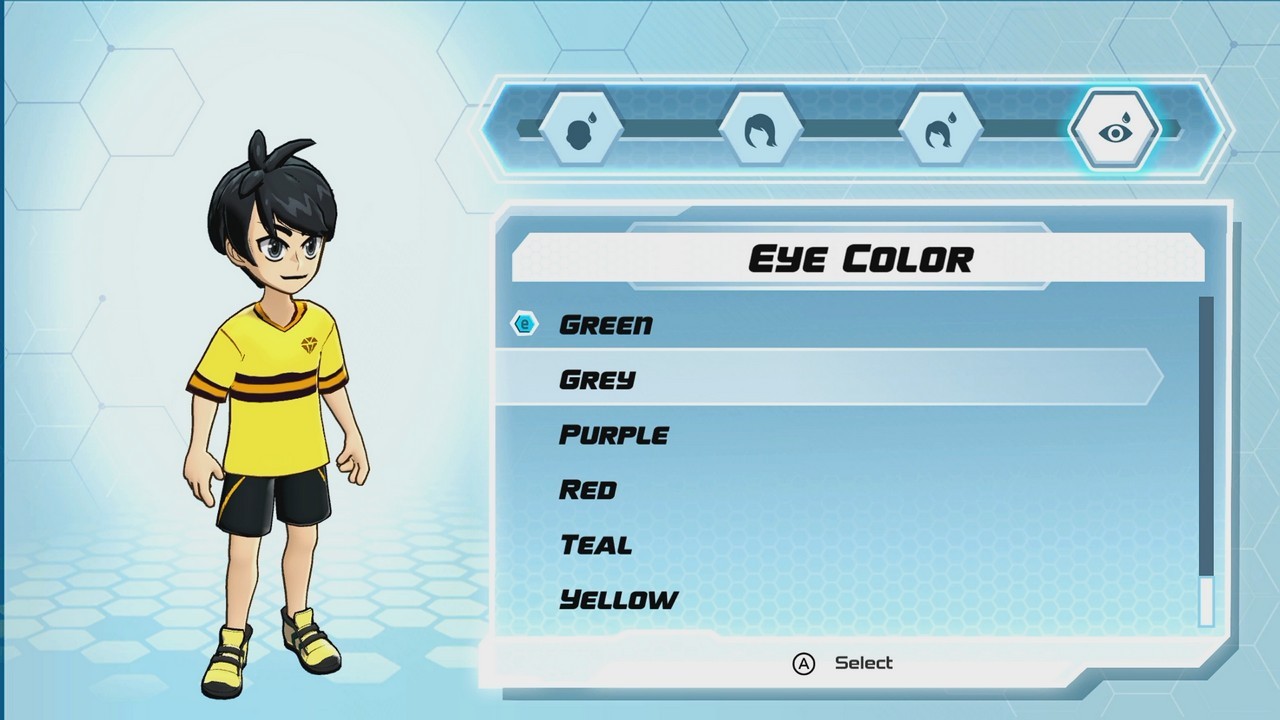 After losing the soccer match, everyone is still cheery because they had fun. So to celebrate and cool off, you and your friends decided to go the Secret Hideout to check out the new video of the Awesome Brawlers. But on your way to the hideout, you stumble upon a crater, and in its center lies a Bakugan that landed last night, which you suspect was the cause of the earthquake on the same night. Here, depending on your choice you can select your first Bakugan. What makes this Bakugan unique is it can talk and is ready to brawl. 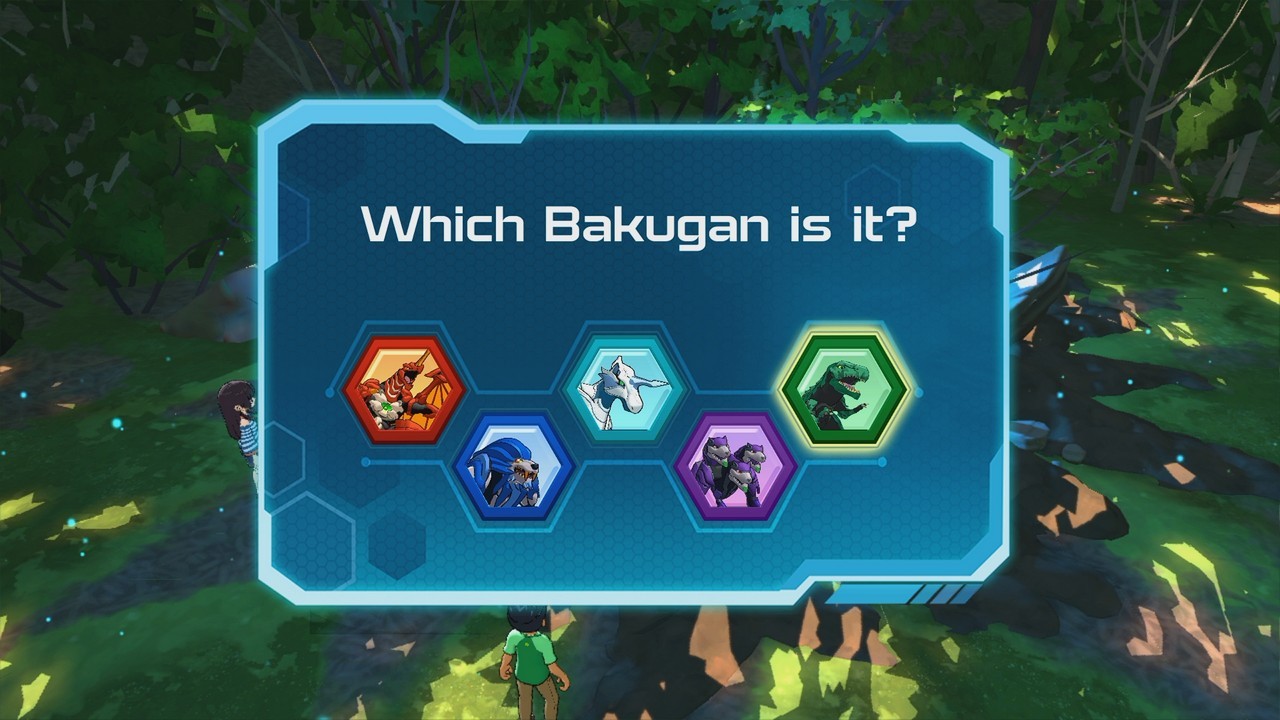 Upon getting your own Bakugan, your character aims to be the very best brawler out there, all while uncovering the mysteries revolving around the frequent earthquakes. What I can say about the whole pacing of the story is its all straight forward as it could be. Of course this is no surprise considering that the target audience are kids. The story only explains the vital mechanics of the game rather then the complicated stuff from the anime. Meaning most of your time is spent battling other brawlers instead learning why there are suddenly giant monsters appearing out of nowhere. While the story is decent enough to move things forward, if you are long time fan, you might find the whole thing lacking in depth.

Creatures not from this world

You can’t learn what’s behind the frequent earthquake without exploring San Barbaras (the game’s main world). As exciting as it sounds, exploration within San Barbaras is really lackluster as it is separated by different zones. Every time you load a new zone, it takes a bit of time (about half a minute to load). While not too bad, it’s definitely far from seamless. 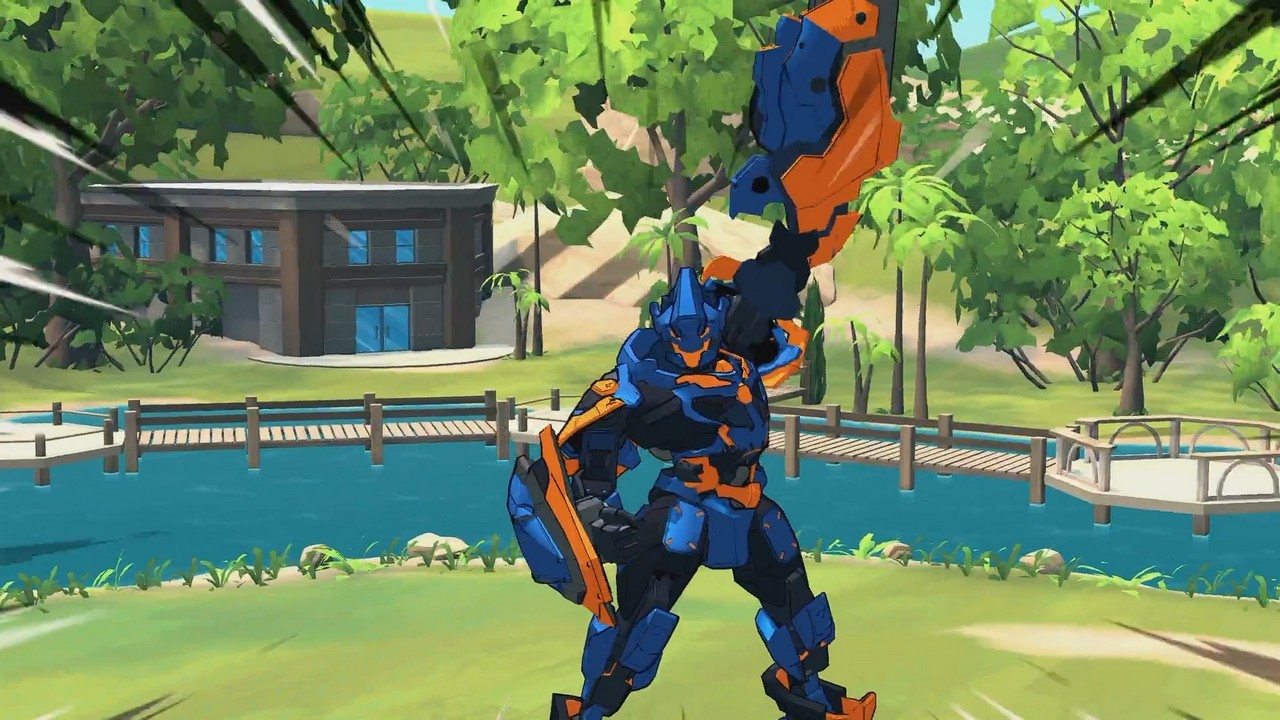 I mentioned above that I actually never fully learned how to play Bakugan in real life, and the only reason why I kept watching the first anime is because I had a massive crush on Alice and nothing else (don’t judge). Before, my idea of Bakugan is that in each battle, you and your opponent try to hit each other’s Bakugan by launching them and whoever has a higher power level wins. Results can be altered if your Bakugan lands on a card that is set around the playing field. Before I tried out Champions of Vestroia, I was actually expecting to finally play the tabletop game, but in video game form. 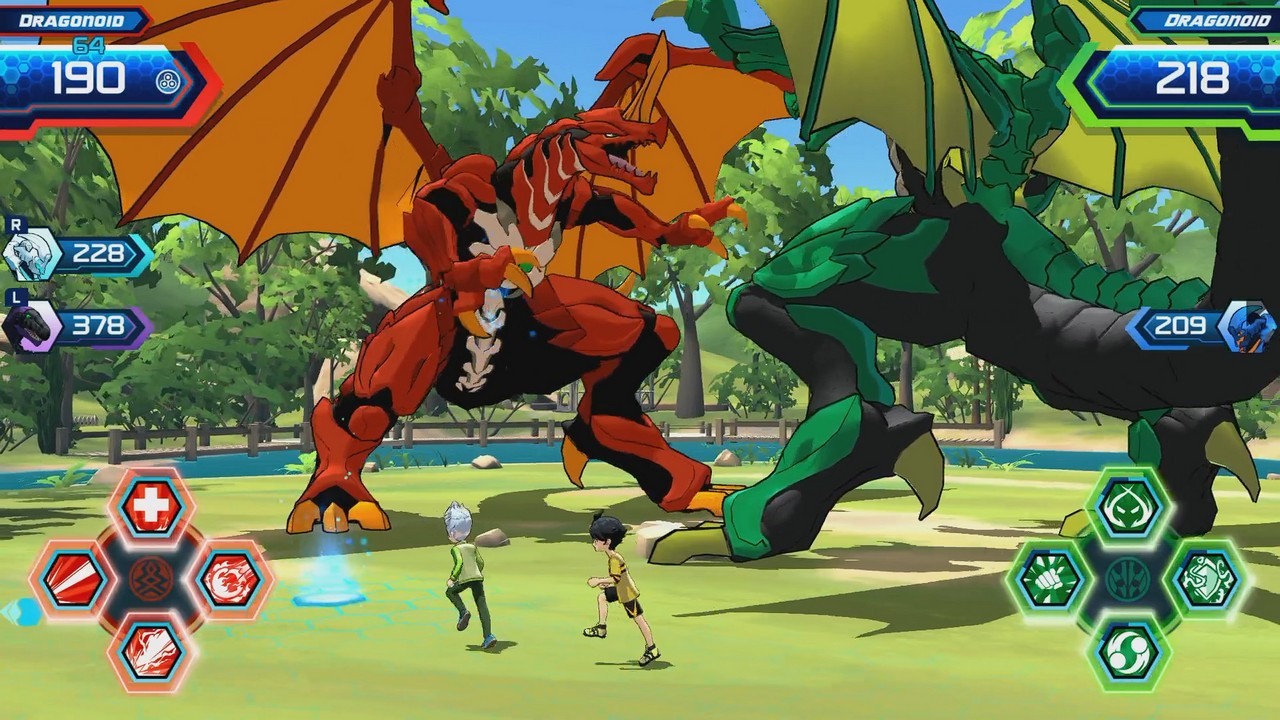 In my surprise, Bakugan: Champions of Vestroia’s gameplay is different from what I was expecting. Instead, it’s reminiscent of a turn-based RPG where your transformed Bakugan battles in the background. Equipped with 4 moves, you choose which action your Bakugan would take, whether you want them to apply a boost on their stats, or a debuff to the opposing Bakugan, or just outright deal damage to them by using an attack skill. The catch in this brawl is that both Bakugans won’t be able to do any actions unless their owners pick up a energy core that lies around the whole field. This makes battles a race where the player who gets energy cores faster can charge their Bakugan’s energy to move.

Not the actual gameplay I was expecting, but I gotta admit that Champions of Vestroia’s battle system is interesting. As you try to strategize in battles, you have to consider the unique interactions of each Bakugan factions. All while racing for energy cores in actual combat. You also have to build the appropriate abilities of your team. Unfortunately, even if the gameplay is fun and interesting at first, every battle feels the same and becomes a chore, especially when you encounter a brawler with a full team of 3.

The battle system showed potential as it tried to mix turn based battle and real time action at the same time. Unfortunately, it gets old too soon and becomes a drag in later parts of the game. What saddens me even more is that online battles often feel the same as the single player mode. Maybe Wayforward could have saved Champions of Vestroia if they only made a faithful adaptation of the new anime rather than making a different storyline. 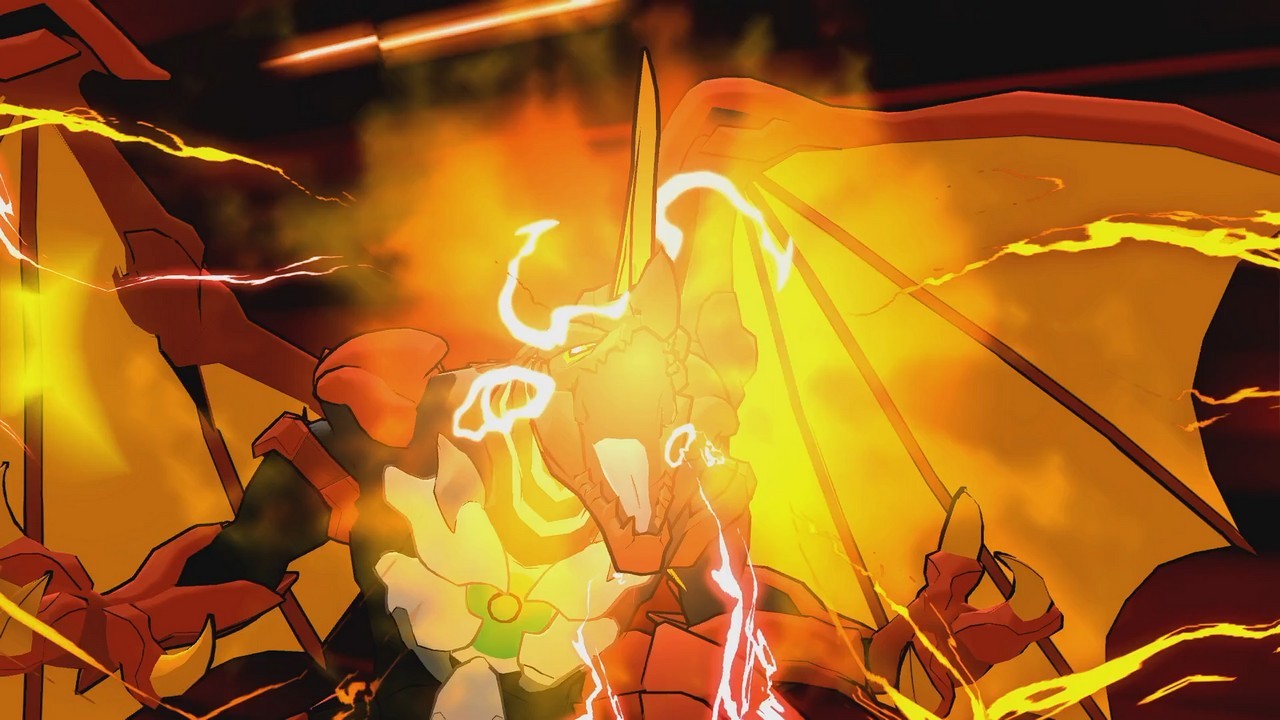 So overall, Bakugan: Champions of Vestroia managed to have a straight forward gameplay that might charm kids of a certain age. But the game may lack appeal to long time fans with its generic storyline and a world design that feels it was taken from a DS game.

If you want to introduce a kid to the world of Bakugan, then this game is a decent place to start for them. And if you’re a Bakugan fan, this game is worth a look. But if you’re looking for an RPG where you collect various creatures and battle with them, Bakugan: Champions of Vestroia may not offer enough to satisfy.

Kids who are just getting into Bakugan might find Bakugan: Champions of Vestroia a good point to start to the franchise. But for long time fans of the series, they might not feel in home in this new Bakugan game as the combat, while interesting, feel same-y and old after a while. Bakugan: Champions of Vestroia Review | Collect Bakugans and be the Champ