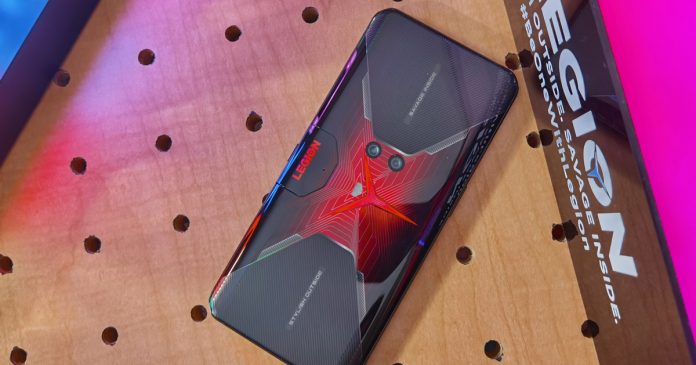 While we could all agree that 2020 hasn’t been the best year, it did see a lot of interesting new gaming tech. This is the year we got next gen consoles, powerful new processors and graphic cards, and even a rise in dedicated gaming smartphones. Stepping up to the plate is Lenovo Legion’s foray into the world of mobile phones — the Lenovo Legion Phone Duel.

Extending their expertise in gaming, esports and streaming, the guys from Lenovo Legion added new innovations rather than just stuffing a smartphone with the most powerful specs to date. 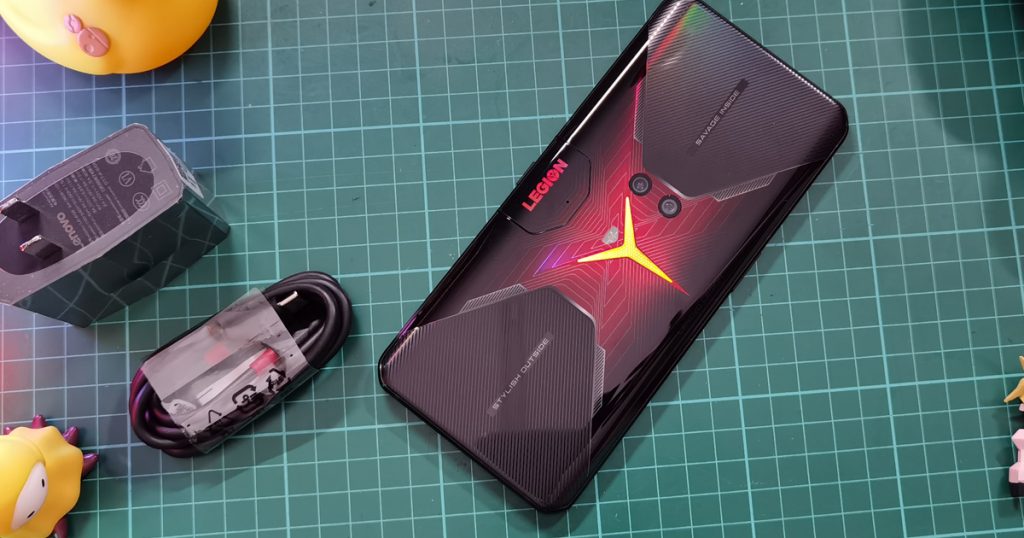 Here’s our full review of a good initial offering from Lenovo Legion!

There’s no getting around it, the Lenovo Legion Phone Duel is massive! It’s big, bold, chunky and has all the “gamer-markings” to turn heads – including a lighting RGB logo at the case to boot. In most cases we’re actually fine with this, however, the design might be bit too much for users who prefer a more subtle device. 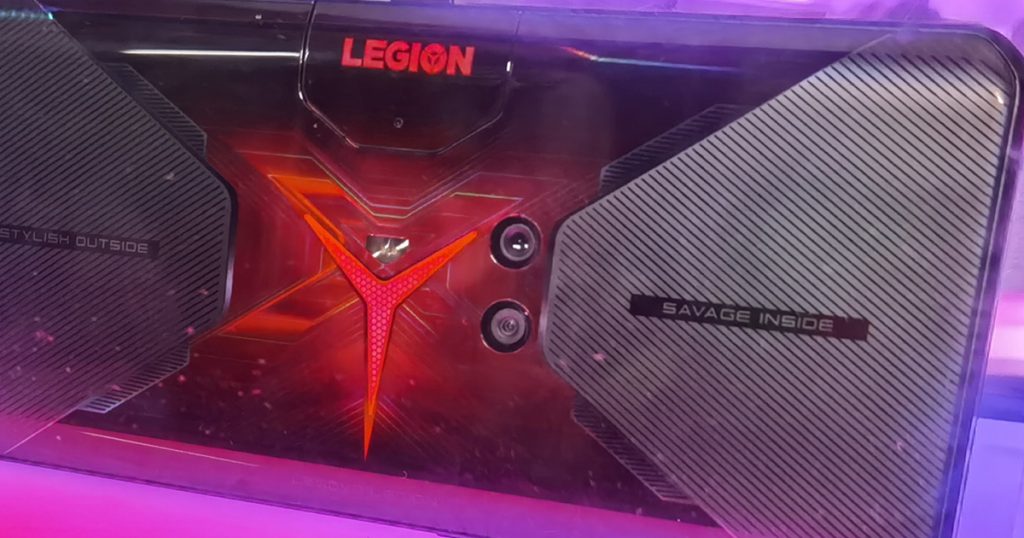 To start off, the Lenovo Legion Phone Duel’s rear cover has a bright red or blue color motif (depending on what variant you got), with a beautiful carbon fiber-like pattern that ties everything together. At the center sits the Lenovo Legion’s logo that lights up to whatever color you want to program it.

When you flip the phone over, you’re greeted with a gorgeous 6.65” AMOLED display. The side bezel reflects the color of the Lenovo Legion Phone Duel phone variant you got: red for Vengeance Red and blue for Blazing Blue colorway.

But the colored side bezels really reveal how blocky the unit is. 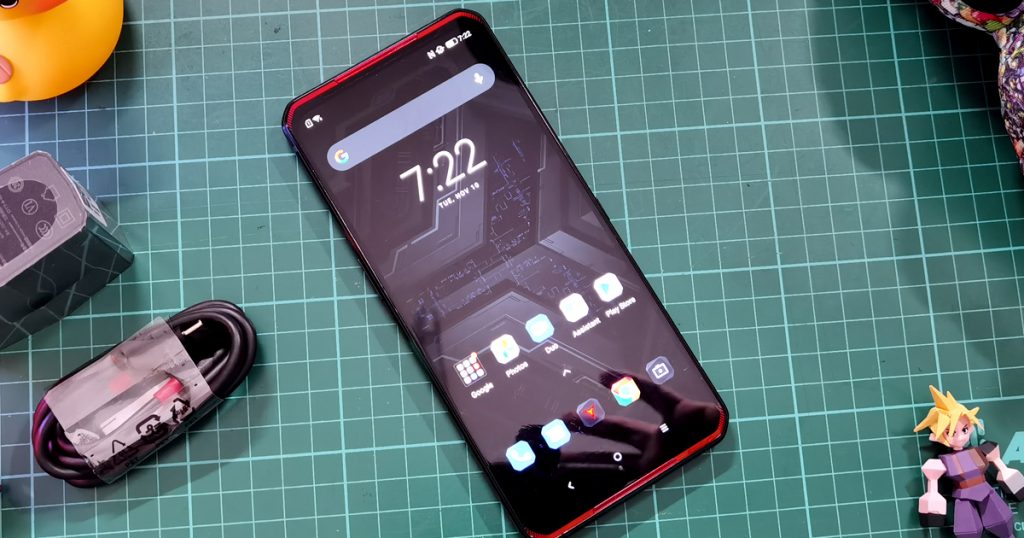 Design-wise, the angular aesthetic of the Lenovo Legion Phone Duel is stylish sure, but I wish they would have scaled back a bit on the obvious “gaming” design and stick to more sleek lines. At least that would allude to the design ethos of Lenovo of keeping things “Stylish on the outside, savage on the inside.” 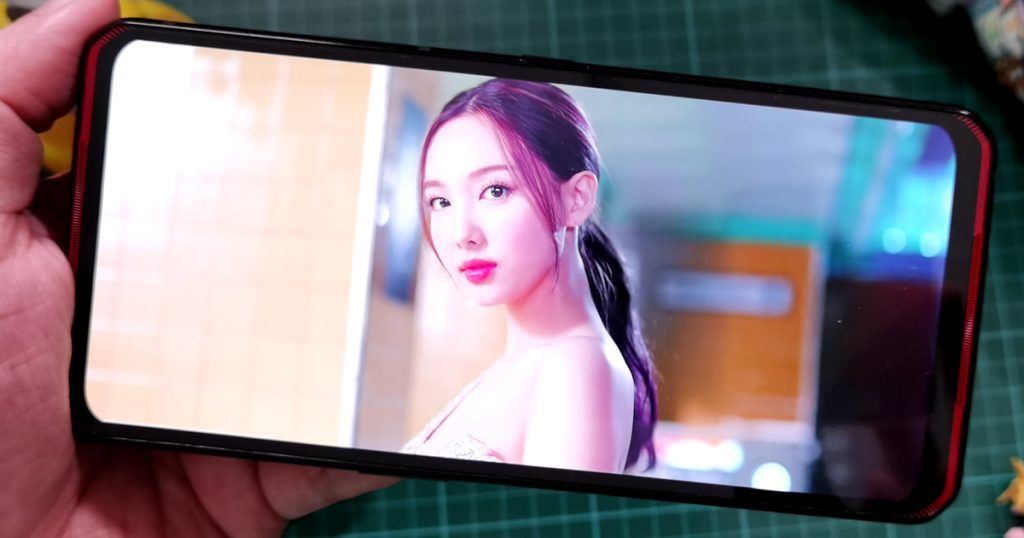 That being said, the actual performance of the Lenovo Legion Phone Duel is nothing short of enjoyable. Take binging on your favorite entertainment media; watching on a beautiful 6.65” FHD+ AMOLED display without any notches seen is a great experience. As you can see, there are no punch-hole notches or drop down notches here on the Lenovo Legion Phone Duel. So, where did they hide the selfie, camera? Well, that’s one of the innovations that the phone brings which we’ll go into more detail in a bit. 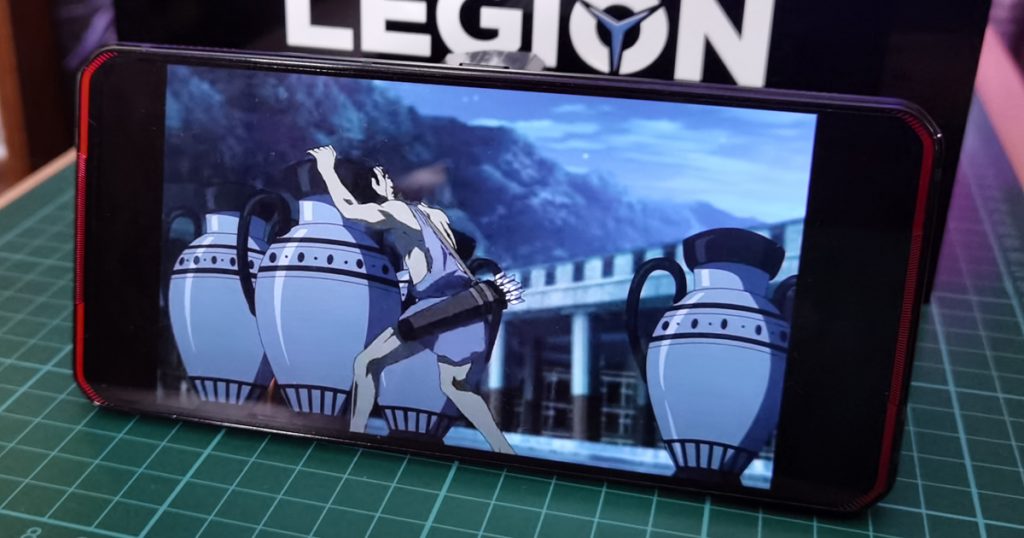 As for audio, the Lenovo Legion Phone Duel has 2 powerful front-facing speakers which give you full immersion, whatever it is you’re watching.

The Lenovo Legion Phone Duel is powered by Qualcomm’s most powerful chipset so far, the Qualcomm Snapdragon 865+. Add the 12GB or 16GB of RAM, and you’re pretty much set for whatever game you throw at this – even at max settings! 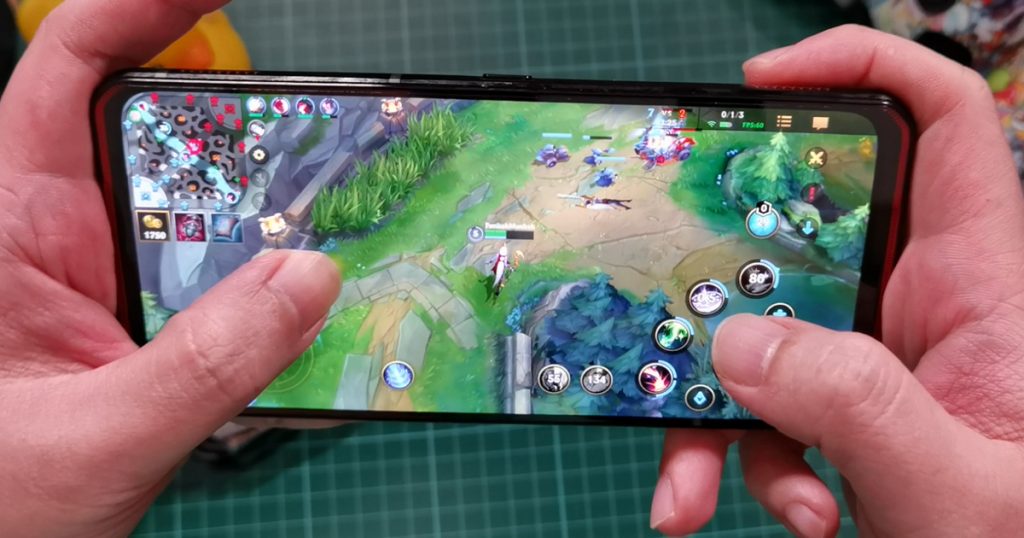 As a gaming phone, the display isn’t only crystal clear, the 6.65” FHD+ AMOLED display also has up to a 144Hz of refresh rate (with a 240Hz touch sampling rate). We tried a couple of games on it and we haven’t found any instance when the game slowed down. 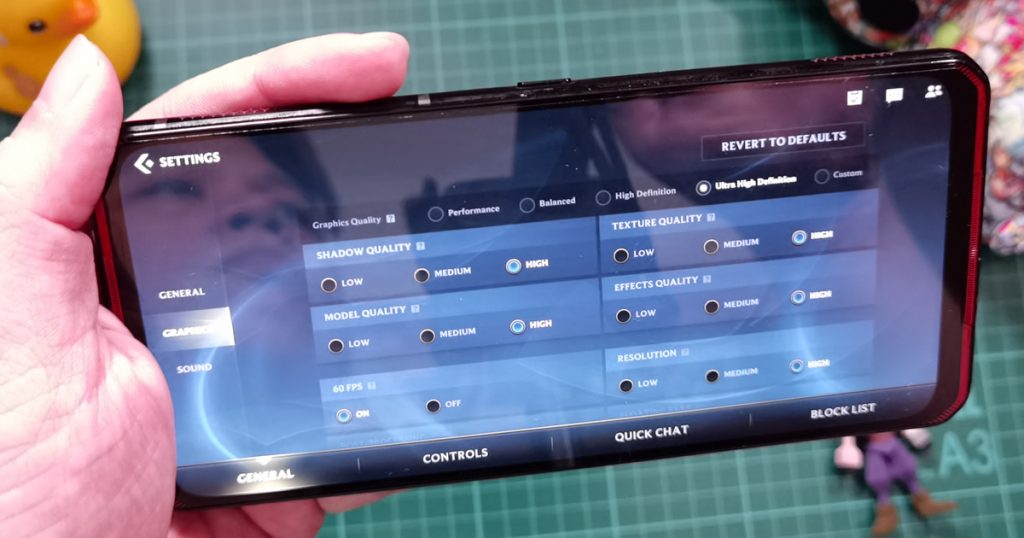 If you want to boost power, simply click the Rampage mode in the phone’s Game UI HUD. This simple Game Mode HUD is one of the best streamlined game menu on a mobile phone as well. It’s simple, intuitive, and highly optimized, something that I truly appreciate with the phone. 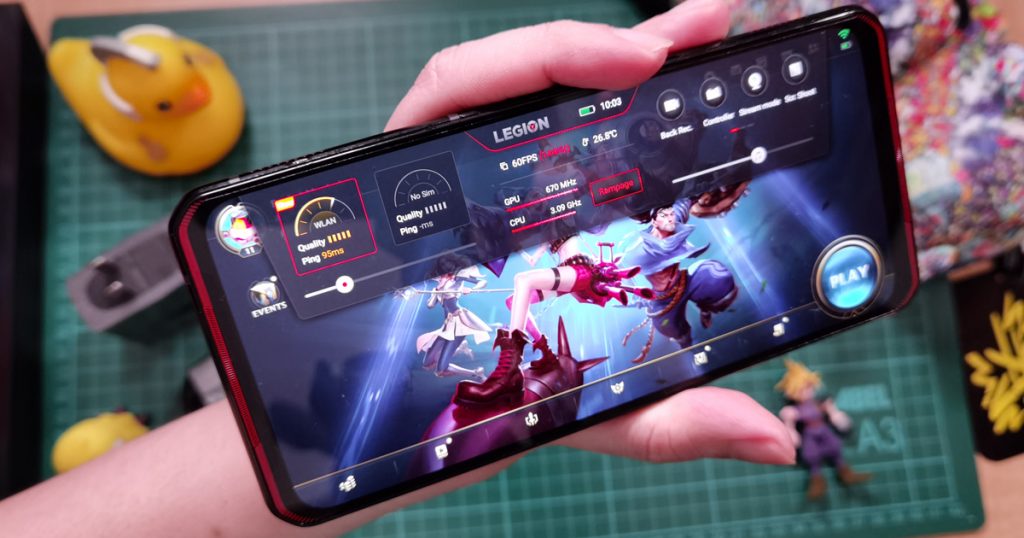 The menu also gives you quick access to various toggles like volume, screen brightness and options like going on live streaming mode and even capturing clip highlights.

Speaking of optimization, remember that lack of any front-facing camera notch on the display? It’s because the front-facing camera is found on a side-mounted pop-up camera that conveniently sits on top of your phone when you’re playing in landscape mode. This, innovation makes it easy for you to stream your game and your reaction at the same time.

While the placement of camera there is unique, it is a bit awkward when taking vertical selfies. So we have to give Lenovo Legion credit for this design decision. 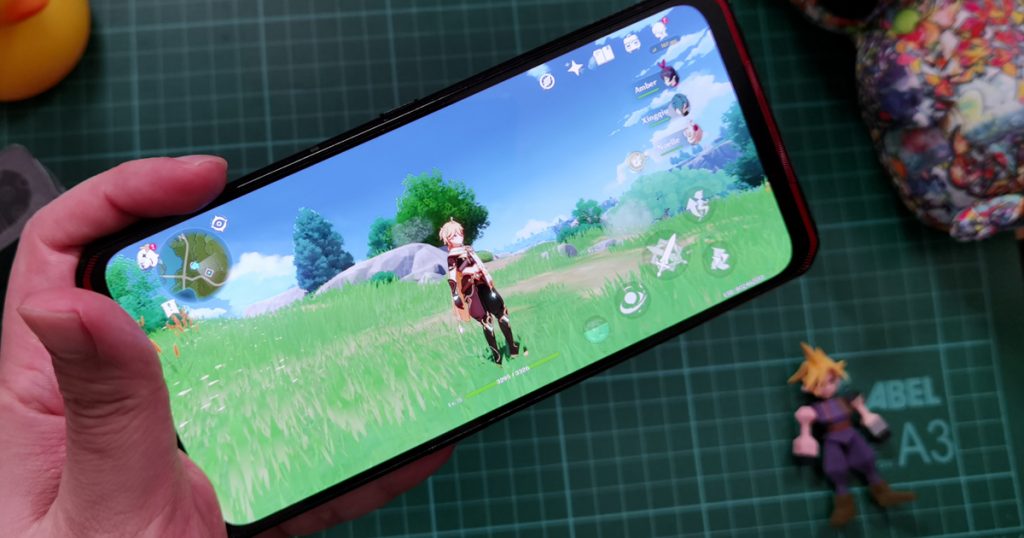 Overall, gaming with the Lenovo Legion Phone Duel, especially with the Rampage mode on, is a treat!

Here are a couple of photos taken with using the Lenovo Legion Phone Duel’s rear camera:

For those who love to take selfies, the Lenovo Legion Phone Duel has an unusual but innovative implementation of the pop-up camera module found towards the side of your phone. 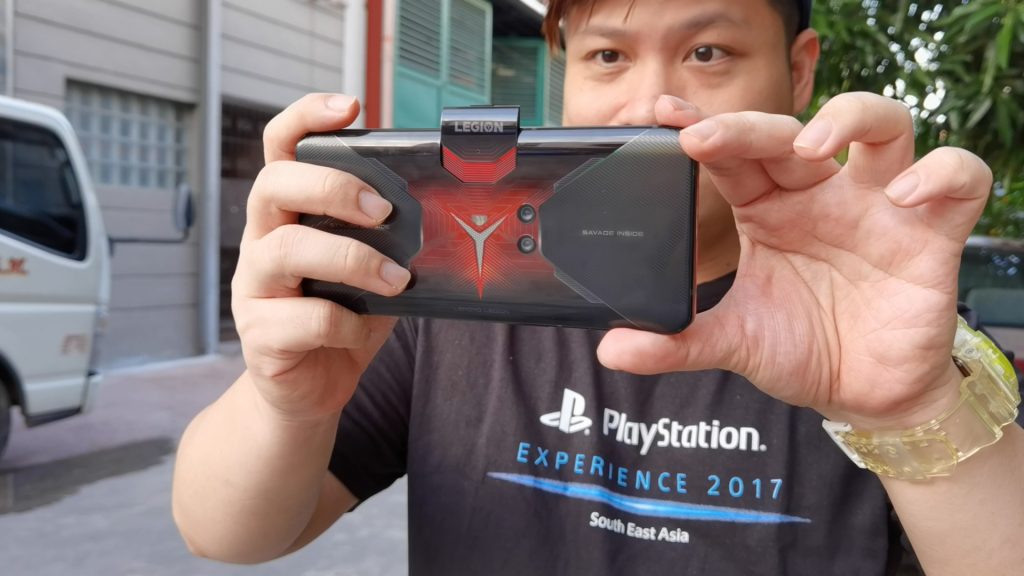 This 20MP F/2.2 front-facing camera is decent by every right.

Here are some samples:

The Lenovo Legion Phone Duel produces clear, crisp images, however, we wished the default setting of the AI Beautification could be tempered down a bit. For video, however, this front-facing camera sits just right and gives off clear images when you do decide to stream.

The Lenovo Legion Phone Duel sports a battery capacity of 5000mAh, and it features 2 USB Type C ports along with a charging brick that’s the biggest we’ve seen in any smartphone device. Thanks to this, the phone lets you game for hours on end. 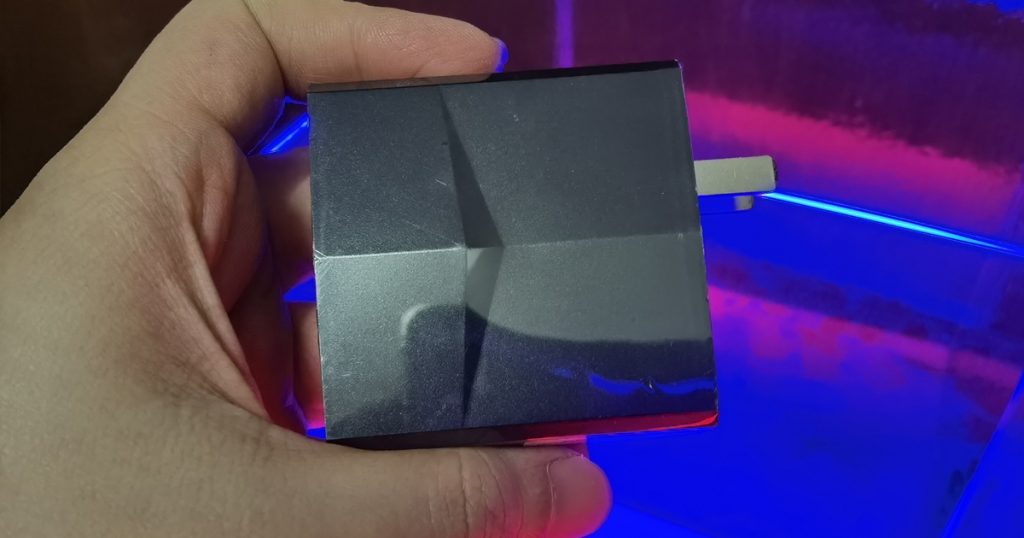 The dual port USB charging block can charge your phone from 0 to 100% in less than an hour because of its 65W Turbo Fast Charging. That’s insanely fast! 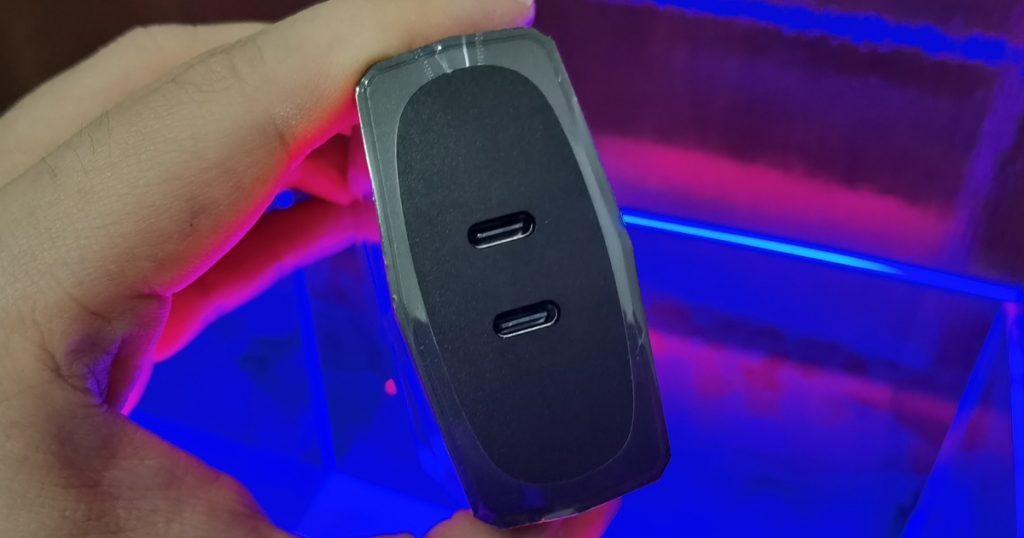 Even at heavy use, a 5000mAh could last you pretty much the entire day, but as always, if you need more juice, that 65W Turbo Fast Charger comes in handy. To activate that speed, however, you’ll need a spare Type C cord and plug both cords at the same time. Even without one though, the Lenovo Phone Duel charges pretty quickly still at 33W. Not bad. 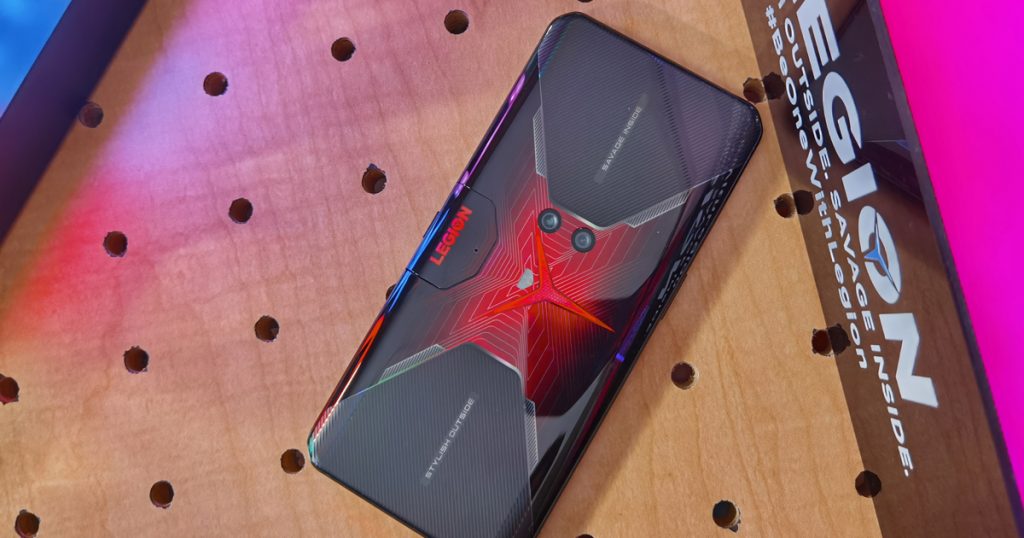 The Lenovo Legion Phone Duel retails for Php 39,995 for the Blazing Blue variant which has a 12GB RAM/ 256GB Internal Storage configuration and Php 49,995 for the Vengeance Red which has a whopping 16GB RAM and 512GB of internal storage. While you will need to shell out a pretty penny for these bad boys, they are far more affordable than the direct competition.

Do we recommend it? If you’re looking for a unique flagship phone that will definitely turn heads, then the answer is yes. While we would have loved to have the photo capability to be at par with some of the other flagships out there, the main objective of this phone is to game – and game a lot, and it does so incredibly well!