These retro-inspired sneakers are releasing in December! 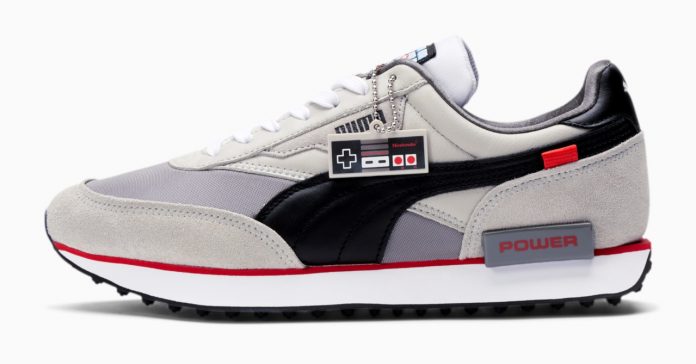 Last month, Puma unveiled its Super Mario 3D All-Stars sneaker lineup. Now, Puma has revealed another sneaker in its Nintendo lineup, this time the sneaker is inspired by the iconic Nintendo Entertainment System! Specifically, Puma NES shoe is based on the Future Rider silhouette.

The Puma Future Rider NES features a cream and grey colorway with red accents, a color combination inspired by the iconic Nintendo home console. The sneaker also features a Power button design near the midsole, as well as a tag that’s shaped like an NES controller. The Future Rider NES also has the classic cover art for the original Mario Bros on the tongue. Finally, the sneaker’s insole features artwork that is based on Bowser’s original castle.

This new sneaker from Puma is part of the brand’s collaboration with Nintendo that celebrates the 35th anniversary of the Super Mario franchise. The other sneakers in the collab include pairs that are inspired by: Super Mario 64, Super Mario Sunshine, and Super Mario Galaxy.

The Puma Future Rider NES will release in the US on December 4, 2020 for USD 90. The sneaker will be available via the official Puma webstore.

Currently, there’s no word yet on if the Puma Future Rider NES will release in the Philippines.