Sackboy: A Big Adventure Review | A Sack-Load of Charm

Sackboy's jump to 3D is a success! 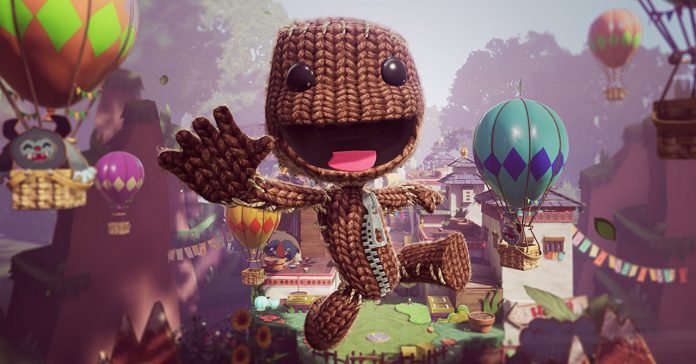 While the mainline games in the LittleBigPlanet series featured fun 2.5D platformer action, they arguably had a bigger focus on user-generated content. Sure, the campaigns were fun, but LittleBigPlanet’s identity is tightly linked to its level editor and the subsequent user-made levels that players were able to enjoy. But with the release of Dreams earlier this year, the future for the LittleBigPlanet series became a bit unclear; after all, Dreams being a full-blown game creator is pretty much an evolution of developer Media Molecule’s vision in LittleBigPlanet.

Though we didn’t have to wait too long to find out what Sony has in store for the series as back in June, Sackboy: A Big Adventure was announced for the PS5 (and subsequently for the PS4). Developed by Sumo Digital, the creators of LittleBigPlanet 3, ‘Sackboy’ is a spin-off of the series that lacks a level editor, but instead features a 3D platforming adventure.

Making the jump to 3D

There have been several LittleBigPlanet games, though Sackboy: A Big Adventure is the first 3D platformer in the series. And in terms of structure, the game shares similarities with Super Mario 3D World in that players journey through various worlds with different levels where they must gather collectibles – in this case ‘Dreamer Orbs.’ Before the end of each world, players must collect a certain number of orbs before being able to progress. 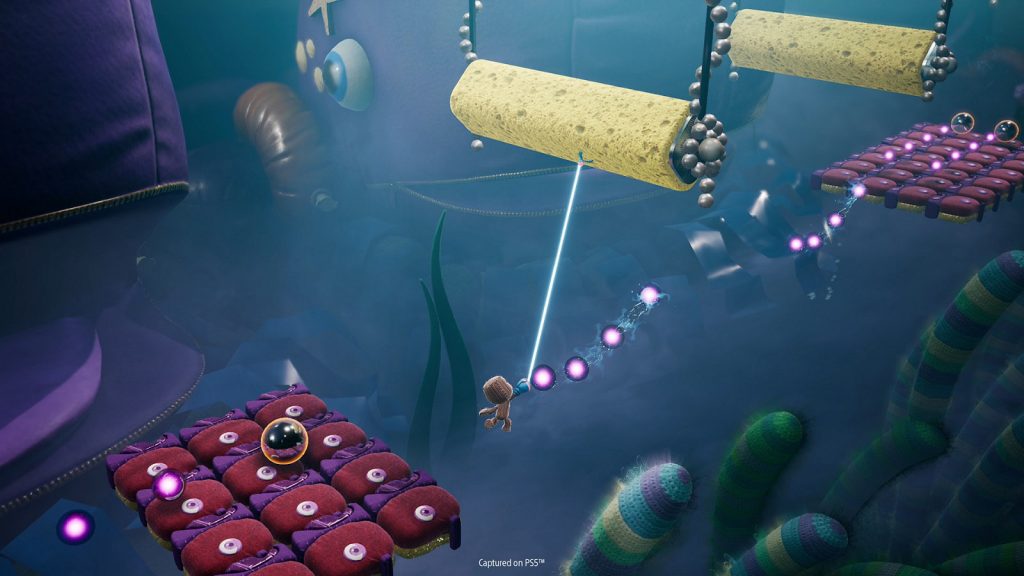 As for its levels, the game is sort of like a cross between a 3D Mario game and Crash Bandicoot in that most levels feature unique gimmicks such as grappling hooks and boosters, while others require players to defeat bosses. These, along with the various enemies that players must face make each level feel unique and fun, and at no point in my 10-hour playthrough of the game did I get tired of it. Though make no mistake, while the flow and design of the levels are reminiscent of Crash Bandicoot, the game is not that difficult. While some of the later levels do pose a challenge, I finished the game without having to re-do a level more than once; and that’s speaking as someone who isn’t that good with platformers!

Speaking of finishing the game, while it only takes around 10 hours or so to complete the story, Sackboy does have a lot more content to offer. Not only can players replay levels to grab every collectible, the game also features time trials, remix, secret levels, and a bonus world. In all, the game should provide around 15 or so hours of gameplay; much more if you’re a completionist or are planning to play the game in co-op mode.

Having fun levels and a good amount of content is great and all, but how does Sackboy feel to control? For starters, there is a bit of floatiness to Sackboy’s movement, but given that levels don’t exactly require pinpoint accuracy when jumping between platforms, this is not at all a problem. In fact, Sackboy feels nice and natural to control, and at no point did the feel of the game frustrate me.

With the jump to 3D though, Sackboy lost the level editor, a key part of the LittleBigPlanet experience. Personally, I’m fine with not having a level editor as it meant the developers were able to focus on creating a better story mode. Of course, fans who loved creating levels in the original may find the experience lacking a bit, but the strength of Sackboy’s 3D platforming gameplay should be more than enough to offset this.

Overall, Sackboy’s gameplay may not be exceptional or bring anything new to the table, but it does offer fun 3D platforming action that should satisfy most gamers, even someone that’s not too into platformers like myself.

As for its story, the game follows Sackboy who must rescue his fellow Sackpeople after they are kidnapped by the evil Vex, a being “born of chaos and fear.” In his journey to help save his friends along with the whole of Craftworld, Sackboy must traverse various obstacles in various worlds, including snowy mountains, thick jungles, and even interstellar colonies.

I have to say, the story of Sackboy isn’t exactly noteworthy, but it’s a cute tale that moves the game along well enough. Though this shouldn’t come as a surprise; after all, platformers aren’t exactly story-heavy games.

More than the story though, the world of Sackboy is THE reason to play through the story. By that, I don’t just mean that the levels are fun to play; they’re also filled to the brim with charm. Whether dodging rolling Yetis in snowy levels or collecting monkeys in leafy jungles, Sackboy’s world is just a joy to play through. 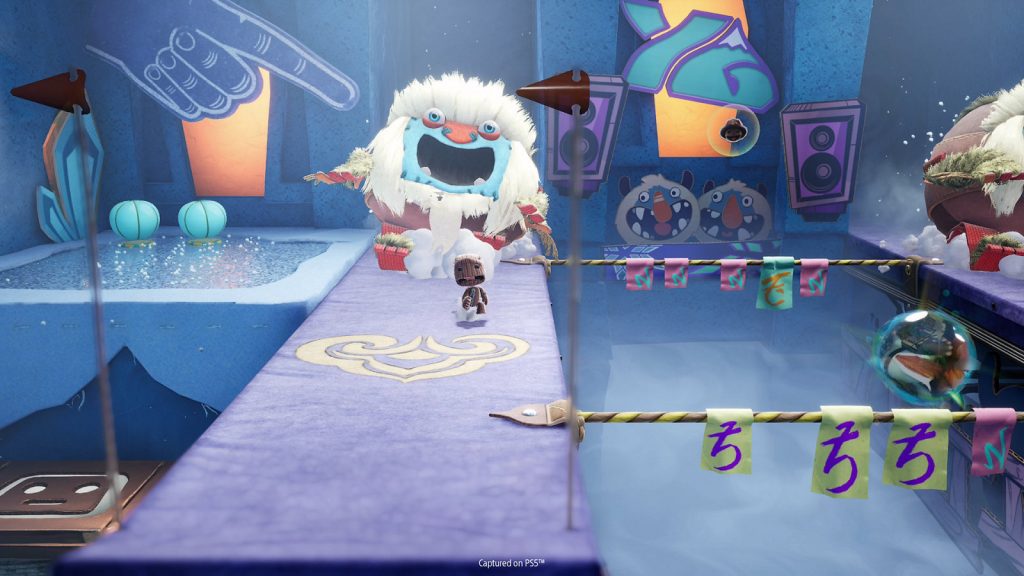 What helps the variety of lovingly crafted worlds in Sackboy pop out is the game’s great graphics. While the PS5 version of the game will no doubt provide the best experience, the PS4 version (which we played for this review) still has good graphics and a smooth framerate. Sure, you won’t get the PS5’s higher resolution and DualSense features, but Sackboy is still an adventure worth taking on the PS4 in terms of performance.

Complementing the game’s charming visuals is an equally lovely soundtrack. The game’s music is composed of original tracks made just for the game that fit the game well, along with several pop songs including the likes of Let’s Dance by David Bowie and Uptown Funk by Mark Ronson & Bruno Mars.

Having licensed music isn’t new to the LittleBigPlanet series, but the other games in the series didn’t use pop songs such as the ones in Sackboy. Though for some reason, they worked incredibly well in the levels they are used in as the platforming segments are made to be in rhythm with the music.

Couch Co-Op is a Blast 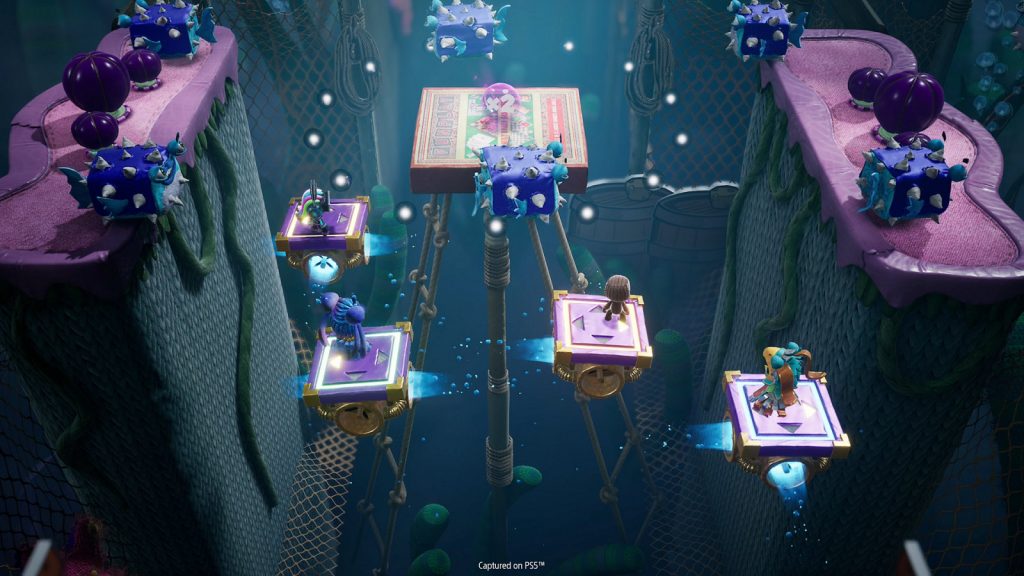 The story of Sackboy: A Big Adventure can be completed with up to four friends via couch co-op or online play (the latter will be added in a later update). Playing with friends can be quite chaotic, but it’s definitely a lot of fun, so much so that I’d recommend playing through the whole game with a friend or two (or three) if possible.

In my time with the game, I was only able to try out local co-op as online multiplayer for Sackboy is not yet available. The lack of online play can be a bummer for people who don’t have people to play with locally (because of social distancing or any other reason), but at least it’s confirmed that online multiplayer will release very soon, and it will support PS4 and PS5 cross-play.

Sure, it may not have the level editor of LittleBigPlanet, nor does it really bring anything new to the table as a platformer, but what Sackboy does have is charm by the sack-load. Not only does it have a lovingly crafted world and a great soundtrack, its 3D platforming gameplay is also nice and satisfying to play. And to top it all off, Sackboy: A Big Adventure is an excellent couch co-op game with friends and family.

Whether you just bought a PS5 or are still on the PS4, Sackboy: A Big Adventure is defintely a game that’s worth checking out. And if you do play it, make sure to bring some friends along for the adventure!

*This game was reviewed using a PlayStation 4 Slim via a review copy sent by Sony Interactive Entertainment Singapore.

Sackboy: A Big Adventure is a charming 3D platformer that features a lovely world, a great soundtrack, and an excellent couch co-op mode. While it may not have a level editor nor is it exactly innovative, the fun 3D platforming gameplay and great levels make it well worth considering, both on the PS5 and the PS4. Sackboy: A Big Adventure Review | A Sack-Load of Charm