It looks like the third BNHA movie will center on Deku, Bakugo, and Todoroki! 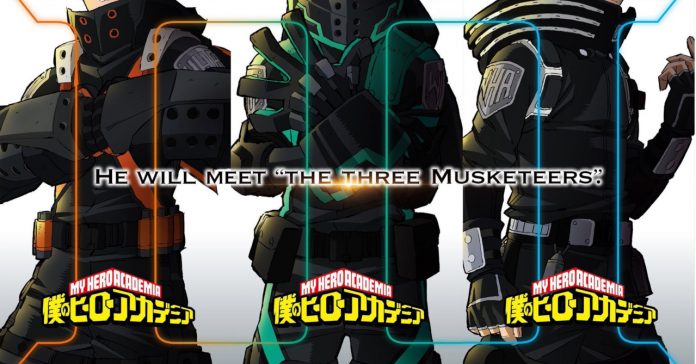 The official My Hero Academia anime series, movie, and manga Twitter pages recently released Tweets that tease the upcoming movie. Each page Tweeted a teaser, which when combined, also spell out the phrase “HE WILL MEET ”THE THREE MUSKETEERS”. Aside from this phrase, each tweet also links to different My Hero Academia pages which feature one image each. When combined, the images form a new key visual featuring Deku, Bakugo, and Todoroki.

My Hero Academia Movie 3 has been announced with a Key Visual https://t.co/g1rctvd1M9 pic.twitter.com/Tjc5zW7Dub

Aside from the new key visual, we have no word yet on what the story of the third My Hero Academia movie will be. Though given the Three Musketeers reference, we expect that the film will center on Deku, Bakugo, and Todoroki as they team up to face off against a powerful enemy. The third movie featuring the three heroes also makes sense as the first film mostly featured Deku, while the second had Deku and Bakugo sharing the spotlight.

- Advertisement -
Previous article
Is the PS5 worth it in the Philippines?
Next article
Perfect World VNG adds the new Assassin Class – here’s why it’s a game changer