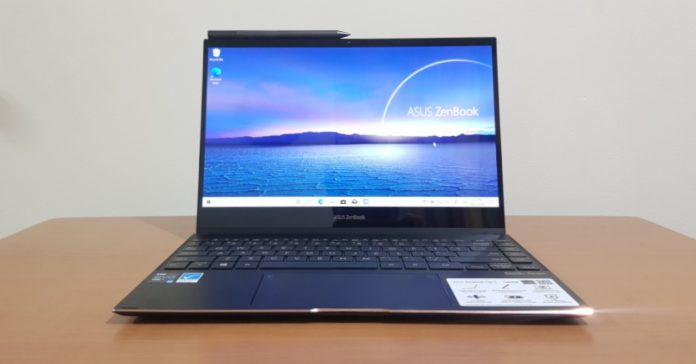 Launched in the Philippines earlier this month, the ZenBook Flip S UX371E is one of the newest premium laptop offerings from ASUS. While there have been a couple of premium ZenBooks that were released fairly recently, the Flip S stands out for its convertible form-factor, as well as top-end features which include a 4K touch display and an 11th gen Intel Core processor. 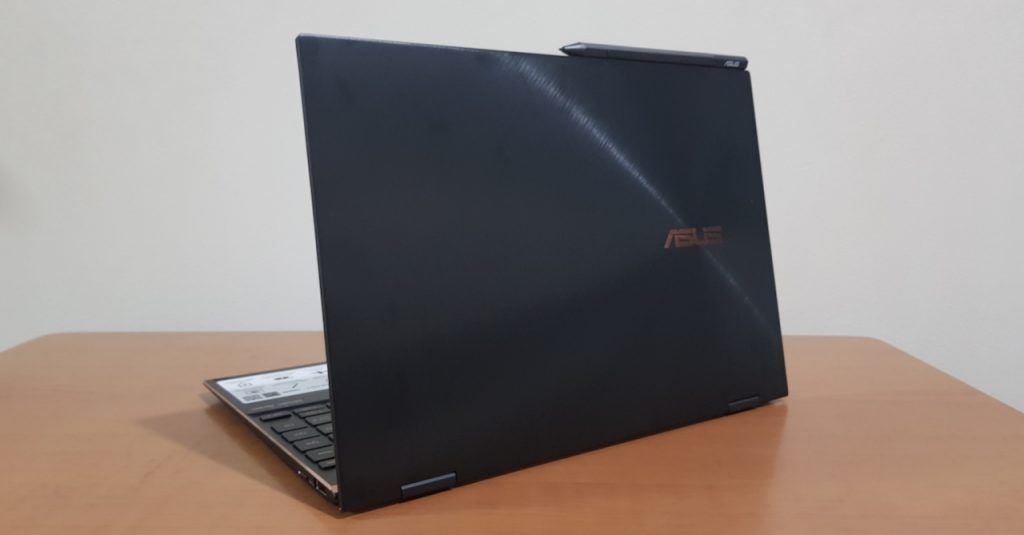 In our first impressions of the ZenBook Flip S UX371E, we found it to be quite a promising laptop, especially for creatives who can make full use of its convertible design and touch display. Of course, that’s based only on a couple of days with the laptop.

Now that we’ve tested the laptop for a couple of weeks, we can finally give our full verdict. So is the new Flip S a worthy laptop option? Find out here in our full review! 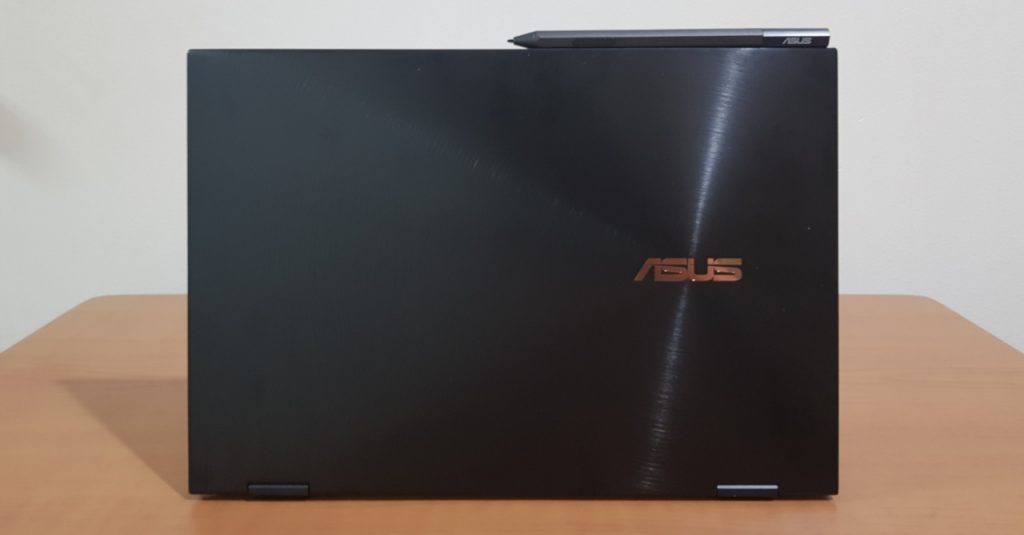 As we’ve noted in our first impressions, the ZenBook Flip S features the signature concentric circle design. This, along with the laptop’s brushed metal finish on the cover makes it a laptop that definitely looks and feels premium. While the visible hinges does make it less sleek than other ZenBooks, it’s still a good-looking notebook. 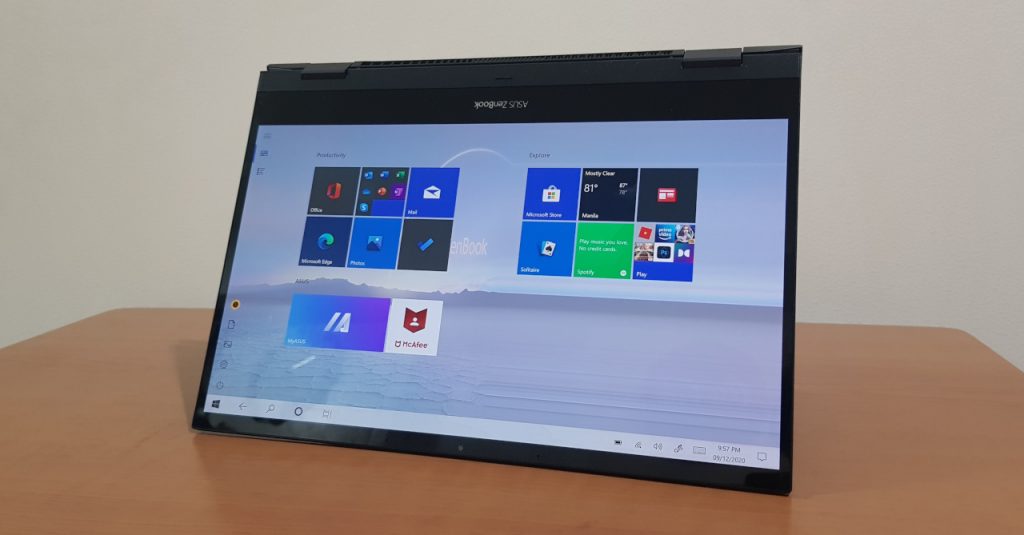 Aside from looking good, the ZenBook Flip S is also well-built. This means users won’t have to be too careful when converting the Flip S from a notebook to a tablet; great news for users who plan to use the ZenBook’s convertible design to its fullest. To top it all off, the Flip S is thin and light, making it incredibly portable.

For I/O, the Flip S has 2 x Thunderbolt 4 USB Type-C, 1x USB 3.2 Type-A, and 1 x HDMI 2.0 ports. While 2 Type-C ports is a welcome feature, an additional Type-A port or two would have been nice, especially if you want to use a wired mouse or another peripheral. 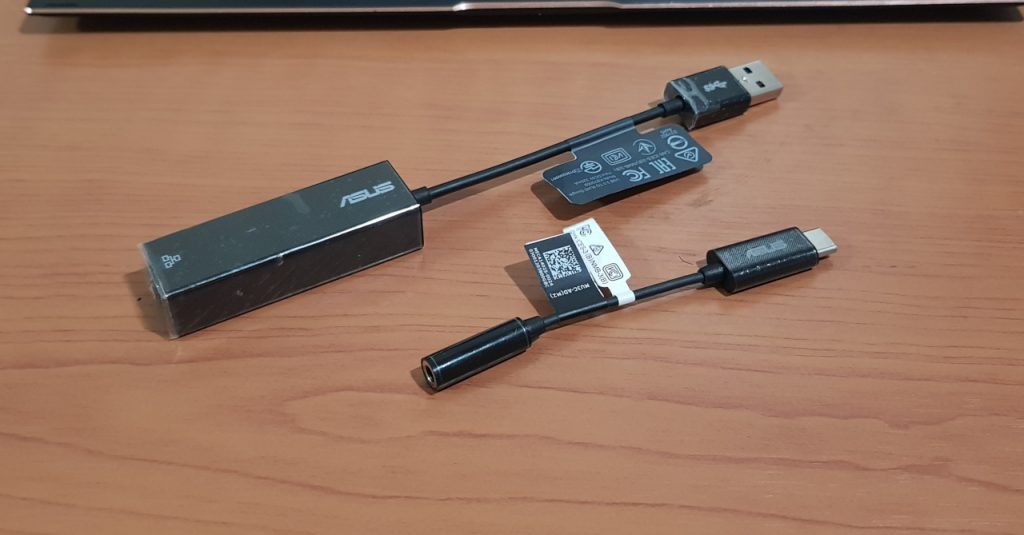 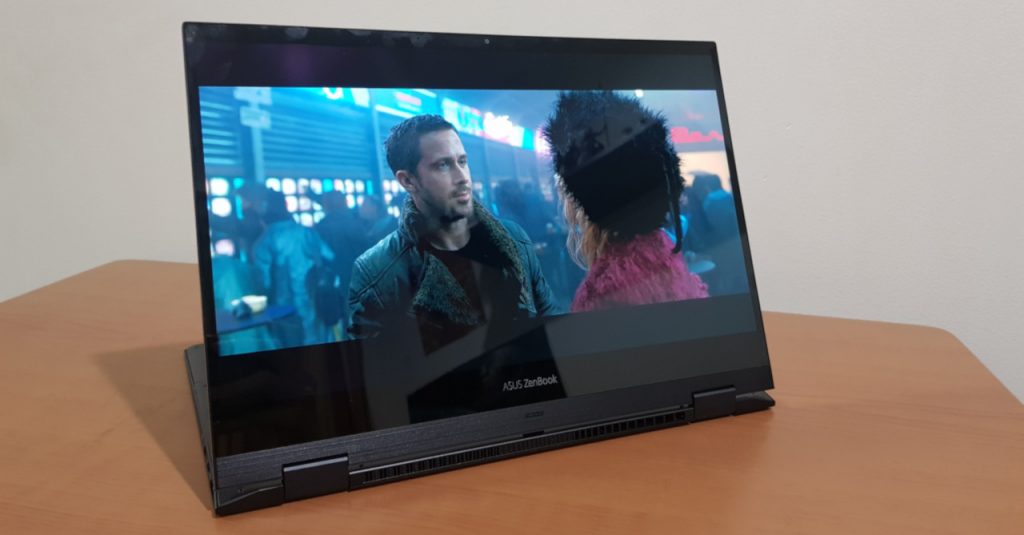 While most ZenBook’s we’ve tested featured 1080p displays, the new Flip S comes packed with a 13.3” 4K UHD NanoEdge touchscreen OLED HDR screen. Thanks to the high resolution and vibrant color output of the OLED display, the ZenBook Flip S is an excellent match for watching movies/TV shows. While the screen is fairly small, it’s still a great device to binge-watch on. 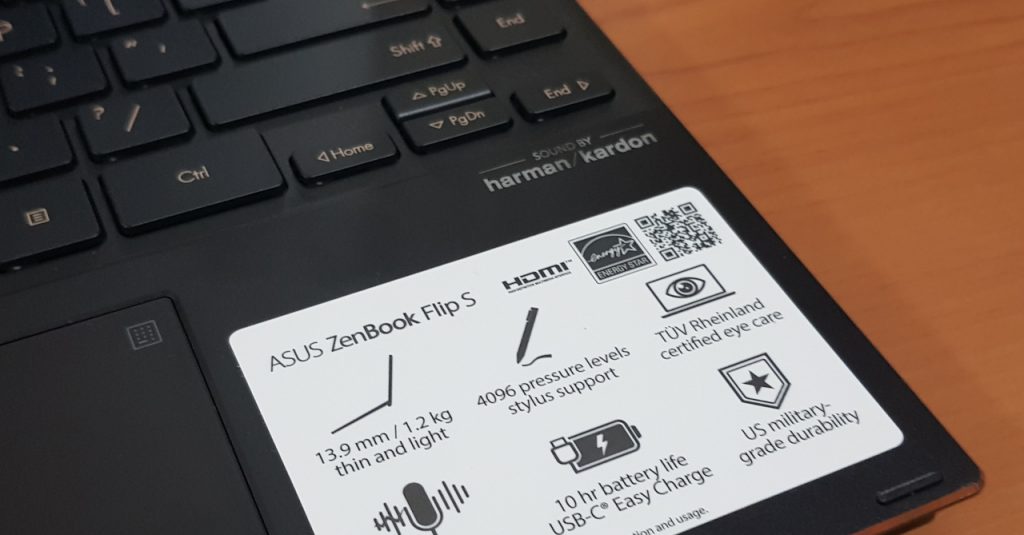 Similar to other ASUS premium notebooks, the Flip S comes with onboard speakers that are tuned by Harman/Kardon. Because of this, the Flip S’ speakers have decent quality audio output, but as expected, they don’t get too loud. This means users should get speakers/headphones for the optimal viewing/listening experience. Still, if you don’t have an external audio device on hand, the speakers are fine enough; just make sure you’re in a fairly quiet room. 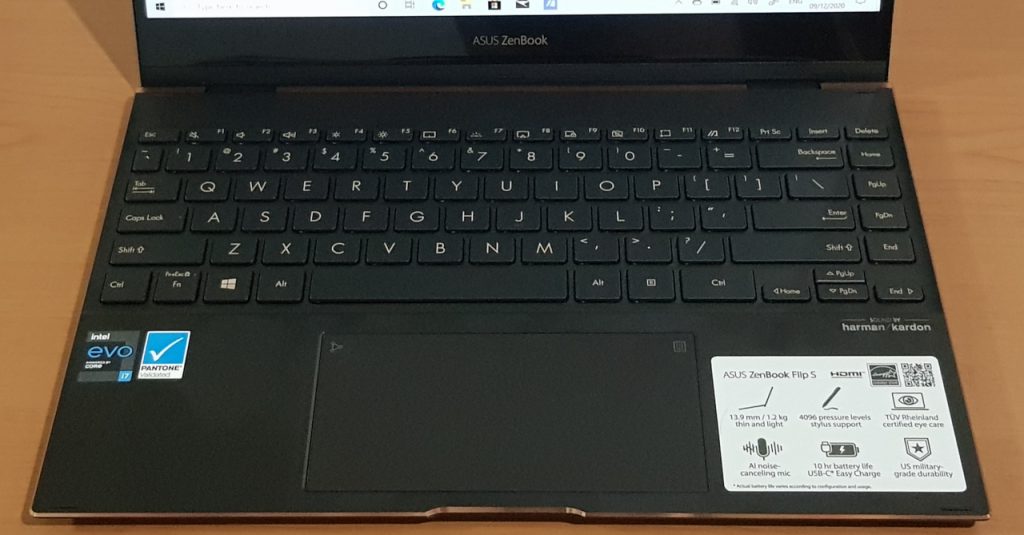 As an ultraportable laptop, the Flip S has a tenkyeless keyboard. While I expected the keyboard to feel cramped to type on, to my surprise, typing on it was quite comfortable thanks to the decently-sized and well-spaced keys. Plus, the keys themselves have a nice tactile feel for a membrane keyboard. 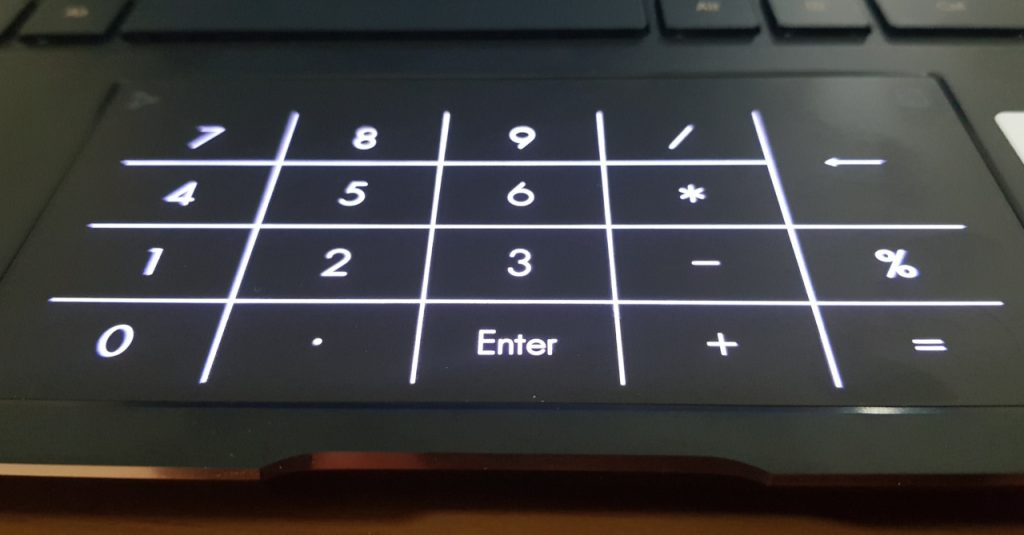 To make up for the lack of a dedicated number pad, the ZenBook Flip S comes with ASUS’ proprietary Number Pad 2.0, a numpad that’s integrated with the laptop’s touchpad. Thanks to this, users who work with a lot of numbers will have an easier time. For users who don’t need a numpad though, the Number Pad 2.0 can easily be switched off by holding the top right part of the touchpad. 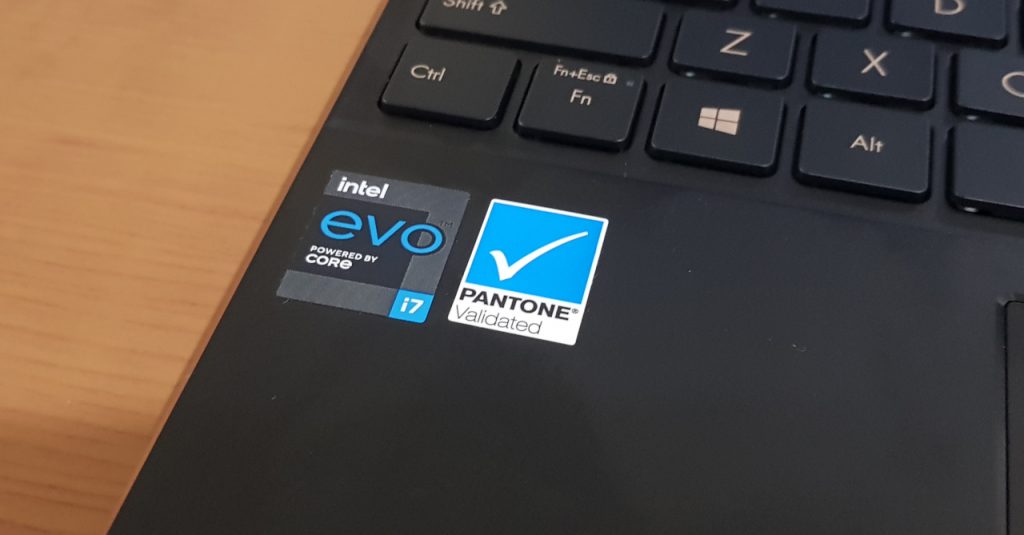 The new ZenBook Flip S is a laptop in the new Intel Evo platform, meaning it is powered by the latest 11th gen Intel Core i7 processor with an Intel X integrated graphics card. This powerful processor is paired with 16GB of RAM, making for a potent combo. But does it have enough power for gaming? 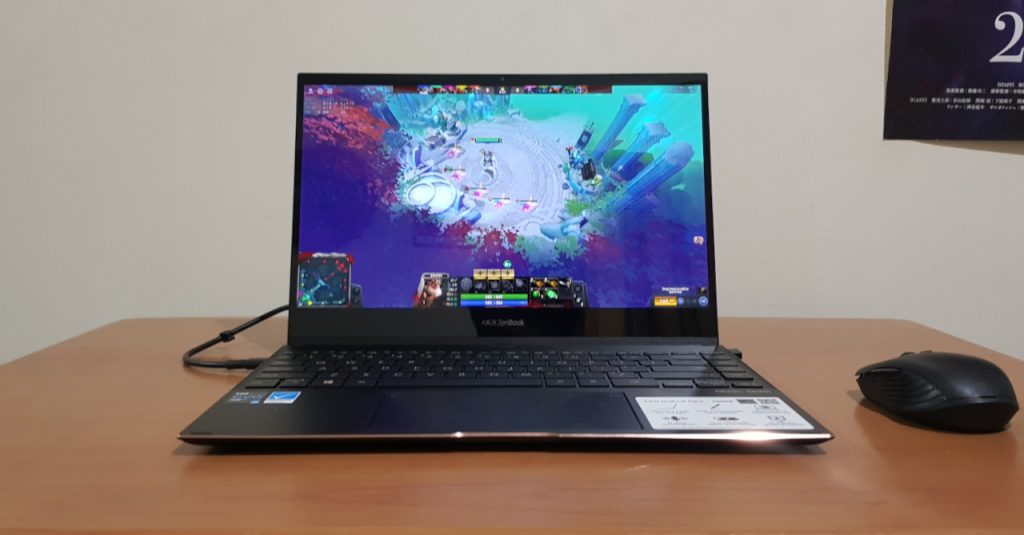 While the ZenBook Flip S is not a gaming laptop, it is able to run some less-demanding title such as Dota 2. In fact, the Flip S can run Dota 2 at Low and at 60FPS (with some dips here and there) at 4K resolution. If you turn down the resolution to 1080p, the game performs at an average of 100FPS.

While you shouldn’t expect to run triple-A games on it, the Flip S should still satisfy for less demanding and more casual games.

Given that the Flip S had enough power to run Dota 2 even at 4K, it should come as no surprise that this new ZenBook is a great performer for everyday use. Whether browsing, working on documents/presentations, or even running creative apps such as Photoshop, the Flip S is able to handle them with ease.

Even with the power under its hood, the Flip S has quite a long battery life. After playing a 2 and 1/2 hour movie at 50% brightness and volume, the Flip S still had 74% battery life remaining–that’s around 8 hours of use. Thanks to this, you won’t have to reach for your charger anytime you’re outside with the Flip S. 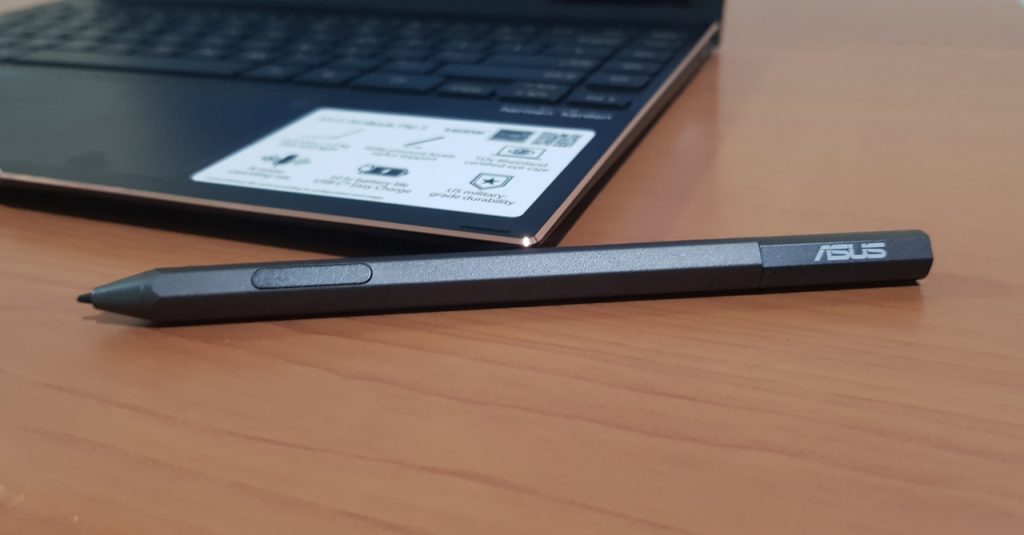 While the everyday reliability of the Flip S is on par with other ZenBook laptops, what makes the Flip S unique is that it comes with an ASUS Stylus. This stylus has 4096 pressure levels, meaning it should be great for drawing and content creation. So does it deliver? Yes, for the most part. 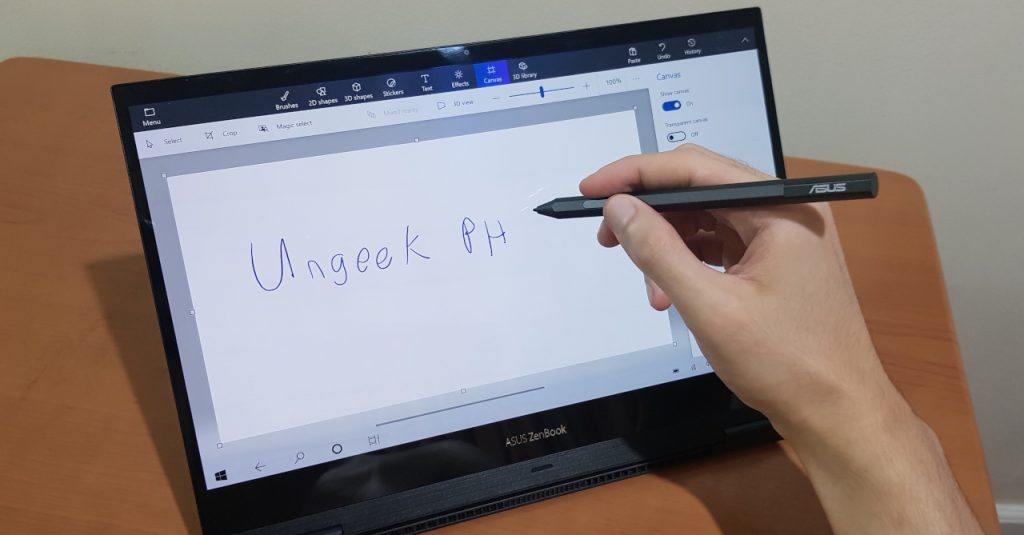 Thanks to the pressure sensitivity of the stylus, artists should be able to draw well on the Flip S. Though the stylus isn’t perfect as it doesn’t feel as good to draw/scribble on as something like an Apple Pencil or a dedicated drawing tablet. 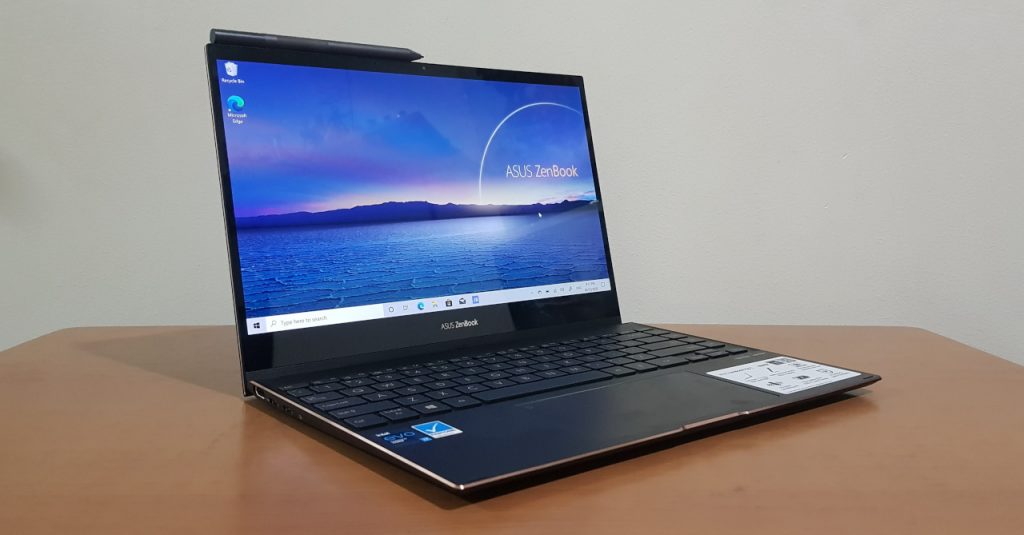 Thanks to its premium build, great display, and powerful hardware, the ZenBook Flip S is a great laptop option. Sure, the laptop’s stylus may not feel as good as dedicated drawing tablets or the Apple Penicl, the fact that the laptop has a nifty convertible design and long battery life makes the Flip S a worthy choice for content creators.

- Advertisement -
Previous article
PS5 shipments reach 3.4 million units in first four weeks, making it the biggest PlayStation launch ever
Next article
The Innsmouth Case for the Nintendo Switch is a unique mix of horror and humor