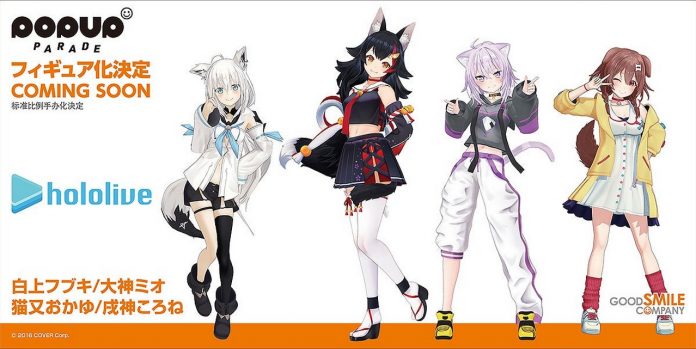 I almost lost my mind (in a good way) when Good Smile announced that they will release Hololive Nendoroids last year. But it seems that Hololive fans and figure collectors have more to be excited for as the popular Vtubers are getting another line of figures from Good Smile company!

The new figures were revealed during the WonHobby 32 online exhibition. There, visitors can visit the site and take a peek at a plethora of new upcoming toys and figurines.

The Pop Up Parade figure line is a new entry of figures by Good Smile that stand at around 17-18 cm in height. They cost less than the standard figures but still retain great detail and quality. Currently, the figure line features characters from popular anime series like Konosuba, The Quintessential Quintuplets, and Kimetsu no Yaiba.

If non-articulated figures aren’t your thing, worry not because during the same event, it was announced that Hololive’s 3rd Generation will join Max Factory’s Figma action figure-line. All 5 members of Hololive Fantasy: Usada Pekora, Shirogane Noel, Houshou Marine, and Shiranui Flare will get a entry on the Figma toy-line.

Along with these announcements, a 1/7 scale figure Houshou Marine by Max Factory was also announced. An image for the unpainted prototype for both Figma Pekora and Marine’s statue were teased.

For more new and upcoming figures, take a peek at everything on display at WonHobby 32’s online exhibition. The exhibit runs from February 11 until February 23, 2021.