The vast desert of Shurima starts with Renekton. 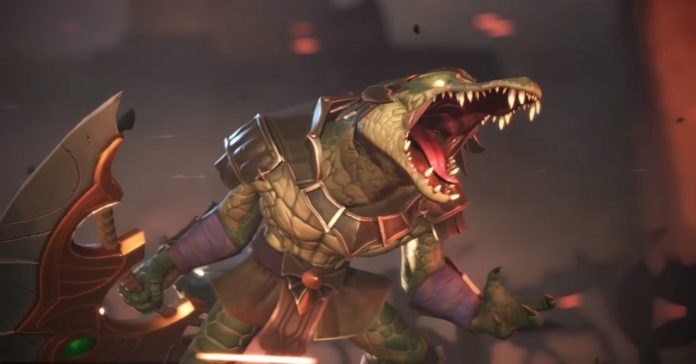 The reveal of Empires of the Ascended expansion for Legends of Runeterra takes us to the mighty desert kingdom of Shurima. And with it, three Shuriman Champions will finally have their card game debut. Among the three who were revealed during the teaser, the first one to be fully revealed is the hulking crocodile, Renekton.

Renekton is a 4 drop Ascended Champion who possesses the Overwhelm keyword with 4/4 stats, and he can further boost his damage by +2/+1 when Challenging enemy units. Now, what makes Renekton unique is the group he belongs to. Ascended champions can level up two times instead of just one by meeting a special condition. Renekton can achieve his first level up when he deals 12+ damage, and he can ascend further when the player restores the new Shuriman landmark called the Sun Disc. This new Landmark synergizes well with a mono Shuriman deck as it can be drawn immediately when all cards are from Shurima.

The Sun Disc may limit his gameplay versatility, but if you plan on not playing a pure Shuriman deck with Renekton, he synergizes very well with regions that have cards which grant Challenger or Vulnerable to drag out enemy units and gain his +2/+1. But once he reaches his Ascended form, Renekton will become a towering beast with 10/10 stats that deals 2 damage to every enemy and the Nexus. So whether you build a mono Shurima deck or spice things up with other region cards, Renekton is definitely an interesting champion.

The Shurima expansion Empires of the Ascended will officially be added to the game on March 3.