A Piano met its end to produce some of Halo: Infinite in-game sounds 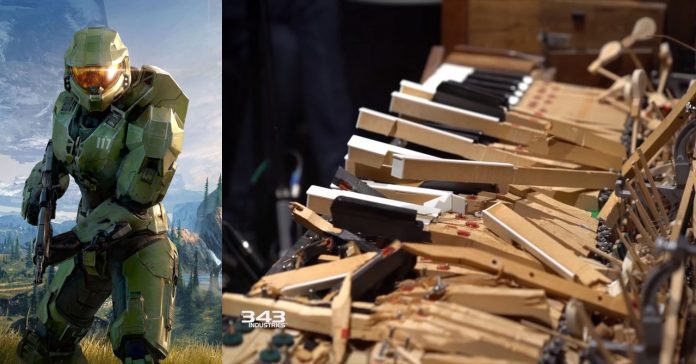 343 Industries recently shared a behind-the-scenes special on how they’re making some of the in-game’s sound effects for Halo Infinite by completely obliterating a piano into pieces. This eccentric method did not only end with just a simple hammer strike, they also introduced the poor instrument to some bat bashing, throwing some blocks at the piano’s keys, and completely cutting its strings, all of which are demonstrated here:

What sparked this idea (revealed in their blog post) was when Lead Sound Designer Kyle Fraser’s friend donated the said piano as she no longer needed it. So, Fraser taking inspiration from the music composer John Cage (known for his methods of composing unique sounds) decided to experiment with the instrument by letting it interact with other objects. The session used 11 microphones with contact mics attached to the piano, allowing them to record the sounds they produced while they were “torturing” the piano.

The violent method yielded not only  “satisfying debris,” but also “eerie sounds of singing, bellowing, and screeching” when they applied dry ice to its strings. This is indeed spine-chilling to hear, as the sound produced gave a fascinating creepy and otherworldly vibe.

Halo Infinite is an upcoming first-person shooter game developed by 343 Industries and published by Xbox Game Studios for Windows, Xbox One, and Xbox Series X/S. It was meant to be launch for the Xbox Series X/S last year, but due to the Pandemic, the release was delayed and is now planned for later in 2021.