Expect countless hours of gameplay with this gem. 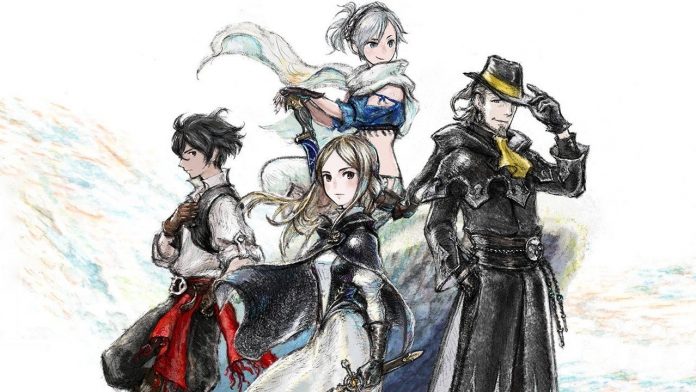 Nowadays, whenever I play a game, I look for two things; a compelling storyline and fast-paced action. This is because, as I approach my “Clooney Years”, I’m starting lose the luxury of time, so I tend to skip playing JRPGs nowadays. But if a game from this genre makes an actual effort to have improved quality-of-life in its gameplay and keeps the whole journey interesting, then an exception can be made. That’s what Bravely Default II just did, despite being grindy at its core, it has gameplay that keeps things interesting and compelled me enough to spend countless hours playing.

Bravely Default II still keeps to its root of a top-down view with dungeon exploration and turn-based battles which is a staple for old JRPGs, but it manages to find a turn around for the “repetitive syndrome”, making every battle feel rewarding. 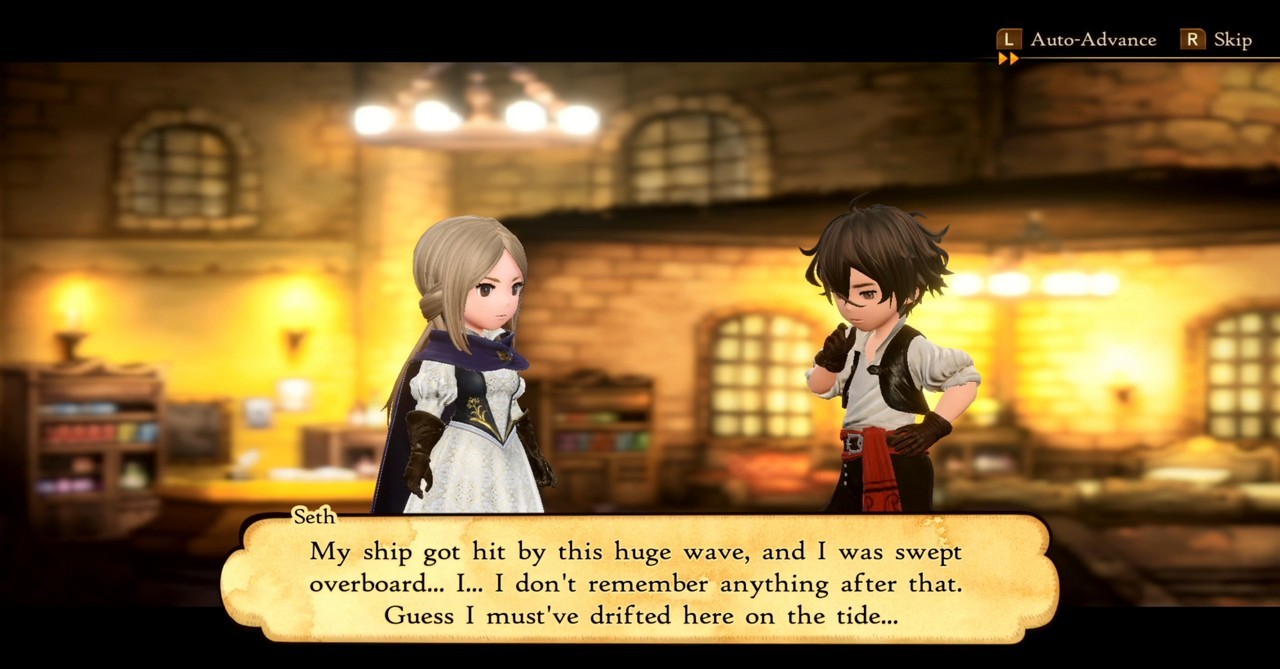 Bravely Default II’s story centers around four characters, each with their own reason why they travel with Seth the Sailor–the main guy whose ship got wrecked by a rough storm. Later, after being washed ashore, he was discovered by Gloria, Princess of Musa whose kingdom was ruined by the power of Crystals and is now on the quest to recover the same crystals before it brings the same calamity to the whole world. Later on, Seth is joined by Elvis, a scholar looking for a way to decipher a book, and his travelling companion Adelle who is looking for her sister. But it seems that these four are meant to meet as the Crystals call them to save the world.

If you think that the whole premise is as JRPG as it gets, you are not wrong as, for me, it definitely gave a Legend of the Dragoon vibe. Bravely Default II’s story has a similar good vs evil premise where it is the main character and his companions’ duty to save the day as the chosen Heroes of Light, and BD II’s approach in storytelling is as straight forward as it can be. It may sound too formulaic in words, but what matters when you tell a story is its delivery, and BD II has its twists and turns that make the whole ride interesting.

What makes things even better is you don’t have to play the original Bravely Default and Bravely Second from the 3DS to enjoy this game as the connection between this and the previous titles won’t make that much of an impact to the experience. 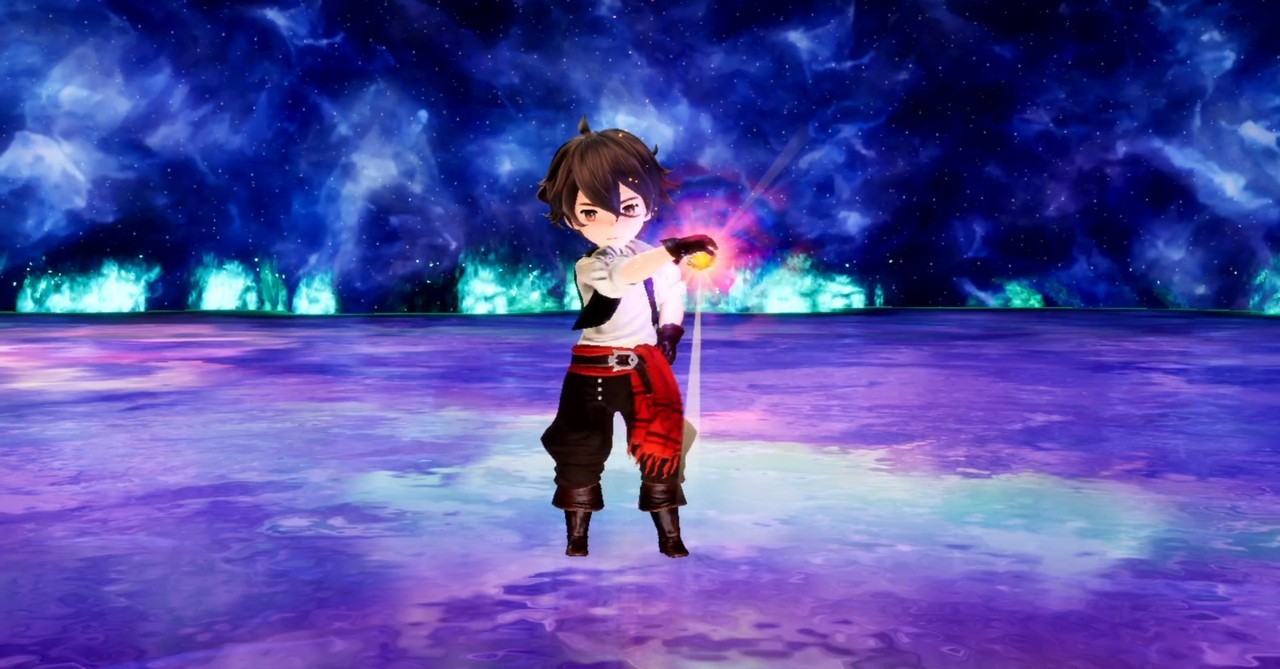 Ok, where to start? It is your job to save the world from the threat of mishandling the Crystals’ power. Fortunately, BD II has tons of Job offerings for your characters. With over 24 Jobs to choose from, you’ll surely find something that will suit your playstyle. But what makes things interesting is that any of your four characters can change their job class anytime outside of combat. By doing so, this will change their base stats accordingly, and besides the character experience points, job classes level up too which unlock new abilities, and each even has its own passive skills that can be equipped to your character.

This system adds a layer of complexity in building your team, with tons of combinations as each character can have two jobs at a time; just keep in mind that only the Main Job will gain Job points after each battle. This means you’re still stuck to a tedious routine of grinding for experience points to achieve your dream team to get through the boss battles. Despite this though, BD II’s battle system keeps things interesting, despite having this same old routine.

Bravely through all odds 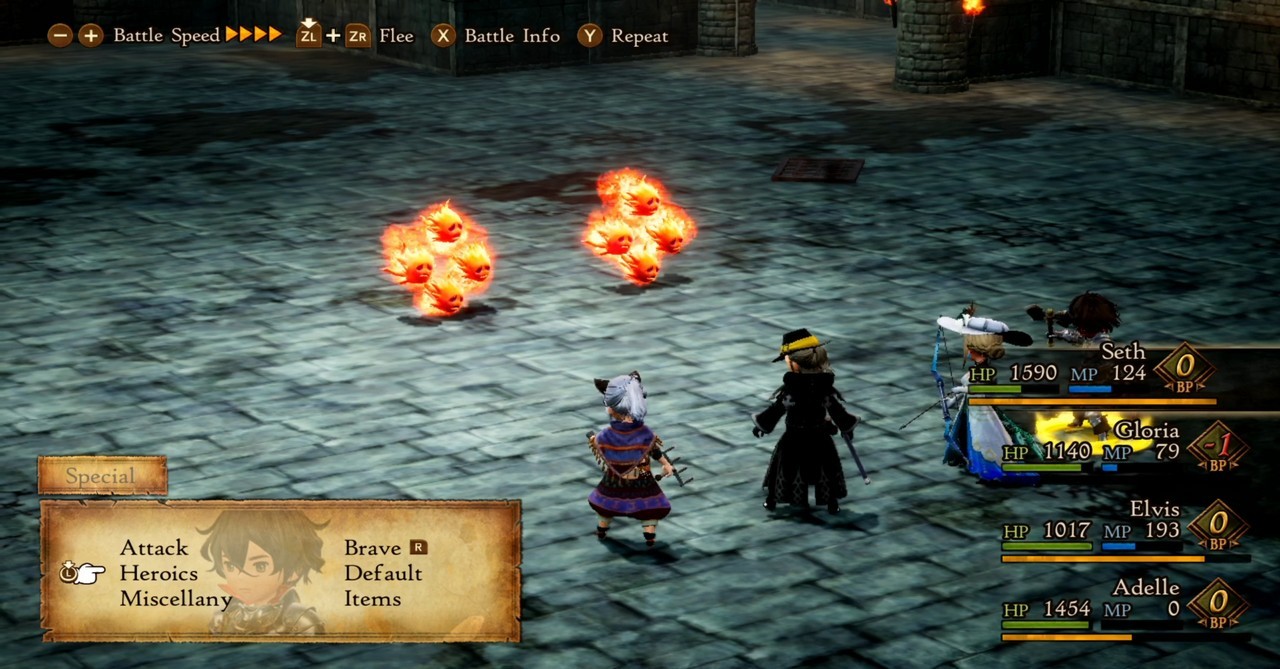 The Bravely Default series is well known for its unique battle system as it will, literally, count your actions, as in each action your character consumes Brave Points (BP) that your character gains every turn. Meanwhile, choosing the Default command will order that character to assume a defensive stance and gain an additional BP. But if you’re truly feeling brave, you can choose the Brave command to consume stored BP or go negative to do multiple actions in one turn. The downside of going negative is your character will become a sitting duck, taking all enemy fire without a care in the world. So not only do you have to think about your current line-up, you also need to choose between going all-in or shielding to bank your turn, knowing the right time to do each action is the key to achieve a smooth victory. 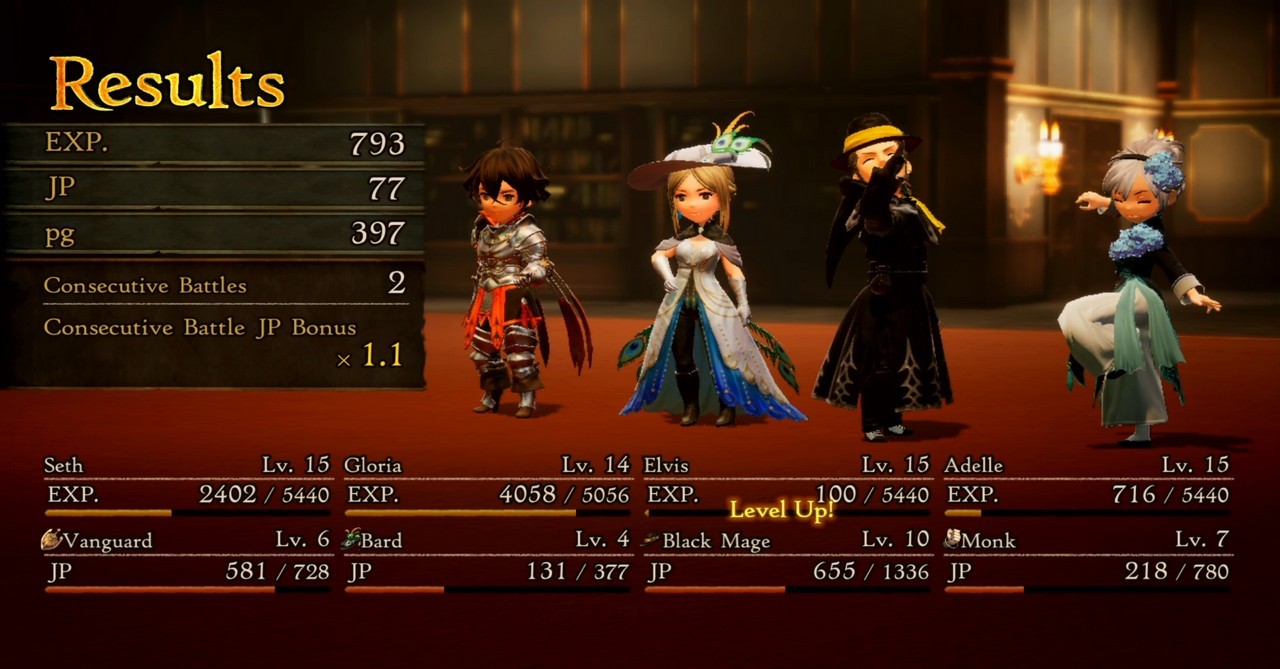 The Brave/Default system gave the right twists to the old turn-based system, but the other thing that I really like about the battle system is the fact that you can change the battle speed up to four times. I know that a few JRPGs have already done this before like Persona 3 Portable and Dragon Quest XI S. As always, adding this option just improves the quality of life and makes it less of a slog to grind. Just admit it, facing a palette-swapped enemy in a different map grinding for experience points can burn you out. So this kind of option is not only a lifesaver, but will also save you lots of time, especially when you’re under-leveled as boss battles in this game are as brutal as they could be.

Painted World and the trouble of its Denizens 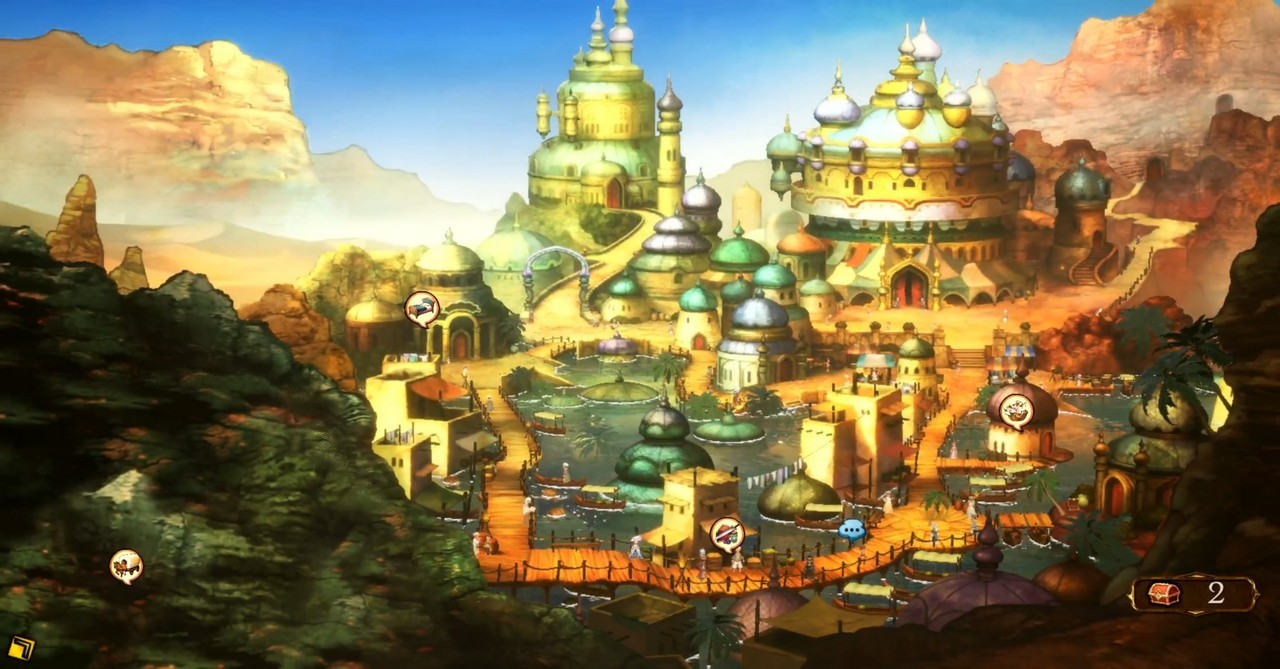 In the visuals deparment, Bravely Default II and its predecessors’ are mixes between hand-drawn backdrops and 3D models. Every town is presented in a 2D design and can be viewed in a panoramic view, so you can tell where the shops and inns are. Meanwhile characters have 3D models venturing around this painted world.

Exploration around dungeons and the world is all in a top-down perspective which is a bit of a problem specially during dungeon crawls as they remove the camera rotation during these explorations. Making things a bit more difficult is the fact that enemy models are all colored depending on their territory, so going off on dungeons while being underprepared can cost you dearly. Another problem that I found is that on the docked mode, the 3D models of each character tend to look a bit flaky on the edges. It’s a bit distracting to look at, but eventually, I just got used to it as the gameplay is just engaging, making this issue minimal.

Although I cannot the same about every side quest. To put it in simple terms, a lot of them are just fetch quests. You might be thinking now that “all JRPGs side quest are all the same so get over it”, but at least a lot of other JRPGs make things interesting by not just sending you back and forth for four times just to relay a message. On the bright side, a few of these side quests yield necessary rewards, but only a few of them are worthy.

Bravely Default II’s story is not groundbreaking and can be as ordinary as it could be, but it was never boring with its lovable characters that support its premise, making for a fun journey. While the grindy nature of it may test your patience, for the most part, the game’s battle system and job system, not to mention the ability to manipulate the battle speed makes gameplay quite fun. While there could be some improvements like making the side quests more interesting things, overall, Bravely Default II is a great pick up for JRPG fans.

Previous article
Xiaomi Mi 11 sells out in the Philippines
Next article
Check out the first 12 minutes of ‘Evangelion: 3.0+1.0’ now

Despite requiring you to invest many hours to its grindy battles, Bravely Default II offers many challenges that give a satisfying sense of reward with its unique battle system. While the story is nothing, new its lovable characters help make it a worth pickup for JRPG fans.Bravely Default II Review | More than just a throwback JRPG