Is the new Legion 5i variant a worthy choice? 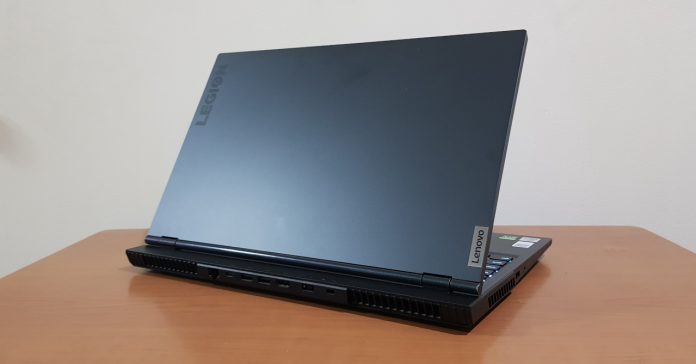 Back in September, we reviewed the Legion 5i, a sleek yet powerful gaming laptop from Lenovo. After testing it out, we were impressed by the 5i as it packed a capable RTX 2060 GPU and an Intel Core i7 CPU, all while having a price tag that’s below PHP 80k.

Of course, there were a couple of compromises, one of which is the lack of RAM. Sure, 8GB of RAM is enough for daily use, but for the best gaming experience, 16GB is a must. Another point of improvement is the storage; the Legion 5i variant we reviewed had a 512GB SSD which might not be enough for today’s massive games. 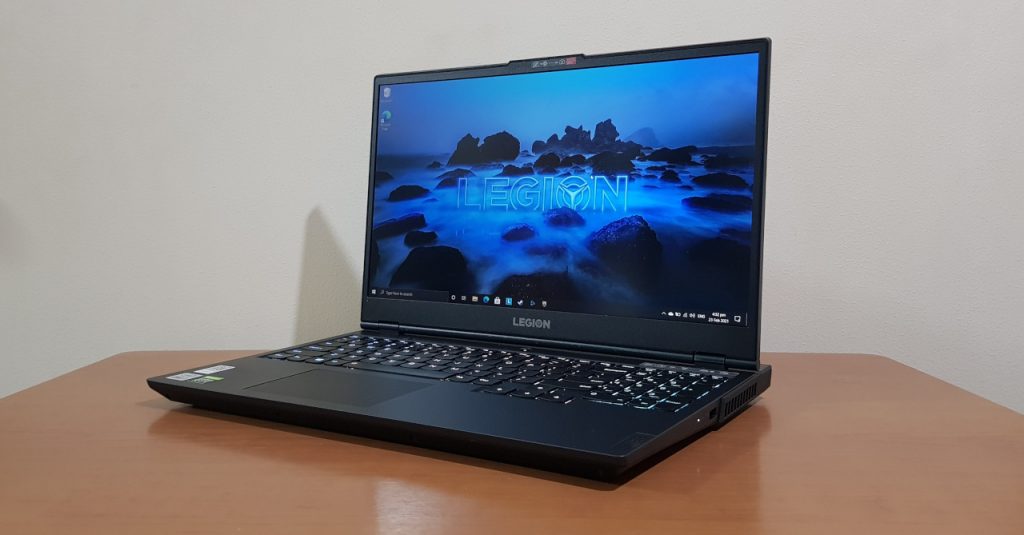 Enter the refreshed Legion 5i (15IMH05H) variant. This new variant may look the same and have similar hardware, but it comes with notable improvements. Not only does this new Legion 5i pack a 1TB SSD, it also comes with 16GB of RAM. To top it all off, the laptop has a 240Hz display–much faster than the previous model’s 120Hz monitor.

Given these improvements, does the refreshed Legion 5i make for an even better option? Find out here in our review!

Take note, this is not a full review. Instead, this will focus more on gaming and everyday performance given that this refreshed 5i is exactly the same as the previous variant in terms of design and other areas. 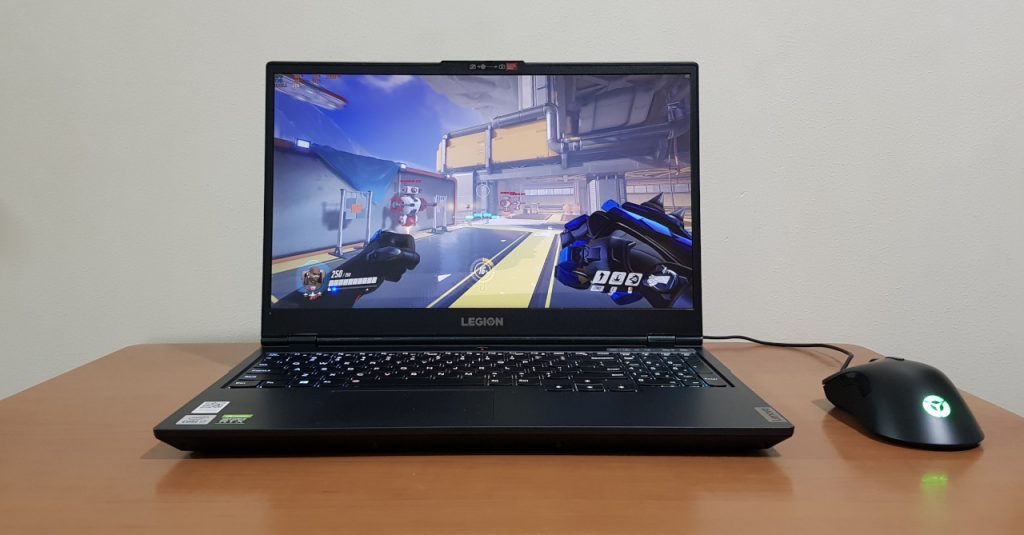 While the refreshed Legion 5i has the same GPU and CPU combo, the increase in memory should help it perform better for gaming. In our test, we first checked out its performance on esports titles. 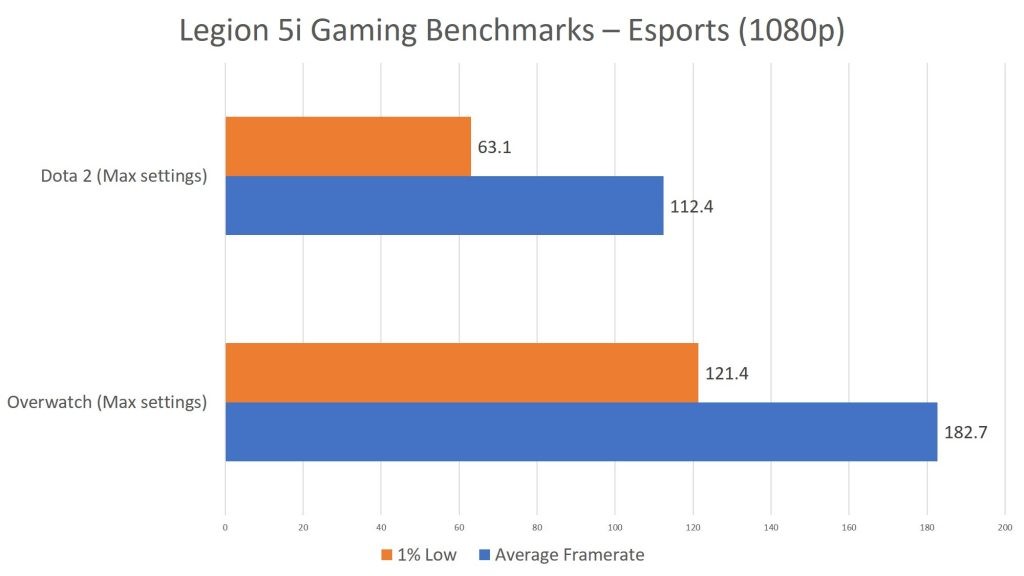 As you can see, Overwatch ran with an average of 182.7 FPS while Dota 2 ran at 112.4 FPS on average; both games are at max graphics settings and at 1080p. this result is a marked improvement over the 8GB RAM variant of the Legion 5i. Thanks to this performance, coupled with the faster 240Hz refresh rate display, the refreshed 5i is an even better partner for esports titles. 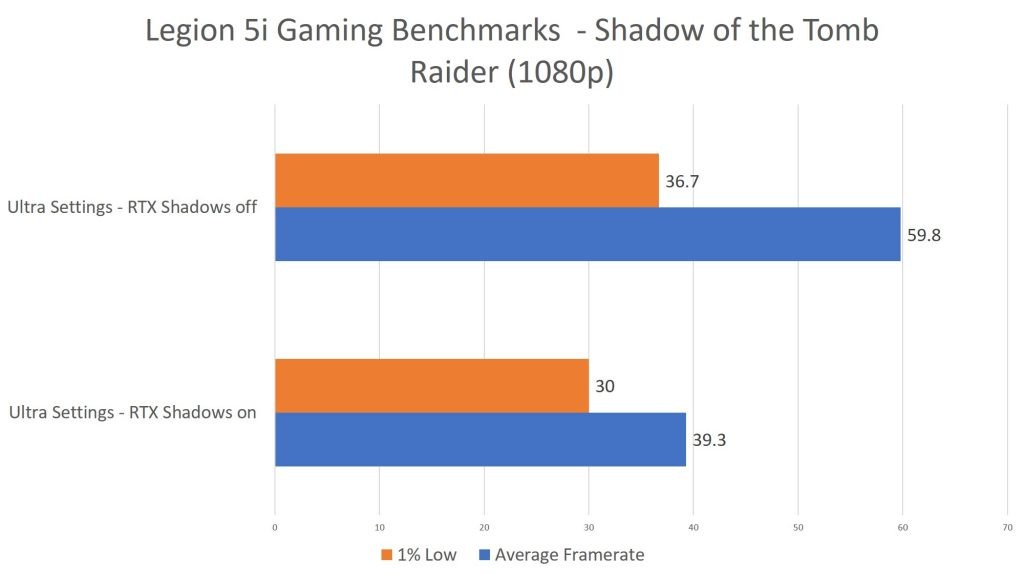 Our next test is triple-A titles, the first of which is Shadow of the Tomb Raider. At the Ultra graphics setting, the game ran with a 59.8 FPS average, with only minimal dips to the 30s. By turning on ray traced shadows though, average framerate dips to 39.3, though it never dipped below 30FPS in our test.

If you plan on playing the game with RTX, make sure to turn down other settings for a better experience. Though this result is pretty good for a laptop less than PHP100k. 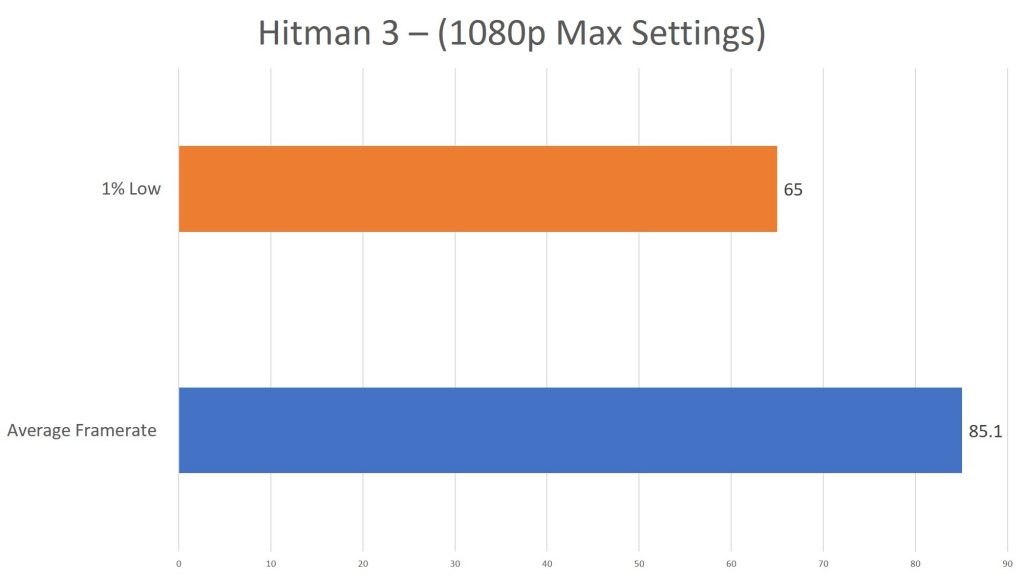 On Hitman 3 meanwhile, the Legion 5i ran the game at a fast 85.1FPS on average at max settings. This means the Legion 5i will have no problems running triple-A games that are less demanding. 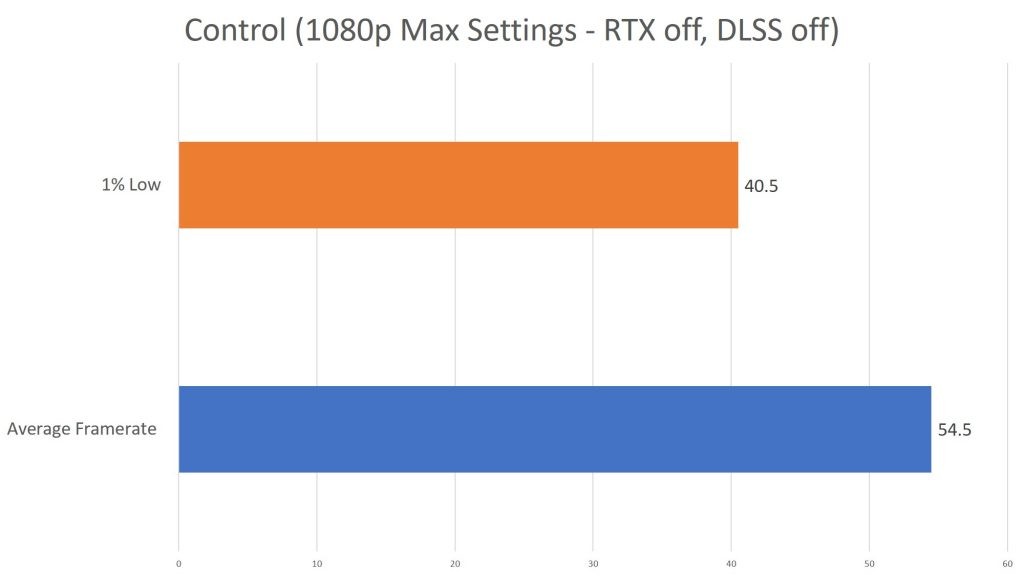 For a more demanding title, we tested out Control. At 1080p and with everything maxed (barring ray tracing), the laptop produced an average of 54.5FPS–a pretty good result for an RTX 2060 laptop. If you want to hit 60FPS on average though, you’ll have to tweak some settings, but it’s definitely doable.

As for ray tracing, we recommend using DLSS at a 720p rendering resolution when running the Medium RTX setting. Even with high graphics, the Legion 5i should produce a smooth 60FPS experience. 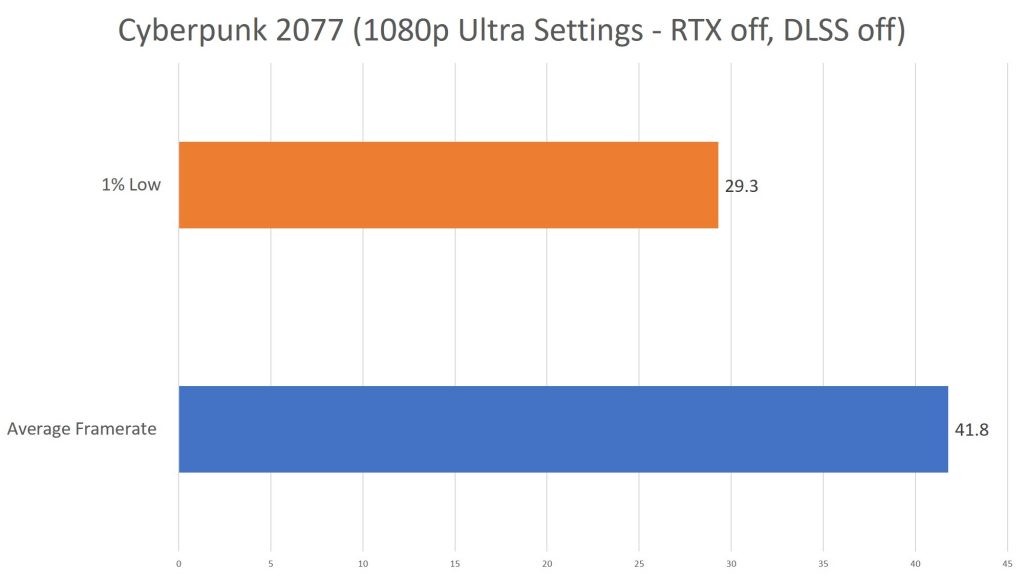 Now we have Cyberpunk 2077, one of the most demanding PC games available right now. Surprisingly, the Legion 5i ran the game with an average of 41.8FPS on the Ultra setting (with RTX off). Of course, turning down the settings a bit is recommended, but the power of the RTX 2060 is quite impressive already for 1080p gaming given this result.

When playing with RTX on, as with Control, turning on DLSS is recommended when playing on the Legion 5i. Though unlike Control, Cyberpunk 2077 will require a bit more fine-tuning given that it’s a more demanding game, especially with ray tracing. 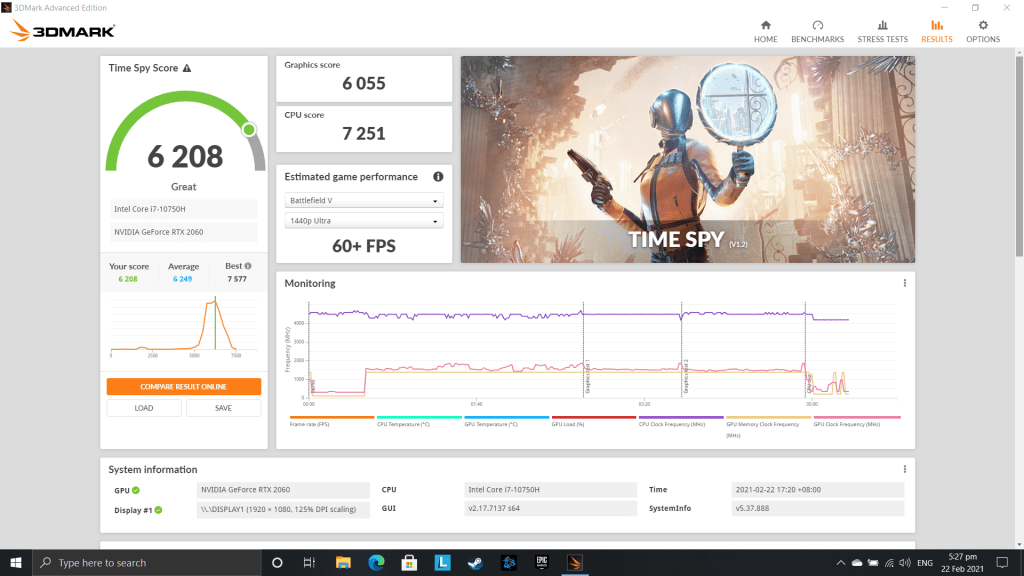 Finally, the refreshed Legion 5i scored 6208 on 3DMark Time Spy, a slightly better result over the previous variant.

One thing to note though is that the Legion 5i does not come with G-SYNC or FreeSync. Though in my time playing, I barely saw any screen tearing while gaming.

While the laptop proved to be capable for gaming, it proved to be even better for everyday use and for productivity. 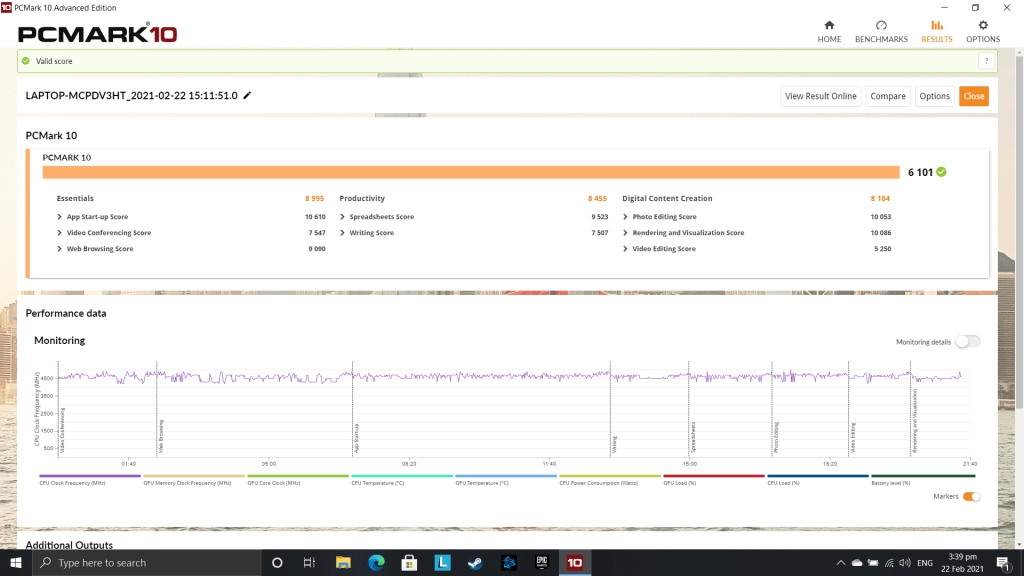 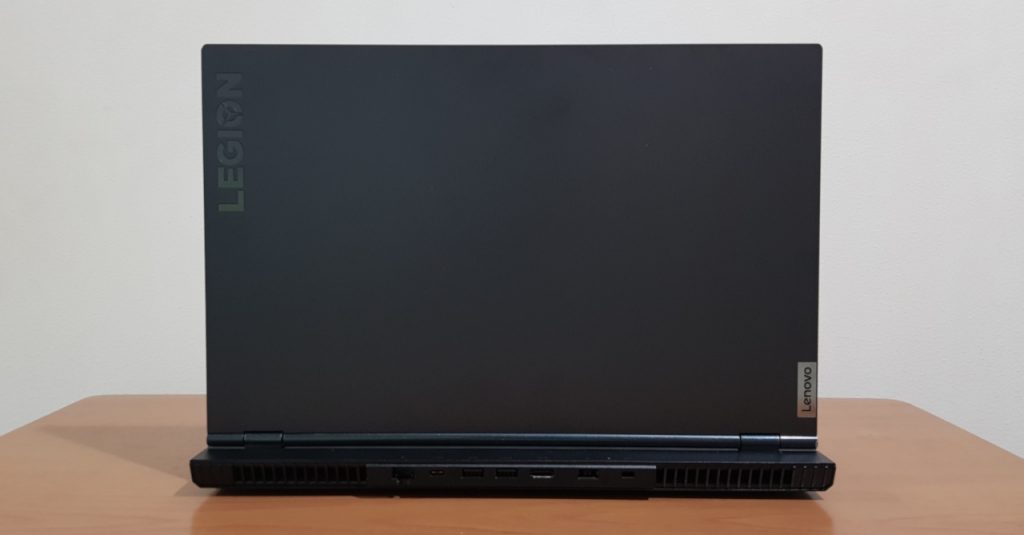 Though the new 5i does take a slight hit in battery life. After playing a 2 and 1/2 hour movie on the Legion 5i at 50% brightness and volume, the laptop had around 44% left. This means the refreshed 5i drains the battery slightly more than the previous model. 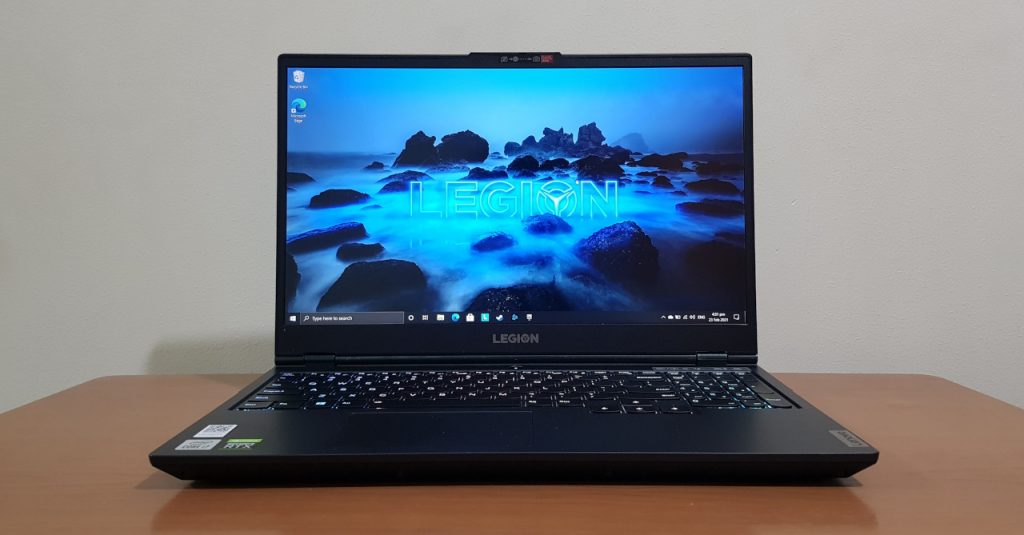 The new Legion 5i variant is a definite improvement over the previous model thanks to the increased performance, both for gaming and for productivity. Even if it has a higher PHP 89,995 price tag and a slightly lower battery life, we believe that it’s worth it given the increase in performance, storage, and refresh rate.

- Advertisement -
Previous article
Get big deals on Huawei devices at today’s 3.3 Sale on Lazada, Shopee, and the Huawei Store
Next article
Robotech: The Macross Saga HD Edition makes a surprise appearance on the Nintendo eShop